Have you read Ayn Rand’s novel Atlas Shrugged? The main theme of the book is that – overwhelmed by growing statism – entrepreneurs at one point say finally “basta!” and announce a strike. They disappear, leaving their businesses to their fate. The symbolic Atlas who carries the world, shrugs. As a result, the economy collapses, plunging the world into chaos.

This what we are observing right now. The workers do not go to work. Shopping malls are closed. Restaurateurs shut down their premises. Theatres, cinemas, gyms, swimming pools – they all are out of service. Other companies reduce their activities or even go dormant. The global economy freezes. The only difference from the Rand’s novel that it is not because of the strike but because of a self-defense effort. People want to protect themselves and others against a contagious pathogen. But the result is the same. The collapse of the economy.

The irony of the situation is that no one – including central banks with their easy monetary policy and governments with their fiscal packages – can do anything about it. This is because this is a health crisis. And the only way to win the battle with the coronavirus is social distancing and quarantine Recession is actually not something we should cry about. We could avoid it, simply letting billions get infected and millions die. The economic lockdown is our only weapon – unless scientists develop a drug or a vaccine – against the pathogen. In a way, this sounds really heroic: we shut down the economy to protect people, especially elderly, from the invisible enemy. However, poetry is beautiful but can be very expensive – the costs of the shutdown are astronomical, trillion dollars per month.

Nobody knows for sure how deep the recession will be as it depends on how the epidemic will evolve (and how the governments respond) – and no one, not even epidemiologists among themselves, cannot determine it with certainty. Goldman Sachs expects the world’s real GDP to be 1.25 percent, a half of 2.5 percent considered a border line of a global recession. The IHS Markit is more pessimistic and expects only 0.7 percent growth for the world economy.

And what about the US? The IHS Markit thinks that the American GDP will fall by 0.2 percent in the whole 2020. Goldman Sachs is more pessimistic here: it says that the US GDP will shrink 24 percent in the Q2, which would be 2.5 times bigger than any decline in history, and 3.8 percent for the full 2020.

But all these forecasts might be still too optimistic. After all, the initial figures from China for January and February were much worse than feared. As the chart below shows, in these two months combined, industrial production fell 13.5 percent, well below of expectations of a 3.0 percent decline. Retail sales plunged 20.5 percent, also below expectations of a 4.0 percent contraction. And fixed asset investment collapsed 24.5 percent, much more than anyone thought.

Chart 1: Industrial production in China from March 2019 to January-February 2020 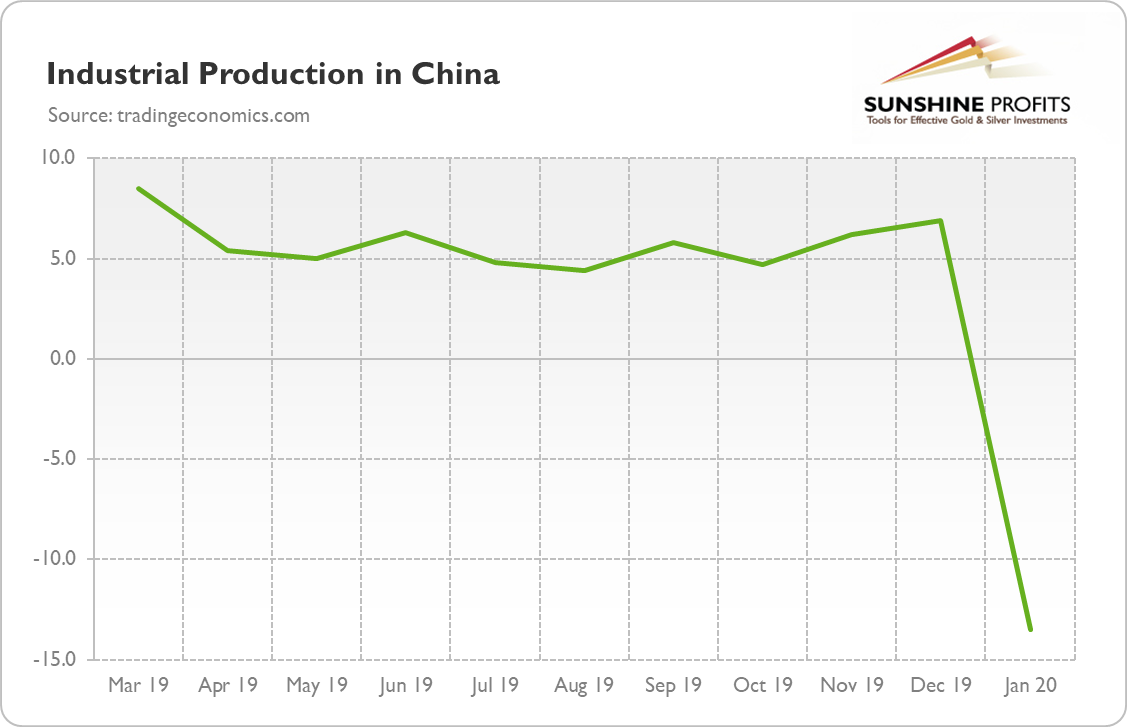 Yes, China imposed more draconian measures than other countries, locking down whole cities and regions. But thanks to these, it has said it already contained the epidemic and would thus enjoy faster recovery than others. Anyhow, a massive negative shock in China in Q1, followed by economic shutdown in Europe, the US and other countries will make this year’s performance the weakest since the Great Recession or even the Great Depression.

Importantly, the chances of a V-shaped recovery – a sharp decline following by an equally strong rebound – are getting lower. Instead, we should expect a U-shaped recovery or even – in some sectors – a L-shaped recovery, which means that we could stay in recessionary territory longer while the recovery will be weaker. This is because we are still several weeks before the epidemiological peak, so the shutdown will last for quite a while. Some companies will go bankrupt and not reopen after the end of epidemic. And consumers do not have to be willing to resume immediately spending and businesses hiring and investments as there might be the second wave of infections, especially if the social distancing and quarantine won’t work its magic.

Another issue is that all hidden problems that were invisible during the economic expansion an bull market – think about excessive indebtedness and zombie companies – will emerge to the surface and further deepen the recession.

What does it all mean for the gold market? Well, from the fundamental perspective, the gold bulls can open champagne. Unless the antiviral drug or vaccine is developed quickly and in a responsible way, the recession will be more severe than most people realize. And the recovery will come later and would be weaker than many analysts think, especially if the debt problem reemerges. Turning off the economy and turning it back on again is not a piece of cake – it’s more like restarting a nuclear reactor. It’s very easy to make a catastrophic mistake here – unfortunately, some countries will commit some kind of error along the way. It times of such a grave crisis, gold should eventually shine.

One thought on “Global Shutdown And Gold”