One of the many bothering issues about the coronavirus crisis, is whether it will turn out to be inflationary or deflationary. What do both of these scenarios mean for gold ahead?

US Inflation Rate Declines in March

Many people are afraid that the coronavirus crisis will spur inflation. After all, the increased demand for food and hygiene products raised the prices of these goods. Moreover, the supply-side disruptions can reduce the availability of many goods, contributing to their increasing prices.

On the other hand, the current crisis results not only from a negative supply shock, but also from a negative demand shock. As a result of uncertainty, people cling to cash and forego unnecessary expenses. In addition, social distancing means reduced household spending on many goods and services, which exerts deflationary pressure. The most prominent example is crude oil, whose price has temporarily dropped to just $20 a barrel (although this was partly due to the lack of agreement between OPEC and Russia). Lower fuel prices will translate into lower CPI inflation rate. Entrepreneurs, especially those with large stocks of goods, will probably lower prices to encourage shopping. Moreover, the appreciation of the US dollar means lower prices of imported goods.

So, the disinflation pressure should prevail in the short term – and indeed, the first inflation readings in America (but also in other Western countries) show a decline in inflation. For example, the

US CPI inflation rate declined 0.4 percent in March, following a 0.1 percent increase in February. It was the largest monthly decline since January 2015. The decrease was mainly driven by a sharp decline in the gasoline prices. However, the core CPI rate, which excludes energy and food prices, also decreased in March – by 0.1 percent (versus 0.2 percent rise in February), which was its first monthly decline since January 2010.

On an annual basis, the overall CPI increased 1.5 percent, which is a notably weaker increase than the 2.3 percent rise in February. The core CPI rose 2.1 percent over the last 12 months, compared to the 2.4 percent increase in the previous month. The chart below shows these disinflationary trends. 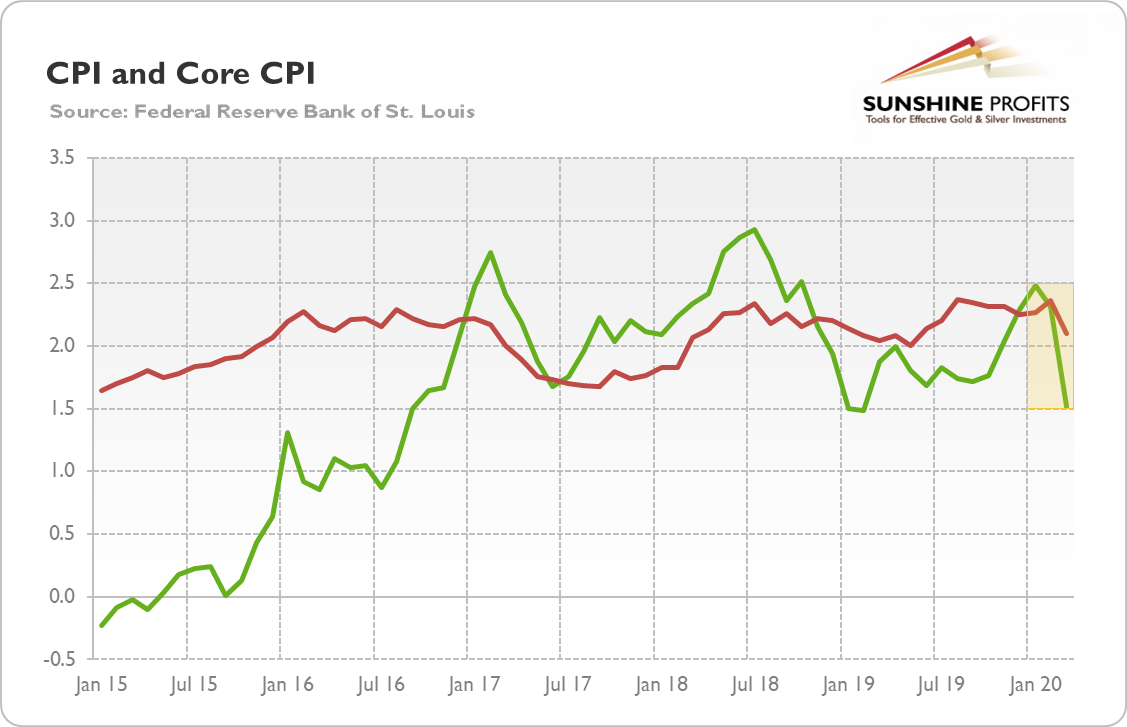 So, Should We Expect Deflation?

No. I’m, of course, perfectly aware that the Great Recession was deflationary, as the CPI inflation rate plunged from 5.5 percent in July 2008 to -1.96 in July 2009. However, this crisis is different from the previous one. Neither during the global financial crisis nor during the Grate Depression did we have a situation where such a large proportion of society does not go to work. So, the global quarantine with the associated limited international trade and broken supply chains imply that the productive capacity of the economy will suffer. And this may result in stagflation rather than deflation.

Moreover, the commercial banks are relatively healthy this time, which means that they are able to extend credit. Please note that this is the core of all emergency programs introduced by the Fed and other central banks all over the world. They encourage commercial banks to grant new loans to companies that have suffered as a result of the coronavirus crisis and social distancing. As the chart below shows, the credit supply in the US has accelerated in March. 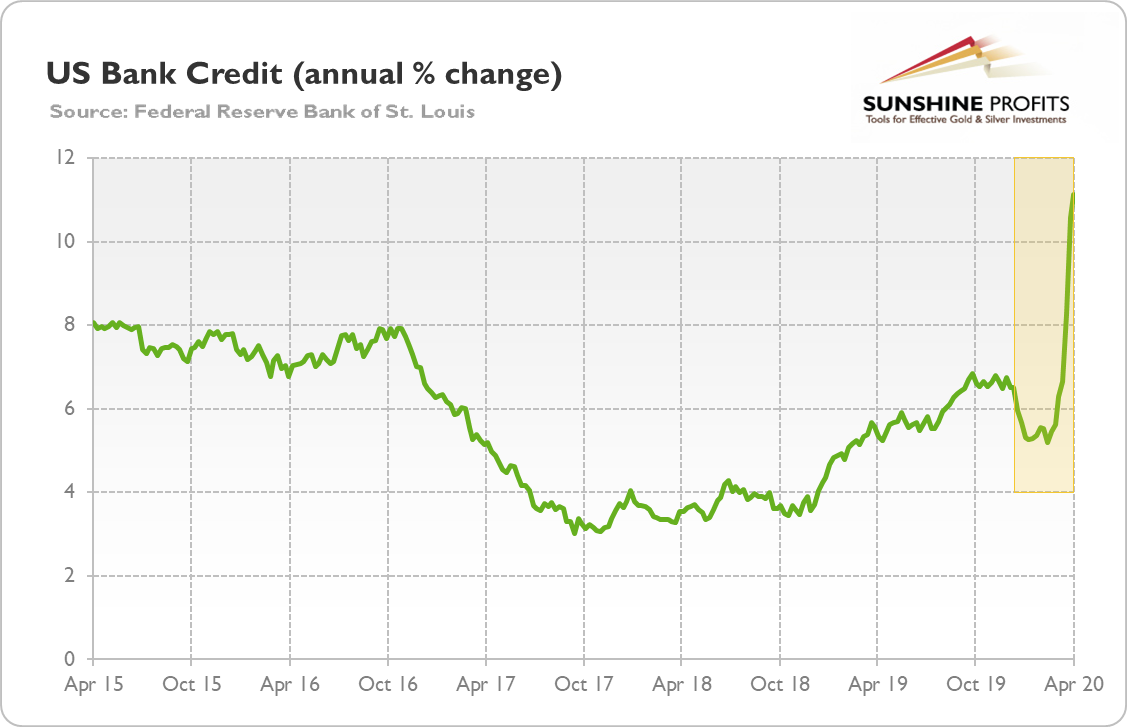 Given that in the contemporary monetary system new money supply is created when commercial banks extend credit, we should not exclude the risk of inflation later in the future, after the initial wave of disinflation.

Another inflationary risk factor in the longer term is the inevitable increase in Federal debt, which may increase the temptation to monetize it or to strengthen the financial repression. It is widely known that the best times for governments to get out of debt is during negative real interest rates.
Therefore, while in the short term the disinflation scenario seems more likely, the risk of stagflation increases in the longer run, especially with too fast lending and excessive monetization of the debt.

What does it all mean for the gold market? Well, those who buy gold mainly as an inflation hedge  do not have to worry about their holdings – inflationary monster should disappear from our economy. Remember the stagflationary 1970s? Gold soared then.

However, even if the US economy plunges into deflation, I have good news. You see, gold is not just about inflation versus deflation. The yellow metal is a safe-haven asset which may shine during both inflationary and deflationary periods. After all, gold also rallied in the aftermath of the Lehman Brothers’ bankruptcy, when the economy plunged into deflation for a while. Why? Well, gold’s price is also sensitive to market sentiment and risk aversion. Then, gold is no one’s liability. So, when deflation is accompanied by significant economic worries and a loss of confidence in the US dollar, gold may shine. Anyway, gold’s future – in a world of negative real interest rates, elevated risk aversion and high public debt – looks bright.

2 thoughts on “Does Gold Really Care Whether Coronavirus Brings Us Deflation Or Inflation?”