Skip to content
HomeIf There Are No Bulls, Who Are The Buyers?
By Rick Ackerman – Re-Blogged From Silver Phoenix

The news media and the pundits flailed around over the weekend trying to come up with reasons why the broad averages have rallied to within 10%-20% of record highs even though the global economy could be headed into a depression. ZeroHedge is usually able to provide plausible answers to such questions, but here’s an attempt that fell short. It places commodity trading advisors at the center of the action: “CTAs, which are computer-driven models, do not care about such trivial facts as mass layoffs, millions of people infected with a deadly virus, and instead they only care if others are buying at which point they too join the buying frenzy.” 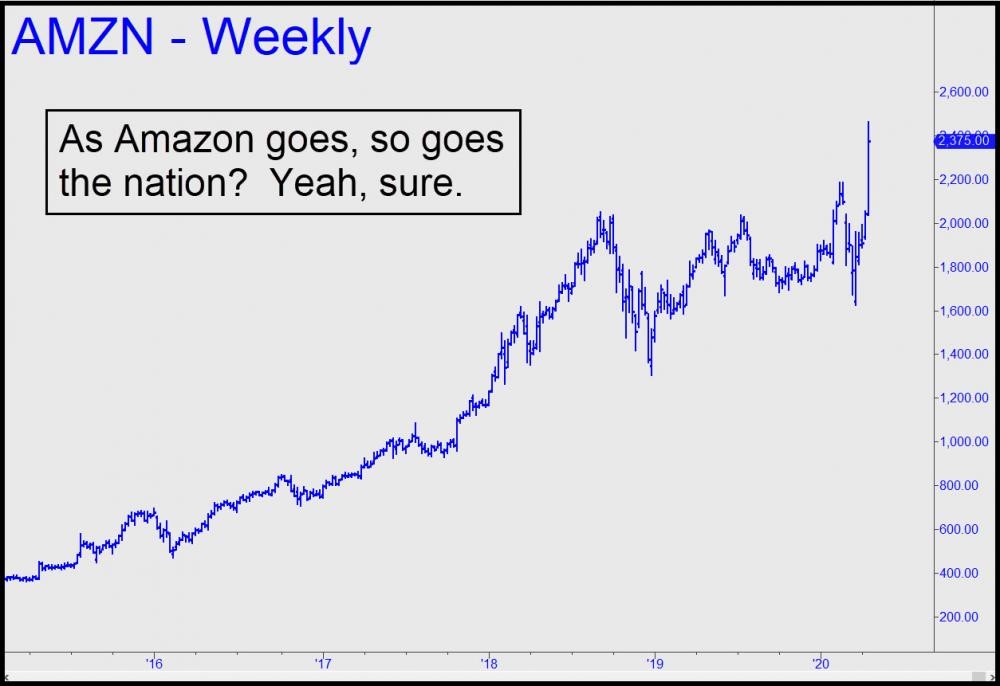 I agree that CTAs don’t care about facts, even world-changing ones. I also agree with the author’s prediction that stocks eventually will fall much, much lower. But who are the “others” he says are attracting momentum players? And how could they rally stocks with sufficient vigor to not only overcome intense hedge-fund selling, but to build velocity against it? Surely they are not simply bullish buyers, as a Nomura quant quoted in the article seemed to imply. It taxes the imagination to think anyone could be bullish these days, with fallout from the pandemic threatening to inundate the economic world. Even financial advisors who have been telling clients to sit tight could not be so foolish as to think stocks are actually a buy at these levels, could they?

So who’s doing the buying, and why? There is just one, simple answer: short-covering bears, many of whom have been getting crushed by margin calls. I’ve always insisted that merely bullish buying is never sufficient to drive stocks through prior peaks and supply zones, even during bull markets. But short-covering can, and does, with power that correlates inversely with bearish sentiment at any given time. How else to explain the vertical recovery of Tesla shares, which have more than doubled since bottoming on March 23 at $350; and of Hyatt stock, which has bounced to $57 after bottoming last month at $24. We shouldn’t be too surprised if Carnival stock catches fire now that the cruise line has been threatened with lawsuits by passengers alleging the company didn’t clamp down on the fun soon enough.

Investors could feel the same way someday. For now, though, leave it to the ‘experts’ to tell us these rallies are caused by buyers looking past all the bad news. What rubbish! Here’s what’s actually going on: Think of bears covering short positions as the source of nearly all of the buying. They have been shorting the rally with increasing boldness every inch of the way, and if they thought the S&P 500 was a great short at 2400, you can bet they see it as an even juicier short near 2900, where it is currently trading. That kind of thinking has brought only devastation so far, including an estimated $108 billion loss when the S&Ps rallied 18% over a three-day period in March. They evidently have learned nothing, since the bets bears piled against the S&P 500 ETF last week totaled $68 billion, the highest level since the statistic was first formulated in 2016.

Perhaps bears would be less bold if they stopped to consider who is on the other side of the bet. Warren Buffett, for one — the best proxy we have for Smart Money. The Sage of Omaha, who recently held a $72 billion (!) position in Apple shares, obviously knows that dumping the stock would be self-defeating. So he has lightened his offers and let AAPL waft higher, distributing as many shares as he can whenever sizeable bids appear. This is how he and other big investors are unloading into the squeeze without sending stocks into retreat. It also describes what is happening to the stock market as a whole. AMZN and NFLX are icing on the cake, since both were hitting new all-time highs last week as they pulled the FAANGs higher.

This will continue until the last bear has been liquidated, sliced and diced. With no support from short-covering, stocks will start to fall, quickening in tempo when program trading kicks in. Circuit-breakers will give sellers fixed levels to pound on, the better to temporarily deplete them so that mini-short squeezes can occur from time to time.  The next major bear rally will not be as powerful as this one because more investors will be eager to get out.  Their financial advisors will still be telling them to sit tight, but fewer clients will believe the sales pitch. It is predictable that the bear market will end with the capitulation of those who are most bullish now. Jot down a few of their names and you can’t go far wrong.

One thought on “If There Are No Bulls, Who Are The Buyers?”