The price of gold has been up steadily for the last 30 days (with a few zigs and zags), now re-attaining the high it achieved prior to the big drop in March. Gold ended the week at $1,662. Alas, it’s not quite the same story in silver, whose price drop was bigger. Now its price blip is smaller. Silver ended the week at $15.19.

One does not need to look to the gold-silver ratio, which is currently off the charts, to see that the world has gone mad. Silver, it has long been understood, has both industrial as well as monetary demand. With the plunge in economic activity of all kinds due to the response to the coronavirus, the industrial component of silver demand is drastically reduced.

As an aside, we feel compelled to say that many lives will be lost by impoverishing people. This is an iron law of economics. There is no way to work around it. If you give them subsidies, you are just taking precious capital from those who are still solvent to feed those who are insolvent and jobless. One needs capital to employ someone, so by depleting the capital of those who are still solvent, the would-be do-gooder government ends up plunging more people into jobless poverty.

The Modern Monetary Theory cranks are proposing, you guessed it, printing money to solve all of these problems, and more. Some of them are now calling us cranks, not having an answer to our charge of capital consumption.

The price of oil is continuing its epic collapse. It ended the week well under $20. And today as we wrap this report, it is around $11. Yes, that’s right, an ounce of silver will buy about a barrel and a half of oil (and you thought silver was cheap)!

We have no opinion whether oil can drop more, or whether it has overshot. However, we would look now for copper (and other commodities) to catch down. With people locked down and not commuting to work or going on vacations or even to the amusement parks and sports stadiums, they are driving less. Hence lower demand for oil. Hence lower oil prices. This also means lower demand to buy new cars. Not to mention that many dealerships are closed by government orders, and that unemployed people don’t buy new cars.

Across the parking lot from our offices, they were about to break ground on a new hotel. They cleared the lot, put a fence around it, and set up some construction management trailers. Now the site lies abandoned.

Notwithstanding the free money (well, dollars anyways) doled out by the government, both to consumers and the forgivable loans to businesses, where will demand come from for oil, steel, copper, cement, and all the other things that people were buying (on credit) prior to the lockdown?

We prefer to look at the prices of raw commodities, rather than finished goods at retail, to best understand the effects of monetary policy and its positive feedback loops with resonance. That’s because the manufacture and distribution of goods are subject to innumerable regulations, which force companies to add what we call useless ingredients.

For example, gasoline in the US is subject to a byzantine regime that includes different formulas mandated by each state. Building a new pipeline is highly politicized, and hence in many cases there is a shortage of capacity. So a breakdown could cause a localized spike in the price of gas. And the burden of compliance causes much higher prices across the country.

Regulation mandates many costly activities that are not well understood, for example, the change in formula in the spring and back again in the fall. What does it cost the refiners to retool twice a year, not to mention either let inventories dwindle to zero, store unsalable inventory, or waste it?

The production of crude also has mandatory useless ingredients, but more and more pile up as you go downstream from there.

What has not set in yet, is the magnitude of the losses. Clearly, many oil producers cannot service (much less repay) their debts with oil under $20. And many car dealerships, restaurants, and other businesses, closed by government decree, can’t service theirs. And many unemployed workers cannot pay theirs. The question is how quickly the banking system reckons with it. We are not accountants, but we understand that when a debtor does not pay, the receivable goes through an aging process. First, it’s 30 days past due. Then 60. Then 90. Then the fun begins, as the debt has to be written down (or written off).

Speaking of unemployment, 22 million Americans have filed unemployment claims over the past four weeks. That’s almost 15% of those who were working prior to the virus. Countless more are working fewer hours and/or making less per hour. And this does not count business owners who currently have no revenue (but who are not eligible for unemployment), nor investors who are losing their investments.

This is a depression.

It cannot be corrected by socialist fiscal or monetary schemes. Doling out your capital as income to be consumed by others will not rectify the underlying problem. Nor will lending more, at lower interest rates. At best, these schemes will juice up another boom (though we are skeptical this could occur so quickly after the bust, much less during a lockdown).

Back to gold, we have said that two things explain the incredibly high gold basis (calculated, in essence, as future price minus spot price). One is that speculators are bidding up futures contracts (the opposite of the “price disconnect of paper and physical metal” described by many gold bugs). The other is that, due to scarcity of credit, the banks are unable to arbitrage this spread. Normally, they borrow dollars to buy gold and simultaneously sell a futures contract. They store the gold in the meantime, and pocket the basis spread. 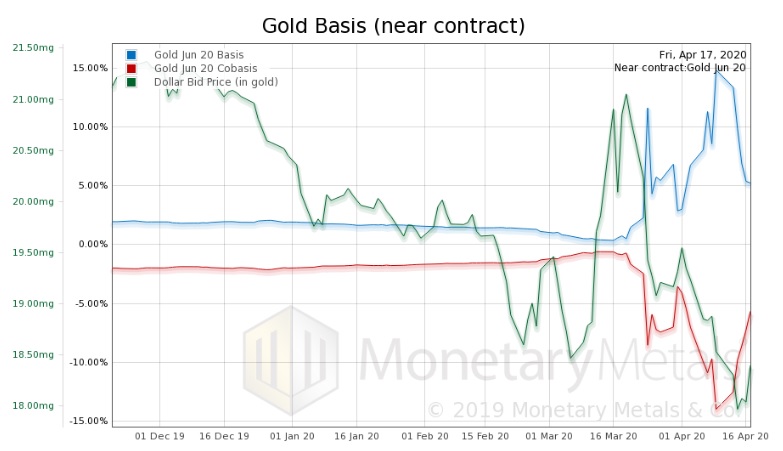 This chart clearly shows the incredible rise of the basis, which spiked to just under 15% on April 9. It is now back down to around 5%. A normal value would be more like 1% or less.

To put that in perspective, at the peak, the profit to be made by buying spot at the offer price, and selling the June contract on the bid price, was $51. Whereas, on March 16 just prior to the crisis, it was $1.48.

Along with the blowout in the basis, something similar happened to the bid-ask spread in spot gold. This, too, is coming back down, though still elevated. 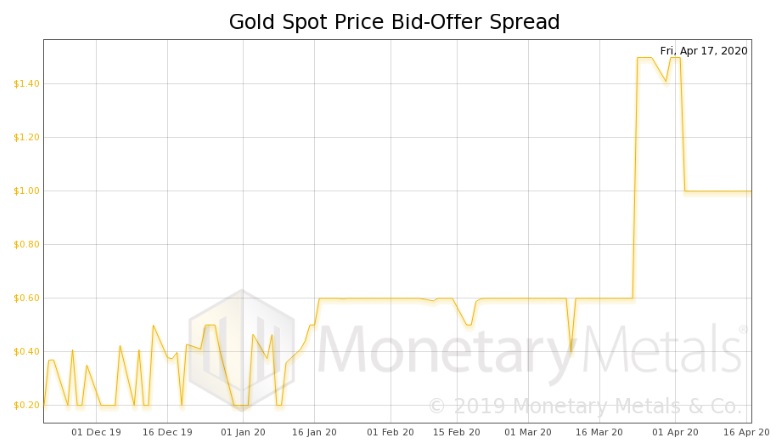 According to the World Gold Council’s John Reade, in comments he made to Bloomberg, there is another factor. Logistics disruptions make banks wary of carrying gold. This is due to the mechanics of the trade: you are buying 400oz bars in London and selling 100oz contracts in New York. The concern is not a shortage of gold, per se. It is disruption in the capacity to melt a 400oz bar to cast four 100oz bars (or twelve kilobars) for delivery in New York.

Interestingly, the extraordinarily high basis has caused the calculated Monetary Metals Gold Fundamental Price to crash. It hit $1,095 on March 24 before shooting back up to mostly recover. It is $1,643 on Friday. This is an artifact of the anomalous spike in the basis. 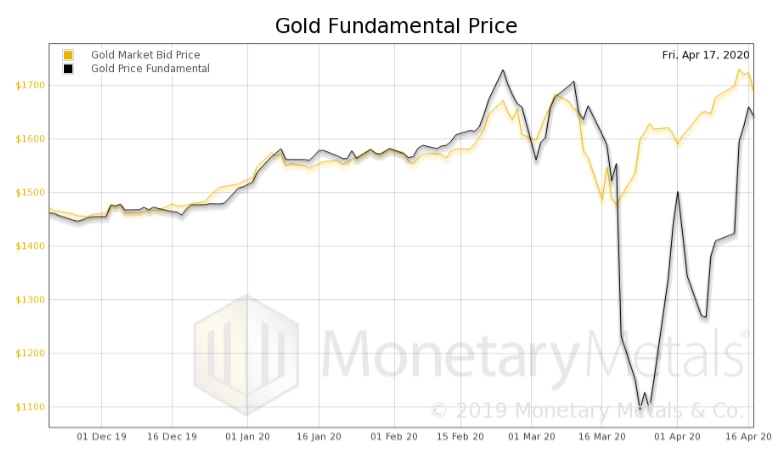 Another item in the news this week, the US Mint announced it was closing a plant that manufactures gold Eagles. A real shortage is developing, not in gold metal per se (virtually all of the gold ever mined in human history is still in human hands), but in the coins preferred by retail gold buyers.

The premium offered to anyone with coins to sell is already much higher than it was a few months ago, and could rise further. Normally, there is no good way to take advantage of this for most people. If you sell your gold, then you are stuck holding paper dollars. Monetary Metals has a way for investors to earn that premium, and keep their gold (please contact us if you’re interested).

Finally, let’s look at silver. Silver, in the best of times, is less liquid. 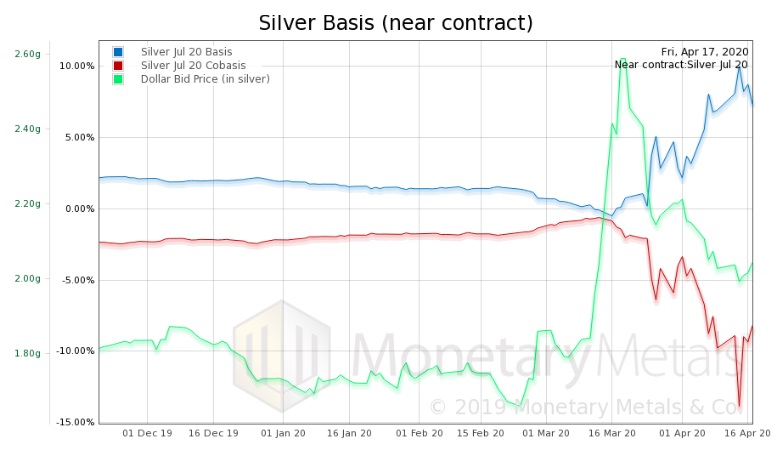 It’s starting to come down, but the basis is still around 7% (31 cents an ounce to buy silver metal and sell a July contract).

We are living in interesting times. And an exciting time in the gold and silver metals business (we are seeing growth in both investment and leasing demand).

One thought on “Gold, Crouching Silver And Hidden Oil Market”