The US stock market is once again in imminent danger of a major collapse. The disturbing daily chart of the Dow Index.

A rally towards resistance has taken the shape of a bear wedge. The rally failed to even reach that resistance zone, and now there’s an ominous breakout to the downside.

The US government has embraced socialism for almost every sector of the economy, except medical care for the nation’s elderly and most vulnerable citizens… during a major virus crisis! 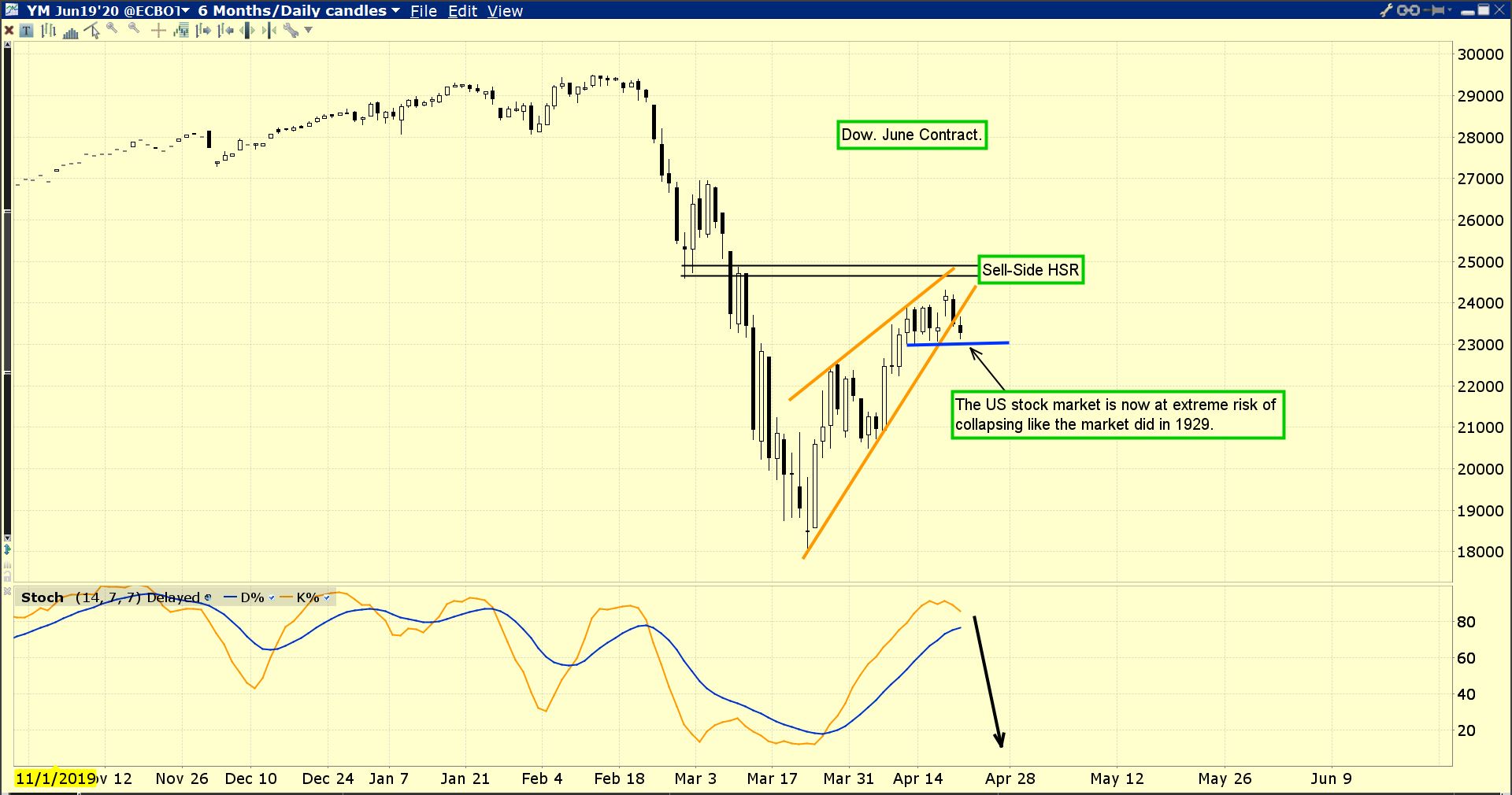 The most socialized sector in America is the stock market. Horrifically, even with relentless government propaganda, endless central bank money printing, and rate cut welfare, the stock market can’t do anything except gasp higher in a failed bear wedge pattern.

America would not have an economic crisis today if the government had a savings mentality instead of a debt mentality. The government never saved for a rainy day, let alone for a crisis, and it never encouraged citizens to save. Given that America has been the world’s lead empire for about a hundred years, that’s totally outrageous.

Incredibly, the government has yet to take any responsibility for the horrifying failure to save. It seems more interested in sending “bully boats” to Iran with even more borrowed money than it does in preparing itself and US citizens to handle a real crisis. 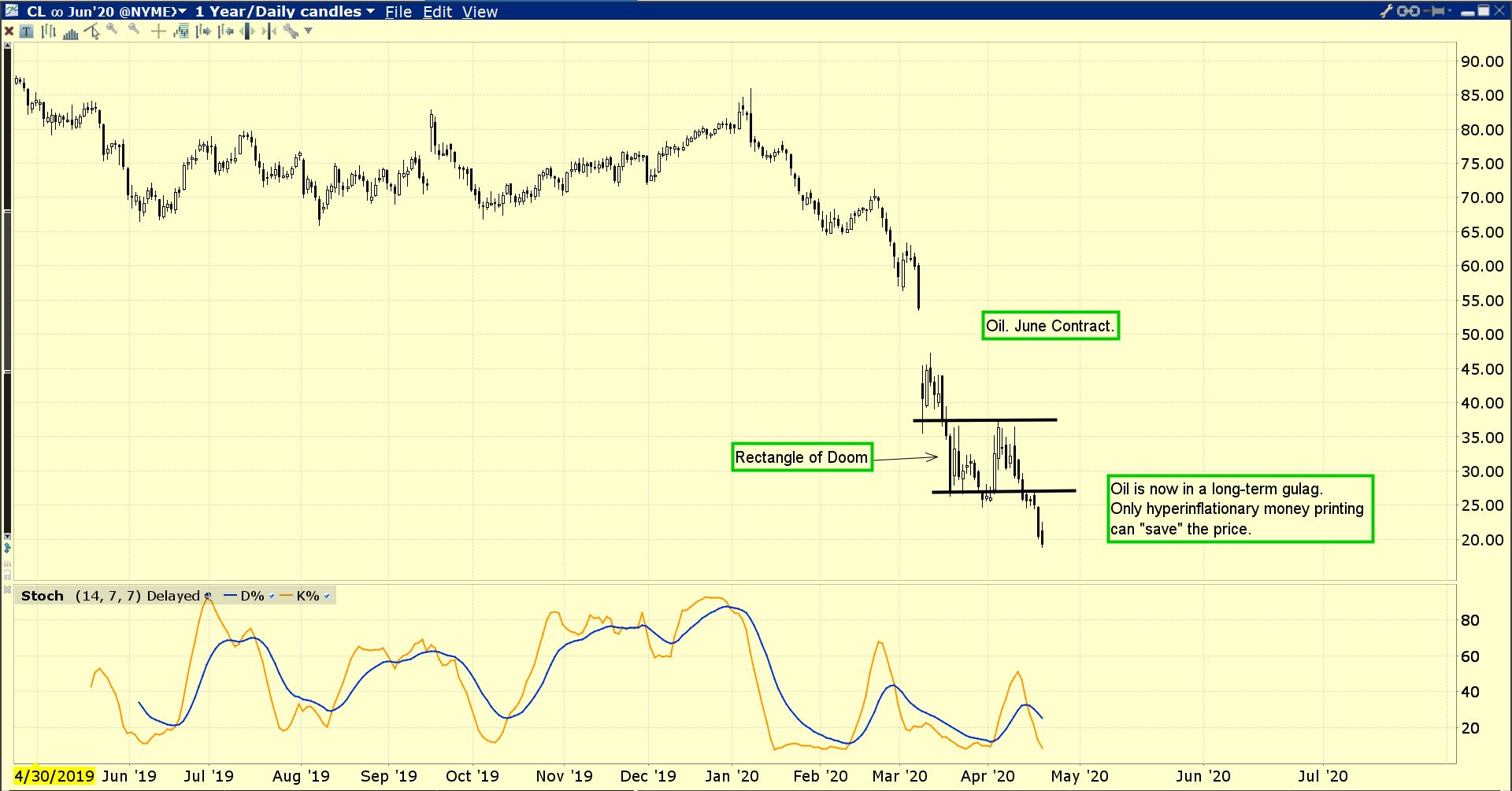 The oil market is the most recent recipient of “corporate socialism” support from the government. I predicted that support would fail miserably, and it did.

While most amateur investors have been envisioning a “V bottom” for oil, I’ve predicted a horrifying gulag… a gulag that could end with hyperinflation rather than economic growth.

The US “petrodollar” is the pillar of America’s debt-based society. It makes sense that Saudi Arabia’s dictators are revered by the US government, because they are the lynchpin for the petrodollar.

The collapse in the oil price puts the Saudi dictatorship at risk, and if it collapses, so could the petrodollar.

Gamblers can buy a bit of oil for a “price pop”, but serious long-term investors need to focus on the gold market.

That’s because as any empire collapses, gold becomes the asset class that comforts investors and provides financial safety for their families. 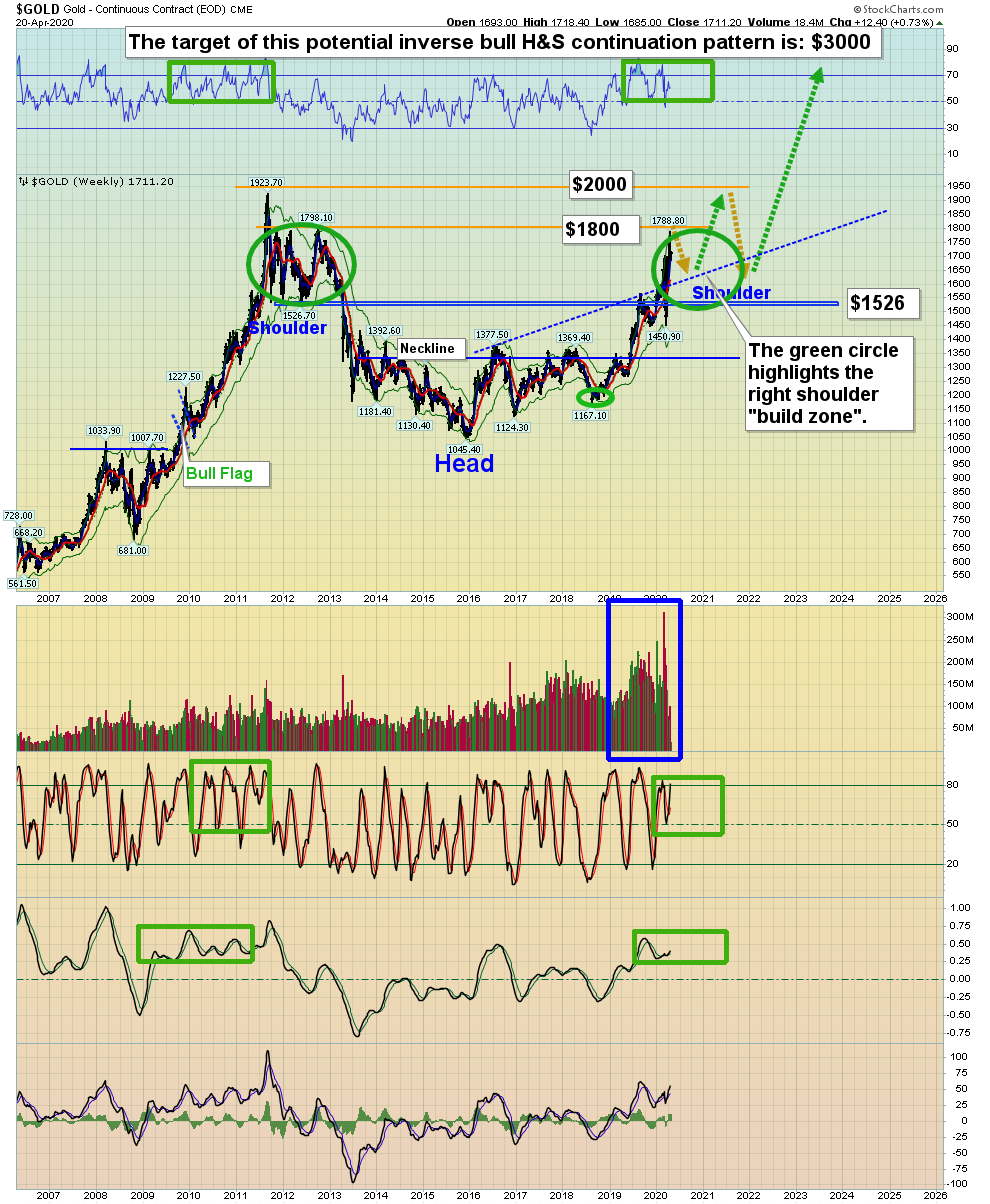 In a nutshell, the long-term technical charts look fabulous, but in the short-term, investors should expect substantial volatility as the build-out of the right shoulder on that chart gets underway. 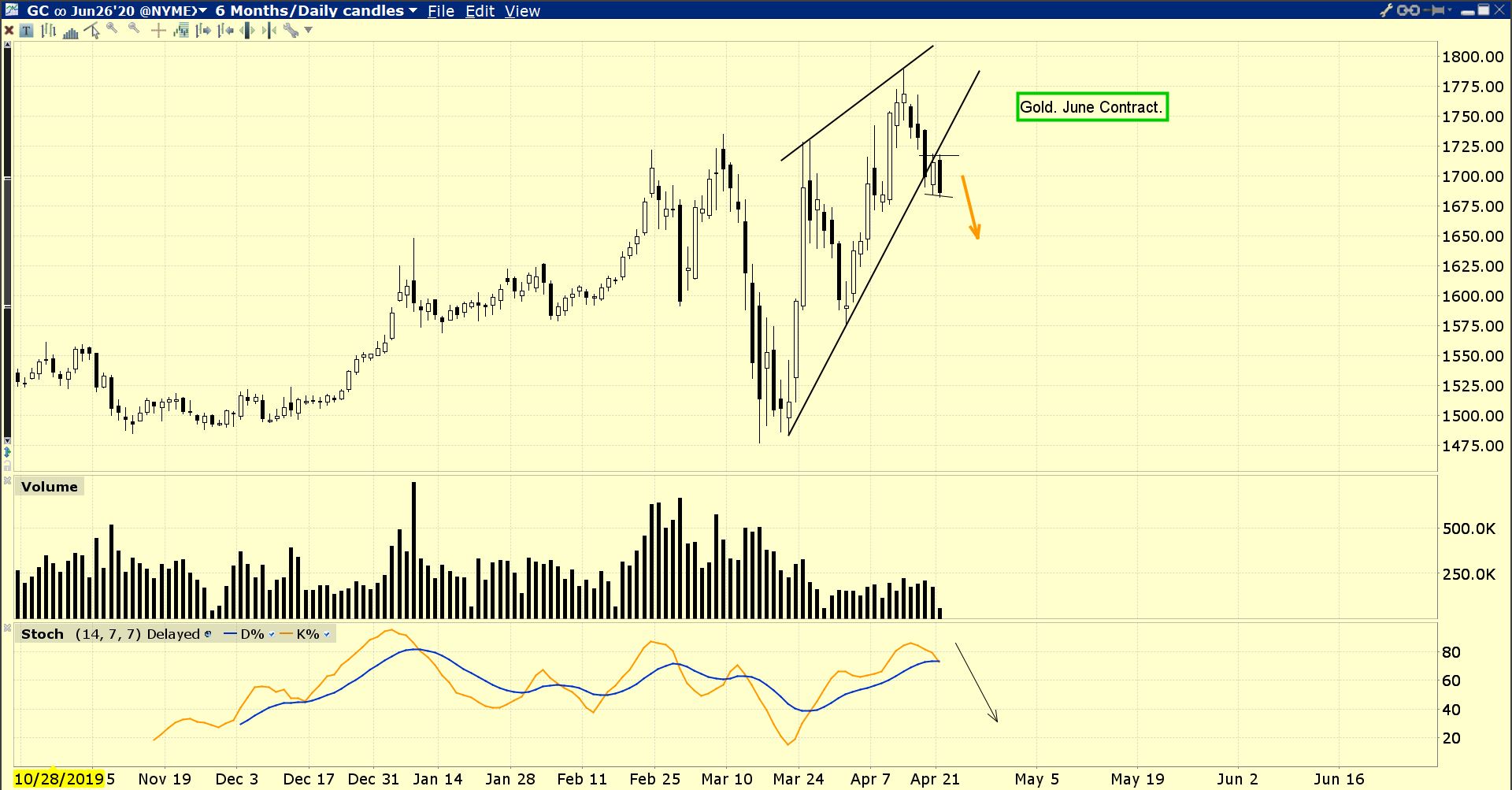 In the short-term, gold has broken down from a bear wedge pattern, and that fits with the start of right shoulder “assembly” on the weekly chart. 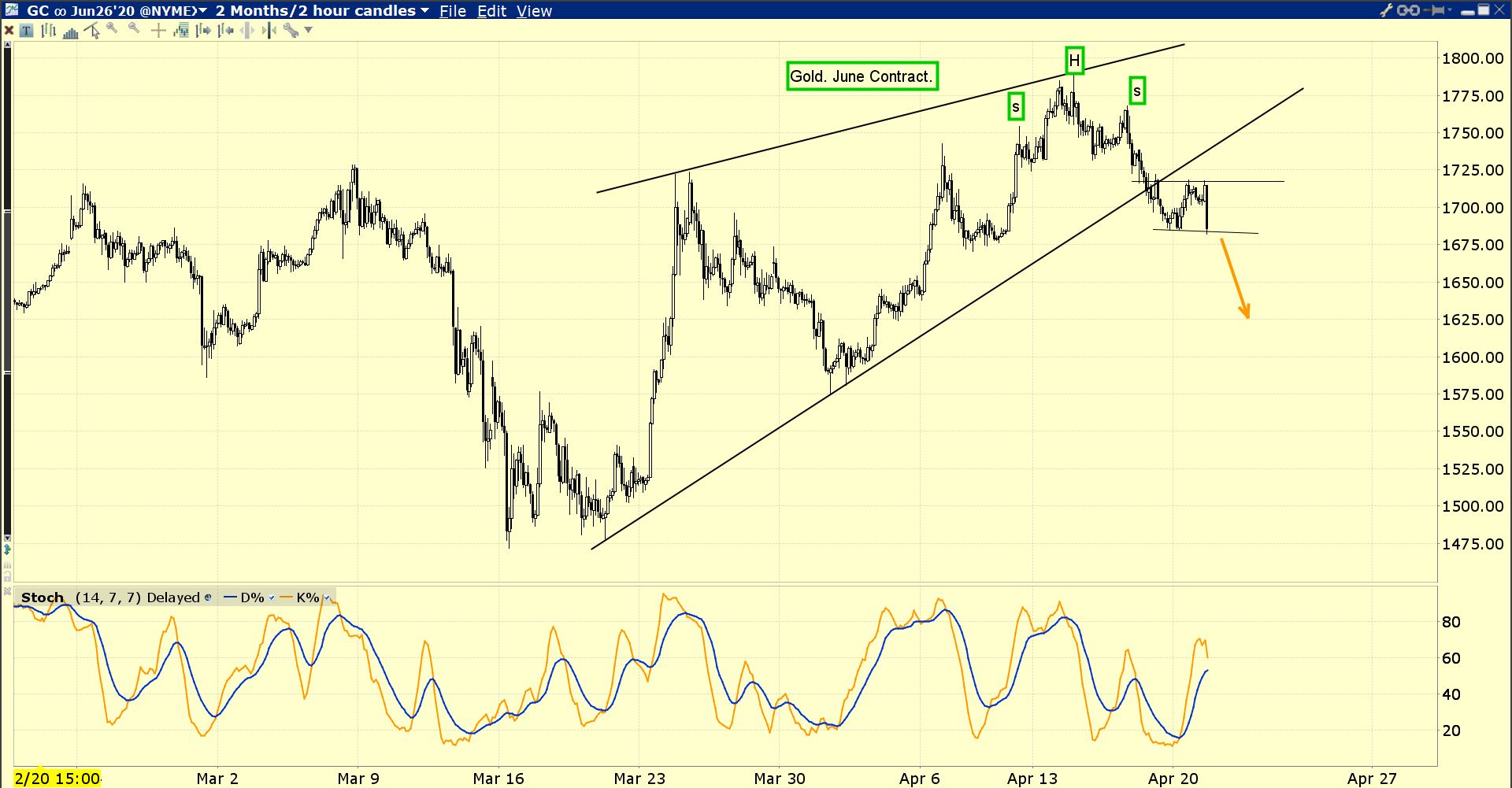 The technical action is clearly negative, but a decline to about $1600 would offer investors close to a $200/ounce price sale. The Corona crisis (perhaps better termed a “failure to save” crisis) has increased gold market volatility.

In the past, I suggested passive gold investors buy gold and related items on $100/ounce price sales. Now the number that fits with current volatility is probably closer to $200/ounce. 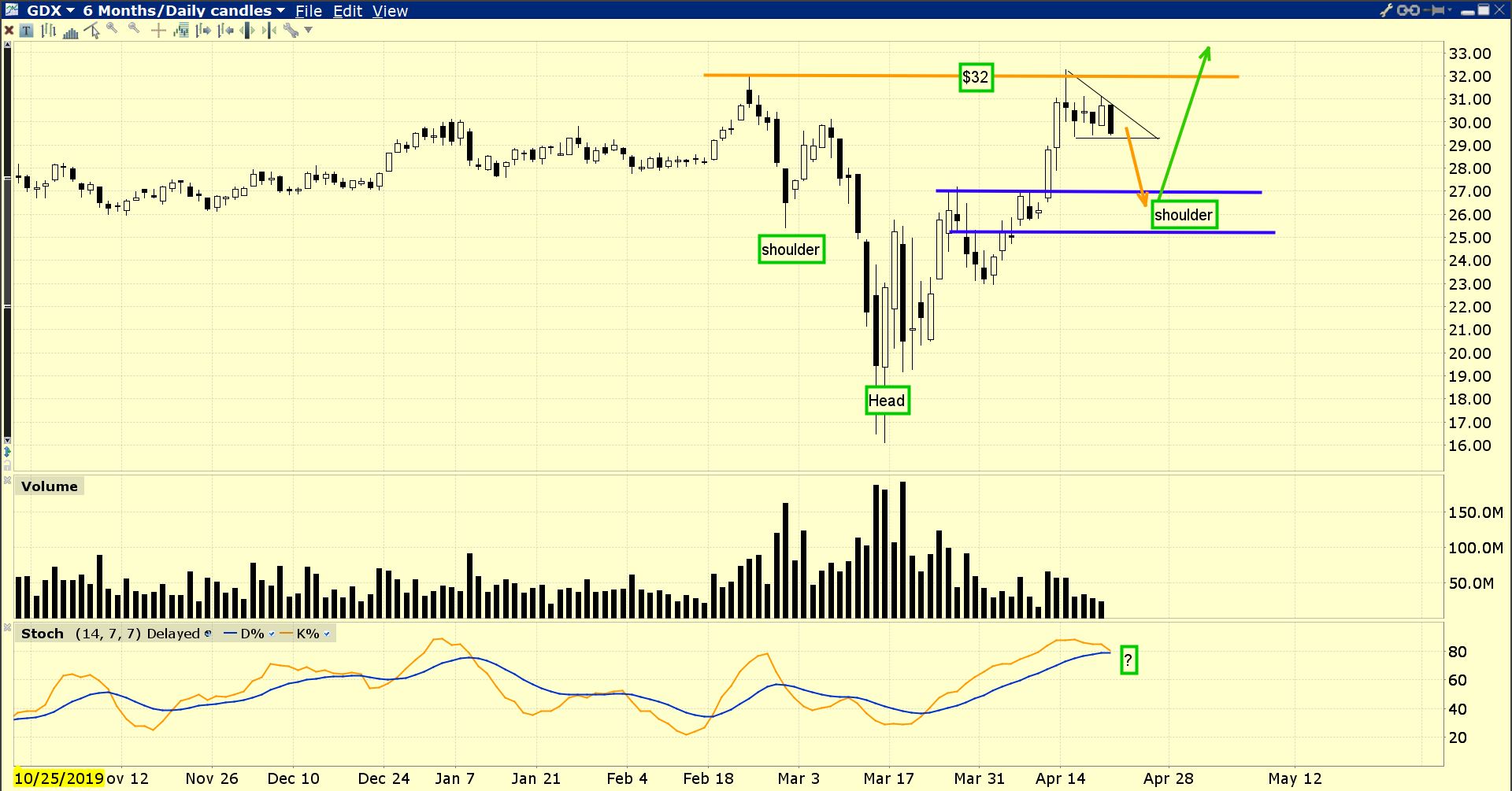 Until the US government begins promoting gold rather than itself as the main key to managing a crisis, gold stocks will continue to suffer during major stock market meltdowns.

The good news is that a pullback would make the charts of GDX and many individual miners look even more bullish than they already look right now.

One thought on “Gold Shoulder Build And Stock Market Collapse”