The massive set of stimulus measures rolled out last month by the Treasury Department and Federal Reserve has left many Americans wanting more… and politicians scheming for new ways to dole out additional trillions in cash.

Most taxpayers have already received their $1,200 “stimulus” payments. However, that one-time payment will do little to repair the long-term financial health of the 26 million (and rising) who are newly unemployed.

And it surely won’t bail out all the small business owners who were callously deemed “non-essential” and forced to shut down during this pandemic.

A national WalletHub survey found that 84% of Americans want another stimulus check.

The idea of getting free money is understandably appealing, especially during times of extreme economic anxiety.

But ultimately, there ain’t no such thing as a free lunch. All government handouts come at a cost that will be paid one way or another.

A group of young radical leftist Congresswomen – the “Squad,” as President Donald Trump calls them – want to use the current crisis to install a universal basic income scheme.

The Squad’s proposal would “immediately provide a $2,000 payment using BOOST debit cards to every person in America as critical relief during the COVID-19 crisis, followed by $1,000 recurring monthly payments for one year after the end of the crisis,” according to the press release. 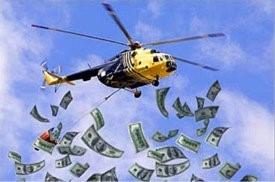 With the federal government already on track to run a record budget deficit well over $3 trillion this year, where will the additional trillions needed to fund BOOST payments come from? Tlaib and Jayapal think they have the answer: order the Treasury Department to mint trillion-dollar coins.

That is not a hyperbolic characterization of what they propose. They literally propose that monthly BOOST payments be “funded directly from the Treasury with no additional debt issued by minting two $1 trillion coins, and additional coins as necessary.”

It may be absurd from a sound money point of view, but that’s not to say it isn’t clever political marketing. The Squad can sell a multi-trillion-dollar spending program as being deficit neutral.

Plus, nobody’s taxes would immediately have to be raised in order to pay for it. The Federal Reserve would bear the cost by “buying” the Squad’s $1 trillion coins minted of platinum and crediting the U.S. Treasury’s account with the funds.

Ultimately, of course, all holders of U.S. Federal Reserve notes would bear the costs of the scheme. And to the extent that automatic guaranteed monthly payments disincentivize job seeking and job creation, they would diminish economic productivity and thus add pressure for further devaluations of the currency.

Instead of increasing the country’s wealth, Zimbabwe’s hyperinflationary monetary system, under the latter years of Marxist strongman Robert Mugabe’s rule, led to severe impoverishment – even though on paper the typical Zimbabwean had become a trillionaire.

The U.S. may be a long way from experiencing Zimbabwe-style hyperinflation in practice. But in principle, our fiscal and monetary policies are becoming increasingly Zimbabwean.

The Fed now openly acknowledges that our monetary system is predicated on an unlimited printing press.

It touts its willingness to run the printing press with reckless abandon to prop up everything from to bank accounts to junk bonds.

Pelley: Can you characterize everything that the Fed has done this past week, as essentially flooding the system with money?

Pelley: And there’s no end to your ability to do that?

Kashkari: There is no end to our ability to do that.

Pelley: Is the Fed just going to print money?

Kashkari: That’s literally what Congress has told us to do. That’s the authority that they’ve given us.

Fed officials no longer even pay lip service to the idea that the Fed operates within a limited dual mandate “independent” of politics. If Congress tells the Federal Reserve to buy bonds, stocks, mortgages, or trillion-dollar coins, it will do so.

The less sound U.S. monetary policy becomes, the important it is for investors to seek out the protection of sound money in the form of gold and silver. The money metals cannot be debased by an unlimited printing press.

And for that matter, neither can platinum. A typical one-ounce platinum coin won’t suddenly become worth $1 trillion in the next stimulus package (the Platinum Eagles made available to the public carry an arbitrary face value of just $100).

2 thoughts on “What’s Next, Trillion-Dollar Coins?”