Things appeared normal, and then everything changed…

U.S. COVID-19 official cases on April 28: over 1,000,000, if you believe the Johns Hopkins numbers. Exponential growth in sickness, debt, and expenditures are “killers.”

The economic, emotional, and physical scars from the virus will torture us for a long time. Disneyland and Disneyworld are closed indefinitely.

Meanwhile, back at the Eccles Building in D.C., politicians at the FED accelerated digital “printing” of dollars to WARP (Wacky, Arrogant, Ridiculous and Preposterous) speed. QE4ever pushed The Fed balance sheet beyond $6 trillion, up $2 trillion in a few months.

The Newer Normal in our post virus experience includes isolation, recession, depression, unemployment, business failures, personal bankruptcies, and never-ending Fed and government bailouts. The world changed in early 2020, as it did after 1941, 1964, 1971, and 2001.

When your only tool is a hammer, everything looks like a nail.

The Fed’s tools are interest rate policy and monetization of bonds—QE4ever. The economy will be hammered with low rates (already happened) and Fed purchases of Treasury debt, mortgage-backed securities and other debt.

THE NEWER NORMAL AND VACCINES:

A Fed balance sheet of $10 trillion. Central bankers might claim the first $5 trillion is the hardest. The next $5 trillion will soon be “printed.” Government will spend, and the Fed will monetize.

Growing realization: Creating $5 trillion was easy. One should ask, what will the next $5 trillion be worth? A virus can destroy people’s confidence, and printing can weaken confidence in the purchasing power of dollars.

Rescue: The Fed will “print” to rescue stocks and bonds. They will sacrifice the dollar’s purchasing power.

Shortages: Gold and silver dealers are mostly sold out, and the economic crisis is only beginning. Mines will close, people will panic to escape increasingly worthless dollars and want real assets. Supply will fall, demand will rise. Premiums over spot prices (COMEX paper prices) are at or near the highest in history. Higher spot prices and much larger prices for real coins and bars are inevitable.

Vaccines: A vaccine for COVID-19 will be immensely profitable for “Big Pharma” so it will become available. But a vaccine to counter the disease of central banking is available now! We call it GOLD!

“It’s all Trump’s fault because she thought it was ‘safe’ to go ahead with Mardi Gras which likely infected hundreds…” From the Mayor of New Orleans.

“There’s no natural calamity that the feds can’t make worse.”

Schectman: “You Will Not Understand the Future.”

Christenson: “The Four Horsemen of the Apocalypse.”

We have transitioned into a Newer Normal, as happened after Pearl Harbor, Nixon’s decree in 1971, and 2001.

Governments will bail out individuals and businesses. More debt will be heaped onto an existing mound of toxic, never-to-be-repaid, debt.

Stocks often blast higher during bear markets. Bonds rise when central banks promise to buy bonds. But such rallies are not sustainable. Economic and political responses to the virus damaged a weak economy.

Bonds and stocks carry counter-party risk. If Company A can’t pay Company B, then your trust in Company B might be rewarded with default and bankruptcy.

If an employee is laid off, he may not pay his bills. The second and third-order consequences are huge and long-lasting. Think bankruptcies, foreclosures, lost homes, closed businesses, massive unemployment, human misery, social unrest, anger at the elite, and rage against the machines of government and Wall Street.

Gold and silver coins and bars have no counter-party risk. They are universally valued and hold their purchasing power. The same is not true for dollars, stocks, sovereign bonds, commercial paper, mortgage paper, real estate investment trusts, student loans, and so many more.

Gold and silver coins and bars have been difficult to source in the past month. There is no fever like gold fever. Fear and panic are huge motivators.

Many stocks will rise a little and fall a lot. Gold and silver will fall a little and rise huge. Take your choice.

In times of fear and panic, over three thousand years, people have found security in gold and silver bullion. This time is NOT different. Read: “There’s No Gold!” 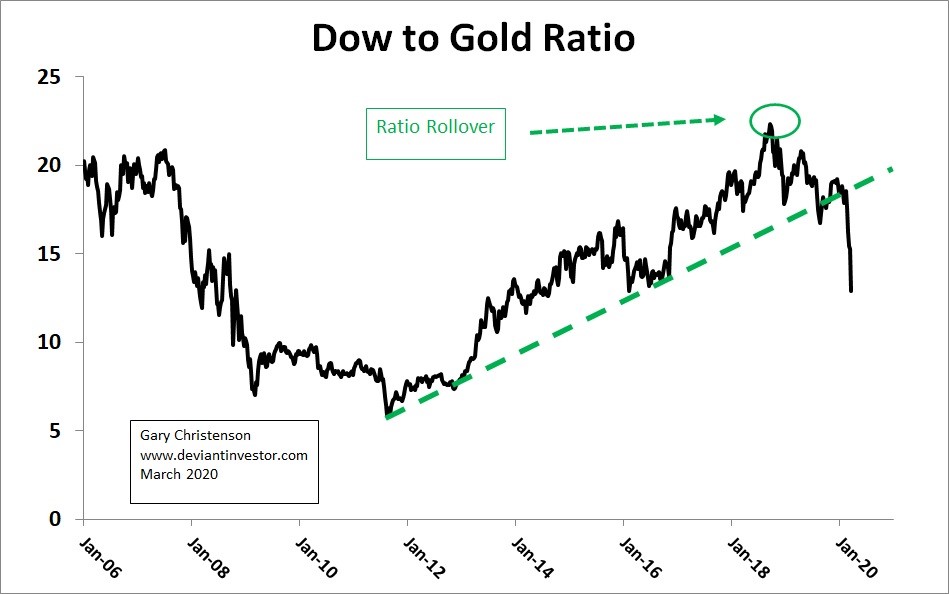 Miles Franklin can’t lower interest rates, supply toilet paper, manufacture vaccines, change Fed policies, send bailout checks to individuals or devalue the dollar. Other businesses, agencies, and central banks perform those functions. Government and The Fed will do their things, even if they kill the economy and the dollar’s purchasing power.

Miles Franklin sells gold and silver—the real stuff. You may experience delays receiving your product, but prices are confirmed. Call 1-800-822-8080.

One thought on “Golden Vaccines And Dow To Gold Ratio”