It was the best of times, it was the worst of times. April closed as the best month for the US stock market since the V-shaped recovery that followed the Black Monday stock market crash of 1987. April also delivered the deepest, broadest economic collapse of any month in history.

The economic collapse was simultaneously global. What is written here about the US can pretty well be said for all nations in the world. The collapse crushed jobs, personal income, consumer spending, consumer sentiment, car sales, and general economic activity more than any month in the history of the nation. Some of those sharpest declines happened in March, but April relentlessly drove to to greater depths. But stocks rose. 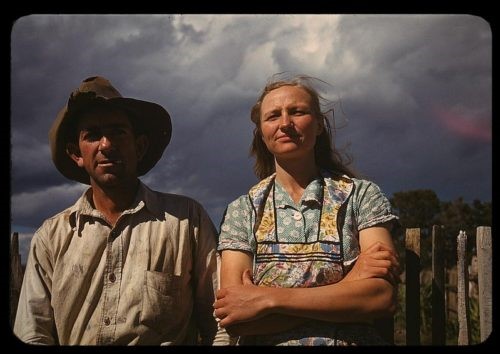 It stomped the housing market into the dust and pushed oil prices deeper down the wells of Texas than anyone ever imagined was possible. It also set up the world for potentially serious food shortages in the summer, as farming, processing and delivery all collapsed due to lack of labor under the intense social restrictions of the coronacrisis — the first global quarantine in the history of the world. And stocks still rose.

Perhaps this should call it Black April, though March was worse in many ways. It’s just that the economic collapse kept on getting deeper in April. Yet, stocks had their best month in more than thirty years. That’s incongruity on a massive scale — the greatest economic denial in history.

The first-quarter decline in GDP came in at 5%, but the monthly decline in April was far worse. Though we don’t have the specifics, we know that half of the first quarter was, to the best everyone knew, virus-free in the United States. Viral lockdown was not even a thought. April alone, probably brought GDP down more than another 5%. Still, stocks rose.

Many are calling the present economic collapse the Second Great Depression.

We’re facing the worst economic recession of our lifetimes…. If your saying the markets actually think its only going to be three months, I hope they don’t think that! It’s a very long time before we get back to normal…. Social distancing is clearly going on for months and months…. You’re going to see a lot more inequality … more political polarization and anti-establishment sentiment…. That’s going to disenfranchise a lot more people. It’ll lead to more political polarization…. The potential for an outright cold war between the United States and China is getting a lot larger…. The worst economic cataclysm of our lifetimes…. Coronavirus … speeds up a lot of things that were already happening. It takes ten years and compresses them into one and half…. The Greek crisis … is going to be driven forward much more quickly now…. I worry about … the global middle class … now going back into poverty…. Humanity is not going to do better coming out of this crisis…. There is no country in the world that you’re going to be able to go back in three to five years time and say, “We came out better because of that coronavirus crisis.”

And yet stocks continued to rise.

Best case scenario … If we can figure out how to do K-12 in the fall, that would be good. I even even think that, if we’re creative about it and things have gone well, we’ll be able to [open] college [in the fall]…. How many schools are opening up? We won’t really know enough until pretty close to the start…. The economy is not going to be anything like it was…. You do have an economy that is going to be operating at a lower level…. There’s no doubt that’ll be the case for years to come…. That should affect overall [corporate] valuation. You know, there aren’t that many great investments…. I find it a little surprising where the market is.

Yet, the stock market continued too rise. It rose against the following onslaught of the worst crash-dives into economic collapse in nearly a century. Some of these deformations in the economy are the deepest rifts in US history:

That’s over 12 times the prior worst five-week period in the last 50-plus years … and … the highest level of continuing claims ever.

According to the BEA, disposable income and personal spending fell off a cliff: 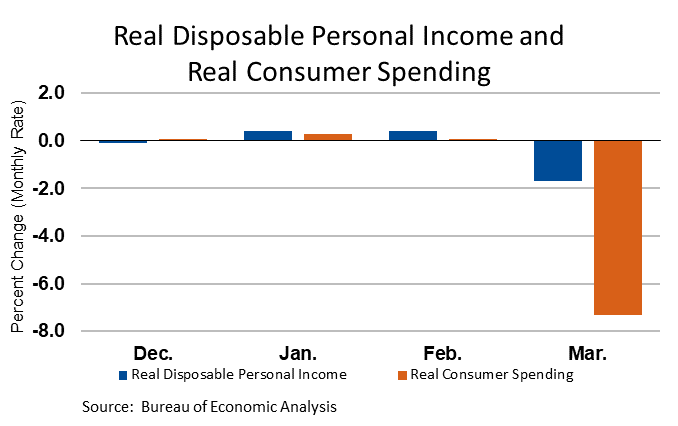 Corresponding with that, gross domestic product, the common official gauge of the entire economy (whether it should be or not), plummeted:

Since GDP is how we measure the economy, a massive collapse in GDP IS an economic collapse.

Similarly, the Chicago Fed’s economic index took a trip into the abyss: 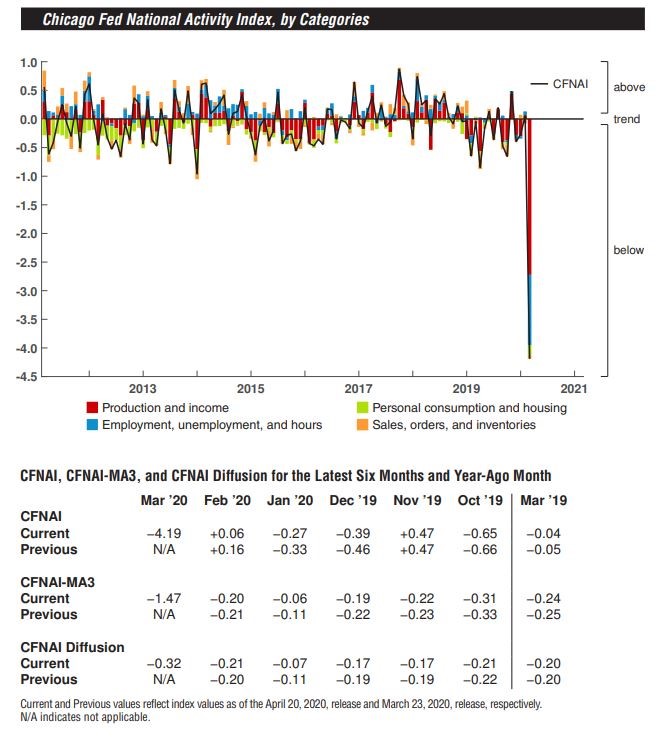 In light of all of that, it’s not surprising that consumer sentiment, the only thing carrying the economy along during the last year, also collapsed: 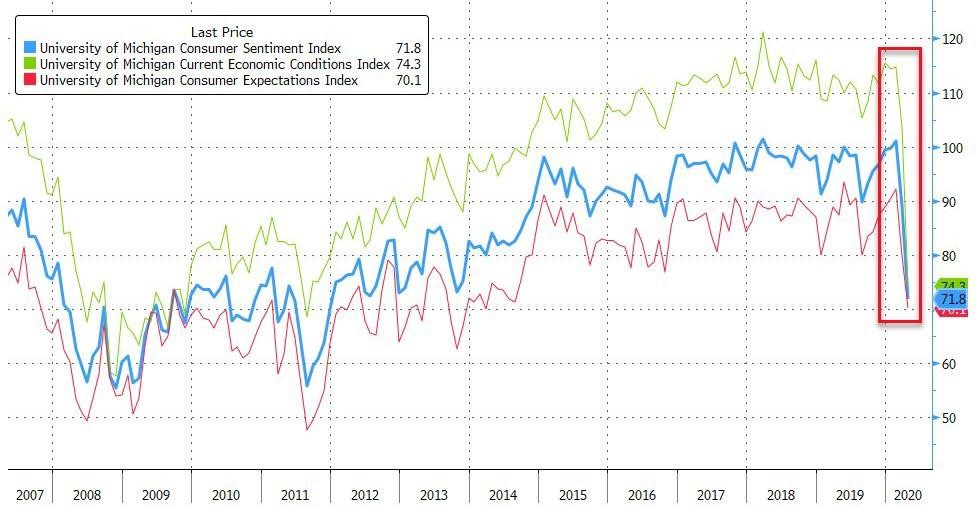 All gauges of the economy are showing collapse.

Anything below 100 indicates sentiment is leaning negative.

Consumers won’t have anything to spend their falling money on anyway due to shortages. Of course, shortages typically mean price inflation, so they will be spending as much money for less of what they want. Drudge ran the following headline:

While the National Review titled their story more sedately, the fact remains that a collapse in food supplies is becoming a concern under the coronavirus lockdown.

Carmageddon or the Carpocalypse continues:

That paired up nicely with this:

As unemployment soars, borrowers are putting off payments…. Ally Financial Inc. said on Monday that about 25% of its auto-loan customers have taken advantage of its payment-deferral program….

“The ‘Great Repression’ is here and it will make past downturns look tame, economist says“

[Base case:] 30% contraction in real gross domestic product in the second quarter, negative year-over-year consumer price growth for 5 quarters, and an unemployment rate of 14.2% by the end of 2020, averaging 13% throughout 2021.

Stocks shrugged that one off because we all know Eurpean banks are worse off than the US. “It won’t affect us. It’ll never happen here.”

Yet, another banking collapse may not be that far off either. Remember the last time we heard headlines like:

“Housing To Take A Hit“

Home purchases in March had their biggest decline since November 2015. Some say a crash is inevitable at this point.

After a nice rise finally at the start of the year, the housing collapse looked like this: 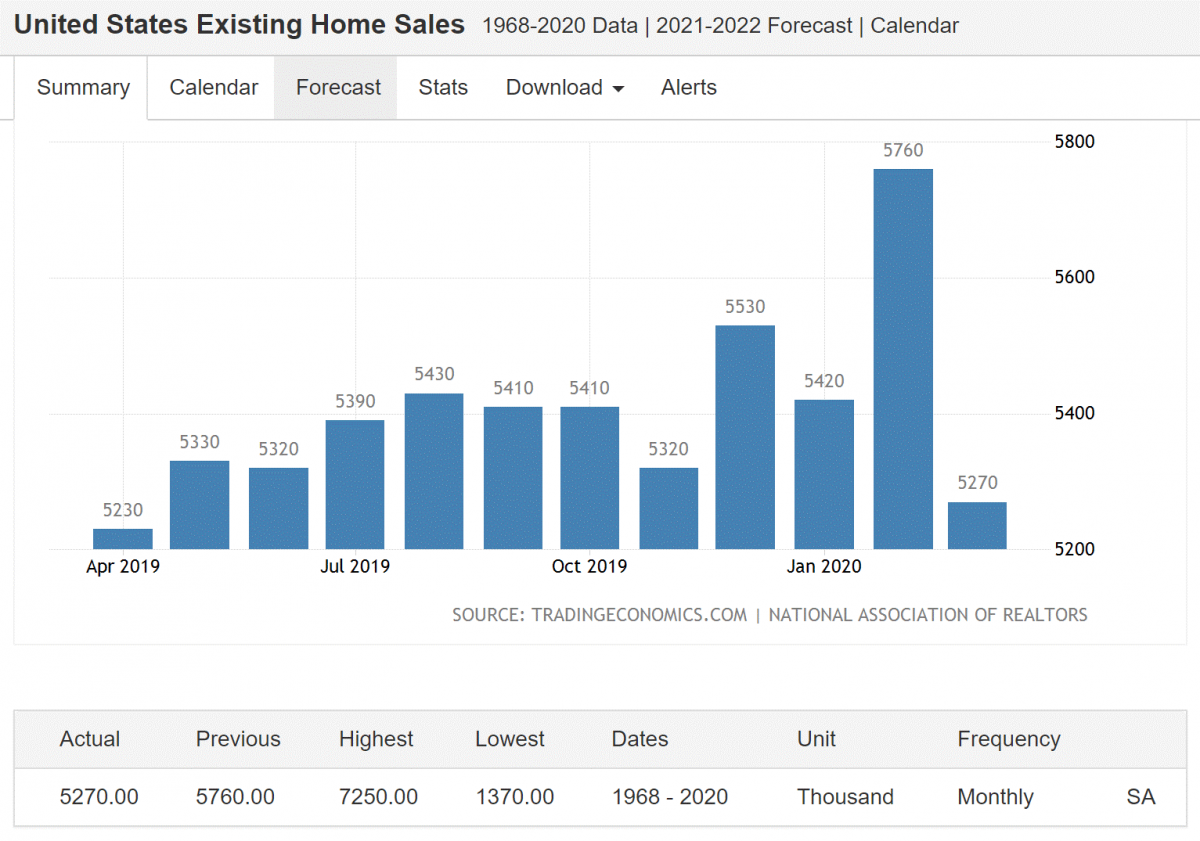 That pretty well crashed into the ground. 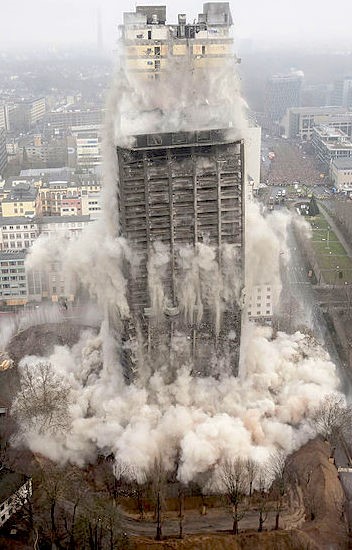 Planned demolition of the global economy causes greater economic collapse in our lifetimes.

We’re falling into our basement in our own self-designed demolition. Even some major central banks and mainstream media are joining in the Depression chorus to sing of how deep this going: The following quotes are collected from an article titled “Reopen the Economy While Protecting Those Truly at Risk or Face Another Great Depression.”

“We are experiencing an economic contraction that is faster and deeper than anything we have seen in the past century, or possibly several centuries,” Bank of England interest-rate setter Jan Vlieghe said.

The coronavirus collapse has the ingredients to surpass the disaster of the 1930s…. Let’s hope this depression won’t last a decade, but an unprecedented slump followed by years of pain seems inevitable, said a Bloomberg commentary.

From economist Nouriel Roubini: “The best economic outcome that anyone can hope for is a recession deeper than that following the 2008 financial crisis. But given the flailing policy response so far, the chances of a far worse outcome are increasing by the day.”

“Forget recession, this is a depression,” says the left wing Guardian.

The coronavirus pandemic will push the global economy into the deepest recession since the Great Depression…, the head of the International Monetary Fund said Thursday.

“The expectation of market participants is that we’re in the Great Depression and that in a sense, the news can’t get much worse,” said BNY Mellon chief strategist Alicia Levine.

“At this point it would take a miracle to keep this recession from turning into the Great Depression II,” says Chris Rupkey, of Mitsubishi’s economic unit.

Powerful words from many powerful players, who don’t hesitate to go straight from the R-word to “great depression.”

But the stock market still put in its best performance since the 80’s.

And oil, of course, priced negative for what was surely the first time in world history. No one ever thought empty barrels of crude oil would be worth more than full ones.

Even Jerome Powell, who always tries to talk the market up, said “We’ll see economic data in Q2 that’s ‘worse than any data we’ve seen’.“

But stocks continued to rise anyway.

The market went up, even though Powell warned of economic catastrophe, because he also promised to throw lots of gasoline on it:

We can do what we can do, and we will do it to the absolute limit of those powers. We’ll keep at it … to get through this thing.

Does the stock market keep flying or crash?

I still believe reality always wins in the end, so this is a bear-market rally that will end in great misery. Incredible as the present rally is, it is perfectly in keeping with every major market crash in history. The pattern of great crashes always goes like this: 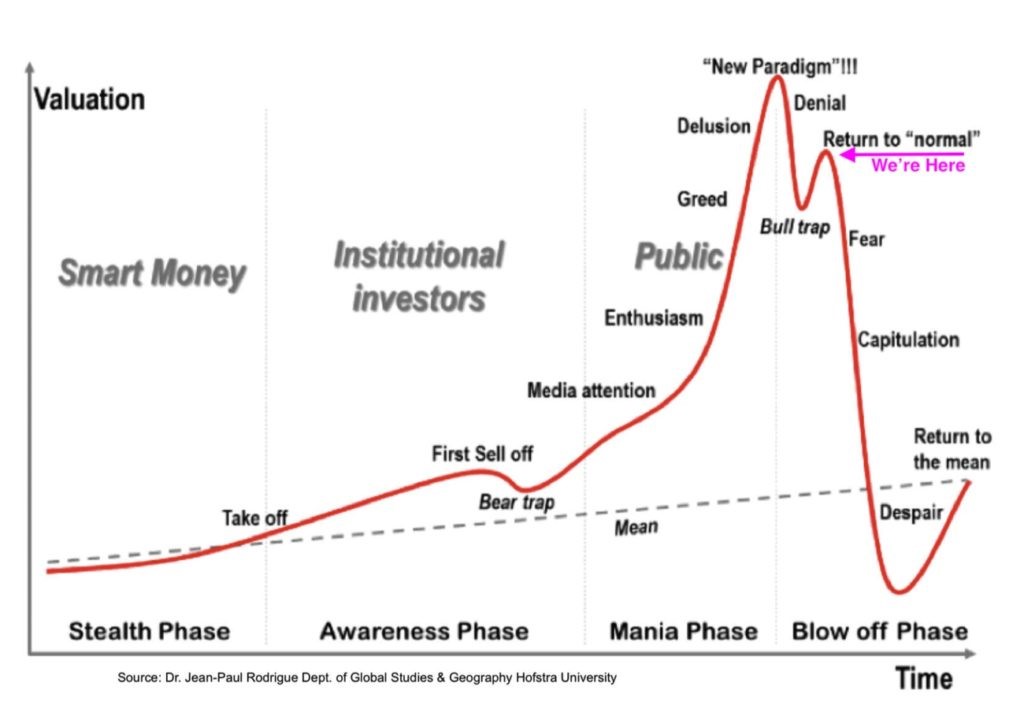 After years of climbing, there’s a sudden crash of 20% or more followed by a rally about halfway back to there last record high, and then reality kicks back in with the worst yet to come.

Here, for example, is the great crash of 1929 and the stock market that followed during the ensuing Great Depression: 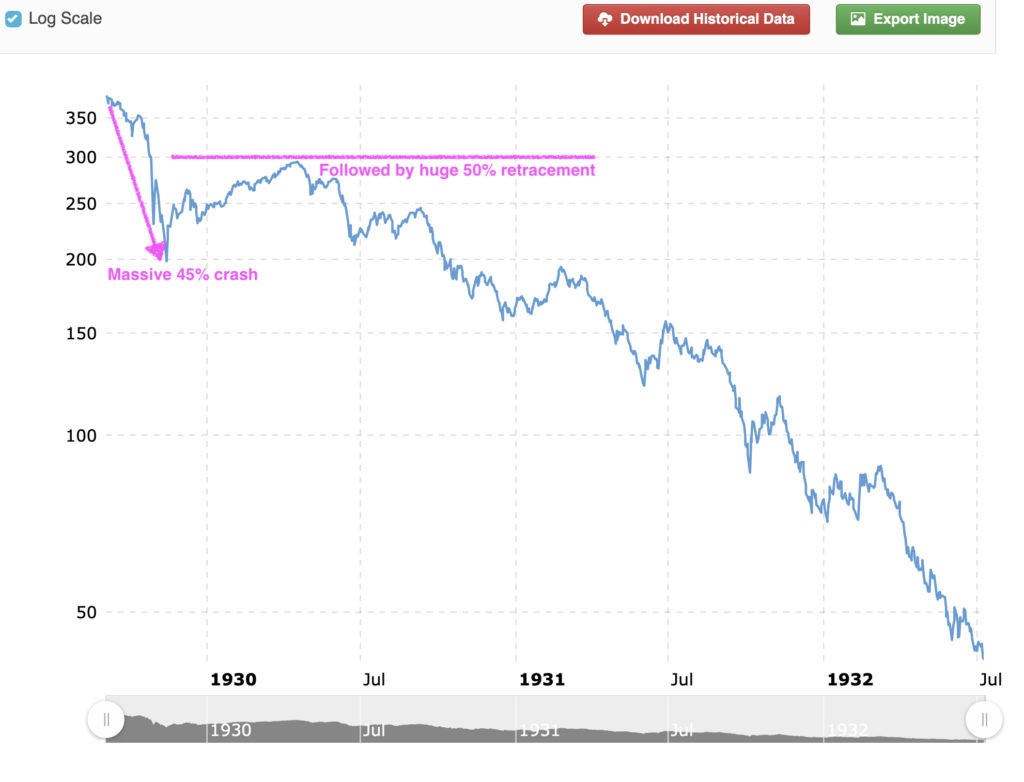 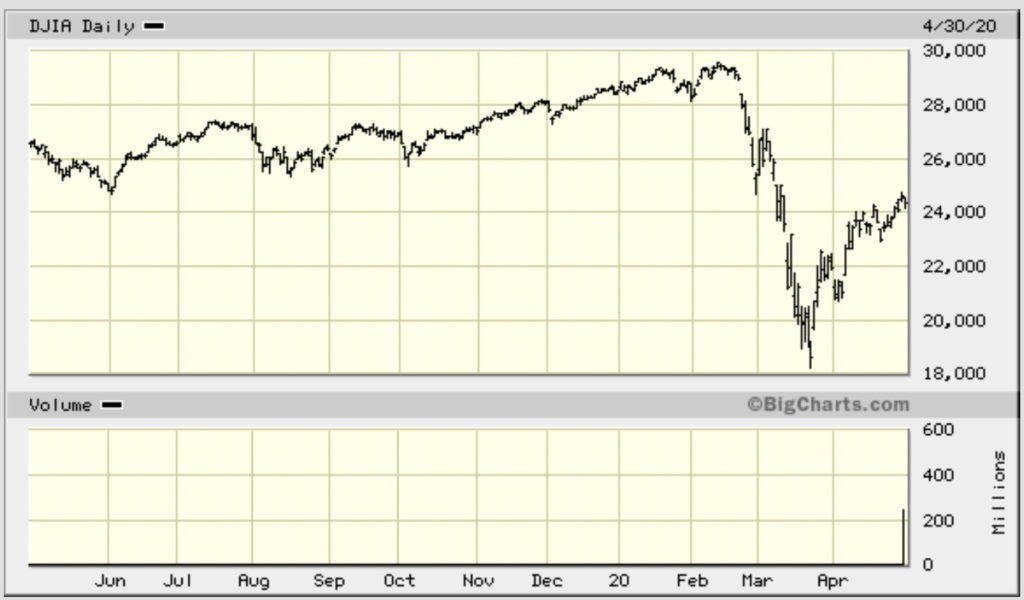 About halfway back. The fact that the pattern matches all previous crashes, doesn’t prove history will repeat itself with an even greater downturn now, as it has done in other major events. However, it does forewarn one not to make too much of an extremely euphoric rally. The market crashed in one month, so now it rallied halfway in a month. It the perfect counterpart if its going to match up to other periods of deep economic collapse..

Although the stock market just experienced its best month in decades, the rally in 1929 was the best in decades, too.

Even the Fed finally admits it may be coming up against the Law of Diminishing returns, which I have said for years will ultimately be the undoing of the Fed’s unsustainable recovery efforts:

“The law of diminishing returns is a very powerful force in economics, and so we have to be concerned that it may also apply to quantitative easing.”

Of course it does.