Skip to content
HomeBill Gates Goes Viral On Digital ID And Digital Currency
By David Haggith – R$e-Blogged From Silver Phoenix
.This may be my most important article to date. Bill Gates went viral in several controversial interviews last month, advocating mandatory digital ID as proof of coronavirus vaccination as soon as a vaccine is available. The proof will be required, if Gates has his way, before anyone is allowed in large public gatherings. 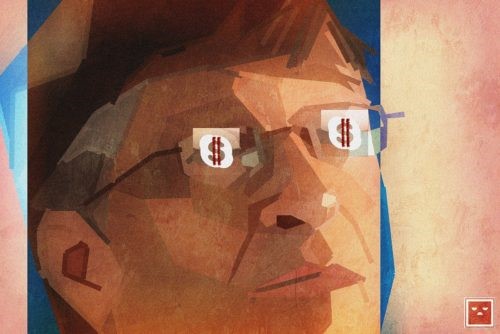 Coronavirus is handing Gates the world he said he wanted 20+ years ago — a world he said he would do everything in his power to bring about. (Not the diseased aspect, but the changes coming with that disease.) How ironic (or is it?) for a man whose charitable work has focused on vaccinating the world against viral diseases.

Bill Gates says proof of COVID-19 vaccination will be mandatory

It sounds like something straight out of the The Apocalypse, but Bill Gates has funded development of a digital tattoo that he now publicly says should be required for people to live in public now that a everyone in the world now lives under the overhang of the COVID-19 coronavirus.

One possible requirement … is the mandatory participation in a global vaccine program, underwritten by the Bill and Melinda Gates Foundation, Big Pharma and an assortment of other people who supposedly have the best interest of the global citizenry in mind.

MIT is working on a “quantum tattoo” that will mark you with an invisible identifier while also delivering a vaccine. Can you guess who is the premiere donor of the project? https://t.co/ZEWqCUVGwI pic.twitter.com/jFVip4DaqZ

If Bill Gates has his way, the government must make sure all people who participate in public events are vaccinated before they are allowed to join in the fun.

In a new interview, Bill Gates authoritatively states that mass public gatherings will not come back “at all” until we have mass vaccination. Who made him king of the world? https://t.co/siW7bZ9yGc … pic.twitter.com/ivaCI8eAEl 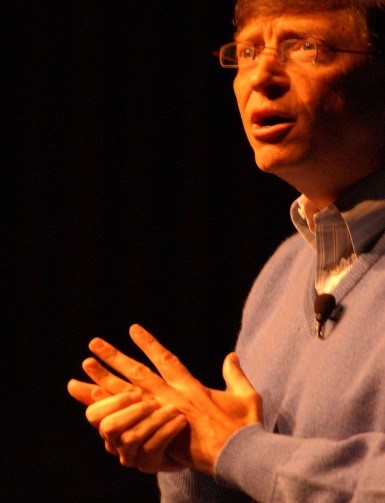 He created so much stir that some of the videos of Gates making that statement, which I saved links to as I composed this article, are “no longer available.” Gates referred in the videos to “immunity passports,” calling them a “digital certificate.” Other aspects of Bill Gates’ work indicate those “immunity passports” will be in the form of digital tattoos on the back of your hand or forearm.

I heard this interview with Bill Gates a little over week ago. When I started writing this article, I searched all over to try to find the interview. Most versions of the interview that had not been pulled had the controversial parts edited out. Finally I found this one that had not been edited. All of which is to say, don’t be surprised if it mysteriously disappears from YouTube before you even read this article or also gets edited.

Here is my own transcript in case the video gets scrubbed:

Eventually what we will have to have is certificates of who’s a recovered person and who’s a vaccinated person because you don’t want people moving around the world where you’ll have some countries that won’t have it under control — sadly. You don’t want to completely block off the ability for those people to go there and come back and move around, so eventually there will be sort of this digital immunity proof that will help facilitate the global re-opening up.

The implication is clearly that you will not be allowed to move around the world freely and publicly without that “digital immunity certificate.”

In case this unedited video I was able to find gets pulled or edited, I also found this one, describing a “different world” that includes the digital proof near the end:

Corroboration of statements by Bill Gates about digital indentification

For further corroboration, you can see an interview on Fox with Attorney General William Barr responding to questions about Gates’ digital vaccine tracking, showing Gates clearly said such things, though not specifically the digital tattoo concept.

As you can see, the idea went mainstream and is being talked about everywhere. The authority of big global government sweeping in to force you to vaccinate and to prove with digital ID that you have vaccinated is just about established reality.

The closest verification I can find for the idea that Bill Gates’ digital identification would come in the form of a digital tattoo or a chip implant is not specifically related to coronavirus, but it is solidly connected to proof of viral immunity. First, I found it encoded within this quote from Politifact:

“The researchers are exploring storing data in a pattern of dye, invisible to the naked eye, that is delivered under the skin at the same time as the vaccine. The technology is currently in the proof-of-concept phase,” the [Gates} foundation told PolitiFact in an email. “If successful, governments could elect to incorporate this kind of tool in their immunization programs in place of, or in addition to, their current methods of tracking vaccinations.”

While the tattoo places subcutaneous digital markets, it doesn’t have to be visible. I just has to provide your ID and proof of vaccination when scanned.

I also found this information from Rice University about vaccine tattoo research that the Bill and Melinda Gates Foundation is funding. Apparently the vaccine will be part of the digital ID tattoo. The vaccine is injected in the pattern of something like an invisible bar code that carries markers that will show up electronically when scanned. 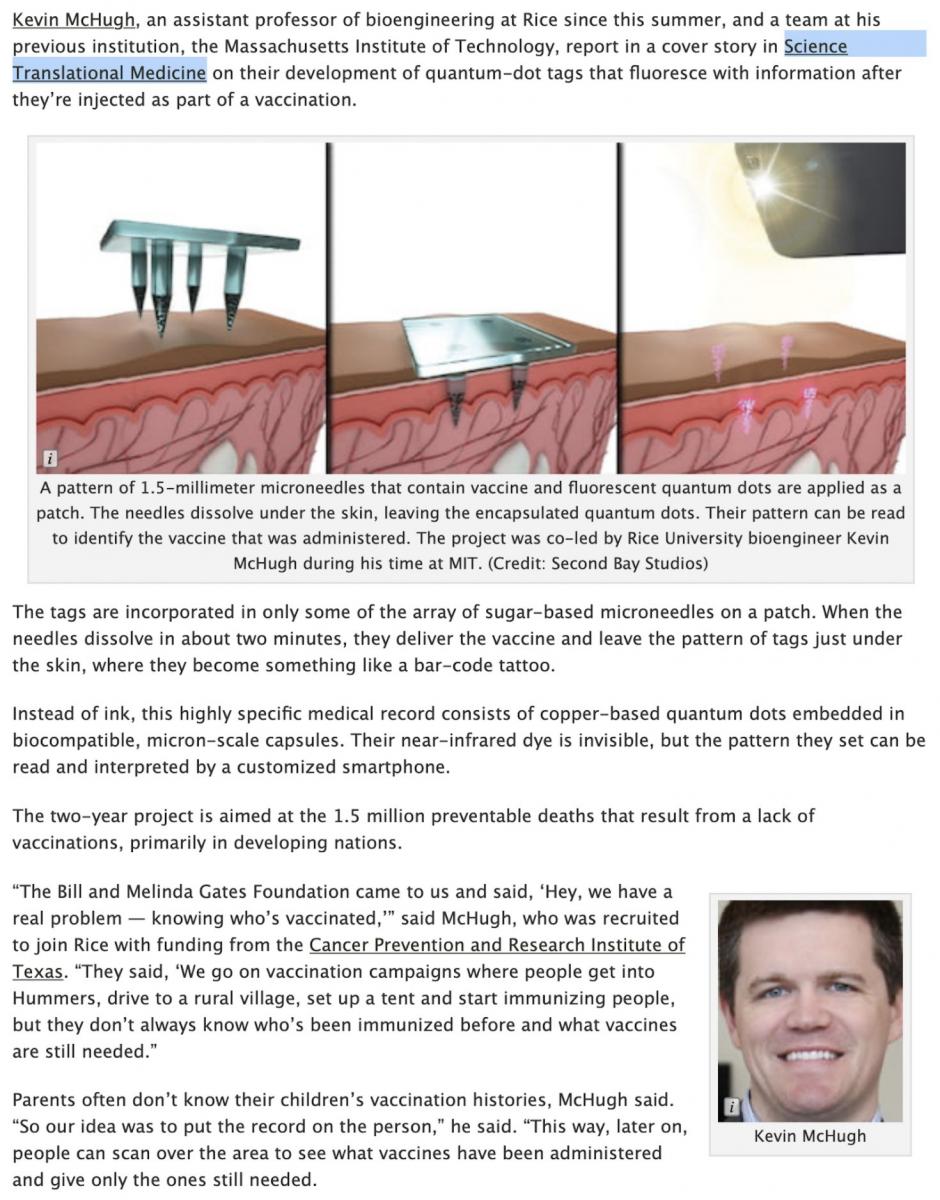 (More detail can be read about this research funded by Bill Gates at Scientific American.)

So, you want the vaccine, along with it comes the Digital ID, like it or not. You’ll just be told that’s the only the vaccine comes. Don’t want the vaccine but want to go to public events, you’ll be told sorry, “You have to have proof of vaccination to enter the stadium.”

That’s how that works.

Note that, in the videos above, Bill Gates is not just proposing digital ID for the US. He wants to see a global form of digital ID for a global problem. I’ve long said our next solution to a global economic crash will be a global cashless system, and this vaccination identification program uses fear of the coronavirus to get us there.

The “digital immunity certificates” are giant leap that may go immediately to simply digital identification, making them useful for financial transactions, computer password logins, security passes, and all electronic transactions as well. Why limit their identification functions to just proof of vaccination. A number is a number. The information it shares with other can be stored on the cloud and changed as needed.

A digital nano-signature in the tattoo would make it harder for people to counterfeit a strictly visual tattoo or an ID card for the purposes of being allowed into community events without having to get a vaccine. The same machine that scans your hand could simultaneously scan your fingerprints to make sure they match the record brought up by the tattoo ID number for nearly foolproof electronic security.

Many people don’t want the new vaccines Gates and others are developing because they involve genetic RNA technology never used in human beings, but many other people want to insist that anyone in public is vaccinated like they are. Viral fear gives the upper hand to the vaccination crowd, and if the tattoo is the only form of vaccination available … you do the the math.