Powell gave a much-awaited speech yesterday, in which he sent one bearish and two bullish messages for gold. What exactly did he say and what does it mean for the yellow metal?

Powell Sends One Bearish and Two Bullish Messages for Gold

Jerome Powell gave a speech yesterday at the Peterson Institute for International Economics. The Fed Chair acknowledged the unprecedented depth of the coronavirus crisis, and its disastrous impact for the US labor market, something we also noted many times:

The scope and speed of this downturn are without modern precedent, significantly worse than any recession since World War II. We are seeing a severe decline in economic activity and in employment, and already the job gains of the past decade have been erased. Since the pandemic arrived in force just two months ago, more than 20 million people have lost their jobs.

There are three key takeaways from Powell’s speech. One is negative, while two are good for the gold market. Let’s start from the bad news. The Fed Chair rejected the idea of negatice interest rates. He noted that the evidence on the effectiveness of these monetary policy experiments conducted by the Bank of Japan and the European Central Bank “is very mixed”. Powell was very clear on this issue:

I know that there are fans of the policy, but for now it’s not something that we’re considering. The committee’s view on negative rates really has not changed. This is not something we’re looking at.

This is bad news for the gold market, as the yellow metal shines when real interest rates are very low or even negative. The introduction of NIRP could push the yields even lower. Given that some traders started pricing in expectations that the Fed will push interest rates below zero next year, Powell’s remarks could be interpreted as more hawkish than expected and, thus, as negative for the gold prices.

However, there were also dovish elements in the speech. First, Powell acknowledged something we have been repeating since the very beginning of this epidemic: the V-shaped rebound is unlikely and there are important downside risks on the way to recovery. He said:

What comes though is there is a growing sense I think that the recovery may come more slowly than we would like (…) The path ahead is both highly uncertain and subject to significant downside risks.

These grim words pushed the stock markets down on Wednesday. Importantly, Powell noted that the longer the recession takes, the more problematic it might become, as “the passage of time can turn liquidity problems into solvency problems.” It means that although the easing of the economic lockdown should support the economy, we could see more problems and possibly more bankruptcies on the way (J.C. Penney is planning to file for bankruptcy as soon as tomorrow). The implication is that the safe-haven demand for gold should remain robust for a while, and gold is still a good portfolio’s diversifier.

Second, although Powell rejected negative interest rates, he suggested that the Fed’s policy toolkit could expand in the future. He said that while the Fed’s response to the crisis “has been both timely and appropriately large, it may not be the final chapter”. Moreover, Powell’s remarks seemed to be designed to put pressure on Congress to do more to support the economy. He reiterated that the Fed has “lending powers, not spending powers,” and he noted that “additional fiscal support could be costly but worth it if it helps avoid long-term economic damage and leaves us with a stronger recovery.”

It means that we could see more fiscal deficits  and even higher Federal debt in the near future. As a reminder, Congress has already spent $2.9 trillion to fight the coronavirus pandemic and the House controlled by Democrats wants to add a new $3 trillion relief measure, despite the fact that the federal government ran a budget deficit of $737.9 billion in April, compared with the surplus of $160 billion in the same month last year, as the chart below shows. 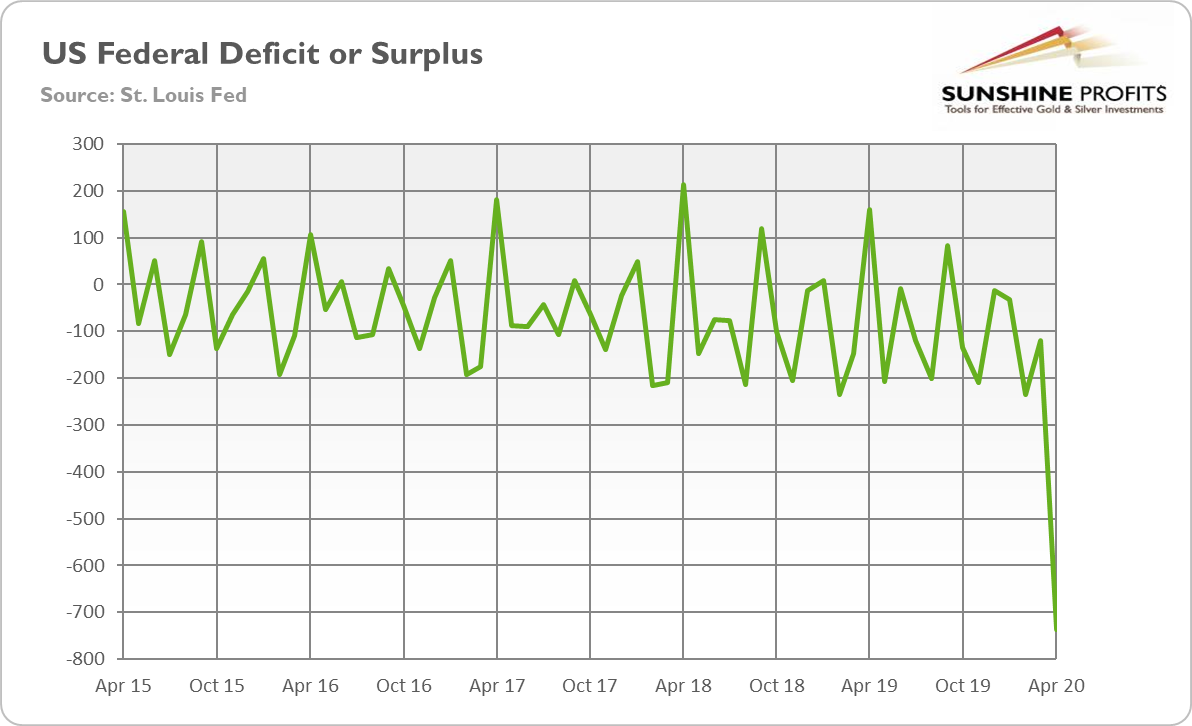 Normally, higher public debt could drive up interest rates, but the Fed is ready to buy as many Treasuries as needed to keep bond yields at ultra low levels. However, we cannot exclude that at some point, the high federal debt could weaken the US dollar or lead to a sovereign debt crisis, supporting gold prices.

Summing up, Powell gave a speech yesterday. He rejected negative interest rates, but he suggested that the recent Fed’s measures are not the final chapter. As the recovery will be slower than many people still count on, while the uncertainty will be elevated, the Fed and the Treasury will remain dovish – all this means that the fundamentals of the gold market, which were bullish even before the pandemic, have become even more bullish now.

One thought on “Powell Sends A Message With Love For Gold”