COVID-19 is devolving into a political cancer: mail-in-ballot elections.

Hence, Democrats have triggered a new malignancy, under the guise of preventing polling sites from becoming vectors for COVID-19.

From this year’s remaining primaries through Nov. 3’s general election, Democrats are going well beyond merely granting requested absentee ballots to the elderly, infirm or itinerant (e.g. President Donald J. Trump, who was at the White House, not Mar-a-Lago, during Florida’s March 17 GOP primary).

Instead, Democrats from California to Nevada to Michigan offer this metastatic mischief: Spew ballots promiscuously, as if through a fire hose, at all registered voters, including inactive ones.

What could go wrong?

Americans scarcely concerned with politics—many automatically enfranchised by DMVs—receive unsolicited mail-in ballots. Some discard them, along with unwanted sweepstakes pitches and credit-card deals.

Once ditched, these orphaned ballots can be swiped, filled and dropped into the closest mailbox. Who needs pesky poll workers demanding that voters be alive, know their names, recall their addresses, provide correct signatures, and (in 10 states) present proper identification?

This nightmare is unfolding in Clark County, Nevada, where officials buckled to Democrat pressure and mailed ballots to some 200,000 inactive voters, ahead of June 9’s primary.

Sacred ballots—whose free exercise inspired American GIs and civil-rights pioneers to sacrifice their lives—have escaped voters who moved on or passed away. They now languish by the thousands in unguarded post-office trays, on condominium sidewalks, and trash cans in Las Vegas apartment buildings.

Colorado, likewise, sent mail-in ballots to its entire electorate in 2014. Some apathetic folks hurled several into a Post Office waste basket. Concerned citizens rescued and shared them with me. 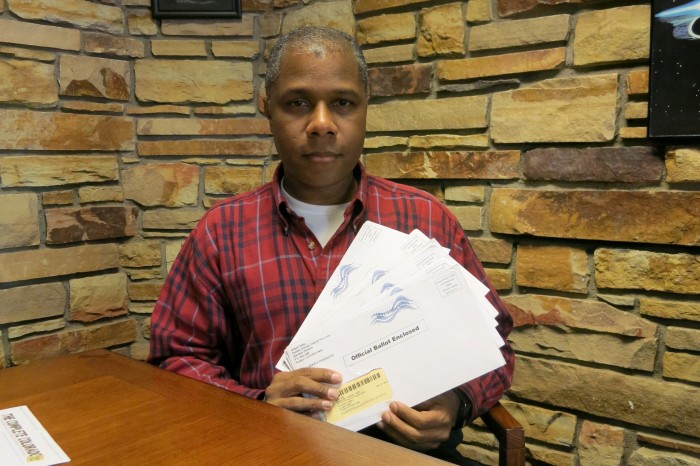 Deroy Murdock poses with six discarded Colorado ballots from the 2014 election that were sent to him by concerned citizens. / Photo courtesy of Deroy Murdock

I—a New Yorker—held six mail-in ballots in my hands and could have cast them for Republican Cory Gardner, then locked in a tight U.S. Senate race against incumbent Democrat Mark Udall.

My fraudulent votes likely would have counted. I merely needed to forge each voter’s signature on the return envelope and hope that overseers could not distinguish my phony John Hancock from each genuine e-Hancock, on file, while some 2 million mail-in ballots were counted on Election Night.

Such fleeting inspections are too much for Democrats like Nervous Nancy. The Speaker’s recently adopted, 1,815-page, $3.3 trillion epic spend-o-rama, curbs signature validation and forbids “Notarization or witness signature requirements.”

Nevada Democrats, no coincidence, are suing to stop signature verification. Why do Democrats oppose authentic signatures?

“There is no evidence of mail-in ballot fraud!” lazy, hyper-partisan, left-wing journalists scream in unison.

A priceless Heritage Foundation database documents 1,110 criminal convictions for vote fraud, including 109 for “fraudulent use of absentee ballots” since 2008.

Among them, a 2018 North Carolina congressional election was de-certified and repeated after a Republican “absentee-ballot scheme” collected, completed, and submitted blank mail-in ballots.

If COVID-19 disappears, Americans should vote in person, as we did for centuries, before Democrats defined voting down and encouraged citizens to cast ballots in their bathrobes, while watching MSNBC.

Ballots lie on the sidewalk outside an apartment complex in Las Vegas on May 16, 2020. / Photo Courtesy of Jim M, Fox News via Deroy Murdock

But what if COVID-19 rears its hideous head next fall?

• Atop underappreciated poll workers, ask America’s beloved first-responders to man the polls, while off duty. Ditto the equally civic-minded National Guardsmen and military reservists, in dress uniforms, rather than battle fatigues.

• Ushering at the polls could be a community-service option for lowest-level offenders.

• A tax credit might lure additional citizens to supervise precincts during a 24-hour Election Day.

These and other solutions could excise the throbbing tumor that is 2020’s mail-in ballot craze, before it overwhelms America’s body politic and its sustaining feature—reliable, democratic elections. To paraphrase Rahm Emanuel: Never let a constitutional republic go to waste.

Deroy Murdock is a Manhattan-based Fox News Contributor, a contributing editor with National Review Online, and a senior fellow with the London Center for Policy Research. Bucknell University’s Michael Malarkey contributed research to this opinion piece.

One thought on “MURDOCK: Dems’ Mail-In-Ballot Scam an Undeniable Reality”