Skip to content
HomeAmerican Colleges Are Headed for a Meltdown

The emptying out of schools and the mass transition to distance learning has already been “the largest all-sector hit that we’ve ever seen,” Jim Hundrieser, a vice president with the National Association of College and University Business Officers (NACUBO), told the Washington Free Beacon. But the challenges of this spring pale in comparison to the shock many colleges are expecting in the fall, when social distancing measures and a possible second wave could create the most surreal semester ever.

That strangeness, experts project, could in turn cause a massive drop in college revenue. Well-endowed colleges and big research schools have the savings to weather those effects. But many schools are beholden to semi-annual tuition payments, which are about to undergo the biggest shock since the Second World War.

The result could see the shuttering of many universities, particularly small liberal arts colleges, accelerating a trend of rising closures since the Great Recession. At the same time, experts predict, the drop off in demand will be temporary, as a prolonged recession sends millions back to school—resulting in renewed profits, and power, for the schools that make it through to the other side.

When 20 million college students return to school this fall, their campuses will look very different. Schools are considering shortened school years, smaller class sizes, and keeping classes partially virtual. In addition to social distancing measures, Purdue University will use its on-campus laboratory to test students and trace contacts. The California State University system will be entirely online through the fall—its University of California sister schools are expected to follow suit.

These changes will radically alter not just campus life, but schools’ balance sheets.

The net effect will be monumental. Hundrieser, whose organization represents over 1,900 schools, predicted that the crisis “will transform the finances of a lot of institutions, and they’ll have to be incredibly fiscally prudent and innovative in order for them to rebound in a year.”

“The effects of this crisis are likely to be much larger than the Great Recession,” Kelchen said.

Universities, Kelchen explained, have four sources of income: tuition, public funding, on-campus fees (for housing, food services, etc.), and donations/endowments. Those funding streams are not equally distributed, however. Among 768 endowments surveyed by NACUBO, more than half of the value was held by the top 25, just 3 percent of schools. 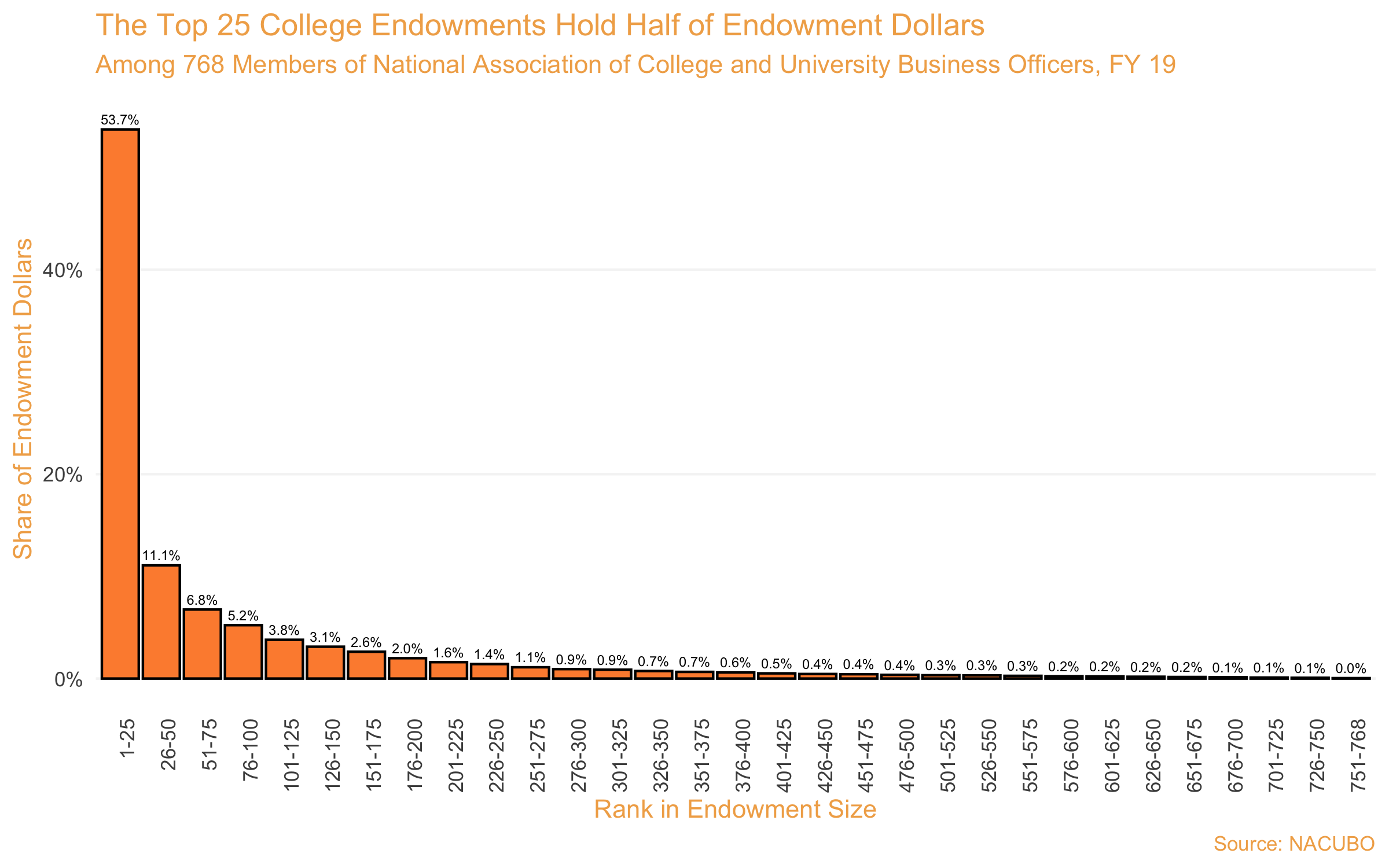 Research funding is similarly concentrated: Data from the National Science Foundation show that the top 5 percent of recipient universities get over 60 percent of federal research dollars.

Wealthy Harvard or well-funded Johns Hopkins can smooth the coming bumps. But most colleges are dependent on either state budgets that are rapidly drying up, or on tuition and activities payments.

That explains why universities are scrambling to reopen. As Brown University president Christina Paxson wrote in the New York Times, “remaining closed in the fall means losing as much as half of our revenue.” Even larger schools are afraid. Cornell University has a $7.3 billion endowment, but its president recently wrote that without a reopening, the school is looking at “hundreds of millions” in losses.

Unfortunately, absent a medical miracle, any reopening will only be partial—which still means substantial losses.

College costs a lot, over $40,000 at the average four-year school. For that much money, students expect the full package: not just classes, but the extracurriculars, parties, and social connections that come with attending a college.

Corona-college will be nothing like that, leaving many education consumers considering other options. Some will just be unwilling to keep forking out for online courses: Georgia resident Alex Popovich told the Free Beacon that his daughter, who is a freshman at William & Mary, is considering taking a semester off or taking classes at a local university in the fall if her school remains online.

Others are worried about in-person education: Thirty-five percent of students in a recent poll said that if colleges reopened in the fall, they would either only attend online (31 percent) or not attend at all (4 percent). Others are indecisive. One in six were considering taking a gap year as of April.

Those numbers might change further as it becomes apparent that many classes will remain online—63 percent of current students say e-learning is worse than in-person classes. Tuition will also be disproportionately affected by declining foreign enrollment, as foreign students generally pay full price.

Even if colleges manage a partial reopening, therefore, they will inevitably take a hit to their revenue. That’s a recipe for financial disaster. As Paxson put it, “It’s not a question of whether institutions will be forced to permanently close, it’s how many.”

Which colleges will be hardest hit? Kelchen said he was most worried about “small, rural private colleges,” where students will be less willing to travel to or live. Losing tuition and housing revenue, Kelchen said, “will be more than these colleges can handle.”

Beth Akers, a higher education fellow at the Manhattan Institute, thinks the colleges most at risk are “the expensive institutions that are offering that kind of boutique college experience, but ones that aren’t sitting on the pile of cash that could help them weather this kind of storm.” Loeb noted that “many small liberal arts schools” were in financial straits even before the crisis began, adding “that difficulty will likely increase.”

Will all of this mean the end of college education? Probably not—paradoxically, colleges which weather the crisis may find themselves on the other side with too many students, not too few. If one in six students take a gap year, then the fall of 2021 will see student populations swell.

There will be even more students if the current financial crisis persists and, as experts project, unemployment remains elevated. That’s because in a recession, people return to school; college enrollment rose by 13 percent between 2007 and its peak in 2011.

“People like to go back to school” when unemployment is high, education policy expert Preston Cooper told the Free Beacon. “They say, ‘the labor market’s really weak right now, there aren’t a lot of job opportunities, this is my opportunity to go back and get that degree I always wanted.'”

Many of those who return will go back for associate’s degrees, as enrollment in two-year colleges rose disproportionately during the Great Recession. Online colleges will likely also do well, as they have the infrastructure in place to absorb recession demand immediately. But high-prestige universities will benefit indirectly. The same demand, paired with lower supply, will necessarily lead potential students to attach more value to degrees.

Higher education resembles many other industries facing the coronavirus crisis. The small players look set to be decimated by the coming storm, while the ones that are big and wealthy enough to survive will wield even more power on the other side.

One thought on “American Colleges Are Headed for a Meltdown”