“I think there is a strong likelihood we will need another bill.”

That’s according to Treasury Secretary Steven Mnuchin, who supports additional fiscal stimulus to combat the economic impact of the novel coronavirus—within reason.

The secretary’s statement comes after the House passed a record-shattering $3 trillion relief package, though leaders in the Senate have said they will not put it up for a vote. Senate Majority Leader Mitch McConnell has made it clear that the next coronavirus bill “cannot exceed $1 trillion,” according to reporting by Axios.

Even so, the U.S. government’s response is already massive, dwarfing anything that’s come before it. 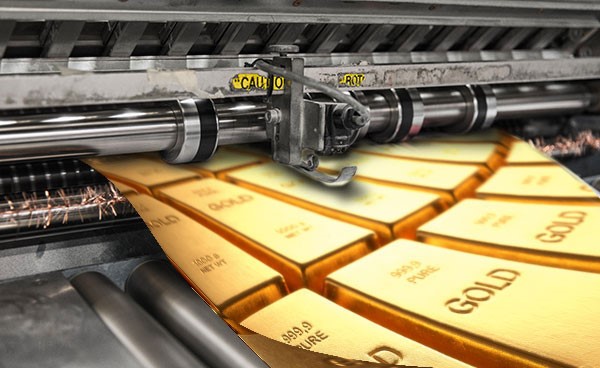 Across the pond, Britain’s government is likewise spending like crazy. The U.K. budget deficit widened to a record 62.1 billion pounds ($76 billion) in the month of April, equal to the government’s total borrowing in 2019, according to Bloomberg.

Against this backdrop of anything-goes spending, the idea of having a national currency backed by a real asset like gold seems less and less crazy to some. Doing so, it’s believed, would force lawmakers to practice fiscal discipline, reign in inflation and normalize international trade.

Judy Shelton, President Donald Trump’s nominee to the Federal Reserve Board of Governors, has long favored a return to a gold standard, which officially ended in 1971. In an interview with Investment News Network (INN) last week, Shelton said she liked “the idea of a gold-backed currency,” adding that “it could even be done in a cryptocurrency sort of way.”

Although the chances of the U.S. returning to a gold standard are slim to none, I think it’s incredibly important in this time of economic uncertainty to ensure you have a 10 percent weighting in gold and gold mining stocks. I call this the 10 Percent Golden Rule.

The 10 Percent Golden Rule is rational and prudent. The U.S. government and Federal Reserve can’t pump this much money into the financial system and not trigger rapid inflation—and potentially even hyperinflation.

There’s one thing that can’t be printed, and that’s gold. In fact, we may be looking at peak gold supply right now, which should only help the precious metal retain its value as cash deteriorates.

Group of Seven central banks made net asset purchases of $2.5 trillion in March and April together. In April alone, these purchases were an unbelievable $1.3 trillion, nearly five times more than the previous peak of $270 billion in April 2009, according to Bloomberg data.

As of last week, the Federal Reserve’s total assets stood at a record $7.04 trillion. That’s a third of the entire U.S. economy. 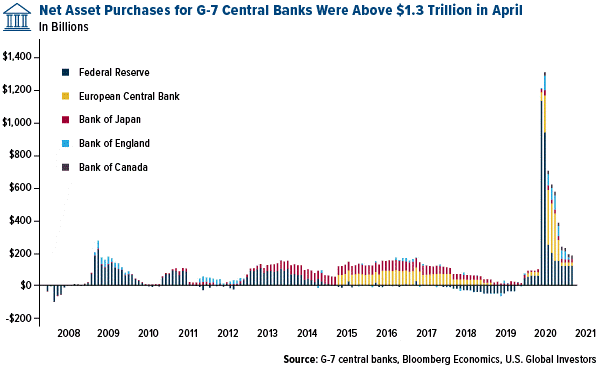 You may have heard that the Fed has been buying ETFs that invest in corporate debt, as part of its emergency lending program intended to support corporate debt markets. In the first six days of the program, as much as $1.8 billion worth of such ETFs were purchased.

These are all incredibly large numbers. Fed Chairman Jerome Powell himself acknowledged this during a 60 Minutes interview last week, stating that the bank’s recent actions are “substantially larger” than they were during the last crisis.

And just check out this remarkable exchange:

SCOTT PELLEY: Fair to say you simply flooded the system with money?

POWELL: Yes. We did. That’s another way to think about it. We did.

PELLEY: Where does it come from? Do you just print it?

POWELL: We print it digitally. So as a central bank, we have the ability to create money digitally. And we do that by buying Treasury bills or bonds for other government guaranteed securities. And that actually increases the money supply. We also print actual currency and we distribute that through the Federal Reserve banks.

Growth in M2 money supply—which includes not just cash but also savings deposits, money market funds and other “near” money—has historically been like Miracle-Gro for gold prices. As of May 11, the percent change in money supply from a year earlier was greater than 23 percent. That’s the highest rate since at least 1981, the furthest I could go back on the Federal Reserve Bank of St. Louis’ website. 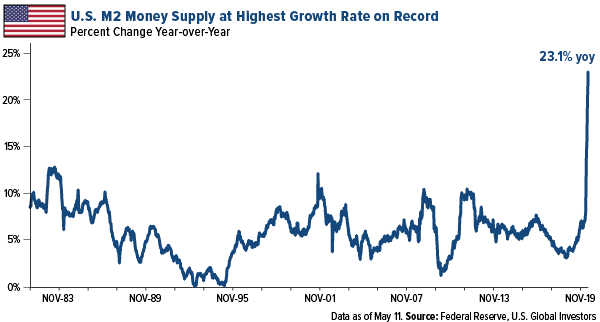 U.K. Bonds Now Have a Negative Yield. Is the U.S. Next?

Gold has also benefited from low to negative rates, which are likely here to stay for some time.

Last week the U.K. sold bonds with an average yield below 0 percent for the first time ever. The yield on the two-year gilt dropped as low as negative 0.080 percent. The five-year yield traded at negative 0.043 percent. 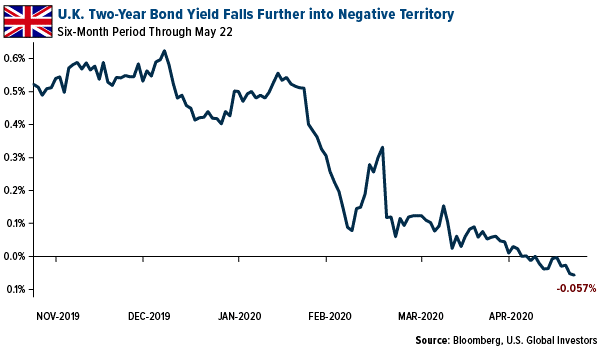 Meanwhile, Bank of England (BoE) governor Andrew Bailey admitted last Wednesday that a negative interest rate policy (NIRP) was in “active review,” despite saying in March that negative rates were “not an area I would want to go to.”

That’s why I don’t have a whole lot of faith when New York Fed president John Williams says that “negative rates are not the right tool to be used right now.”

It may only be a matter of time before subzero rates make landfall in the U.S., something President Trump is in favor of. “As long as other countries are receiving the benefits of Negative Rates, the USA should also accept the ‘GIFT,’” he tweeted on May 12.

Other financial experts and money managers are similarly making the case for gold and other hard assets as helicopter money floods the economy.

“This is a perfect environment for gold to take center stage,” wrote Paul Singer, billionaire hedge fund manager, in a memo to Elliott Management clients. “Gold today, despite its modest run up in recent months, is the answer to the question: Is there an asset or asset class which is undervalued, underowned, would preserve its value in severe inflation, and is not adversely affected by COVID-19 or the destruction of business value that is being caused by the virus?”

Macro investor Paul Tudor Jones sees gold rallying to $2,400 an ounce and possibly to $6,700 on extreme inflation reminiscent of 1980. (And he also likes bitcoin, for the same reason.)

Finally, in a viral tweet, Robert Kiyosaki of Rich Dad Poor Dad fame sounded off on the “incompetent” Fed before predicting $3,000 gold within a year and $75,000 bitcoin within three years.

One thought on “You Can’t Just Print More Gold”