One look at the chart of the U.S. financial markets against the backdrop of economic paralysis and suffering and one is immediately filled with a myriad of emotions. Sympathy for those that have been afflicted by the most recent pandemic; fear for the families whose primary breadwinner is now unemployed; confusion toward the proper course of action going forward; and finally outrage at the abject timidity of our citizens in responding to the orders laid down by these insipid politicians in response to the crisis.

As the welfare of future generations hangs in the balance, its tentativeness the direct result of government ineptitude, I keep asking myself a critical question: “When did the backbone of our people turn to mush?” If someone holding political office had told my grandfather to stop ploughing his fields or tending to his livestock because a sickness was spreading throughout the community, that charlatan would have wound up with buckshot adorning his gluteus maximus. How dare any group of elected bureaucrats ordain the shutdown of an economy?

Telling citizens to “Stay home” and “Avoid contact” was tantamount to telling my grandfather to cease and desist in providing for his family; that he should shutter the ploughs and the reapers and the milking stations; that his sons and daughters need not feed the chickens or slop the hogs because the government was going to “protect them” from harm. Well, not only would promises like that go unheeded by the generations that preceded us; they would be treated with the utmost of distrust and the vilest of response. The reason that citizens of North America fled Europe and the British Isles to become settlers in the New World was because acceding to government orders and laws and rules and edicts had left them wallowing in a sewer of social and economic slavery while the elites inhabiting the privileged classes prospered. Sadly, over the last century or so, starting around 1934 with the creation of the first U.S. “central bank” (The Federal Reserve), citizens have been purposefully softened by the availability of social safety nets that started innocently and well-intentioned in the 1930’s with programs like the Tennessee Valley Authority and later Freddie Mac and Fannie Mae but at every sniff of an economic downturn, political responses have grown progressively more rapid and more extreme. With the mainstream media (which is now social media more than print or TV/radio media) providing a wonderful symphony of accompaniment, the political grandstanders have been able to generate a cavalcade of panic which has provided the perfect cover for clandestine enrichment of the corporate sector, once again as in 2009 from the public purses on the pretense of economic Armageddon.

Fellow citizens, I ask you: How many times must you be subjected to this moral hazard rot before you arm yourselves with torches and pitchforks and enact change?

Back in late February when the fear mongering was just shifting into gear, I was ranting and raving about the REPO operations back in late September and asking why the Fed was bailing out the hedge funds. I was waving the red warning flag long before COVID-19 conveniently arrived on our doorsteps to present a “Clear and Present Danger” to all aspects of western civilization to the extent that the U.S. central bank alone has authorized an injection of $10 trillion into the corporate pig trough and that is a pittance when one adds the BOJ, the BOC, the ECB, the PBOC, and all of the other purveyors of counterfeit currency to the mix.

Where was it ever written that an elected official has the right to impair the purchasing power of years of labour and prudence and savings of the average citizen? What gives ANY politician the right to debase my money upon which I deserve to rely as I move into retirement?

You must forgive me for sounding like a bitter, disillusioned old man but the events of the New Millennium are growing more and more apocalyptic as the days wear on. Today I read that the CDC (Center for Disease Control) has agreed with the findings of scientists from Yale and John Hopkins and have determined that the mortality rate for the current pandemic is no different than any other strain of infectious virus. In other words, whether or not these political wand wavers ordered work stoppages or not, the same rate of fatalities would have occurred. Whipped up into a media frenzied print-fest, the Fed and the U.S. Treasury just trashed your savings, your pensions, and your social security by assuming leadership of a crisis for which not one person was either qualified to assess nor capable of managing. The “Clear and Present Danger” was not the pandemic; it was the politicians and the money changers inhabiting the temple.

What markets? There are no “markets” anymore. All I see when my quote terminal starts flashing these days is the NY Fed’s omnipotent computer programs whirling away assigning their desired price objectives to literally everything. Yield curve moving back to inverted? Nope – buy all short-dated bonds until the 2-year yield is down. 30-year yield moving lower? Nope-sell the hell out of the 30-year until we get that yield well above the 2-year. Stocks looking a tad weepy? Nope – buy a 500-lot of the E-mini’s and trigger the algo’s to the buy side. And gold! What the hell is it doing at $1,750? Offer three times annual global production $40 under cash and we can easily fix THAT problem, too! Everywhere I look I see criminal interventions making it impossible for me to apply the skills I learned over 40 years to the practice of managing risk.

The near-term outlook for stocks is now locked within the walls of the Eccles Building in Washington; the models that have been constructed have no historical precedent upon which to rely. These economists all disagree on every point except one: credit creation. Since all they really understand is the process of debt application to solve all problems of a fiscal and monetary nature, the pandemic now provides an entirely new bogeyman to be vanquished through monetization. Adding a health crisis to the banking crisis of 2008 and the liquidity crisis of October 2019 (when the REPO ops began in earnest), their models completely and conveniently omitted the underlying systemic cause of disruptions which, of course, is debt.

I learned long ago that after periods of sustained credit creation in any society, there comes a moment when the marginal benefit of one additional dollar of debt has zero impact on either GDP or money velocity, with the latter more important than the former. The world passed that threshold in 2008 and was beginning the violent and deflationary process of debt destruction when the international banking cartel, led by the Wall Street/Washington ringleaders, held out their hands and after using the MSM to spread panic throughout the campaign headquarters of the political classes, secured permission to reverse the debt elimination process through an unprecedented credit creation orgy that papered over the insolvency and illiquidity of the purging process. Sure enough, the policy makers discovered the impossibility of reversing an exploding debt bubble and that you can no more assuredly reverse a credit bubble’s popping than you can the direction of the St. Lawrence River. You can divert the flows temporarily, but you can never reverse them. The first signs of the return of the credit reckoning came last autumn with the “not QE” REPO operations that were all centered around the growing illiquidity in the treasuries markets which then began to bubble over into corporate high yield so as the size and scale of the REPO actions were escalating wildly as late as February, the debt destruction monster was starting to become an unpopular narrative that was threatening to overshadow the China trade war and talks of impeachment and in an election year, the last thing any Republican could handle was the re-emergence of this credit “hydra”. Enter the Wuhan pandemic and what arrived in the nick of time was the perfect cover for yet another debt-fueled diversion of the credit reckoning but this time, unlike 2009, the money-printing bazooka used by Hank Paulson has been replaced by a fifty-megaton nuclear weapon of mass distraction designed to keep the citizenry terrorized and under control. 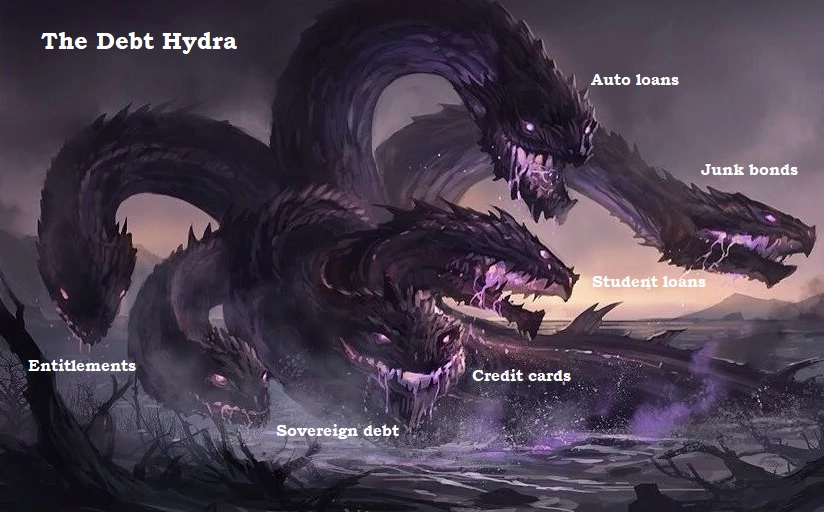 In past times, the layering of large swaths of counterfeit currency on top of systemic insolvency was done so delicately and usually with little drama or fanfare. In the 80’s when the savings and loan industry were buried in bad loans that threatened the big Wall Street counterparties, they deftly and surgically moved the problem “off balance sheet” which is a polite way of saying that they lifted the corporate governance carpet and with the flick of the broom, swept the rotting remnants of corruption, bribery, and boardroom malfeasance under, never to be seen or spoken of again. Fast forward to 2020, there are now daily press conferences with the Thespian thought-managers front-and-center, all giving opinions and pronouncements on issues over which they have no control and about which they have no knowledge. To say that I am irked by the arrogance of the self-professed “experts” in espousing forecasts on everything from mortality rates to economic recovery rates is an understatement; these blowhards have zero understanding of nor ability to predict anything related to the pandemic. Therefore, they had zero authority to make decisions affecting millions of citizens in countries all over the world and yet, they did and now we must live with their gambles on how we should live our lives.

There is only one chart to show and it is one that depicts the insanity of the day. Thanks to this coordinated orgy of preventative credit expansion, equity markets, led by the S&P 500, have roared back from the abyss. Debt-to-GDP at 140% and forward P/E’s in the never-before-seen 24 ranges are today the “new normal” and not to be feared but rather embraced because at the end of the day, there can never ever again be bankruptcies of a corporate origin because it might impact the unemployment rate and, more importantly, stocks, and if stocks are in decline, people will be afraid to spend the money they no longer have and that they lost while providing for their families after the government forced their employers to stop all operations. 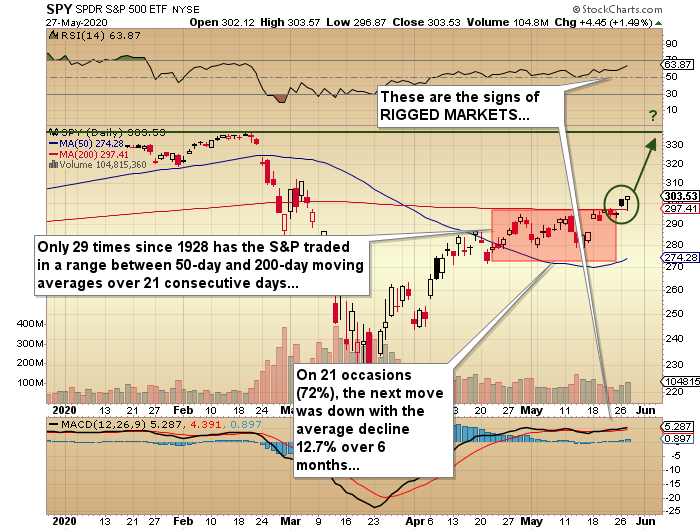 I watch riots breaking out in Minneapolis and now L.A. over yet another racially-charged police action causing the death of a citizen and firmly believe that this is going to become an accelerant to the outrage that is simmering on the back burners in households all across the globe. The SPY looks like it wants to probe higher and quite possibly test the February pre-COVID highs but from my perspective, valuations are absurd and joined by risks that are now even higher than I sensed in February when I urged subscribers to short the SPY at 326. Will I short the SPY again any time soon? Well, if I am in a Las Vegas casino and I see the pit boss whispering to a croupier about a player on a “roll”, I can promise you that I will not be joining that table any time soon. There are just too many big players that want to see stocks higher and bonds and gold “controlled” and until I have certainty that the trillions upon trillions of Fed credit bestowed upon the Wall Street crowd is not aimed at the stock market and Donald Trump’s re-election, I will be happy to keep the bulk of my investible cash exactly that – in cash – and with an overweight position in gold and silver junior developers with ounces in the ground and fortunes to be made when the levee finally breaks and the oceans of toxic debt flood the fields.