It’s all government’s fault, right? After all, the Great Lockdown was introduced by the federal and state governments, wasn’t it? Well, not quite.

Before I will explain why, let me clear one thing up: I’m a liberty lover and I’m skeptical about the government regulations. And the economic shutdown was obviously untenable – the only reason to shut down the economy was to buy some time to prepare the healthcare system for better handling of the epidemic. So, it’s good that the Great Lockdown is ending.

However, the truth is that the economic shutdown was only partially triggered by the government. While in part it was caused by the bottom-up actions of millions of people who were afraid for their health. Indeed, the data shows that many residents essentially began imposing a lockdown on themselves before their government did. For example, the electricity usage indicates that people became homebodies well before they were required to do so. Similarly, the NBER working paper written by Felipe L. Rojas and others writes:

most of the economic disruption was driven by the health shock itself. Put differently, it appears that the labor market slowdown was due primarily to a nationwide response to evolving epidemiological conditions and that individual state policies and own epidemiologic situations have had a comparatively modest effect.

Many employers sent their employees home long before any official measures. Many workers reduced their labor supply, while many consumers reduced their shopping activity long before any national or state restrictions. Americans and other nations did not need their governments to tell them to stay home, they all saw what was happening in Italy. People are not stupid, and they are not like sheep who meekly await the orders of their governmental shepherd. So as Jonathan Key noticed in his excellent Quillette story:

much of the lockdown effect was imposed not by top-down fiat, but through millions of small decisions made every day by civic groups, employers, unions, trade associations, school boards and, most importantly, ordinary people.

OK, but why are we writing about this? Well, just as many people blame the governments for the economic shutdown, they also hope that the end of the Great Lockdown will quickly revive economic growth. Unfortunately, these hopes are unfounded. The government decrees do not work as a sort of magic wand that first knocked the economy to its knees but now it will bring it to life.

What does it mean? There will be no V-shaped recovery. Just deal with it. People are afraid – rightly or not – of the new coronavirus. Yes, the mortality rate is not high, but it is several times higher than in case of influenza. And even if it kills only a small percentage of infected people, it can cause serious long-term health complications such as lung scarring, heart damage, lower testosterone level in men, and neurological and mental health effects.

So, it should not be surprising that customers won’t rush to shopping malls, cinemas and restaurants after the Great Unlock. The uncertainty and fear will remain for some time, perhaps even until the arrival of an effective treatment or a vaccine. As a consequence, many shops and restaurants will not reopen after the strict shutdown ends. As a reminder, the restaurant industry itself accounts for about 16 million US jobs.

And some changes in the labor market will also have permanent effects. As Victoria Gregory and others in another NBER working paper show, the pandemic will “have long-lasting negative effects on unemployment. This is so because the lockdown disproportionately disrupts the employment of workers who need years to find stable jobs.” The conclusion is clear: the economy will not quickly return to the pre-pandemic state and trajectory.

What does it mean for the gold market? The lack of V-shaped recovery is good news for gold. The persistent uncertainty and fear should support the safe-haven demand for gold . The weaker than expected recovery will cause the Fed and Treasury to maintain their dovish monetary and fiscal policies, which should also be positive for the yellow metal. To be clear, we do not claim that gold prices will necessarily rally like crazy. Rather, we argue that the Great Unlock does not have to be very negative for the yellow prices, because it will not be a reverse of the Great Lockdown, and the return to normalcy will be only gradual. 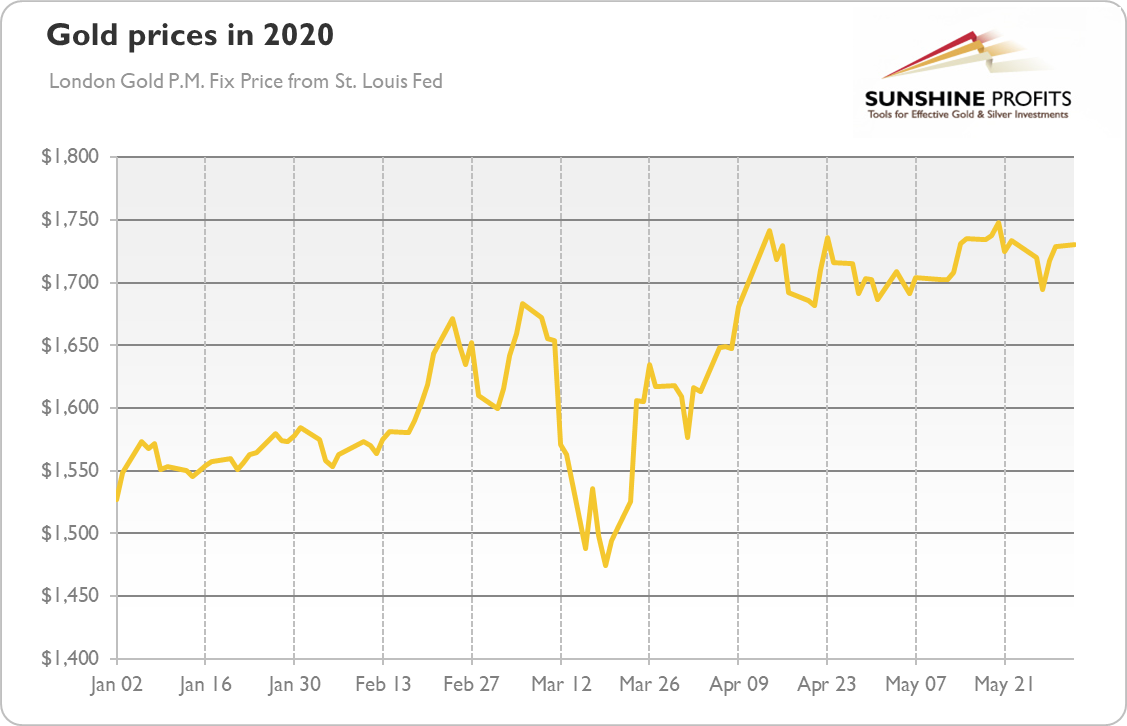 Indeed, as the chart above shows, the easing of government regulations did not send gold prices down. Actually, gold moved further north in May. And the fundamental outlook for gold – which includes low real interest rates, elevated uncertainty, dovish Fed and mammoth fiscal deficits– should remain positive.

One thought on “Will Great Unlock Push Gold Prices Down?”