The Federal Reserve has printed trillions of dollars without generating runaway price inflation through the use of a neat trick.

The privately owned bank cartel shovels the bulk of the money to Wall Street banks and not to the public at large. Instead of millions of Americans rushing out to bid up prices on consumer goods, a relative handful of bankers is using the free money to bid up asset prices and then pay themselves huge performance bonuses. 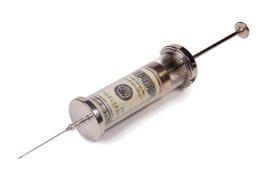 It’s quite the racket. Fed officials have been able to point at stock prices as “proof” of how they successfully engineered an economic recovery.

Wall Street is the true beneficiary of all the largesse and Main Street doesn’t ask too many questions as long as the stock market is roaring higher.

Things have to be good, right?

Except now Americans noticing that Fed policy is horribly unfair. The distribution of recent stimulus funds from the Fed and Congress is so lopsided it’s outrageous. Politicians printed and borrowed roughly $6 trillion – the equivalent of $30,000 for every adult in the US.

How much of that cash did people actually see? About $1,200 if they were eligible for assistance.

And since Congress borrowed 100% of those funds, Americans are expected to pay it back. They’ll have to add it to their tab.

The trillions the Fed created were injected to buy Treasuries, lend into the repo markets and to make bond purchases. In theory, these funds will have to be paid back too. Since the Fed is never audited and doesn’t have to provide detail on Fed loans, we have to take their word for it.

We aren’t the only ones covering the ridiculous gap between what the Fed and Congress will spend to support bankers versus the rest of us. Wall Street on Parade has been watching the malfeasance for years.

The misnamed CARES Act passed by Congress in March authorized billions of dollars for small businesses. However, some of that was siphoned off by banks, including a New Jersey bank which collected $5.3 billion.

Larger, publicly traded companies with less need for emergency funding have also been cashing in on the program.

Bloomberg reports that two-thirds of the $3 trillion in stimulus money approved by Congress has been spent.

Those funds have been handed out with practically no oversight.

Fraud and mismanagement should be expected whenever Congress passes a massive spending program. If the spending program is rushed through with plenty of political cover, like the CARES act, it will be a bonanza for grifters, the special interests, and the well-connected.

Unfortunately, there isn’t much that frustrated Americans can do about it. Almost everyone in Washington (in both parties) supports what Fed and Congress have done to “stimulate” the economy thus far.

The Federal Reserve itself is entirely unaccountable to the American people. Nobody votes for the bankers in charge there, and they don’t have to tell anyone what they are doing in the markets from day to day.

There is no effective movement in Washington to restrain the central bank or limit borrowing and spending. If there ever was one, it vanished entirely over the past decade.

The outlook for sound monetary or fiscal reforms looks grim. The swindle will likely continue until frustration boils over into civil unrest or until confidence in the dollar collapses.