Now  the bubble has blown even larger.

Wolf Street divides the stock market into the “Giant 5” (Apple, Microsoft, Amazon, Alphabet, and Facebook – total market cap = $6.6 trillion) and the remaining Wilshire 3,410 stocks. The Dow hit a post-crash high on June 8, and is lower as of July 10. But the “Giant 5” have surged 14% since June 8. The Wilshire 5000 minus the “Giant 5” is down 10.9% since the February peak. Those five tech stocks caused the bubble and the new NASDAQ highs. Look out below when they crash. Examine Tesla. Does the stock price suggest a bubble? 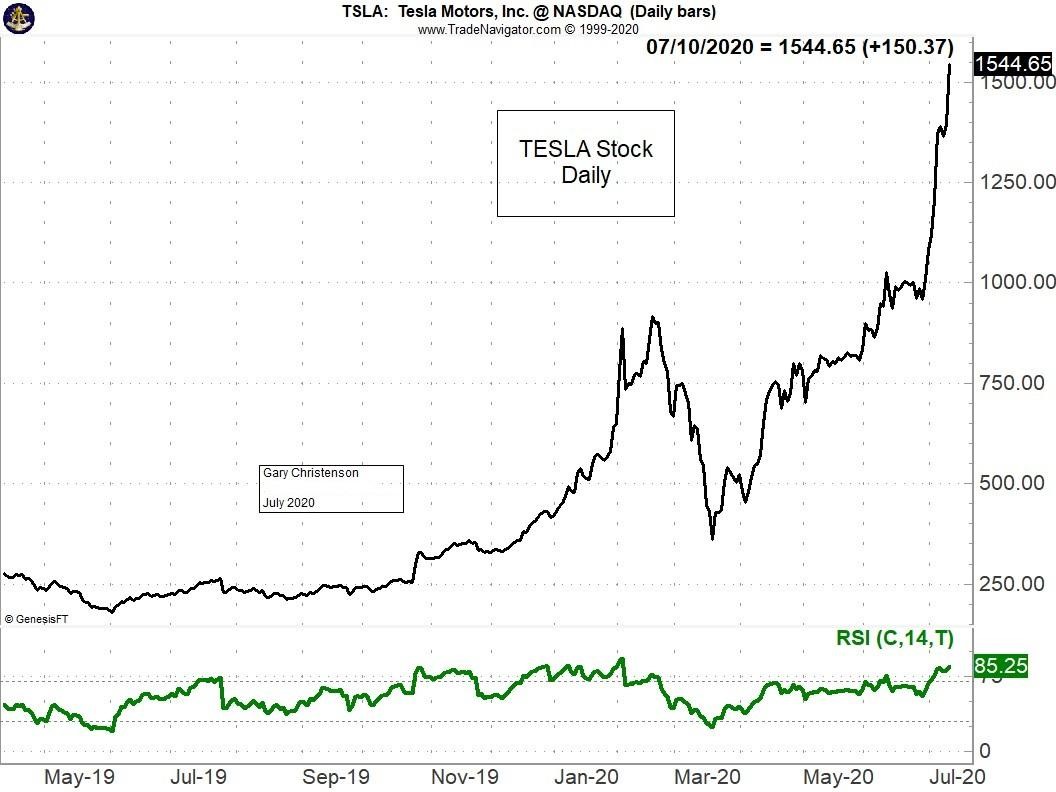 ·     Central banks created, via computer entries, well over $20 trillion in new currency units. This should encourage us to question the value of those newly created currency units. Call them fake money.

·     Interest rates have fallen to multi-decade lows because the Fed buys bonds and supports the bond markets. Without Fed support, interest rates would be higher, and the government would be less able to deficit spend in the $ trillions.

·     The Fed is monetizing U.S. government debt, a risky practice. The government deems it necessary to spend, given the COVID-19 shutdown, huge unemployment, many insolvent corporations, skyrocketing bankruptcies, election year politics, current recession/depression, and the need to buy votes.

·     Necessary or not, excessive spending has consequences. The U.S. has entered the era of MMT—Modern Monetary Theory or Magic Money Tree economics, in which debt hardly matters. Call it QE4ever or “Inflate or Die” currency creation. Call it insanity or nonsense.

·     The Fed has forced everyone to drink their Kool-Aid. This “QE4ever Kool-Aid” is poisonous to the lower 90% of Americans. The wealth of the top 1% has jumped because of the lockdown and QE4ever, but the financial security of the lower 90% is down hard.

·     The quantity and quality of coming fiscal and monetary nonsense should worry every thinking individual who wishes to protect his savings, purchasing power, and retirement funds. (Do you own enough gold?)

The Fed is monetizing government debt, a sign of trouble to come. What other programs could government and the Fed initiate that accelerate the journey to national insolvency?

b)  Universal Basic Income—income for all, work not required.

c)  Reparations to your favorite groups. Where will it end?

Riding the Fantasy Express Train toward Insolvency and Dollar Collapse

Speculating on fiscal and monetary nonsense during the next two years…

a)   The U.S. has 40+ million newly unemployed workers. They need currency units to pay for rent, mortgages, credit card bills, student loans, and… food. Assume they need $25,000 in government handouts during the next year. That is $1 trillion.

b)   Student Loans: Assume $500 billion in defaults, less than one-third of outstanding loans. If former students aren’t working, they won’t be repaying loans. Add half a $ trillion.

e)   Bailout large corporations, even though they bought back over $4 trillion in stock in the past decade. Assume they need $3 trillion. The currency units are free, so add more as needed.

f)     Well over 100,000 businesses have (or will be) closed forever. That means more unemployment, lost sales taxes, and other revenue shortfalls. Estimate another $ trillion or so to bailout politically connected businesses.

g)   Free checks to citizens, illegal aliens, dead people, and others. Government has spent $2 or $3 trillion. Assume they will distribute another $3 trillion to individuals. It might discourage rioting.

h)   Toss in another $2 trillion for miscellaneous. The Fed is “printing” so why not?

Total of the above is $16.5 trillion. It’s free, so round up to $17 trillion in excess spending and new debt during the next twenty-four months. The era of fiscal and monetary nonsense proceeds.

Total official national debt is $26.5 trillion. Add another $17 trillion of fantasy bailouts and the debt exceeds $43 trillion by the end of 2022. Assume $3 to $4 trillion in added debt for 2023—2024 and the official debt has jumped to $50 trillion in Fantasyland. Those new fake dollars will devalue existing dollars. Maybe it will take a few extra years to arrive at $50 trillion in national debt. With MMT it doesn’t matter… or does it?

Official U.S. government gold reserves (Remember –  Fantasyland) are 260 million ounces. If (supposed) U.S. gold bullion backed the national debt, the price of gold in Fantasyland in 2024 could be $200,000 per ounce.

Back to the world of The Fed, deficit spending, and politics:

·     Consider the ratio of ten times gold to the DOW Index. Gold is inexpensive compared to the inflated price for the DOW stocks. 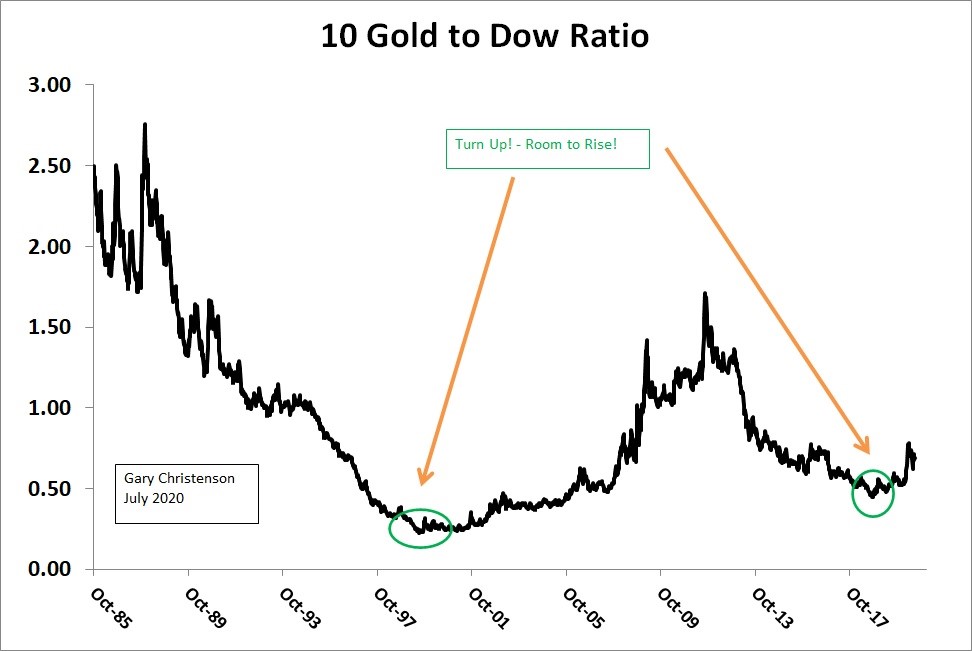 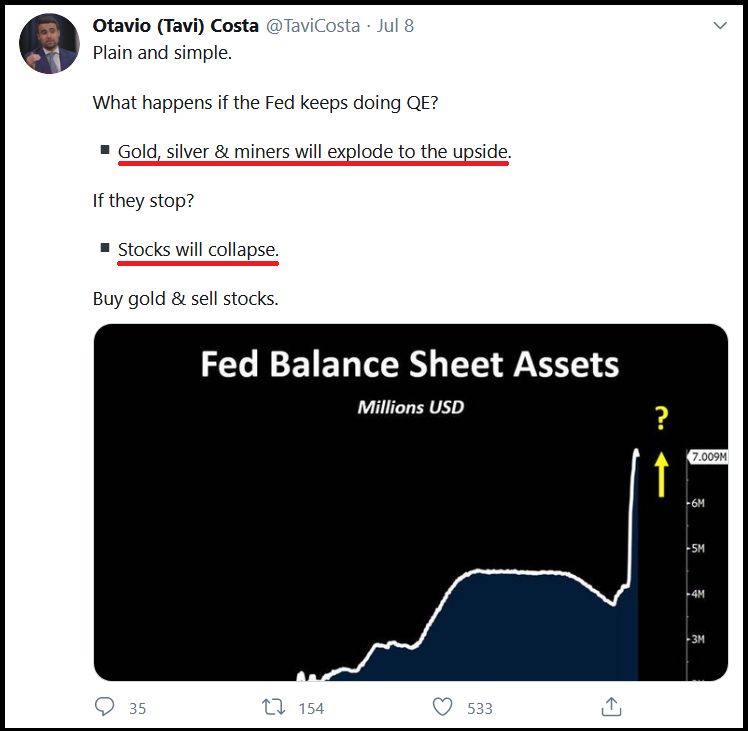 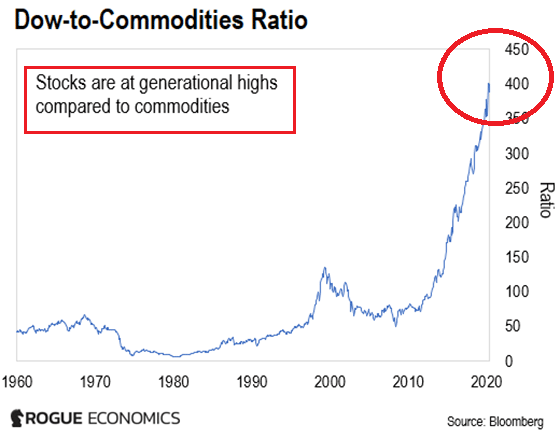 “Several key labor-intensive industries – education, lodging, entertainment (Broadway events, concerts, movie theaters, sporting events), restaurant, travel, retail, non-residential real estate, etc. – face an existential threat to their core. For these industries, they simply cannot survive the conditions they face. For these gutted industries, we face, at best, an 80% to 85% recovery in the years to come. It should be emphasized that Covid-19 just sped up what was already a secular decline.”

·     Official national debt increased $4.5 trillion in the last 12 months. Spending is “out-of-control.” The economy has fallen into a recession or depression with a collapse in GDP, employment, tax revenue, and economic activity. Debt will grow.

·     Allowing interest rates to rise to historically normal levels would “blow-out” the budget. Take $30+ trillion in debt and assume 6 – 8% interest. That means $2 trillion in federal interest payments every year. Grim!

·     There is minimal desire to control spending in congress, the administration, or on Wall Street. More spending will come, and many economists will assure us that bailouts, QE4ever, stimulus programs, expanded social programs, and a new war are essential for the economy. Meanwhile the economy has entered a recession/depression and government tax revenues will decline.

·     The bankruptcy attorneys for businesses, corporations, and individuals will get more work. Debt will be liquidated or “written down” and the recession/depression will deepen.

·     The new debt will boost prices for gold and silver, and after a correction, for stocks as the mini dollar replaces our devalued dollar. The dollar has not yet collapsed, but it’s possible.

·     Question the statements of politicians, economists, and nationally known doctors in charge of COVID-19 policy and spending decisions. With them in charge, the wealthy will become wealthier.

·     Expect much larger debt, lower governmental revenues, an enormous increase in bankruptcies, continuing unemployment, and many failed businesses. Stagflation and higher prices could be the best we should expect. Much worse is possible.

·     Many debts will not be paid. Other debt will be written down to pennies on the dollar. Those unpaid debts are another’s asset. Counter-party risk will become important. Gold and silver have no counter-party risk…Repeat: In an era where counter-party risk destroys wealth, we are safer using gold as financial insurance.

·     The Fed will sacrifice the dollar as they support stocks and bonds.

·     Stocks will correct lower and then rally as the dollar is devalued.

·     Gold and silver will exceed all-time highs and then rise multiples higher, depending on the quantity and quality of fiscal and monetary nonsense demanded by our leaders, politicians, and economists.

·     Buy gold and silver, especially silver, and sleep well knowing that your savings and retirements are protected from growing counter-party risk as debt paper is destroyed.

2 thoughts on “The Express Train To Insolvency”