The US Dollar Wants YOU!

Before I begin this weekly missive (which is being penned on a Wednesday due to my impending cruise to the northern habitats of Georgian Bay), I need to present one quote that for me summarizes everything there is to know about risk management in the capital markets universe:

It Ain’t What You Don’t Know That Gets You Into Trouble. 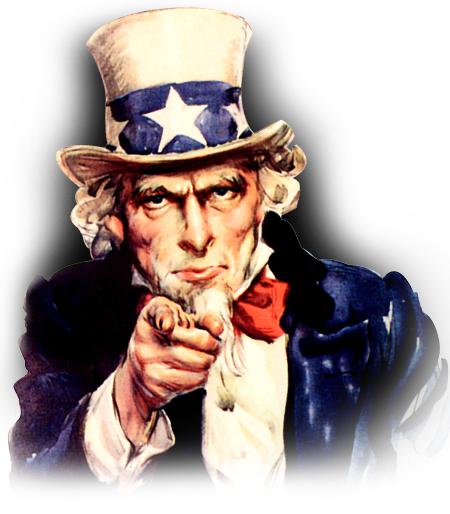 As we speak, the world is unanimously bullish on silver with gold a hair’s breadth behind…and judging from volume inflows into the SLV and GLD ETF’s, the big money boys (who are hard pressed to SPELL “inflation” let alone prepare for it) are in the process of allocating. Seeing their competitor asset managers buying into names so foreign and so hideous like Newmont (pronounced “Noo-maunt”) and Barrick (pronounced “Bare-ick”) is forcing these Tesla-trading behemoths to secure exposure in the precious metals names and the ETF’s in order to stay snug to the expected returns everyone will be getting with a 3% allocation to precious metals.

If they opt to avoid the metals, and they move 50% higher, the money manager runs the risk of “underperforming one’s peers” after which the Fund of Funds allocators throw them under a bus and they experience a 35% redemption nightmare. However, if the metals crash and they lose 50% on that 3% allocation, EVERYONE loses together, and their mediocrity provides assets-under-management protection by hiding within the (incorrect) consensus allocation to the metals. Clients actually lose money, but the manager does not lose assets. What a wonderful base case argument for owning an asset that has outlasted hundreds of fiat regimes in the last 5,000 years. 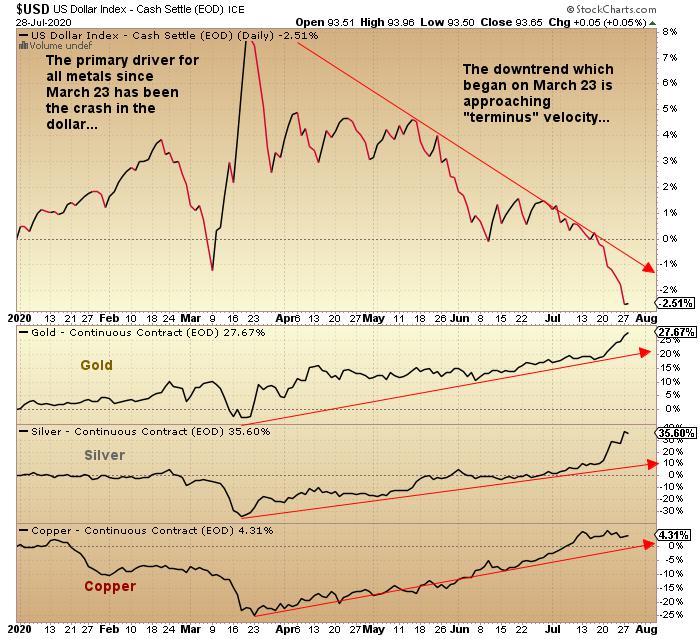 Why I included the Twain quote is that it is rooted in one of the many cognitive biases found in the world of investing. Everyone today “knows for sure” that gold and silver are headed to price levels many times higher than where they today reside; what they “don’t know that gets (them) into trouble” is WHEN (and from what optimum entry point). When I write that Daily Sentiment Numbers for silver are approaching 95 and that RSI (“relative strength index”) for SLV is at 85, that is precisely “everyone knowing for sure”. Sentiment indicators such as DSI and RSI have us ripe for a disappointment and the reason is simple: the primary driver for the March-August advance has been an anti-dollar policy initiative by U.S. political leaders and its central bank. If they start to pull back the punchbowl, the dollar will rally, and the primary PM driver gets kneecapped. 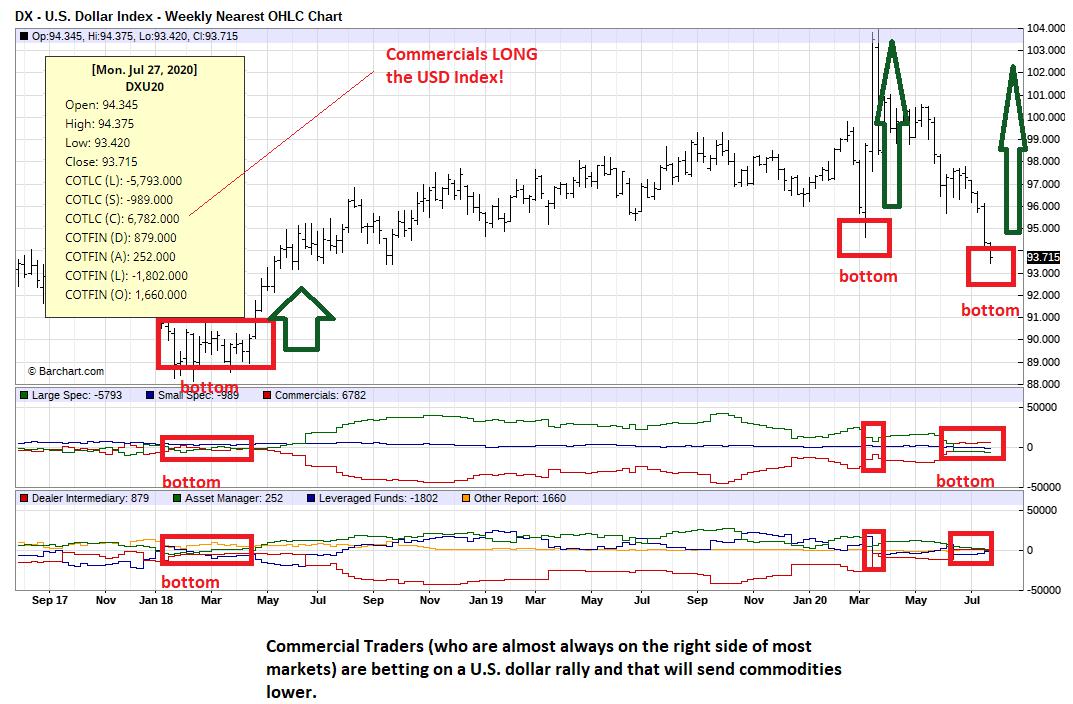 The most recent COT for the U.S. dollar index has the Commercials long 6,783 contracts whereas at most major tops, they are net short nearly 50,000 contracts. This is analogous to where we were in December 2015 with gold at USD $1,045; commercials were actually net long that week for the first time EVER (at least since I began monitoring the COT) and it was what prompted my “bottom” call that has now become a matter of legend (at least in my own mind). That the commercials traders are positioned for an advance is important, because the chart on page 2 clearly demonstrates the inverse correlation between the USD Index and the USD-denominated prices for gold, silver, and copper.

Accordingly, I am now modestly hedged using the SLV October $23 puts and underweight the Senior and Junior Miners as we await the fireworks associated with a big USD index short-covering rally that could easily morph into a face-ripper, as all of these newbie traders that have suddenly become silver gurus puke out their losing positions in a fit of Millennial outrage.

This does not translate into a sell signal for the junior developers (as discussed last week) because they are still (on a case-by-case basis) largely under-owned and under-priced.

The translation that should resonate is that we should refrain from chasing these silver names and it does not matter what the nature of the story is or how compelling a yarn the promoters are telling. This advice pertains to all GGMA holdings as well, as even the mighty Getchell Gold (GTCH: CSE / GGLDF:US OTC QB) has corrected over 20% off the 2020 high print. If I can add to Getchell in the CAD $.30’s I will happily do so for all of the reasons previously related in prior missives and email alerts.

The time for de-risking is upon us but understand that it is the last two weeks of August that has historically been my “accumulation” zone after what has usually been a dull summer. However, since the COVID pandemic has thrown many of the historical cycles out of whack, I am being a great deal more eagle-eyed this year than I have been in prior years because the bargain prices historically present in August actually appeared in March. Furthermore, since the Fed has been able to successfully thwart the deflationary impact of the lockdown (at least thus far), the correction I have been looking for has been delayed (but not avoided) until perhaps after the November elections in the Land of the Free and the Home of the Brave. So, if we go through August and prices continue to remain elevated, I will sit on my holdings modestly hedged via the SPY and SLV puts and if the madness of crowds continues to attract legion upon legion of new Miningjunkie-wannabe’s to the table, we have lots and lots of developer positions to offer at our prices versus their prices.

The bull market that began in December 2015 at USD $1,045/ounce is now over four and one-half years old and what is important to remember is the duration of past bulls; the 1970’s bull lasted nine years and the 2002-2011 bull lasted seven years. The gold price is now at all-time highs and ahead over 87% from the 2015 lows. The 1971-1980 bull advanced 2,325% ($35-$850) while the 2002-2011 bull advanced 669% ($250-$1,923) so when I consider the magnitude of debt-creation by the central bankers and the global sovereign treasury politicos, the current bull has a great deal more upside looking out to 2022 and beyond. To the extent that it is debt in the final analysis that must determine gold prices, and since it is the dollar that is in the deepest trouble looking out five or ten years, the fiat currency regime that has dominated the old-World Order becomes compromised and inevitably, financial chaos will ensue. I believe that, notwithstanding a technical rebound in the near term, the decline in dollar since March is the world losing confidence in the supremacy of the U.S. in all aspects.

In January, I told all subscribers that the problem with the world back then was not China-Russia relations or the Middle East or global warming or Black Lives Matter. I told you that it was that four-letter word that haunts every bond trader the world over: DEBT. What caused Jerome Powell to execute the “pivot” last fall? DEBT. Liquidity concerns surrounding dealer long positions in DEBT forced the REPO actions. I said then and repeat now: REPO was the starter’s pistol going off marking the race to the bottom for the credit markets and the beginning of the Great Unraveling. What caused the Fed balance sheet to explode northward in March? DEBT. Why is the Fed today buying all the toxic garbage junk bonds issued by corporate America to finance stock buybacks? DEBT.

Historians like to call these events the “bursting of a bubble” but they are more akin to the first water seeping through a crack in dam or dike. The more compromised that crack becomes, the faster the water flows and the faster the water flows, the more pressure on the crack. Eventually, the entire structure crumbles and the waters flood the countryside. This is exactly where we are. Powell and his global henchmen have been creating new DEBT to accomodate existing DEBT which is like firing a water cannon at the crack to keep back the seas. Eventually, all debt will have to be repudiated and the fiat currency regime of dollar hegemony replaced with some mechanism that prevents the destruction of purchasing power and the disrespect and humiliation of savers. That is what the global markets are now reflecting because those U.S. dollars are buying less and less of everything (stocks, gold, copper art etc.) and that is not about to change.

Your author is a multi-decade investor in precious metals and in the companies that explore for, develop, and produce them. I remain a staunch bull on gold and silver looking out to 2021-2022 but when markets go “vertical” and when the blogosphere and twitterverse all join in with a thunderous chorus of bullish harmonics, it is time to step back and take a few chips off the table.