We’ve been publishing updates recently after days when the silver price has spiked up. Now, after Tuesday’s trading action, silver trades over $26. Its price moved up over two bucks (about 8%).

The long pattern since the peak price hit back in 2011 has been that a rise in price  accompanies rising abundance. That is, more metal comes to market at higher prices. Supply and demand, and all that stuff they taught back in Econ 101.

But in recent weeks, there’s been a different pattern. Rising price has occurred with (or because of) rising scarcity. Some would say silver (and gold) is a Giffen Good—consumption rises as price rises. But this is not correct, as gold isn’t purchased to be consumed, and while some silver is consumed, its consumption did not rise so drastically from the post-COVID low around $15 to yesterday’s price well over $26.

That $11 gain came from the increase in a non-consumption demand.

That is, it’s a monetary reservation demand (plus a speculative demand, but the point remains that silver is behaving now as a financial asset not an industrial ingredient to be consumed).

The question that’s on everybody’s mind: did the price move on August 4 occur with rising scarcity, or rising abundance of silver to the market? 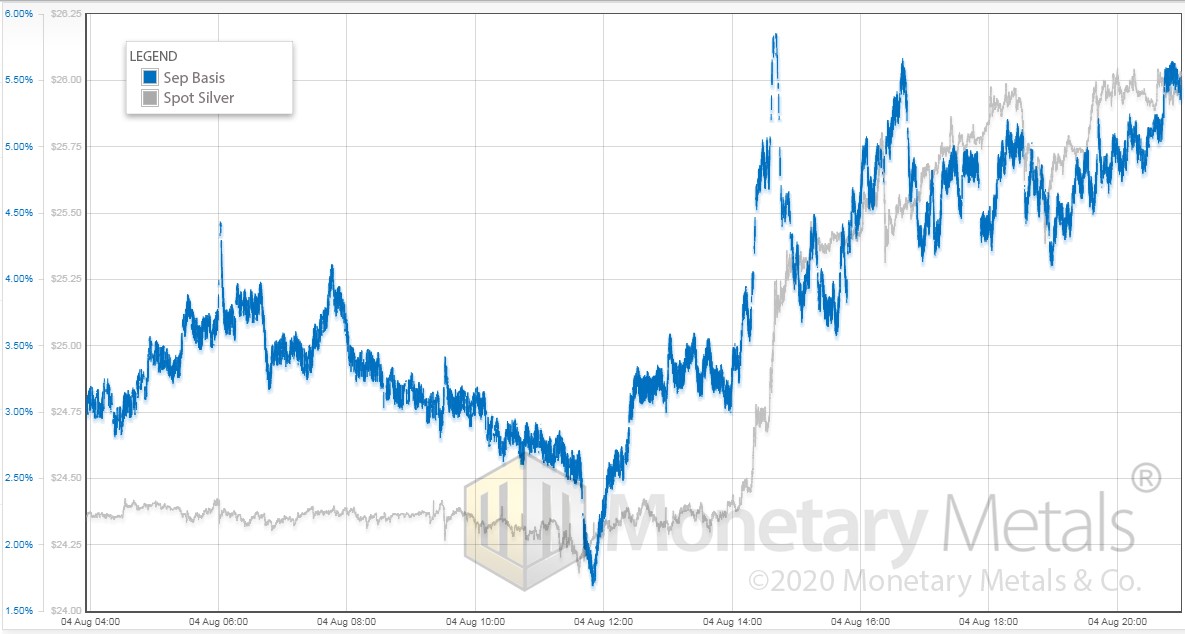 We start the day (London early morning) with the price around $24.35 and the September basis around 3% annualized. To put this in perspective, the profit to carry silver—buy spot and sell September future—was around 10 cents. After rising a bit to 4%, it begins to drop to just over 1.5%. That’s a pretty big increase in scarcity while the price action is going sideways.

And this time—unlike the last few weeks, but very much like the past nine years—there is a close correlation of basis with price. That is, speculators buy futures with leverage, which causes the price to rise (yeah, we know all about the conspiracy theory that paper is sold “naked” to soak up demand, and prevent the price from rising—it’s rubbish, as we explained to Ted Butler in an article that, to this day, he has not responded to).

Speculators push up the price of futures, and arbitrages—yes, even now, there are arbitrageurs—buy spot and sell futures to profit from, and close, the gap. The rising basis, or widening gap between spot and futures, is proof that the move was driven by futures buying. Not physical metal buying.

Does this mean the price won’t go up further? We once described the yield-less world of the central banks’ War on Interest, by noting that people cannot earn interest by financing productive enterprise. Therefore they speculate, and there’s always a good bubble inflating somewhere.

Once momentum takes hold, there’s no telling where the price may go. Perhaps $50. It happened in 2011 (and 1980). It could happen again! Or perhaps it will be cut short long before then. Or it is even possible that the silver fundamentals pick up again, and buying of metal becomes more aggressive even at $26.

Meanwhile, we will keep on publishing graphs and analysis. And paying interest to our clients on their silver (and gold!).