Retail sales growth has slowed down. What does it mean for the U.S. economy and the gold market? Retail sales increased 1.2 percent in July. The growth was worse than expected, which hit the U.S. stock market. As the chart below shows, the number was also much weaker than in the two previous months (8.4 percent gain in June and 18.3 percent jump in May), when it seemed that the economy started to rebound. 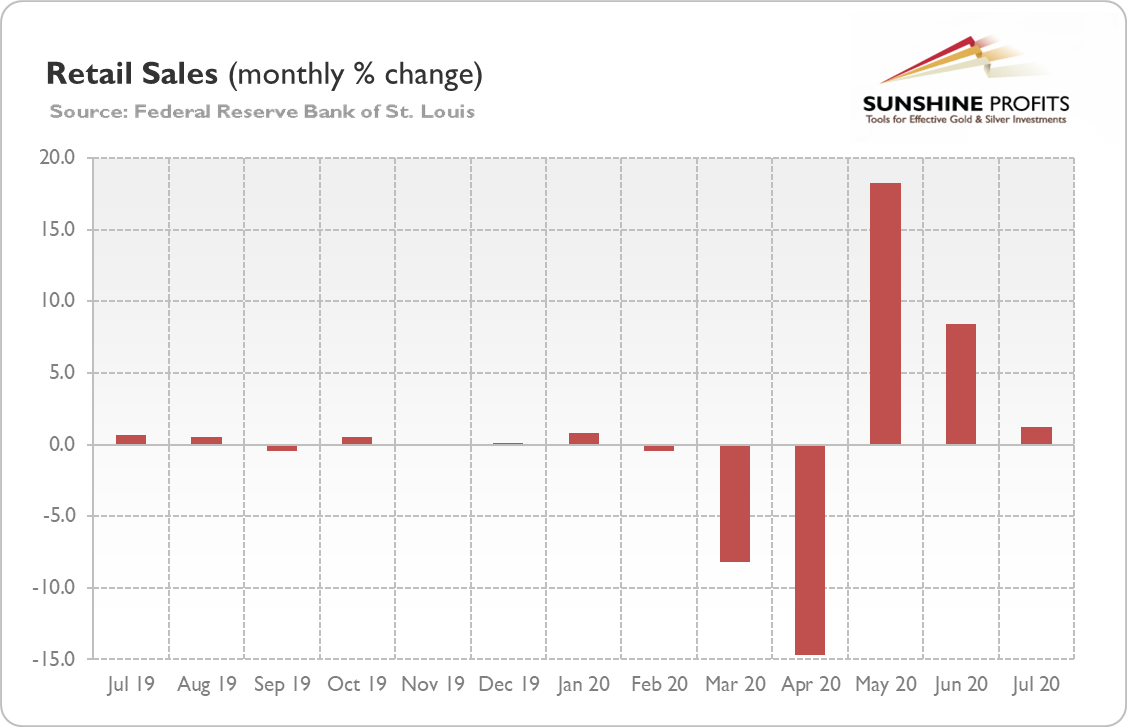 Now, the weak July reading indicates that we have seen a false recovery. Or that it was brutally interrupted by the second wave of the coronavirus infections Given that epidemic is still widespread (it seems that, as John Cochrane put it, “America has essentially given upon containing the corona virus, and will just let it spread while we await a vaccine”), the mediocre July data might be a sign of what is ahead.

In other words, August could be also not the best month for the U.S. economy, as the resurgence of the Covid-19 cases delayed the return of people to their jobs and the overall economy’s return to normal. Importantly, the second wave coincided with the expiration of the $600 federal unemployment benefit, which also hit the real incomes of Americans and their spending power. All this is, of course, great news for the gold market.

And what about other data? Industrial production rose 3 percent in July, more than forecasted. It was the third monthly gain in a row, which is a superb achievement in the current manic-depressive economy, but industrial production remains below the pre-crisis level, as the chart below shows. 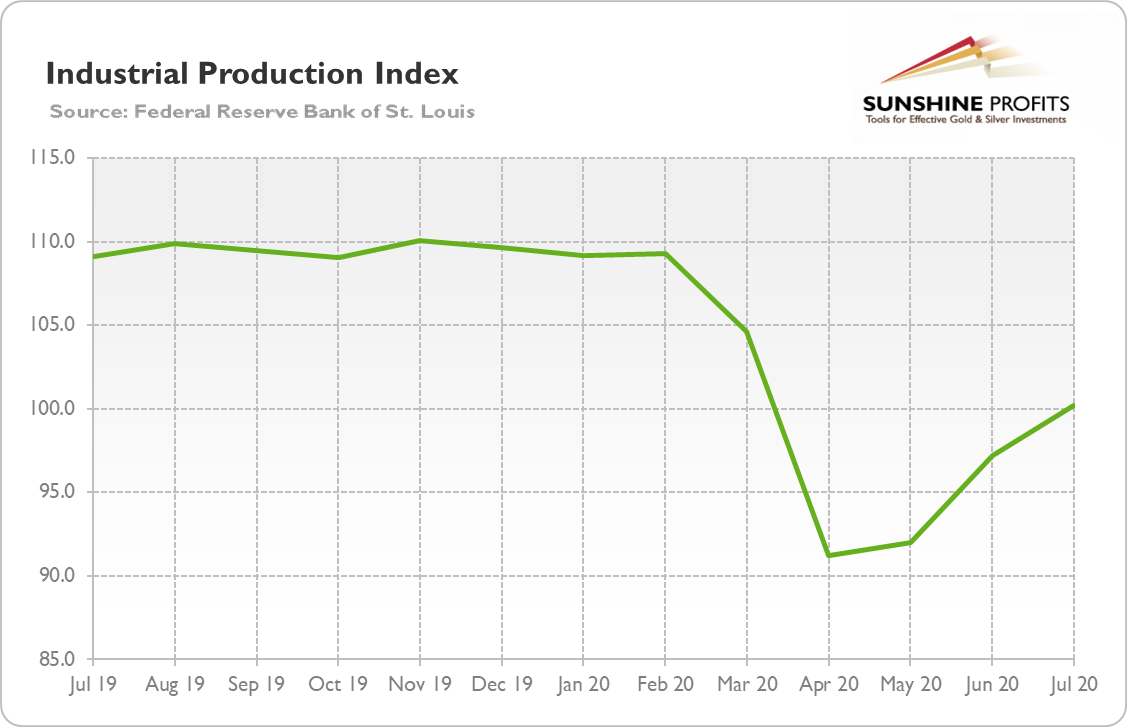 Importantly, senior executives say that not all the jobs lost during the economic crisis are coming back soon. What a surprise! We warned since the very beginning that there will be no V-shaped recovery, especially in the labor market.

Oh, by the way, how is the labor market doing? Well, so-so. There are good signs, that’s for sure. For example, last week, initial jobless claims fell below 1 million for the first time since the coronavirus crisis began, as the chart below shows. However, the drop reflects only partially economic reopening, as it also suggests the expiration of federal supplemental unemployment benefit last month. 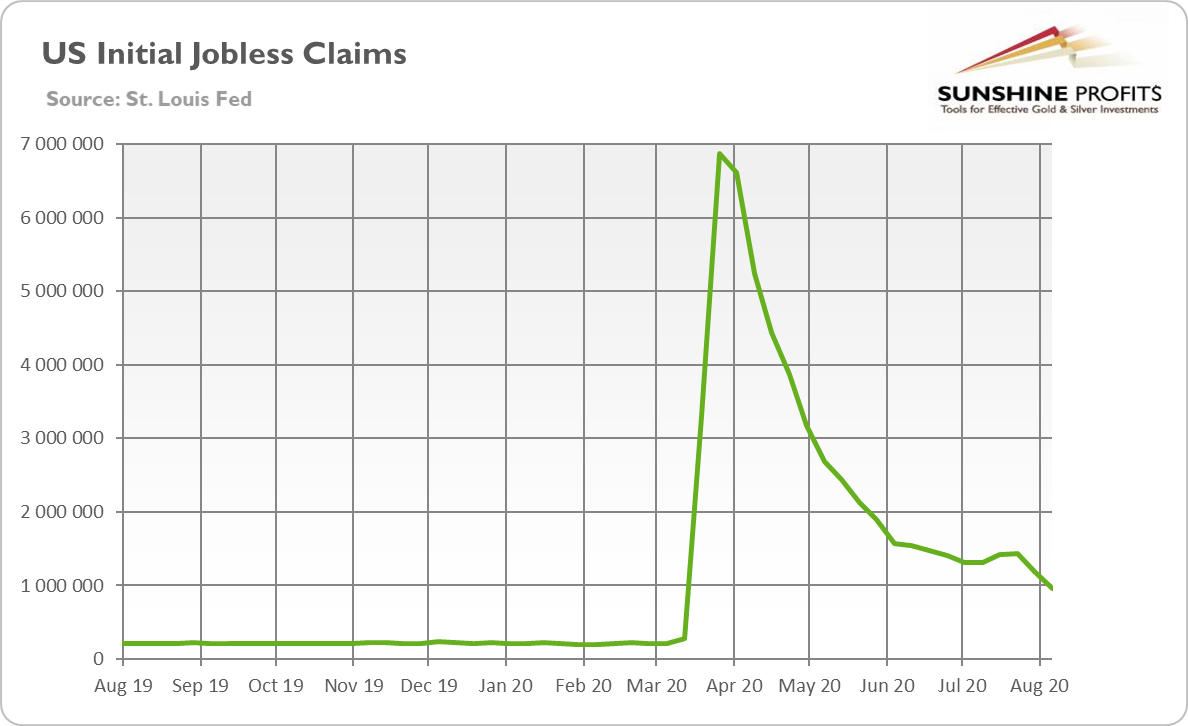 And although the unemployment rate declined in July to 10.2 percent, the pace of the U.S. employment growth has seriously slowed down, as one can see in the chart below. The economy regained 1.76 million jobs, not so many when compared with the revised 4.79 gain in June. And so far, the American economy restored less than half of the lost jobs during the pandemic. 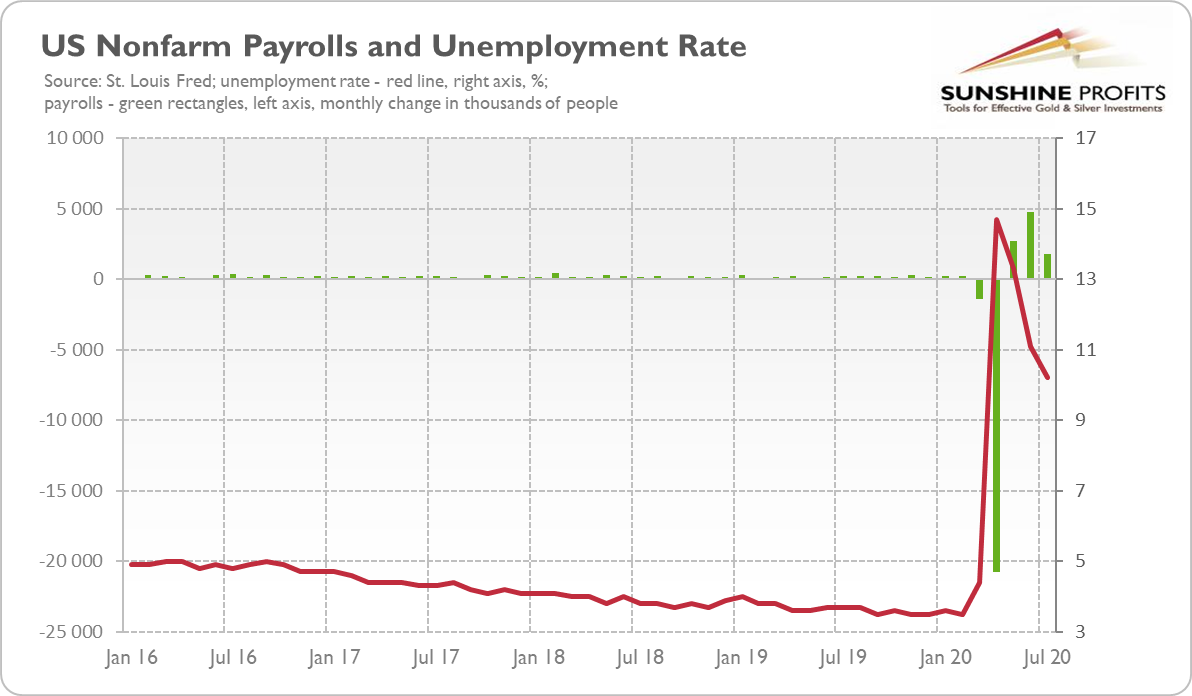 As the health crisis goes on, many of the initially temporary job losses will become permanent, making it harder for the economy to recover. And making gold shine even brighter. What is important is that the U.S. labor market is weaker than the official data suggest, which was admitted recently by Cleveland Fed President Loretta Mester on Wednesday. She said that more than half of the companies in her district is laying off workers and cutting pay in response to the coronavirus crisis.

What does it all mean for the gold market? Well, it’s true that July data is not as bad as it could be, given the resurgence of the Covid-19 cases. It seems that people, although still worried about their health, stopped to panic and instead they get used to the new epidemiological situation (the fact that people learned to wear masks definitely helped here).

However, the recent data indicates that there will be W-shaped rather than V-shaped recovery. Or that the economy will be in the “reopening” phase, rather than the “recovery” phase, as Loretta Mester put it. The labor market and industrial production are well below the pre-pandemic level. The retail sales managed to recover, but its growth has recently slowed down. It suggests that the recovery has been fragile and based to the large extent on the massive liquidity injections and stimulus packages. Now, without any fresh economic aid, we are observing the true condition of the U.S. economy. So, although the standoff among Democrats and Republicans over the size and scope of the next financial aid package could be the “unfortunate development” for the economy, as Chicago Fed President Charles Evans put it, it might be quite fortunate for the gold prices. However, it might be also the case that both the US equities and gold need the next round of liquidity (and fear of inflation and sovereign debt crisis) to rally again.