Skip to content
HomeGold From Bold To Sold To Finding A Foothold
By Mark Mead Baillie – Re-Blogged From Gold Eagle
How are those lazy ole Dog Days of August workin’ out for ya? Ahhh, August. Vacations in full swing, beer and high cholesterol goodies coursing through the body, substitute media anchors, subtle market movements… Uhhh, No. These days, sequestered in our seats, ’tis all business across the board. With no where to go and goof off, life today is focused on money, markets and mayhem. Just ask the precious metals.

Through these first 15 trading days (three weeks) of August, Gold made an All-Time High at 2089, only to drop 10.3% to 1874 three days hence, before bounding back just this past week to 2025 in settling it all out yesterday (Friday) at 1947. Remember those Little League days of berating the opposing team’s hurler? “Pitcher’s up, pitcher’s down, pitcher’s in a girl’s nightgown!” Even nicking the nightie, that’s Gold these days: off the wall, off the foul pole, even getting caught off base, (you stopped-out Short, you: “Yer outta the game, Bud!”)

And not to be left out of the mix, with Q2 Earnings Season having just concluded as the worst one since 2009’s Q2, the S&P 500 finished out the week yesterday at an all-time closing high of 3397. It’s “live” price/earnings ratio as honestly calculated with earnings “actually earned” by this formula… 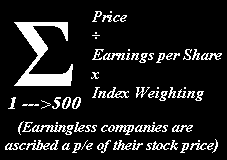 … is 57.9x. Share that with your investment guru. “Well, obviously earnings are gonna triple next year without the market going any higher.” And yet the moneyflow into the S&P is as strong as we’ve ever recorded. More on that later.

Recall the title of last week’s missive “Dare Thee Short Gold? No!” Au contraire, you’d have a gain of six li’l ole points given ’twas Gold’s net loss from a week ago. But be honest, as aforementioned you’d have been “stopped out” en route in the volatility, (unless your trading account is of comparable size to that of various sovereigns, royals, and potentates of various states). Indeed for the fourth consecutive week, Gold’s trading range exceeded 100 points, in turn increasing our “expected weekly trading range” to now 85 points. Thus in turning to Gold’s weekly bars, with price at 1947 and the level at which the parabolic Long trend would flip to Short in the ensuing week at 1910, Gold needs to find a foothold fast, else face being sold: 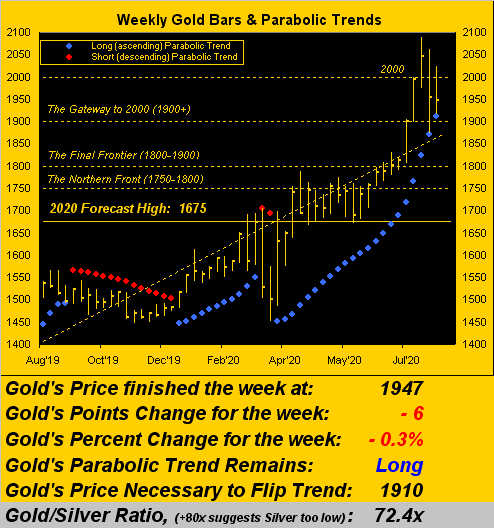 So again, short Gold if you dare, but ’tis rather the opportunity to buy for which we’ll stay aware. Upon the weekly parabolic trend flipping to Short, be it this coming week or the next, the broader watchword for Gold remains UP such that any Short trend ought be short-lived. And as you can see in the above graphic, the prior Short trend recorded all but two red dots. Structural supports for Gold? 1830, 1789, 1776. Good footholds to know, should they show.

And in a show of strength which some thought could never happen, from the depths of the Covid-effected darkness has re-sprung the Economic Barometer. ‘Twas however a rather muted week of incoming data, three of the eight metrics being net negatives as the August readings for both the New York State Empire Index and Philly Fed Index declined, whilst weekly first-time Jobless Claims climbed back above the one million mark. But how about that housing? August’s National Association of Home Builders Index rose on the heels of July’s Housing Starts being +23%, Building Permits +19% and Existing Home Sales +25%. They’re both buyin’ and buildin’ ’em out there in the homeland! Here’s the Baro: 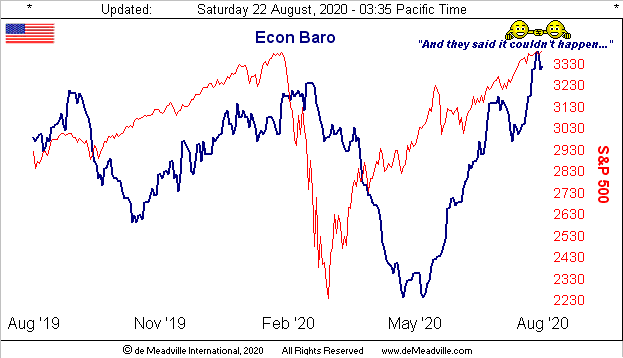 Now in spite of the Econ Baro’s amazing recovery, Reuters wrote just a week back that the “U.S. Hits Fiscal Cliff with Jobs, Economic Recovery in the Balance” Seems like that once-venerable media mogul has morphed from reporting the “news” to the “olds”. Elsewhere however, ’tis said the economic recovery in the EuroZone is running out of puff, the European Central Bank notably concerned over a pickup in unemployment. Moving eastward, Japan’s Gross Domestic Product shrunk some 7.8% in Q2 (-27.8% annualized), the nation’s worst reversion since commencing to use GDP to measure growth (or lack thereof) since 1955. Credit deflation and the recent 20% sales tax increase there in the land of the slipping sun. 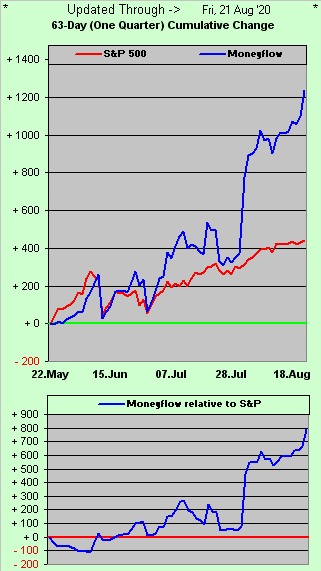 As we said, Squire, staggeringly so. But given its already truly gargantuan “live” p/e, an S&P at that revised 4190 level would put the p/e at an even more stratospheric level of 71.4x. At some point something must give and it ought well be stock prices — even on the back of the strong monetary inflow — should debt yield continue its upward creep. To wit, the yield on the 10-Year U.S. Treasury Note during August has crept up from 0.536% to now 0.640%. ‘Course, that still pales in comparison to the S&P’s present — but indeed declining — “live” yield of 1.679%. (Tick tick tick…)

Meanwhile ticking along to the downside are Gold’s “Baby Blues” of regression trend consistency, suggestive of still lower levels near-term. But as has been our premise of late, ‘twould feel somewhat squeamish to be Short, the broad technical trend being UP and the broad fundamental valuation of Gold right now being (per the opening scoreboard) 3550. Nonetheless, below on the left are Gold’s daily bars across the past three months, whilst on the right is the 10-day Market Profile, with a more clearly defined array of trading apices. And the Big Hold area for Gold right now is right here at 1946; otherwise ’tis “Hello Parabolic Short Trend” and we’d think a test of the first-mentioned foothold at 1830: true, that’s 117 points below the present 1947 price, but again, Gold is sporting weekly trading ranges bettering 100 points. Here’s the graphic: 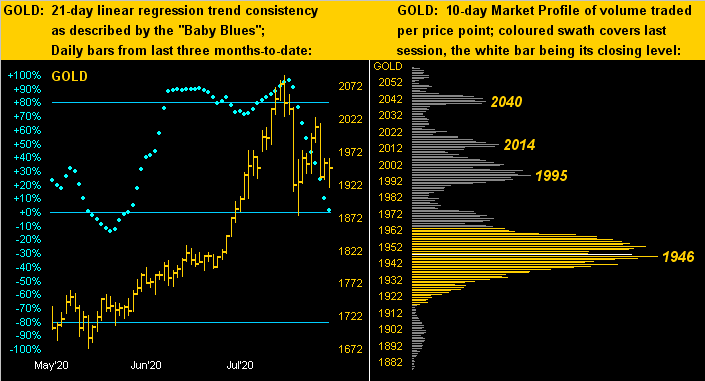 As noted a week ago, the similar analyses for Silver appear a bit firmer, her daily bars and “Baby Blues” below left and Profile below right. The Silver story of late has been her catching up to Gold such that their ratio — after having unconscionably been above 100x — has neared the average from 2001 of 66.0x, the current reading being 72.4x. Nice comeback Sister Silver! And yet for the white metal, per the Chicago Transit Authority’s lyric from back in ’69, ’tis “Only the beginning, Only just the start…”: 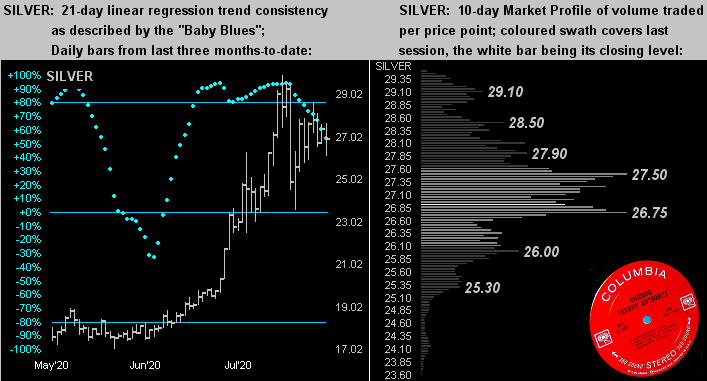 Ahead of a busier week for incoming economic data, we’ll close it out here with this remembrance:

We read this past week of British Airways (as have other carriers) beginning to retire its 31 iconic Boeing 747 “jumbo jets”. What a plane, eh? Do you remember the first time you boarded one and seeing that spiral staircase leading to the elite upstairs section? “There’s an upstairs on a plane?” Incredible! ‘Course Airbus decades later came along with its model 380, the upstairs there so quiet you can hear a pin drop. But alas, it too is on the outs, Air France having finished those flights. Why operate a 380 at some $24k/hour when the “triple-seven” goes at around $15k/hour. Hate to see ’em both go, but as a great friend of The Gold Update tells us on occasion, “You’re an incurable romantic.”