Skip to content
HomeWelcome To THE GLOBAL GULAG Part 2

[This is a little more Alarmist than the usual article I post, but it provides a very different perspective on current events.  –Bob]

The year 2020 will surely go down in the annals of history as one of the worst of all time, although the seeding event, the virus, occurred late in 2019. It is hard to comprehend the magnitude of the devastation that has been inflicted this year, all in pursuit of the objective of absolute power by a narrow clique of plutocrats.

The global economy, already teetering on the brink due to extremes of debt, has been severely impacted by their gigantic wrecking ball, with countless thousands of businesses destroyed or on the brink of failure, countless millions made unemployed, whole industries leveled, including the airlines, the catering industry, the event and hospitality industry, travel and tourism and restaurants, but even worse has been the damage inflicted on the social fabric.

The global population has been duped by the contrived virus hoax into accepting draconian house imprisonment, abandoning normal social interaction and even into accepting wearing masks everywhere they go, whose subliminal message is “Shut up and do as you are told, or else.” This is all part of a comprehensive plan to atomize society so that people are as isolated, vulnerable and afraid as possible, which makes them much more susceptible to being controlled and manipulated into doing things like accepting being vaccinated.

Think about the countless millions or rather billions of things that should have happened this year that haven’t, the meetings of friends, meals in cafes and restaurants, visits to art galleries concerts and museums, vacations, the countless billions of photos not taken, children missing school and their school friends, lovers split apart etc. etc. Society has been impoverished on an unprecedented scale and for what? – a massive lie promulgated by a narrow group of evil men who control most of the media and the medical profession. 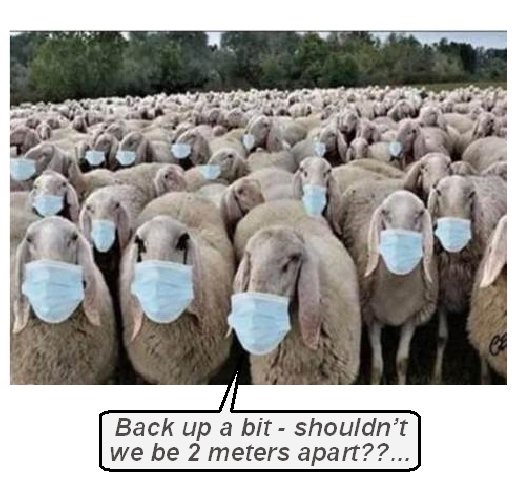 There is an old but true saying that in order for evil to triumph, all that is necessary is for good men to do nothing (or little) – and good men have done a lot of nothing for years now, decades even. They have been too busy taking their ease and enjoying life. Evil on the other hand is tireless, it never gives up in its search for an opening and once it gains a foothold it grows and spreads like a cancer. Its goals are to dominate and exploit to the maximum extent possible and for recreation it likes to inflict pain and suffering on those over which it exercises dominion. The forces of evil scored a major victory way back in 1913 with the creation of the Federal Reserve which has been working relentlessly ever since, parasitizing and undermining the American people and the American economy, and latterly the entire world, with a major milestone being the elimination of sound money in 1971 when Nixon took the dollar off the gold standard. The result of all this is the mess and mayhem that you see all around you now with the world going into economic freefall due to the extremes of debt created as a result of unrestrained fiat creation and the impact of the Covid-10 hoax.

The data is in – the deaths due to the virus, even taking the grossly exaggerated figures produced at face value, are little more than would result from a typical flu season. This therefore means that the scare tactics employed in an effort to justify cruel and destructive lockdowns, mask wearing, “social distancing” and economic sabotage that were set in train some months back were wholly unjustified. So the logical conclusion is that these measures were imposed by those in power, hereafter referred to as the New World Order, or NWO for short, in pursuit of some agenda or agendas. Now, with the virus story losing credibility, they are working assiduously to ramp up the cases and fiddle the stats in order to try to justify their “Dark Winter” involving more widespread lockdowns and economic devastation, the better to coerce the exhausted and bewildered population into submitted to being vaccinated, which for the NWO is “the promised land” of total control of the slaves. Already, in Britain, we are seeing the same sort of alarming projections that we saw back in the Spring, which are based on rigged data produced by ramping up bogus tests, whose purpose is to justify renewed severe restrictions that are already starting there. We can expect this to happen in many other places.

As stated in Part 1, a big reason that the virus was released when it was is that the massive debt bubble inflated economy had reached its ultimate limits and was on verge of imploding late last year, with evidence of this being the Fed’s emergency intervention in the repo market. If the economy was about to implode then the NWO needed a scapegoat, they didn’t want to take the blame for it – enter the virus. 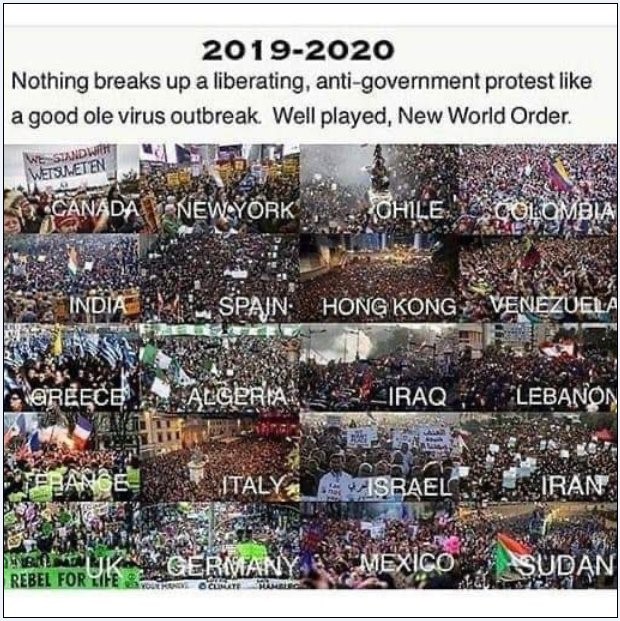 If they were like this last year, it doesn’t take much imagination to figure out what they would be like when the economy implodes and many of them are left jobless and destitute, as is happening now, and then their meager State handouts are ravaged by rampant inflation. The NWO needed to do something drastic to head off a global revolt, hence what we have seen unfold since late last year.

NOW UNDERSTAND THIS – the reasons for the lockdowns and the absurd and bizarre “social distancing” measures and mask wearing edicts are very easy to understand. The NWO wanted to stop people communicating with each other and gathering in groups. They didn’t want those who understand what this is really all about communicating with the much greater number who don’t. After all, they might become angry and rebellious when they realize that they “have been led up the garden path” and start gathering together in larger and larger numbers until they form mobs of sufficient magnitude to storm the citadels of power and turf out the despots imposing tyranny on them. Thus the lockdowns and social distancing and mask wearing are all about keeping people isolated, uninformed and weak. Unfortunately most people are so ill informed that they go along with this nonsense and have stopped seeing friends and even close family members, with the highly destructive consequence of a breakdown in normal social cohesion.

A crucial point to understand is that the global economy was due to implode anyway as mentioned above, due to debt levels rising to unsustainable extremes, virus or no virus. Egon Von Greyerz has warned of this for years, and of course he was largely ignored. What has happened is that the NWO have taken the initiative and taken firm control of the situation using the virus scam as cover and as a catalyst to speed up the process of collapse, the better to roll out their global neo-marxist totalitarian regime, which will be a kind of high-Tech version of Stalin’s communist Russia, with already established FEMA camps in the US, whose gates will soon swing open in welcome, being a modern version of the Gulag Archipelago. With the debt bubble set to implode, virus or no virus, we were destined to plunge into chaos and anarchy anyway, so what the NWO have decided to do is to take charge of the collapse, using the old adage “Never let a good crisis go to waste” and steer the world in the direction they want it to go, whilst at the same time taking robust measures to prevent revolution by isolating people. This is why the upcoming elites gathering in Davos which has been postponed from January will be called Reset 2021 or something similar.

So what are the goals and agendas of the NWO? Put simply they are to create a two-tier neo-feudal society, which already exists to a large extent, with a fabulously wealthy ruling class who exercise absolute dictatorial powers over everybody else, who exist, if they are permitted to, as an effective slave labor force. They will determine every aspect of your existence – what you can and can’t do, where you can go, and whether you live or die, and using the latest technological developments such as 5G, that will apply inside your own home and vehicle if you have one too, so that privacy will cease to exist. This is what is driving their determination to get everyone vaccinated.

Right now an unrestrained psychological warfare campaign is being waged by the NWO against humanity. All the measures employed to both isolate and weaken people mentally and physically, which include curfews, lockdowns, mask wearing and social distancing are direct violations of the most basic human rights and the only reason that they have gotten away with it so far is that the majority of people have been hoodwinked by the mainstream media who are owned and controlled by the NWO into believing all the hyped up nonsense about the virus and anyway the majority are too weak-willed to resist, whether they know what is going on or not.

To assist the citizenry in adjusting to their new reality, the massive propaganda department of the NWO have come up with the following laughable expressions, that are only accepted because the majority of the population are so ignorant, naïve and stupid…

This is only a basic list of the numerous new expressions brought into use by the Scamdemic, since most of them are irrelevant to what we are focusing on here.

One of the core reasons for grinding people down through the application of these draconian measures is to make them increasingly isolated, fearful and vulnerable, and more prone to sickness – and thus prepared to yield to having the vaccine, which is being sold as a passport back to a relatively normal life. You won’t be forced to have the vaccine, initially at least, you will be coerced because without proof of vaccination you will be largely excluded from society and unable to do many everyday things. What many of the ignorant masses lining up to receive their shot won’t realize of course is that far from being a “passport to a normal life” vaccination will be a gateway to a dystopian hell. They think that it will protect them from Covid-19 and the flu, but there is far more to it than that. It will be DNA altering and the vaccine will contain subcutaneous elements that can be scanned to instantly reveal your identity, and thus it will mean that those who receive it will in effect be branded or tattooed.