The Fed assured us interest rates will stay low for years and they’ll continue QE4ever – printing dollars from nothing.

Rioters are doing their thing in many cities. Some are paid to riot and destroy. Is this a healthy sign?

The Presidential race is interesting. Both candidates make promises and collect donations, as usual.

If Trump wins, debt will accelerate higher, government spending will rise, and gold prices will increase.

If Biden wins, debt will accelerate higher, government spending will rise, and gold prices will increase.

BUT WHAT ABOUT GOLD AND SILVER?

Option Two – Bull Case:  Gold entered a long-term bull market after its low in December 2015. The current pullback is a healthy correction for gold’s ride higher from $1,182 in September 2018. The bull market will continue.

Option Three – Delusional Case: Gold prices will fall toward $1,000 as congress and the administration announce they will balance the budget, the Fed apologizes for creating a disaster in global economies, Democrats and Republicans make nice, and most rioters find jobs in California. Hot-button issues such as COVID-19, global warming, racism, and unemployment are solved, and CNN encourages a joint session of congress where all members sing Kumbaya and hold hands.

Option One Bear – prices fall for years. What SUPPORTS that option? 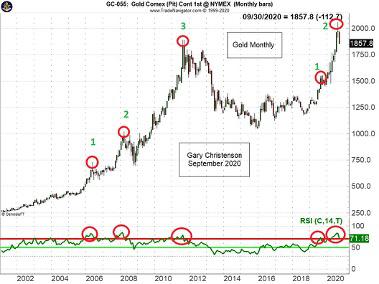 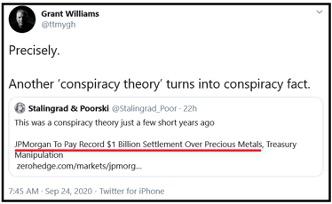 Option One Bear – prices fall for years. What argues AGAINST that option?

Option Two Bull – prices will rise for several more years. What argues IN FAVOR OF that option? 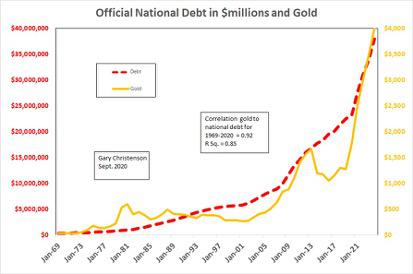 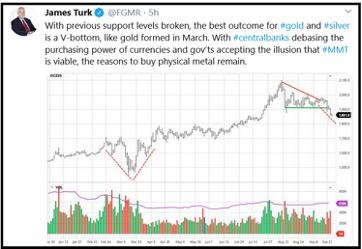 Option Two Bull – prices will rise for several more years. What argues AGAINST that option?

Gold prices hit an all-time high in August 2020. The other times (1980 and 2011) gold fell for years thereafter. (Doubtful gold prices will fall much, but it could happen.)

The Fed wants higher stock prices, inflation, lower gold prices and more power. Don’t bet against the Fed. (However, markets, fear, and greed are larger than the Fed.)

A runaway gold price suggests the Fed and U.S. government are mismanaging the dollar. They want stable or falling gold prices. Sometimes governments can’t get what they want because other priorities are more important. Some important priorities are: re-election, buying votes, loss of confidence in the dollar, low interest rates, escalating wars, bipartisan stupidity, payoffs for businesses and unions, expanded social welfare programs, the MMT monster rising from the swamp, and another pandemic lockdown.

One can argue that gold and silver prices should fall for years and bottom much lower. These arguments make little sense and defy history.

One can argue that gold and silver prices are correcting, the sky is NOT falling for gold and silver investors, and much higher prices lie ahead as the dollar is devalued further. I believe this scenario.

If your perspective is focused upon the next week or two, gold and silver prices look weak and could go lower.

If your perspective is focused upon 2021 – 2024, gold prices are correcting on their way to much higher prices.

In the short-term, gold and silver prices could fall further. In the long-term, they are going higher.

“There is hardly an economist today who does not condemn the Reichsbank for its inflationary policies. Yet they are supportive of similar monetary policies by the Fed, the European Central Bank, the Bank of Japan and the Bank of England.”

“The final collapse of a currency is always a flight out of government fiat currency into goods. That can be the only outcome from the continuation of current macroeconomic policies. But above all, it would be a mistake to think it cannot happen, nor that it will be a long process giving us all plenty of time to plan. The final flight out of paper marks took approximately six months.”

WHEN WILL GOLD PRICES BOTTOM?

Cycle analysis can provide insights, or as others suggest, wishful thinking. Take these cycle thoughts for whatever they are worth.

The last ten significant bottoms (green ovals) in gold prices, over the past 15 years, have occurred near bottoms in the 52-week (blue) and/or 80-week (red) cycles. Cycles guarantee nothing, but the 52-week cycle is due to bottom about December 2020 and the 80 week is due to bottom in October 2021. Shorter cycles suggest a bottom this October. 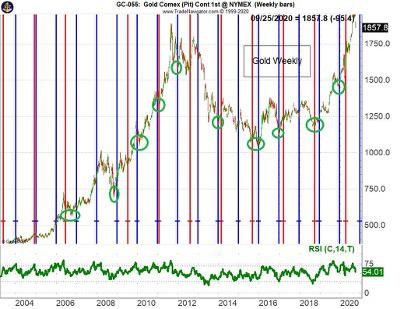 Prices could bottom in October, rise for several months, fall to another short-term low in December, and rise for most of 2021, with a correction low around October 2021. Or maybe not…

Another gold cycle chart to consider: 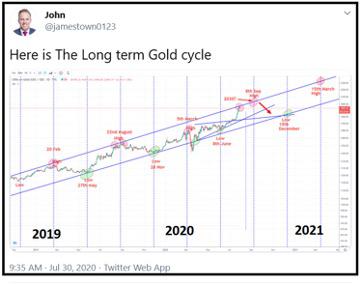 The daily gold RSI is already over-sold, so a bottom could occur any time.