I mentioned in a recent article that the weird thing about this recession is that it is the only one in which personal income has gone up during a recession. That, of course, is because of government assistance, which is making it so we don’t have to feel the pain of a recession that the government, itself, caused — through its massive debt, tax breaks for the 1%, reliance on the Fed to solve government’s problems, and most currently through its forced economic shutdown as a response to COVID-19 — something that even the WHO now says was failed policy that should never have happened — even though they helped make sure it did happen!

All of that is weird stuff, but another really weird thing about this recession is that the housing market took off as though we had just entered the best of times this summer. Who would have guessed: 32-million people out of work, and we have a housing market melt-up? Of all the unlikely times for a new bubble to form! I didn’t read anyone who saw that coming. Neither did I see it coming, but it added brilliance to the summer that has continued burning all the way into October.

If you are looking to buy a house, as many are, that silver ray has a dark lining because it is driving up your cost, making it harder for you to enter the market. We are seeing rampant inflation in housing prices outside of major cities. The housing market is exploding into a new balloon (far too big to call a bubble) because there is severe shortage in available housing right as demand soared and interest hit an all-time low.

Oh, there is plenty of housing supply opening up in the major cities because no one wants to live there anymore. Urbanites now want to migrate to the country or to smaller towns to escape riots and COVID concentration camps. COVID created a sudden reversal (perhaps just temporarILy) of a migration pattern from country to city that had endured for decades.

Of course, what makes “the country” the country is the lack of housing. Likewise with what makes small towns small. That means the desired new homes have to be built from scratch. So, we’re in a rush to fill in those beautiful fields and forests with new housing developments, turning them into rapidly expanding suburbs under that bizarrely outmoded idea that you can actually move swarms of people into the country and still have it be country.

Californians in particular are doing what they always do in times like this — rushing to transform small towns outside of California into expensive larger towns that run like Californians know towns ought to run (so they can do it all again fifty years from now when they, again, flee what they recreated). Once there, they will establish the same liberal polices of teaching racial hatred and police hatred by endlessly reminding everyone of why they should hate each other along with encouragement of riots as a form of free speech that have turned their cities into war zones, forever oblivious to the fact that hatred is what it is partly because they do all they can to enable riots while throwing fuel on smoldering animosities.

This huge migration shift has driven prices up as much as 5% per month and the cost of building materials in some areas up as much as 300% over the course of just a couple of months, particularly lumber, now that California is burning down all of its forests (due to years in which environmentalists saw to it that open slash burns were no longer allowed in national forests — or any kind of forest — so we left lots of debris on the floor to become tinder because burning slash in piles does not accomplish the same cleansing and due to reducing logging).

In some places builders and/or construction workers are in short supply. All of that is good for the economy as housing has more power to drive an economy and create new jobs than just about anything.

With too few houses in the country (because it is country), we are even back to bidding wars over existing homes in some rural areas and smaller towns, all enabled by record low mortgage interest that the Fed has established.

A housing collapse within the building spree

Oddly, while June and July saw a record rebound in new housing starts, August saw somewhat of a collapse: 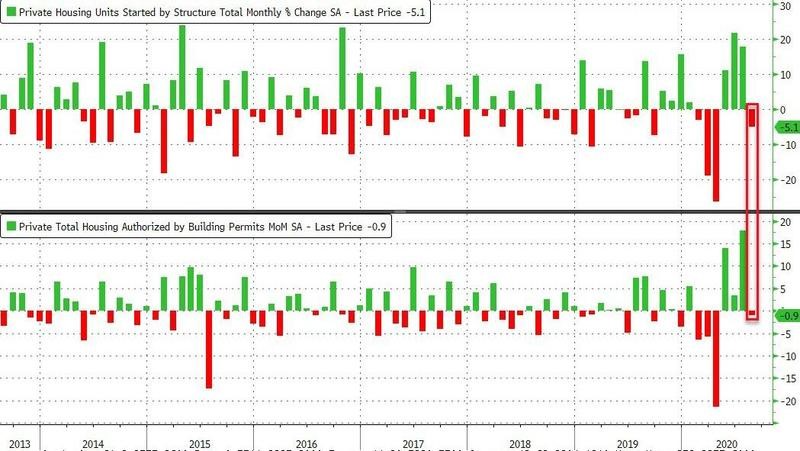 While that seems weird on the face of things, given how enthusiastic builders are feeling right now and how prices are soaring, the explanation for it is fairly straightforward:

Another oddity is that, in spite of the barrage of news about rabid demand and bidding wars starting back up in housing, it would appear from September sentiment gauges that maybe builders (and realtors) were more excited about it than actual buyers: 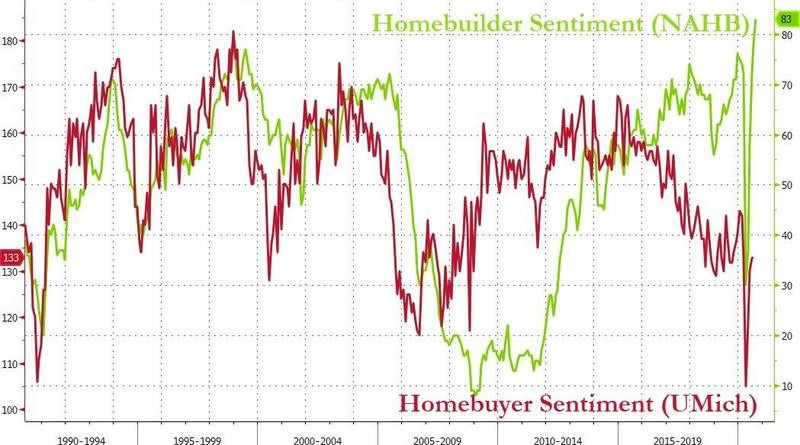 Buyer sentiment may be falling because prices are rising so fast, and inventory is so low, putting the desired homes out of reach for many. (That is a guess. I don’t really know quite how to square that circle because falling sentiment would not seem to drive rising sales and rising prices.) Both the drop in sentiment and the drop in multi-family housing could also be indicative that the market is already starting to turn and will turn when I first said it would.

I have maintained since the start fo the Coronacrisis that we will not see a decline in housing prices until November. Before all the government intervention, I did expect a decline to start around November. However, with the forbearance laws that went in place and all the government rescue packages that are increasing most unemployed people’s income during this recession, it’s possible a drop in prices will not come at all. That depends on whether stimulus fails to get approval and whether forbearance laws are renewed.

If the government support subsides, everything, including the housing market, will collapse rapidly over the late fall and winter. If the economy degenerates as quickly as I believe it will during the fall and winter, even additional stimulus still may not be enough to keep the housing balloon floating.

I found it easy to predict a housing bubble collapse in 2007 for 2008. Whether the market will collapse soon this time around is really hard to predict because of the scale of competing forces and efforts to prevent such a thing already I play — job losses v. greater income for the unemployed, housing prices rising v. interest falling, rising numbers of homes technically in default v. forbearance preventing legal default, stimulus likely to increase after the election v. the likely civil wars that will break out after the election if the results are close enough to be contestable, fueling even greater desire to get out of the urban battlegrounds.

Commercial real estate is another matter entirely and is easily predictable

There is no question where the commercial monster is headed for the next few years. In war-torn NYC, commercial real-estate sales plummeted 54% citywide to the lowest since 2015 when records began. Not surprisingly,

Apartment buildings suffered the biggest drops in prices, at 50% on average. Offices and hotels saw decreases of 28% and 37%, respectively, while prices for retail properties were flat.

And why wouldn’t hotels crash like an elevator? Even the famous Hilton of Times Square announced in September it will close its doors on a “permanent” basis. “Two-Thirds Of US Hotels Say They Won’t Last Six More Month At Current Occupancy Levels.”

Malls were struggling all over the nation for a couple of years under the Retail Apocalypse I’ve been covering, and COVID has kicked mall owners in the groin; so, mall closures are speeding up everywhere. Offices are not needed as much due to people working remotely. Forbearance was making things worse for mall and office high-rise owners by making it impossible for landlords to evict commercial tenants, though the tenants certainly needed that grace. At some point all of this collapses into a heap of rubble.

As Zero Hedge just noted, malls die slowly until they die quickly. The same can be said of shopping centers and probably of office buildings that have fallen out of demand. They close store by store or office by office until they get below a certain critical mass, where they are no longer feasible with no hope in site because their problems are mostly not of their own creating right now, so then they just close entirely.

When will the house of cards fall?

There is plenty that can bring this whole real-estate structure down in a hurry, especially now that we are in a housing market melt-up that can only find comparison in the year 2007, BUT it all depends on how long it takes before the government can’t find the political will for continued stimulus or can’t take on additional debt at the speed of light without damaging its credit rating or ends forbearance measures because they are killing landlords or killing banks.

Commercial real estate is already falling and is in such a world of hurt that it has zero chance of getting better anytime soon. The same thing is happening in nations all over the world of course because many nations already had badly flawed economies before the Covidcrisis hit and had banks that were already seeing lower results for higher stimulus efforts.

The foundation for the housing market structure in the US is precarious with plenty of explosives already attached to the support columns, but something is going to have to detonate it to cause it to collapse into its own basement. Until then, housing prices may keep on soaring right into the recession … but probably not out the other side.