It can’t come as any surprise that the stock market’s lofty balloon ride during the past couple of months fell because of a few words this week. It only rode up on sweet tweets by Trump about trade, which created a thermocline for it to ride. So, of course, the market plummeted this week in the unexpected downdraft of Trump’s out-of-the-blue statement that his trade deal may be a year away … even for phase one.

I don’t know if ignorant traders drive these vain accessions and declensions or just ignorant machines that have no ability to discern truth, so blindly they take all presidential headlines at face value.

Who could be surprised that stocks got off to their worst December start since the beginning of the Great Recession when Trump said a trade deal might best be shelved until after the 2020 elections? It was, however, apparently a fleeting horror to those who had actually believed Trump about a phase-one deal being imminent this month. One could only watch the surprised reactions with amusement, given there was no reason there should have been any surprise at all.

END_OF_DOCUMENT_TOKEN_TO_BE_REPLACED

By USAGOLD – Re-Blogged From Gold Eagle

Five charts to contemplate as we prepare for the New Year 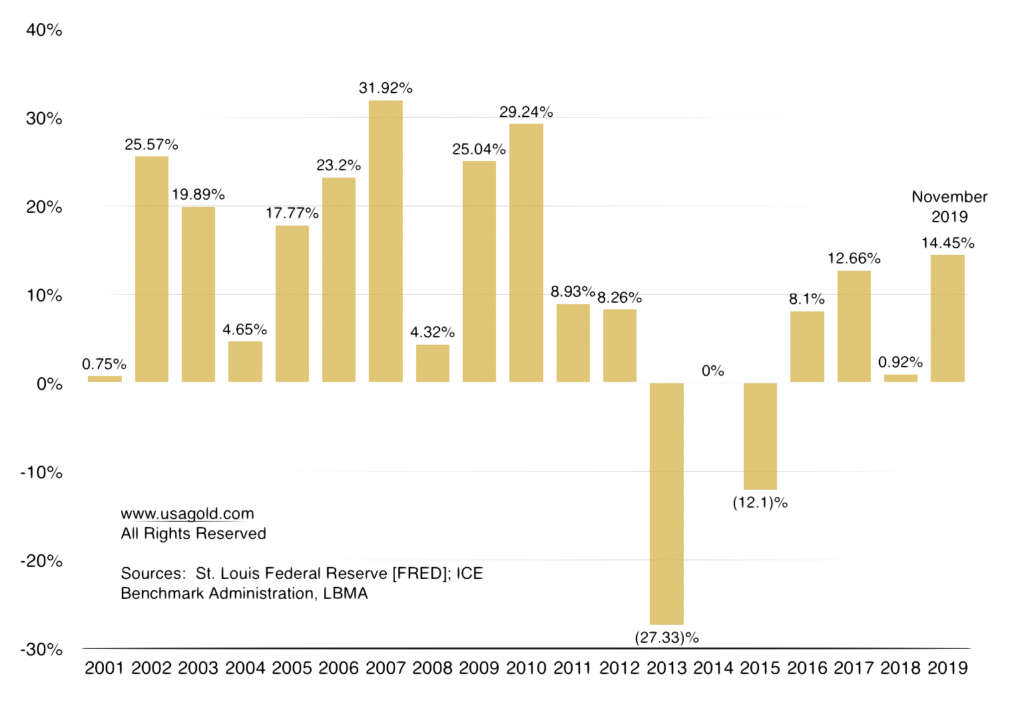 In the February edition of this newsletter, we ran an article under the headline:  Will 2019 be the year of the big breakout for gold? Though we would not characterize gold’s move to the upside so far this year as ‘the big breakout,’ 2019 has been the best year for gold since 2010 even with the recent correction taken into account.  Back in September when the price gold reached $1550 per ounce – up almost 22% on the year – 2019 was looking more like a breakout year. Now with the move back to the $1460 level, the market mood has become more restrained. As it is, gold is up 15 of the last 19 years and still up 14.45% so far this year.

END_OF_DOCUMENT_TOKEN_TO_BE_REPLACED 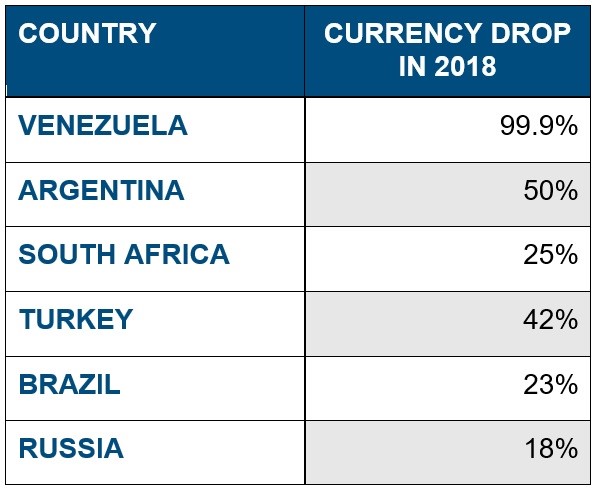 The currency is often the best indication of a country’s economic health. Just look at these six currencies submerging into obscurity:

END_OF_DOCUMENT_TOKEN_TO_BE_REPLACED

Tommy Samson is explaining why he’s been forced to scale back business amid Argentina’s financial-market rout. His Buenos Aires firm imports surgical equipment such as sutures for stitching wounds, paying in foreign currency. Then he sells them to local customers in pesos.

The last link in that chain is breaking down — because Argentina’s currency is in freefall. It’s lost half its value this year, and some 20 percent this week alone. The slump threatens to spread havoc through the $640 billion economy, rupturing supply chains for businesses and straining the finances of households.

And it’s casting a shadow over President Mauricio Macri’s prospects of winning re-election next year. Even Argentina’s most market-friendly leader in more than a decade has struggled to restore investor confidence.

“There’s no clear price reference after the peso plunge.”

END_OF_DOCUMENT_TOKEN_TO_BE_REPLACED

China may have to start buying U.S. soybeans again in coming weeks despite the trade war between the two countries as other regions cannot supply enough soybeans to meet China’s needs, Hamburg-based oilseeds analysts Oil World said on Tuesday.

In July, China imposed import tariffs on a list of U.S. goods, including soybeans, as part of the trade dispute with the United States. China is the world’s largest soybean importer and has been seeking alternative supplies, especially in South America, where supplies available for export are down.

END_OF_DOCUMENT_TOKEN_TO_BE_REPLACED

China Remains in the U.S. Crosshairs. The United States will impose tariffs, sanctions and blocks on investment and research in a bid to frustrate China’s development of strategic technologies. China not only has the tools to manage the economic blow, but will also accelerate efforts to lessen its reliance on foreign-sourced technological components.

Trade Battles Fall Short of a Full-Fledged War. Trade frictions will remain high this quarter as the White House continues on an economic warpath in the name of national security. U.S. tariffs will invite countermeasures from trading partners targeting U.S. agricultural and industrial goods. As Congress attempts to reclaim trade authority, the White House will refrain from escalating these trade battles into an all-out trade war.