Ever since the introduction of the Food Pyramid in the early ’90s, the average American has gotten fatter and sicker. Has this government-approved nutritional guideline — the basis of the modern “healthy diet” — led us astray? If so, how did this happen, and what can we learn from it? Cardiologist Dr. Bret Scher offers some food for thought on this very weighty issue.

By Christopher Monckton of Brenchley – Re-Blogged From WUWT

At Harvard, there was once a University. Now that once noble campus has become a luxury asylum for the terminally feeble-minded. Walter Willett, one of the inmates (in his sadly incurable delusion he calls himself “Professor of Nutrition”), has gibbered to a well-meaning visitor from Business Insider that “eating a diet that’s especially high in red meat will be undermining the sustainability of the climate.”

Farewell, then, to the Roast Beef of Old England. So keen are we in the Old Country on our Sunday roast (cooked rare and sliced thickish) that the French call us les rosbifs. But the “Professor” (for we must humor him by letting him think he is qualified to talk about nutrition) wants to put a stop to all that.

END_OF_DOCUMENT_TOKEN_TO_BE_REPLACED

By Sarah Hallberg – Re-Blogged From The Hill

America is facing a chronic disease crisis. The federal government is fueling that crisis by promoting flawed nutritional advice that contradicts the latest research.

Every five years, the Departments of Agriculture and Health and Human Services publish the “Dietary Guidelines for Americans,” which detail which foods Americans should eat or avoid. The highly influential document directs food labeling, school menus, public food programs, and government research grants.

Researchers claim the guidelines are based on “the preponderance of current scientific and medical knowledge.” Yet, since they were first introduced back in 1980, they’ve barely changed, even though a recent revolution in nutritional science has cast doubt on old assumptions.

END_OF_DOCUMENT_TOKEN_TO_BE_REPLACED

By Kip Hansen – Re-Blogged From http://www.WattsUpWithThat.com 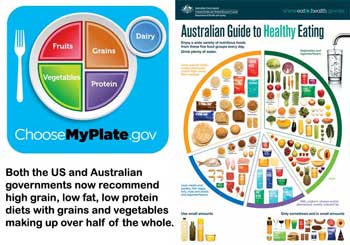 Prologue:  This is a follow-up to  a series of five essays that discussed ongoing scientific controversies, a specific type of which are often referred to in the science press and elsewhere as “Wars” – for instance, one essay covered the “Salt Wars1” and another the “Obesity War”.  The purpose of the series was to illuminate the similarities and differences involved in these ongoing controversies, with the final part (Part 5) showing the commonalities with the Climate Wars.    This essay illuminates two important new, potentially paradigm-shifting papers in the field of Human Nutrition and new findings in the Salt Wars that turn that entire field on its head.

Warning:  This is not a short essay.  Dig in when you have time to read a longer piece.