[Sick of Being Sick: I’ve been out of commission again, and I’d beter not speculate on how long this round of feeling well will last. Let’s just say that, I’ll post as I can. You know my usual resources, so if you need additional articles, feel free to go to the source(s). Thanks for understanding.  –Bob]

END_OF_DOCUMENT_TOKEN_TO_BE_REPLACED

The banks that are begging for bailouts still cling to their bonuses. To terrorize us into letting them keep their bonuses, the banksters are threatening to release the button on their suicide vests and blow themselves up by not taking the bailouts if they can’t have their bonuses.

You would think the response to that would be a no-brainer: “O.K. Go ahead.” Then just walk off. Watch, however, as the European Central Bank Supervisory Board Chair pretends to be getting firm with the banks because it’s so important that we bail them out on their terms: (The first two-minutes-and-twenty-seconds are all you need listen to. Any more could cause medically unnecessary nausea or brain injury as he goes to say that his recommended conservative measures are “not reflecting a specific fragility” in the European banking system at present. No, there’s none of that. All is well in Bailout Bonus Bonanzaland. They’re just doing unnecessary bailouts.) 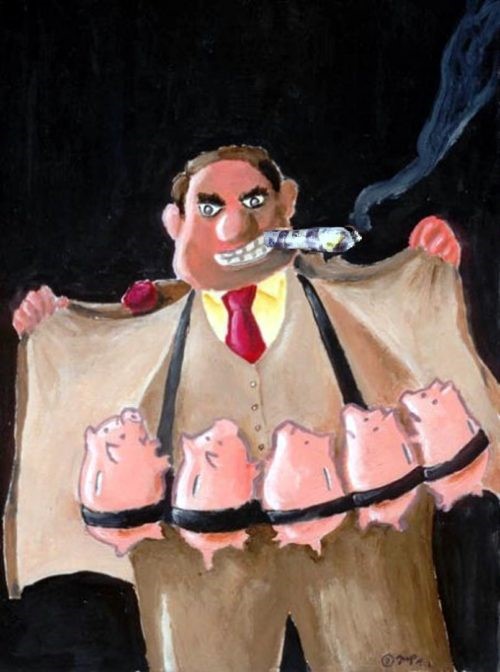 END_OF_DOCUMENT_TOKEN_TO_BE_REPLACED

Everyone knows the basics of the American Revolution: thirteen North American colonies revolted against British rule and won their independence. But there’s much more to the story: the American Revolution, of all revolutions, was a game-changer for the entire world. How so? And most importantly, why? Renowned historian Allen Guelzo explains.

By Tim Benson – Re-Blogged From WUWT

A new report prepared by Kleinhenz & Associates for the Ohio Oil and Gas Energy Education Program shows increased oil and natural gas production from hydraulic fracturing  (“fracking”) has saved American consumers $1.1 trillion in the decade from 2008 to 2018. This breaks down to more than $900 in annual savings to each American family, or $9,000 in cumulative savings.

These savings come from the lower cost of natural gas due to increased production. According to the report, “natural gas as measured using the average Henry Hub price has declined from a 2008 high of $8.86 to an estimated 2018 price of $3.16.” For households in the lowest economic quintile, the bottom 20 percent, the lower price for natural gas amounts to a savings of 2.7 percent of their annual income. “This is equivalent to a raise of 2.7% for the poorest households,” the report states.

The paper singles out the states of the “Shale Crescent”—Ohio, Pennsylvania, and West Virginia—noting they are “responsible for 85 percent of the net growth in natural gas daily production over the past ten years and now [account] for nearly one-third of U.S. natural gas annual production.”

END_OF_DOCUMENT_TOKEN_TO_BE_REPLACED

We visited a wind farm in southern Utah recently. I’ve always been curious about the costs, profitability, and physical size of these things as well as the footprint and environmental impact. I had 3 meetings with the man in charge of maintenance of the wind farm, a landowner who leases land accommodating 4 of the turbines, and a man who works in the industry in Colorado – and did some internet/newspaper research.

The maintenance superintendent told me they have 27 towers, that the installation cost was about $2 million each, and that each turbine is rated at 2.3 megawatts/hr but produces an average of 1.3 megawatts/hr (= 1,300 kW/hr). The blades are 187 ft long so the total height is nearly 400 feet high, and the tower at the base is about 13 ft in diameter encapsulated in huge quantity of concrete. The project pays about $1 million in taxes to the community each year and has a 20-year lease.

END_OF_DOCUMENT_TOKEN_TO_BE_REPLACED

By Tim Pearce – Re-Blogged From WUWT

Democratic messaging on climate change has been stunted throughout the midterm election cycle, and most candidates are turning to other issues to connect with voters, the New York Times reports.

END_OF_DOCUMENT_TOKEN_TO_BE_REPLACED

Wars benefit the political and financial elite. Most wars are on-going, whether they include formal Congressional declaration or military actions. The following wars will continue.

END_OF_DOCUMENT_TOKEN_TO_BE_REPLACED

By Alasdair Macleod – Re-Blogged From http://www.Gold-Eagle.com

It is a matter of personal interest that it was my uncle, Iain Macleod, who invented the term stagflation shortly before he was appointed shadow chancellor in 1965. It is no longer used in its original context. From Hansard (the official record of parliamentary debates) 17 November that year:

We now have the worst of both worlds —not just inflation on the one side or stagnation on the other, but both of them together. We have a sort of “stagflation” situation and history in modern terms is indeed being made.

END_OF_DOCUMENT_TOKEN_TO_BE_REPLACED

By Thomas Sowell – Re-Blogged From https://freedomoutpost.com

By Alasdair Macleod – Re-Blogged From http://www.Gold-Eagle.com

Since the advent of nineteenth century socialism, politicians and economists in the centre ground have argued for a balanced approach, where vital services are provided by the state, and capitalism is left to provide the rest. Vital services in a modern economy are taken to include pensions, unemployment and disability benefits, healthcare and education. Most states also provide communications, such as rail and road infrastructure, electrical grids and perhaps telecommunications. They often own and operate on behalf of the people utilities, such as the railways, ports, electricity and water.

END_OF_DOCUMENT_TOKEN_TO_BE_REPLACED

The purpose of this article is to draw the widest attention to the chronic inability of the economic establishment to forecast recessions. Next time you hear an economist make a prediction on mainstream media, your default assumption should be he or she is simply wrong.

Why do I allege this? An IMF economist, Prakash Loungani, did some interesting research in 2000 about the accuracy of economists’ forecasts. Using data taken from a publication called Consensus Forecasts (published by Consensus Economics), which is widely used as a source of independent estimates of economic growth by individual governments, Loungani found that of the 60 recessions recorded since 1989 in the 63 countries sampled, only two were forecast in April the year before and two-thirds remained undetected in the April of the year they occurred. Furthermore, analysts’ forecasts emanating from both private and public sector economists were little different, and had a strong bias towards optimism.

END_OF_DOCUMENT_TOKEN_TO_BE_REPLACED

My blog is about 2½ years old now, and I’ve had well over 30,000 views. Articles automatically also get posted onto my Facebook page, where a larger number of my friends see them; most of the comments show up on my Facebook page.

While I still write posts myself, the lion’s share are re-posts from friends around the world who write well on the issues which are important to me (hey, it’s my blog). Many times, I fall into the trap of forgetting that many (most?) readers have zero training (and less understanding) of the subjects I blog about.

Because so many people (Americans and not) have no real clue about the good that is Capitalism and the benefits that each person enjoys because of Capitalism, I’d like to go over a few basics. So, this is for the good people out there who say things like, “He can afford it,” and “He’s just greedy and only worrying about making a profit.”

END_OF_DOCUMENT_TOKEN_TO_BE_REPLACED

By Leo Goldstein – Re-Blogged From http://www.WattsUpWithThat.com

I think the Republican administration should renounce climate alarmism and climate pseudo-science sharply, unequivocally, and irrevocably.

END_OF_DOCUMENT_TOKEN_TO_BE_REPLACED

We learn, out of the blue, that “the Eurozone is performing well, but with opinions divided on the causes, doubts linger over whether it is a sustainable recovery” (Daily Telegraph, 19 April). We are also told that economic growth in the US is stalling, as evidenced by downward revisions by the Atlanta Fed, and the fact that the rate of increase in Loans and Leases by commercial banks is also stalling. The Bank of England was unable to forecast the strength of the UK economy in the wake of Brexit.

This article explains why this confusion occurs. It is clear the economics profession is ill-informed about the one thing it is paid to know about, and the commentary that trickles down to the ordinary person is accordingly incorrect. State-educated and paid-for economists always assume the private sector is the problem, when it is the burden of the state, and the state’s futile attempts to manage the consequences of its actions through the corruption of money.

END_OF_DOCUMENT_TOKEN_TO_BE_REPLACED

It appears there are two candidates running from the left wing of the Demopublican Party (Hillary and Bernie), and two and a half from the right wing (Trump, Cruz, and Kasich). Note: The media identifies the Lefties by their first names, a friendly and personal thing, unlike the Righties.

I find it distasteful discussing current political figures. But since somebody new is going to be president come November, it makes sense to figure out who that might be, in order to insulate yourself as much as possible from the damage they’ll do.

Let me start by saying that this is not just the most entertaining election I’ve ever witnessed. But after the 1860 election, which Lincoln won with 40% of the popular vote (the remainder split between Stephen Douglas and two other candidates), I suspect it will also be the most divisive, hostile, and critical to the future of the country. Ever.

Why do I say that? Because the U.S. hasn’t been this unstable since the unpleasantness of 1861–1865.