More honesty and less hubris, more evidence and less dogmatism, would do a world of good

“What can I do to correct these crazy, super wrong errors?” Willie Soon asked plaintively in a recent e-chat. “What errors, Willie?” I asked.

“Errors in Total Solar Irradiance,” he replied. “The Intergovernmental Panel on Climate Change keeps using the wrong numbers! It’s making me feel sick to keep seeing this error. I keep telling them – but they keep ignoring their mistake.”

END_OF_DOCUMENT_TOKEN_TO_BE_REPLACED

Quote of the Week: “There is a principle which is a bar against all information, which is proof against all arguments and which cannot fail to keep a man in everlasting ignorance – that principle is contempt prior to investigation.”— Herbert Spencer [H/t William Readdy]

Number of the Week: 42 Billion barrels

Old Science v. New “Evidence Free Science”: SEPP Chairman emeritus Fred Singer is “old school.” He does not make predictions until the facts are gathered, the evidence. Perhaps it was because he began his long professional career by using high altitude rockets to gather evidence about the atmosphere including measuring the energy spectrum of primary cosmic rays; the distribution of stratospheric ozone; the equatorial electrojet current flowing in the ionosphere and publishing the first studies on subatomic particles trapped in the Earth’s magnetic field: radiation belts, later discovered by James Van Allen.

END_OF_DOCUMENT_TOKEN_TO_BE_REPLACED

By MICHAEL BASTASCH AND DR. RYAN MAUE – Re-Blogged From http://www.WattsUpWithThat.com

From the “well maybe there was a hiatus after all” walkback department. Even Mann is on board with this paper. 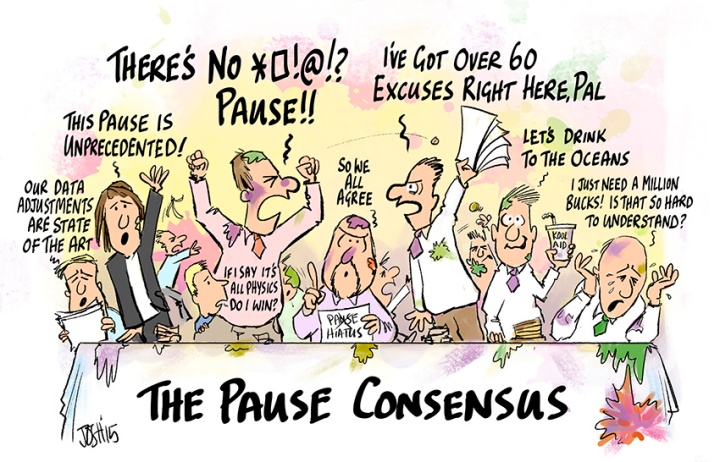 END_OF_DOCUMENT_TOKEN_TO_BE_REPLACED

You Ought to Have a Look: Time for a New “Hiatus” in Warming, or Time for an Accelerated Warming Trend?

As you can tell from our blog volume, there’s been a blizzard of new and significant climate findings being published in the refereed literature, and here’s some things You Ought to Have a Look at concerning the recent “hiatus” in warming and what might happen to our (now) post-El Niño climate.

With President Trump still deciding on U.S. participation in the Paris Climate Agreement, new research suggests the Earth’s global mean surface temperature (GMST) will blow past the so-called 1.5°C Paris target in the next decade. But before making that ominous prediction, Henley and King (2017) provide us with a good history lesson on a taboo topic in climate science circles: the recent global warming “hiatus” or “pause” from 1998-2014. One could be forgiven for thinking the hiatus was “settled science” since it featured prominently in the 2013 IPCC AR5 assessment report. But a concerted effort has been made in recent years to discount the hiatus as an insignificant statistical artifact perhaps based upon bad observational data, or a conspiracy theory to distract the public and climate policymakers. Even acknowledging the existence of the “hiatus” is sufficient to be labeled as a climate change denier.

END_OF_DOCUMENT_TOKEN_TO_BE_REPLACED

By Christopher Monckton of Brenchley – Re-Blogged From http://www.WattsUpWithThat.com

Mr. Obama’s remarks at the U.S. Coast Guard Academy’s Commencement May 20 demonstrate the extent to which his advisors are keeping him divorced from the facts.

END_OF_DOCUMENT_TOKEN_TO_BE_REPLACED

The federal government spent $22 Billion in 2013 ($165 Billion cumulative total) on global warming research grants, subsidies, junkets, etc. Global warming alarmism is being used to justify an anti-energy policy which is hurting all Americans, especially the poor.

The Models are the centerpiece that all the Alarmists point to, to “prove” that their vision of the end of the world is coming, are hopelessly lousy.