By Kip Hansen – Re-Blogged From WUWT

“For city authorities that are already struggling to maintain the current supply as climate change strikes, let alone source additional water, tankers can seem like a safety net they feel powerless to resist.’’

So Peter Schwartzstein writes in a feature piece in the New York Times titled “The Merchants of Thirst” in the 11 January 2020 online edition.

END_OF_DOCUMENT_TOKEN_TO_BE_REPLACED

Why can’t America build or repair infrastructure on a par with countries in Europe or Asia? Why are our bridges, roads, and airports not what they should be? Aren’t we the richest and most technologically savvy country in the world? Who or what is holding us back? Kyle Smith of National Review has the surprising (and frustrating) answer.

It has been said that “as California goes, so goes the nation”.  That is why it is such a shame what is happening to that once great state.  At one time, California seemed to be the epicenter of the American Dream.  Featuring some of the most beautiful natural landscapes in the entire world, the gorgeous weather and booming economy of the state inspired people from all over the world to move to the state.  But now people are moving out of the state by the millions, because life in California has literally become a nightmare for so many people.

END_OF_DOCUMENT_TOKEN_TO_BE_REPLACED

By Steven Hanke – Re-Blogged From http://www.Silver-Phoenix500.com

Economic policy is subject to fads and fashions. The most recent economic-policy fad is public infrastructure. Its advocates include progressives on the “left” – like President Obama, Hillary Clinton, and Bernie Sanders – and populists on the “right” – like President-elect Trump. They tell us to take the chains off fiscal austerity and spend – spend a lot – on public works. They allege that this elixir will cure many, if not all, of our economic ills. Let’s take a look at their arguments and evidence.

Economic growth remains muted throughout the world. The U.S. provides an important example. It has been over eight years since Lehman Brothers collapsed and the Great Recession commenced. But, the U.S. has failed to bounce back. The economy is still struggling to escape from a growth recession – a recession in which the economy is growing, but growing below its trend rate of growth. The U.S. aggregate demand, which is best represented by final sales to domestic purchasers (FSDP), is only growing in nominal terms at a 2.75 percent rate (see the accompanying chart). This rate is well below the trend rate of 4.73 percent.

END_OF_DOCUMENT_TOKEN_TO_BE_REPLACED

The United States is sitting on top of a massive amount of aging infrastructure that continues to disintegrate at an alarming rate.  According to the American Society of Civil Engineers, the U.S. suffers from 240,000 water main breaks a year.  That’s roughly 700 water main breaks each day. 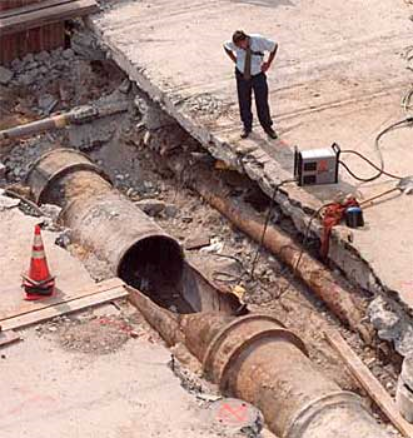 END_OF_DOCUMENT_TOKEN_TO_BE_REPLACED

By Michael Sargent – Re-Blogged From http://www.heritage.org/

Today the House Transportation and Infrastructure committee will mark-up their “long-term” highway bill, the Surface Transportation Reauthorization and Reform (STRR) Act, with only a week left before the deadline.

Spanning six years, STRR is the House’s response to the big-spending DRIVE Act that passed in the Senate at the end of July, just before Congress decided on a short-term, $8 billion patch instead.

Those who expected the “reform” part of STRR to be the emphasis will not find much to like in the legislation. STRR is another status-quo bailout that perpetuates the chronic overspending and misallocation of resources spent out of the Highway Trust Fund. The bill, which totals $325 billion in spending, keeps current funding levels in place (adjusted for inflation) while completely disregarding the annual deficit of about $15 billion expected over the next six years.