I mentioned in a recent article that the weird thing about this recession is that it is the only one in which personal income has gone up during a recession. That, of course, is because of government assistance, which is making it so we don’t have to feel the pain of a recession that the government, itself, caused — through its massive debt, tax breaks for the 1%, reliance on the Fed to solve government’s problems, and most currently through its forced economic shutdown as a response to COVID-19 — something that even the WHO now says was failed policy that should never have happened — even though they helped make sure it did happen!

END_OF_DOCUMENT_TOKEN_TO_BE_REPLACED 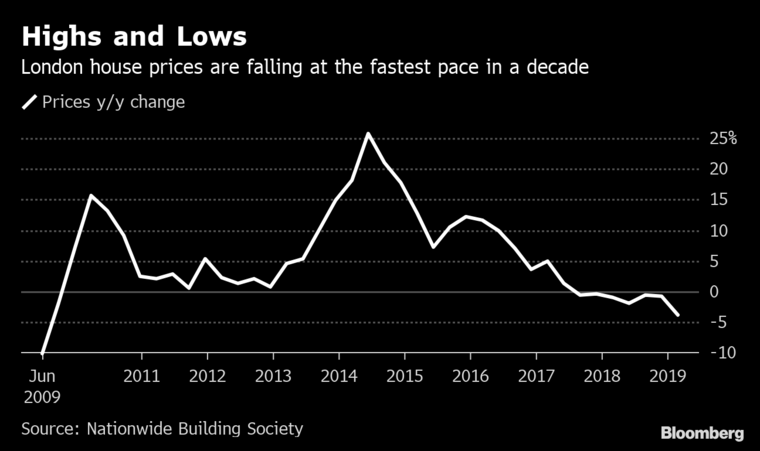 London continued to lead the U.K.’s weakening property market at the start of 2019, with prices falling the most since the financial crisis a decade ago.

END_OF_DOCUMENT_TOKEN_TO_BE_REPLACED

In a previous analysis we examined how to create a 21% yield, as the incidental byproduct of the Fed’s plans for the cyclical containment of recession.

In this analysis, we will deepen that examination and visually illustrate the financial mathematics that would create a potential 48% yield from what the Federal Reserve plans to do in the event of another recession.

This analysis is part of a series of related analyses, an overview of the rest of the series is linked here.

Step One: Turning Zero Percent Interest Rates Into A 21% Yield 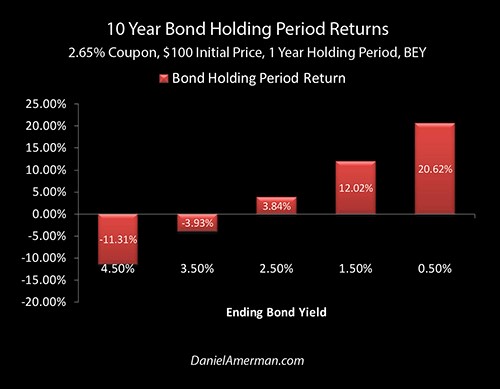 END_OF_DOCUMENT_TOKEN_TO_BE_REPLACED

The housing market indicated that a crisis was coming in 2008.  Is the same thing happening once again in 2018?  For several years, the housing market has been one of the bright spots for the U.S. economy.  Home prices, especially in the hottest markets on the east and west coasts, had been soaring.  But now that has completely changed, and home sellers are cutting prices at a pace that we have not seen since the last recession.  In case you are wondering, this is definitely a major red flag for the economy.  According to CNBC, home sellers are “slashing prices at the highest rate in at least eight years”…

END_OF_DOCUMENT_TOKEN_TO_BE_REPLACED

For a year and a half I’ve been writing about the retail apocalypse that is going to add to US financial woes. This is not a problem created by economic collapse but a problem that I have said will greatly contribute to economic collapse and that is so massive and widespread that it assures some level of economic decline all on its own. As everyone knows, the problem is largely created by a change in shopping paradigms (mostly due to Amazon) that is shuttering brick and mortar stores as people shop online.

END_OF_DOCUMENT_TOKEN_TO_BE_REPLACED

By Michael Pento – Re-Blogged From http://www.PentoPort.com

We should all be familiar with the aphorism, “as real estate goes, so goes the economy.” Anyone ignoring that economic axiom was completely blindsided by the Great Recession of 2008. Well, the collapse of the Everything Bubble most certainly includes the real estate market…and this time around will definitely not be different.

The plain and simple fact is that home ownership is getting further out of reach for the average consumer as mortgage rates rise. This is especially true for the first-time home buyer. The 30-year fixed rate mortgage is now the highest level since January 2014, 4.64%

With mortgage rates now more than half a percentage higher than at the start of the year, homebuyers are already getting priced out of an overvalued real estate market. This means that just by waiting a couple of months to buy a home, someone buying the typical U.S. home would be paying an extra $564 per year on their mortgage. Over the lifespan of a 30-year mortgage, that adds up to nearly $17,000, according to Zillow.

The rise in mortgage rates has caused purchase applications to fall to a level that is now just 1% above the year ago period. The current trajectory clearly shows the YOY change should soon be negative; and as housing goes into recession the economy is sure to follow. In fact, Year-on-year, Existing Home Sales were down 4.8%, the largest decline since August 2014. Prices also dropped considerably in January; the median selling price fell by 2.4%.

Sales of New U.S. homes fell in January for the second straight month. The Commerce Department says sales came in at a seasonally adjusted annual rate of 593,000 units, which was the lowest since August and down 7.8%t from a revised 643,000 in December.

And the Pending Home Sales Index in January fell 4.7%, to 104.6. This was the lowest level for that Index in nearly 3.5 years. According to Bloomberg, this points to a third straight decline for final sales of existing homes, which already fell very sharply in both January and December.

You see, you have to look at both sides of the equation: Tax cuts are simulative to growth, but rising debt service costs are a depressant, especially when imposed upon the record $49 trillion worth of total U.S. non-financial debt, which is up an incredible 47.5% in the last ten years. Earnings Per Share on the S&P 500 are getting a huge one-time boost from lower corporate rates, but debt service payments are rising sharply and will offset much of those gains.

Every one percent increase on the average interest payment on the National Debt equates to and additional $200 billion of debt service payments. And individual households aren’t doing much better managing their debt than corporations and government. in fact, total household debt rose to an all-time high of $13.15 trillion at year-end 2017–an increase of $193 billion from the previous quarter, according to the Federal Reserve Bank of New York. According to Equifax, In December, mortgage debt balances rose by $139 billion. And according WalletHub, U.S. consumers racked up $92.2 billion in credit card debt during 2017, pushing outstanding balances past $1 trillion for the first time ever. The $67.6 billion in credit card debt that was added in Q4 2017 is the highest quarterly accumulation in 30 years–68% higher than the post-Great Recession average.

Total outstanding non-financial U.S. corporate debt has risen by an unbelievable $2.5 trillion (40%) since its 2008 peak. This means, according to former OMB Director David Stockman, that even if the 10-year Note rises to only 3.75%, the average after-tax interest expense for the S&P 500 companies will rise from $16 per share (2016 actual), to $36 per share. And would erase nearly all of the corporate tax rate deduction.

The fact is, It’s hard to make the argument that any group has been deleveraging. What this all means is that the debt-disabled economy is more susceptible to rising rates than ever before. In other words, the bursting of the greatest economic distortion in history—the worldwide bond bubble—is now slamming into the most massive accummulation of global debt ever recorded. To be specific, debt has surged to the unprecedented level of 330% of global GDP.

Indeed, when looking at the Real Estate rollover, falling Durable Goods orders and spiking trade deficits, it’s hard to make a cogent argument that GDP growth has shifted into a higher gear. And now, the first salvos of an international trade war have been fired off. What started as tariffs on just solar panels and washing machines has now morphed into a tax on everything made of aluminum and steel. Tariffs are simply taxes on foreign made goods that eventually get passed onto American consumer in the form of higher prices; and will serve to further offset the cuts on corporate and individual tax rates.

Wall Street has become downright giddy over the tax reform package, but at the same time completely overlooking the coming drag on GDP from spiking debt service costs and trade wars; which will further pressure Treasury yields higher as China recycles less of its trade surplus into dollars.

Once the tax cut and repatriation-induced buy-back buzz wears off, the stock market will be in serious trouble. That should occur sometime this fall. Unfortunately for the Wall Street perma-bulls, the timing for the end of debt-fueled repurchases couldn’t be worse. Because come October, the Fed will be selling $50 billion worth of bonds per month and will have raised the Funds Rate three more times. In addition, deficits will have spiked to well over $1 trillion per year. Rapidly rising interest rates should ensure economic growth and EPS comparisons become downright awful just as the economy rolls over from crushing debt service costs.

Indeed, the stock market will soon lose its last major leg of support—debt-fueled share buybacks. According to Artemis’s calculations, share buybacks have accounted for +40% of the total EPS growth since 2009, and an astounding +72% of the earnings growth since 2012. Thanks to the tax cuts and repatriation legislation, buybacks are already on a record pace for 2018 — $171 billion worth have been announced so far this year, which is more than double the amount announced this time last year. Rising corporate debt levels and higher interest rates are a catalyst for slowing down the $500-$800 billion in annual share buybacks that have artificially supporting EPS and markets. But as already noted, these will also become a causality of the bond market’s demise.

You still have time to put into place an investment strategy that at least attempts to preserve and profit from the coming yield-shock-induced recession–and the subsequent stock market and economic collapse that is sure to follow. But time is quickly running out.

END_OF_DOCUMENT_TOKEN_TO_BE_REPLACED

Central banks in general and the Fed in particular are struggling to understand a world in which they’ve thrown everything they have at the economy without generating “beneficial” inflation. Their confusion can be traced back to some profoundly false assumptions.

Here’s a good overview of the current debate:

END_OF_DOCUMENT_TOKEN_TO_BE_REPLACED

By Anthony Gilbert – Writer at http://www.realfx.com/blog/

Hyperinflation is a rapid increase in inflation where the prices rise so drastically that calling it inflation becomes meaningless.  While there is no set percentage for hyperinflation, it is often used to describe price increases of 50% or more over a short period.  The sharp increase is what separates hyperinflation from other types of inflation.

Hyperinflation can occur when the government begins printing larger amounts of money to pay for spending.  As the amount of money being printed increases, the prices of goods and services will increase.  Typically the government would lower the supply of money to curb inflation, but when they continue to print more, there can be an imbalance in supply and demand of currency.  Prices will then skyrocket, and currency will begin to lose its value.  This results in hyperinflation.  Hyperinflation can occur at any time but historically has often happened as results of war economies.

END_OF_DOCUMENT_TOKEN_TO_BE_REPLACED

By Michael Pento – Re-Blogged From http://www.Silver-Phoenix500.com

One of the most ironic and fascinating characteristics about an asset bubble is that central banks claim they can’t recognize one until after it bursts. And Wall Street apologists tend to ignore the manifestation of bubbles because the profit stream is just too difficult to surrender.

The excuses for piling money into a particular asset class and sending prices several standard deviations above normal are made to seem rational at the time: Housing prices have never gone down on a national basis and people have to live somewhere, the internet will replace all brick and mortar stores, and perhaps the classic example is that variegated tulips are so rare they should be treated like gold.

END_OF_DOCUMENT_TOKEN_TO_BE_REPLACED

Wednesday the Fed made their announcement and deleted the famous word “patient”.  I have never seen such a nonsensical frenzy over anything, never mind a single word.  The reaction was everything …except the dollar was bid.  Sadly, reality has also been deleted as the Fed cannot “go there”, if they did and when they do (are forced to), life as we knew it will be history.  Reality is the global economy has stalled.  Most of Europe is in recession, China’s growth has stalled and the U.S., even with fudged numbers will not be able to show any growth.