You’d think the previous decade’s housing bust would still be fresh in the minds of mortgage lenders, if no one else. But apparently not.

One of the drivers of that bubble was the emergence of private label mortgage “originators” who, as the name implies, simply created mortgages and then sold them off to securitizes, who bundled them into the toxic bonds that nearly brought down the global financial system.

The originators weren’t banks in the commonly understood sense. That is, they didn’t build long-term relationships with customers and so didn’t need to care whether a borrower could actually pay back a loan. With zero skin in the game, they were willing to write mortgages for anyone with a paycheck and a heartbeat. And frequently the paycheck was optional.

END_OF_DOCUMENT_TOKEN_TO_BE_REPLACED

Ten years after a financial meltdown, America hasn’t grappled with the root problems.

Interest rates on the United States’ ten-year Treasury bond recently hit 3 percent, which should be regarded as historically low. Instead, a decade after the financial crisis began, it’s remarkable for being that high, and economic and financial experts can’t agree on whether this new rate portends a brewing economic miracle or a looming economic crisis. What it really reflects is a conundrum: the economy is doing well, but in large part because Americans have borrowed too much, too fast, and at too-low rates—and a real risk exists that normal interest rates will kill this debt-fueled boom. In the decade after the 2008 debt-based meltdown, the U.S. still hasn’t kicked its addiction to borrowing.

END_OF_DOCUMENT_TOKEN_TO_BE_REPLACED

Like the disintegration of the formerly charmed stock market, the return of Carmageddon is right on schedule. I had stated early last year that one of the first cracks in our economy to become evident would be the crash of the car industry.

That crack materialized as promised, but then Hurricanes Harvey and Irma showed up to flood a million automobiles. Before any statistics materialized to show the economic impacts of those storms, I wrote the following revision for the dates of Carmageddon: 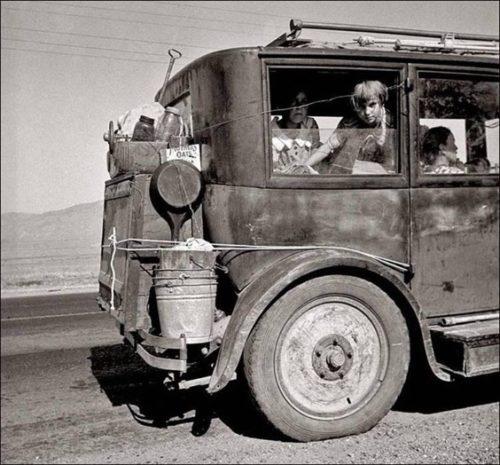 END_OF_DOCUMENT_TOKEN_TO_BE_REPLACED

All that’s missing is subprime mortgages and we’d have every bubble base covered. Oh wait, those are back too, just under a different name:

END_OF_DOCUMENT_TOKEN_TO_BE_REPLACED

It looks like the subprime auto loan bubble has popped.

Last year, we reported that the auto industry’s check engine light was on. Now it looks like the thing is totally breaking down. Small subprime auto lenders are starting to go belly-up due to increasing losses and defaults. As ZeroHedgenoted, “we all know what comes next: the larger companies go bust, inciting real capitulation.”

END_OF_DOCUMENT_TOKEN_TO_BE_REPLACED

Financial crises tend to start at the periphery and work their way into a system’s core. Think subprime mortgages (a tiny little niche of a few hundred billion dollars) that blew up in 2007 and nearly brought the curtain down on the whole show.

There’s no guarantee that the same dynamic will play out this time, but stage one – the bursting of peripheral bubbles – has definitely arrived, with three in progress as this is written.

END_OF_DOCUMENT_TOKEN_TO_BE_REPLACED

Private-equity firms that plunged headlong into subprime auto lending are discovering just how hard it might be to get out.

A Perella Weinberg Partners fund has been sitting on an IPO of Flagship Credit Acceptance for two years as bad loan write-offs push it into the red. Blackstone Group LP has struggled to make Exeter Finance profitable, despite sinking almost a half-billion dollars into the lender since 2011 and shaking up the C-suite multiple times.

And Wall Street bankers in private say others would love to cash out too, but there’s currently no market for such exits.

In the years after the financial crisis, buyout firms poured billions into auto finance, angling for the big profits that come with offering high-interest loans to buyers with the weakest credit. At rates of 11 percent or more, there was plenty to be made as sales boomed. But now, with new car demand waning, they’ve found the intense competition — and the lax underwriting standards it fostered — are taking a toll on profits.

END_OF_DOCUMENT_TOKEN_TO_BE_REPLACED

From Bloomberg – Re-Blogged From Newsmax

Amid all the reflection on the 10-year anniversary of the start of the subprime loan crisis, here’s a throwback that investors could probably do without.

There’s a section of the auto-loan market — known in industry parlance as deep subprime — where delinquency rates have ticked up to levels last seen in 2007, according to data compiled by credit reporting bureau Equifax.

END_OF_DOCUMENT_TOKEN_TO_BE_REPLACED

For this reason, we refer to sub-prime auto-loans as Subprime 2.0.

END_OF_DOCUMENT_TOKEN_TO_BE_REPLACED

Economists stated that main trigger for the financial crisis of 2008 was the issuance of mortgages that did not require down payments.  The ease at which one could get mortgages in the past is what drove housing prices to unsustainable levels. Post-crisis all banks vowed to end the practice forever, or that is what they wanted everyone to believe.   When the credit markets froze, we openly stated that the 1st sign that banks were getting ready to lower the bar again would come in the form of Zero percent balance transfer offers that had all but vanished after 2008.  A few years after 2008, banks started to mail these offers out. Consequently now, everywhere you look you can find 0 % balance transfer offers ranging from 12 months to 18 months.  The next step after that would be for banks to lower the 20% down payment required to something much lower. Currently, Bank of America and a few other banks are offering 3% down mortgages.

Now Barclays Bank has become the first British bank to turn back the hands of time; it has started to issue 0% down Mortgages under a program called “family springboard”.  There is, however, one small difference. In this instance, a parent would put 10% of the down payment into an account. If payments are made in a timely fashion, this amount is returned in three years with interest.

END_OF_DOCUMENT_TOKEN_TO_BE_REPLACED

By Frank Hollenbeck – Re-Blogged From http://www.Gold-Eagle.com

President Obama and Fed Chair Janet Yellen have been crowing about improving economic conditions in the US. Unemployment is down to 5.5 percent and growth in 2014 hit 2.2 percent.

Journalists and economists point to this improvement as proof that quantitative easing was effective.

END_OF_DOCUMENT_TOKEN_TO_BE_REPLACED

By Michael Pento – Re-Blogged From http://www.Silver-Phoenix500.com

In 1982 the artist formally known as Prince released a popular party anthem called “1999”. The song was a premonition that 1999 would be a year we would all aspire to “party like”.  It was obvious that Prince was making reference to the excitement associated with ringing in a new century.  However, unbeknownst to him, the accommodative policies of the Federal Reserve would lead to a festal bubble in NASDAQ stocks, making his call to party in 1999 that much more appropriate.

END_OF_DOCUMENT_TOKEN_TO_BE_REPLACED

By David Stockman – Re-Blogged From http://davidstockmanscontracorner.com

Yesterday’s WSJ article on rising auto loan delinquencies had a familiar ring. It focused on sub-prime borrowers who were missing payments within a few months of the vehicle purchase. Needless to say, that’s exactly the manner in which early signs of the subprime mortgage crisis appeared in late 2006 and early 2007.

END_OF_DOCUMENT_TOKEN_TO_BE_REPLACED

In 2007, a Financial Crisis, initially largely involving Sub-Prime Mortgages, hit the US. Many large banks and other financial institutions were on the brink of bankruptcy, and a few slightly smaller ones did fail.

We’re told that the FDIC exists to protect depositors, but the FDIC’s fund is so small, at $25 Billion, compared to depositor’s money at risk, at $9,283 Billion, that it’s considered a joke within the industry.

Sub-Prime Loans, then also called Liar Loans, were packaged, using Fannie & Freddie guarantees, into Collateralized Debt/Mortgage Securities, and sweetheart deal ratings were extorted out of the three major ratings agencies. These, together with other derivatives, totaled almost $300 Trillion of bets made by the various financial institutions.

These derivatives were marketed widely in the US, and also in Europe. When the underlying Sub-Prime mortgages started defaulting, the prices on CMSs plunged – this is what almost crashed Europe!

To try to prevent the “End of the Financial World as We Know It,” the US Government embarked on massive bailouts of the stupidly run, “Too Big To Fail” institutions, at taxpayer expense. These bailouts have never ended, and the US FED added ZIRP (Zero Interest Rate Policy), QE1, Operation Twist, QE2, and QE3 on top of the bailouts  .

There has been something of a public uproar over the bailouts, so the idea of a “Bail-In” was tried out in Cyprus a few years ago. A Bail-In is where the law allows depositors to lose their money before others. Deposits are “converted” into stock of the institution so that it can continue mismanaging its affairs without interruption. That stock loses value very quickly.

Since the Bail-Ins “worked” well in Cyprus, the practice has been adopted by most Western governments, including here in the US. So, if you have money in an account with one of the Too Big To Fail banks, and there’s another financial crisis, you’re going to lose part or all of your money! Here’s a list of the 29 banks in this category worldwide:

The FED’s ZIRP has caused yet another bubble to be blown, this time for Sub-Prime auto loans. These loans have rates around 20%, with loan amounts as high as 115% of the car price. With these, Sub-Prime loans are back up to $120 Billion.

And now, Fannie & Freddie are starting to rev up their loans again, with down payments as low as 3% of equity. Sub-Prime is likely to be a problem again soon.

And all those derivatives, in the 100s of Trillions, are still weighing on the liability side of the Big Banks. With Bail-Ins protecting these financial institutions with your money, you may want to look at that list again and make sure your accounts are elsewhere.

But, you still aren’t in the clear. If you have a pension, there’s a good chance that all your money in the pension fund may be invested in debt of these banks. It’s your money so it’s up to you to find out and tell your pension to stop.

Action Item: Bail-Ins violate the fiduciary responsibility of the financial institutions which benefit at depositors expense.