Mike Gleason: It is my privilege now to welcome back Michael Pento, President and founder of Pento Portfolio Strategies. Michael’s a well-known money manager, market commentator and author of the book, The Coming Bond Market Collapse: How to Survive the Demise of the U.S. Debt Market. He’s been a regular guest with us over the years and we always love getting his fantastic insights.

Well, we’re having a hard time seeing a big move higher in metals prices until one of two things happen. We’ll start here. The first would be a pickup and safe haven demand. In our view there is too much investor complacency given the circumstances as has been the case for a while now, equity market valuations are sky high. Now we’ve got an election coming up, and there is at least some chance our next president will be an avowed socialist. This does not seem like the time for investors to be all in on risk trades, but we suppose the only thing that really matters is the Fed. They are going to do whatever it takes to keep the party in the stock markets going.

But what are your thoughts? Are we likely to see the markets get a wakeup call anytime soon or is the Fed likely to maintain complete control for the foreseeable future? Let’s start there.

Michael Pento: What a great question. Geez, you hit me over the head with a, a big anvil. That’s the $20 trillion question. I mean, can the market continue to defy gravity – and it is defying gravity, make no mistake about it. If you look at the total market cap to GDP, I look at the Wilshire 5000, that doesn’t have 5,000 stocks anymore. I think it’s like 3,500 but it’s the widest measurement of stocks, their market cap, to the underlying economy. That ratio is now 155%. Outside of March of 2000 when it was 145 or 148 around there, it’s never been near this. The average ratio is 0.8%… 80% or 0.8 in the ratio. So 155%, 1.55% above where the underlying supporting economy is. I mean it’s never been anywhere near this outside of that epic bubble in the NASDAQ debacle where the NASDAQ lost 80% of its value.

END_OF_DOCUMENT_TOKEN_TO_BE_REPLACED

The US stock markets are becoming more unstable, fueling mounting anxiety about what’s likely coming. After surging to new all-time-record highs in late July, stocks plunged in a sharp pullback as the US-China trade war escalated. Stock markets’ resiliency in the face of bearish news is partially determined by how companies are faring fundamentally. The big US stocks’ just-reported Q2’19 results illuminate these key indicators.

END_OF_DOCUMENT_TOKEN_TO_BE_REPLACED

By Roger Caiazza – Re-Blogged From WUWT

One of the biggest issues with plans to replace fossil fuels with renewable energy is intermittency. At some point that can only be addressed by energy storage but tracking down those costs is difficult. I recently found a recently released report from the National Renewable Energy Lab (NREL): “2018 U.S. Utility-Scale Photovoltaics-Plus-Energy Storage System Cost Benchmark” that provides information that can be used to estimate the costs of the energy storage option.

According to the NREL summary, authors Fu and Margolis, along with fellow NREL researcher Timothy Remo, provide NREL’s first cost benchmarking of energy storage and PV-plus-storage systems. The abstract for the report states:

END_OF_DOCUMENT_TOKEN_TO_BE_REPLACED

The combination of American trade protectionism and the end of a failing credit expansion is leading into a global economic downturn, and potentially a systemic crisis. Meanwhile, investors still believe more extreme monetary policies will stabilise economies and that the ultra-low interest rate environment will persist without renewed price inflation. As Samuel Johnson reputedly said of a second marriage, it represents the triumph of hope over experience.

There is a moment just after the top of every credit cycle where positive momentum stalls before a new reality emerges. When the stall begins, as appears to be the case today, everything is still read positively. Perennial bulls say “Don’t worry, the central bank will reduce interest rates and inject enough money into the banking system to ensure any recession will be minor and growth will resume”. With interest rates falling, confidence in the final outcome means stocks continue to rise. With this mindset, bad news for the economy is always good news for stocks.

END_OF_DOCUMENT_TOKEN_TO_BE_REPLACED

These record US stock-market levels are very dangerous, riddled with extreme levels of euphoria and complacency.  Largely thanks to the Fed, traders are convinced stocks can rally indefinitely.  But stock prices are very expensive relative to underlying corporate earnings, with valuations back up near bubble levels.  These are classic topping signs, with profits growth stalling and the Fed out of easy dovish ammunition.

Stock markets are forever cyclical, meandering in an endless series of bulls and bears.  The latter phase of these cycles is inevitable, like winter following summer.  Traders grow too excited in bull markets, and bid up stock prices far higher than their fundamentals support.  Subsequent bear markets are necessary to eradicate unsustainable valuation excesses, forcing stock prices sideways to lower until profits catch up.

END_OF_DOCUMENT_TOKEN_TO_BE_REPLACED

To put into perspective how overvalued and dangerous the US market has become; I often cite the figure of total market cap to GDP—currently 145% of the economy. How high is 145% of GDP? It is a full 30% higher than it was before the start of the Great Recession.

The twin sister to this metric is the Household Net Worth to GDP Ratio. Household net worth as a percent of GDP is calculated by dividing the current bubbles in home prices and equities by the underlying economy, which has been artificially inflated by interest rates that have been pushed into the sub-basement of history. This metric is now an incredible 535% of GDP, which is a record high and 19% higher than the NASDAQ bubble of 2000. To put that figure in perspective, the good folks at Daily Reckoning have calculated that the historical average is 384%.

These valuation measurements are much more accurate than Wall Street’s favorite PE ratio valuation barometer because they cannot be easily manipulated by corporate share buybacks that have been facilitated by record-low borrowing costs. And, as hinted at already, the GDP denominator of today is much more tenuous because it has become more than ever predicated on the record amount of fiscal and monetary stimulus from the government.

END_OF_DOCUMENT_TOKEN_TO_BE_REPLACED

That measure of U.S. debt increased exponentially from 1951 to 2007 at a rate of 8.8% per year. However, the rate from 2008 to 2017 has been only 2.6% per year. A sixty-year trend changed during the 2007-08 financial crisis. As suggested by others the U.S. reached debt saturation. The economy has not recovered since the crisis. The graph of credit market debt supports that thesis. 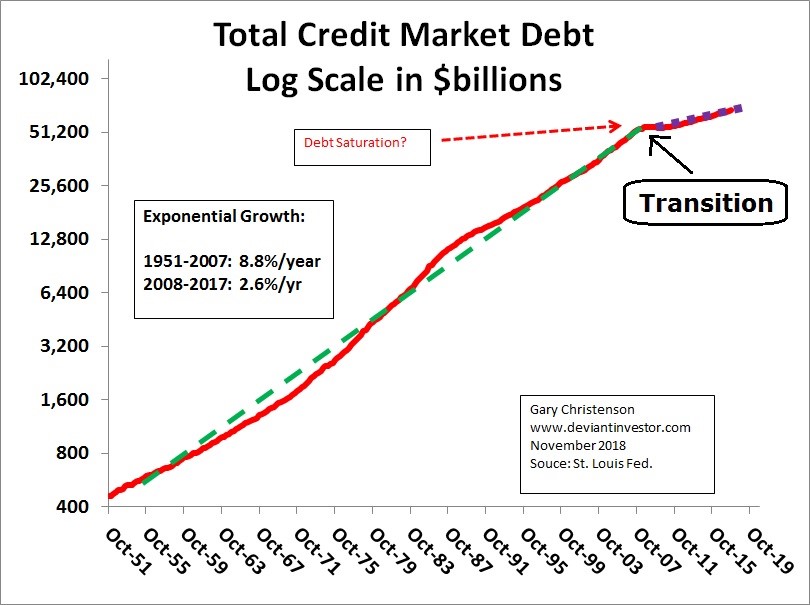