Bizarrely, and unlike almost every other industrialized country, the US has fuel efficiency standards for cars. Each corporation (Ford, Chevy, etc.) has to meet certain fuel economy standards called the CAFE standards.

So I object to ANY automotive fuel standards as both totally un-necessary, and worse, market distorting.

Here’s one important way it distorts the market. “Fuel Economy” is measured in a very curious way. Work efficiencies are usually measured per pound or per kilogram moved. Efficiency would relate to how much energy it takes to move say a hundred kilograms a distance of 10 metres horizontally. If you can move the same weight at the same speed using less energy, you have a more efficient setup.

But that’s not how the CAFE standards work. They’re measured in miles per gallon (or kilometres per liter, with 1 mpg ≈ .4 km/l), with no consideration of how much weight is being moved. This means that if you put the same identical engine in both a heavier car and a lighter car that are otherwise identical, they get assigned different “economy” numbers. But in fact, the efficiency of the engine, the drive train, the rolling resistance, and the aerodynamics is the same in both cases.

But under the CAFE rules, if you merely make your car lighter, you can claim it’s more “economical”. They’ve done a clever switch of “economy” for “efficiency” … bad bureaucrats, no cookies.

Now, making car bodies lighter is generally cheaper than making car engines and drive trains more efficient. So as a result, most of the gains in meeting the CAFE standards have come from making vehicles lighter.

Unfortunately, there is an ugly truth about cars. Less car weight in crashes means more injury and more deaths. Here’s the cold equation—the less steel that gets bent in a crash, the more flesh and bone that gets bent in a crash. The National Academy of Sciences wrote about this as far back as 2002. They said the CAFE standards were killing about 2,000 people per year.

So we have totally distorted the auto marketplace into trading human blood and misery for fuel economy … not a good plan on my planet.

I got to thinking about this again because the President is proposing a re-examination of Comrade Obama’s insane attempt to increase fuel efficiency by imperial fiat. Before he left office, then-President Obama put in new CAFE standards mandating a ludicrous corporate average fuel efficiency of 54.5 miles per gallon (23 km/l) !!!. I cracked up laughing when he first made his Royal And Really Important Official Proclamation Regarding Economy. That charming fellow truly thought that he could just pick a number no matter how high, and magically the cars would get that much more efficient.

President Obama obviously didn’t understand that the one reliable rule about increasing efficiency is that every percent gained comes harder and costs more than the previous percent gained. The first ten percent gained is easy, the next ten percent is harder, and after a while it takes piles of money and effort to gain even one more percentage point.

Case in point? The CAFE standards. Care to guess how much the US nationwide light vehicle fuel “economy” has increased over the last quarter century?

An increase of a whopping two miles per gallon. Less than half a kilometer per liter.

Truly. All that grief, all that money wasted, for a sorry two pathetic miles per gallon increase. Here’s the data: 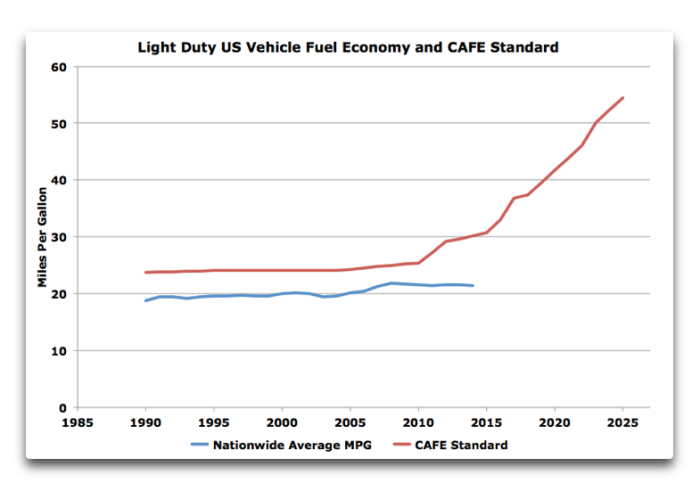 Be still my beating heart, the excitement of the real-world economy increase is getting to me …

You can see how well the CAFE standards actually work. From 1990 to 2014, almost a quarter century, the CAFE standards were well above the actual efficiency. During that time the efficiency should have been rising … but they didn’t budge one bit. Well, that’s not quite true … the MPG inched upwards. But then, given the general increase in all machinery over time, we’d expect that even if CAFE standards did not exist.

Me, I support the Gordian Knot solution to this lunacy—get rid of the fershlugginer CAFE standards completely, root and branch. Those standards are the reason that Volkswagon had to cheat on their pollution controls. Like other manufacturers, they could make a relatively clean-air car, or they could make a high “fuel economy” car … but not both.

And this is the ultimate irony. The CAFE standards were supposed to reduce pollution, but they couldn’t even do that. Instead they drove manufacturers to make the air dirtier just so they could meet the CAFE requirements.

Other countries were smart enough to never create such cockamamie standards in the first place. But having made the foolish mistake, at least we should correct it as soon as possible.

My best to everyone, you’re all invited to come over to my blog and see what the latest madness might be …