By Reva Goujon – Re-Blogged From https://worldview.stratfor.com

A lot of history is being casually tossed around these days. We see it from energized segments of the “alt-right” throwing up Nazi salutes, calling for a “revolution” against “the Bolsheviks” and marching to chants like “Jews will not replace us.” We see it from their anti-fascist adversaries on the left, branding themselves antifa, a movement that draws its roots from the Antifaschistische Aktion resistance from 1930s Germany. We see it from world leaders when Turkish President Recep Tayyip Erdogan brazenly calls his German and Dutch counterparts Nazis and fascists and when U.S. President Donald Trump ardently defends Confederate statues as symbols of “heritage not hate.” We see it from jihadist groups like the Islamic State when a member of the Barcelona attack cell calling himself Abu Lais of Cordoba spookily reminds Spanish Christians to remember “the Muslim blood spilled” during the Spanish Inquisition as the group fights to reincorporate “Al Andalus” into a revived caliphate.

The Third Reich. The Bolshevik Revolution. The American Civil War. The Spanish Inquisition.  This is heavy, heavy history. Yet in the words of some actors, some of the darkest days of our historical memory seem to take on a weightless form in today’s angst-ridden political discourse. While jarring to observe, this kind of historical levity is to be expected whenever the world moves through a major inflection point. When more wretched periods of history lie just beyond the horizon of the current generation, they become fuzzy, impersonal anecdotes rather than visceral memories that impress upon everyday lives. And when the future looks especially bleak to that same generation, a raucous few can capture the minds of many by plunging deep into the depths of a blemished history to conjure up leaders and legends that, with a bit of polishing and dusting off, can serve as the unadulterated icons of a new world order. 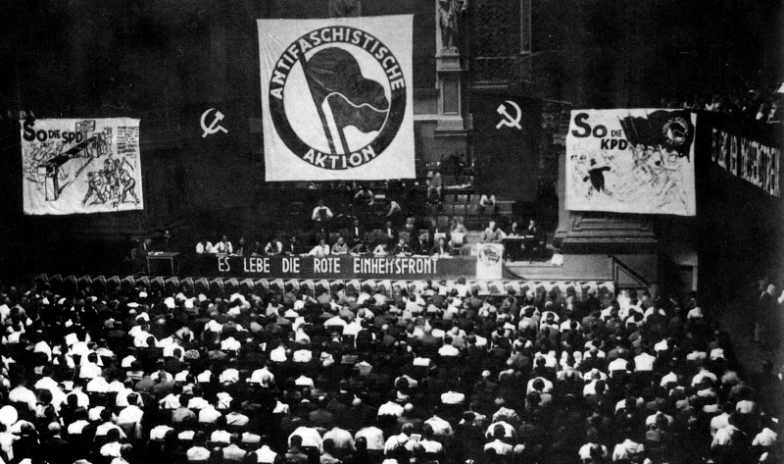 Today’s antifa movement in the United States models itself after Germany’s anti-fascists in the 1930s.

The reasoning behind the tactic is fairly simple. Leaders and movements that try to implement a revisionist agenda in the world crave two things: credibility and power. If the masses can be seduced by a narrative with historical legs (however flimsy those legs may be), then power will presumably follow. And if credibility does not come naturally, then the amassing of state power enables the distortion of facts and silencing of critics. After all, mimicking history is a far easier strategy to pursue than trying to understand and innovate yourself out of the deeper problems of the present.

At the same time, history is just as important to internalize in tense times like these. How else will current and future generations learn from and avoid the mistakes of their past?

Tackling the Dilemma of History

It is this very dilemma of how to responsibly treat history that German philosopher Friedrich Nietzsche tried to tackle in an essay titled “On the Use and Abuse of History for Life” as part of his Untimely Meditations series. When Nietzsche published this work in 1873, just two years following German reunification led by Otto Von Bismarck, he described himself as “out of touch with the times.” While almost everyone around him was celebrating the music of Richard Wagner and erecting monuments to the heroes of the Franco-Prussian War in the act of knitting together a unified German state, Nietzsche was a bit of a wreck thinking about all the ways this exercise in German nationalism could go terribly awry. His musings on the role history should play in audacious political times are particularly apt in today’s “historical fever.”

Nietzsche argues that the fundamental purpose of history should be for life. And as we live, we must understand our past without becoming enslaved to it. To underscore the importance of living in the present, he describes with envy the “unhistorical” beast, grazing among a herd in a valley with finite horizons on all sides, living in an eternal state of forgetfulness. In contrast to the human, ever-burdened by the past, the honest beast lives blissfully, as a child does, freeing the mind to think and achieve great things. “The person who cannot set himself down on the crest of the moment, forgetting everything from the past, who is not capable of standing on a single point, like a goddess of victory, without dizziness or fear, will never know what happiness is. … And no artist would achieve his picture, no field marshal his victory, and no people its freedom, without previously having desired and striven for them in that sort of unhistorical condition.”

The opposite of the unhistorical mind is the superhistorical being, one who takes history much too seriously and thus feels little point to living in the present. In between these two minds are the more even-minded and optimistic historical beings — those who use history to serve the living. They look to the past with reverence to understand the present and to frame a vision for the future.

Nietzsche then goes on to describe the three approaches to history: Monumentalism, Antiquarianism and Criticism. No single approach is the right one; each can be used in combination and at an appropriate time and context. If misused, however, “destructive weeds” will sprout and pull society down into chaos.

The Monumentalists are on an historical search for glory. This can be a dangerous exercise, for if the past is viewed as something that can be imitated and reinterpreted into something more beautiful, then it easily can fall into a trap of “free poeticizing” by people serving up mythic fictions to “weakly cultured nations” craving hope and direction. In a prophetic peering into the Third Reich, Nietzsche warns that the Monumentalists are most dangerous as superhistorical people when they are not anchored to a particular place. When saturated in a myth of cultural superiority and lacking in geopolitical boundaries, “less favored races and people” roam around, “looking for something better in foreign places,” and competition and warfare ensures. While such thinking in the past has fueled foreign adventurism and destructive wars, the Monumentalists today are more concerned about a nativist agenda on their home turf. Chants by the alt-right like “our blood, our soil” and campaigns against “cultural Marxism” taking over the world stem from a stubbornly anchored place and people who believe their white, European-derived race is being diluted by “the other,” who belong on the other side of the fence.

The Antiquarian, like the Monumentalist, tends to look at history through rose-colored glasses, but wants to preserve the past in a traditionalist, literalist sense rather than use history to generate life. “Man envelopes himself in a moldy smell” and steeps himself so deeply in the past that he will take little interest in what lies beyond the horizon. The modern jihadist drawn to the Islamic State banner can be seen through this lens, believing that a return to a seventh-century Islamic way way of life will restore virtue in man and glory to the Islamic world.

The third approach to history that Nietzsche describes is the critical one. He writes that a person must have the power to break with the past in order to live. This, he argues, can be done by “dragging the past before a court of justice” to look at history with a critical eye. In describing a “first and second nature,” he describes how a generation that looks at its past and can recognize its ills alongside its virtues sets the stage for the next generation to study its past with a healthier, more critical view of history, and thus society is better off in the long run. In this thought, Nietzsche may have been a tad idealistic. In reality, as we can see today, several decades is long enough to wear down the critical eye and blur our historical memory for the worse.

The Limitations of the Critical Approach

The critical method may appear like the most pragmatic and reasoned approach to history, but here, too, we must be careful. To make the point that we can never fully internalize the time, place and conditions of our past to perfectly understand it, Nietzsche dramatically asserts that “objectivity and justice have nothing to do with each other.” One can “interpret the past only on the basis of the highest power of the present.”

This lesson in critical history is an important one for the modern-day globalist fighting to extinguish resurgent flames of nationalism. While the 20th century horrors of unhinged nationalism need to be represented in starkly honest terms to prevent a repeat of the past, it is just as important to remember the economic, social and security conditions that give rise to those ideological currents in the first place. Nationalism is a natural product of the human condition and need not be blanketly vilified in all forms. While some German integrationists want to remain committed to a docile existence in the European Union, German students may tire of history books that overly fixate on the catastrophe of the Third Reich. While the message “Never forget!” matters, there comes a time when rational people looking for purpose and seeing problems with the current order want a fuller historical understanding of their past to comprehend who they are and where they come from instead of drowning themselves in guilt.

Nietzsche also warns against taking science and a purely empirical approach to life too far. The German thinker, best known for the declaration “God is dead,” was of course speaking at a time in European history when rationalism and scientific thought were celebrated by philosophers as the great escape from religion’s straitjacket. The nuance to Nietzsche’s argument is often lost, however. Nietzsche himself was an atheist, but he warned that if we went too far down the critical path and didn’t leave any room for the Antiquarian memory, then we would strip society of religion, art and other enigmatic instincts that humans need to make sense of the inexplicable. As he put it, “all living things need an atmosphere around them, a secret circle of darkness” or else European culture would face a catastrophe in suffering the perils of nihilism. If Nietzsche were alive today, he would probably argue that overzealous technologists intent on erasing borders in an ever-globalizing world were setting it up for a violent clash.

Nietzsche also would see the jumbled historical references feeding into today’s political discourse as a gross abuse of history warning of much bigger problems ahead. In every camp of Monumentalists and superhistorians, there are some whose egos and visions are so big that they believe that the entire passage of history is to serve their modern agenda. Nietzsche saw this type in his day as well:

“Arrogant European of the nineteenth century, you are raving! Your knowledge does not complete nature, but only kills your own. For once, measure your height as a knower against your depth as a person who can do something. Of course, you clamber on the solar ray of knowledge upward towards heaven, but you also climb downward to chaos.”

In fact, chaos is exactly what many modern-day radical Monumentalists are seeking. If one assumes an apocalyptic view of the world, as many among the alt-right and some within a rapidly thinning camp of ultranationalists in the White House have openly espoused, then their energy and focus will be on tearing down the current order at whatever cost to energize the masses to engage in their so-called revolution. To complete this aim, enemies need to be invented, the intelligentsia needs to be condemned and history needs to be revised. And whether they know it or not, the motto of the modern-day Monumentalist, in Nietzsche’s words, will be the following: “Let the dead bury the living.”