Germany is heading into the final weeks of a fairly uneventful campaign season. There is little chance of a major nationalist or Euroskeptic victory, and opinion polls have remained steady. Although the runup to the Sept. 24 election has been relatively quiet, major repercussions, both domestic and international, could follow in its wake. The big question — both for Germans and fellow members of the European Union — is what form the final distribution of seats in the Bundestag, Germany’s lower house of parliament, will take. The answer will determine not only the possible combination of parties that will form a German government coalition, but also shape the direction that much-needed reforms to the European bloc will take.

For the past four years, Germany has been governed by a ruling coalition made up of the country’s two largest parties: the conservative Christian Democratic Union (CDU), led by Chancellor Angela Merkel, and the progressive Social Democratic Party (SPD), led by former EU Parliament President Martin Schulz. Though the two parties have been able to work together, their policies and outlook differ, and neither is eager to find itself in the same coalition after the dust of the national election settles. The CDU and SPD will both be looking to form agreements with the country’s smaller political parties — four of which are in close competition to be the third-most-powerful party in Germany: the pro-business Free Democratic Party (FDP); the environmentalist The Greens; the left-wing The Left; and the Euroskeptic Alternative for Germany (AfD). If the most recent opinion polls true and all four earn enough votes to enter the legislature, Germany would face its most fragmented parliament in decades. 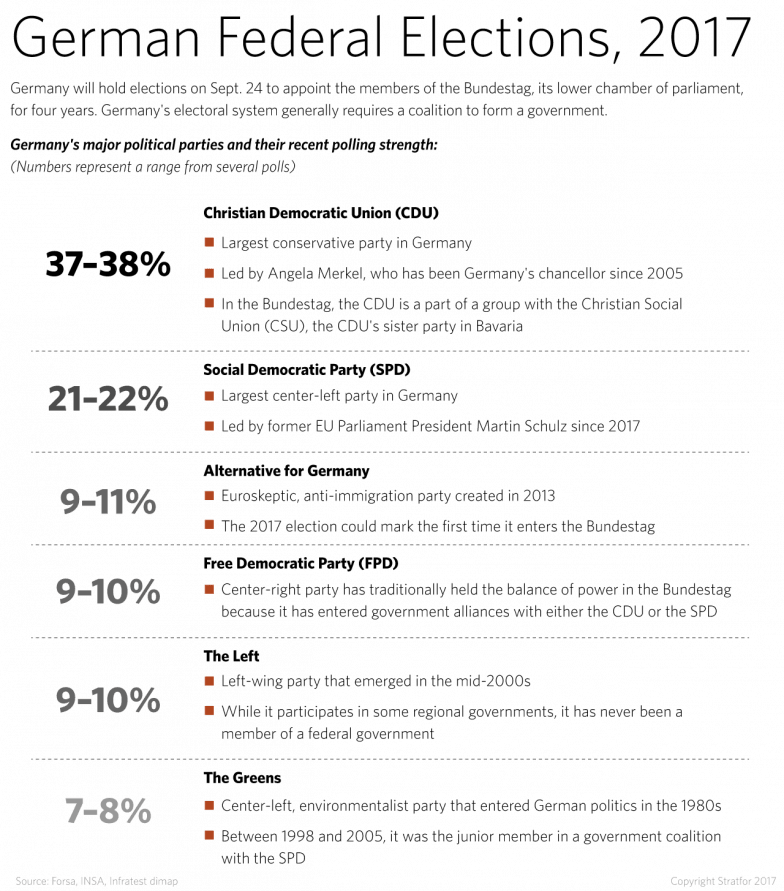 Based on previous postelection negotiations, which lasted a month in 2009 and three months in 2013, German policymakers could again take months to settle on a new government. In the meantime, the country would operate under a caretaker government as the parties hammer out functional alliances. And though the CDU and SPD are angling to avoid a repeat of their current coalition paring, it remains a possibility. Another option, if the newly elected parliament struggles to coalesce, would be the formation of a minority government, in which one party governs alone, supported by other parties on a case-by-case basis. Given Germany’s consensus-driven political environment, this would be an unusual step, but it is not out the question.

What’s at Stake for Europe

In Germany, unlike in recent French and Dutch elections, there is little risk that the government will include nationalist or Euroskeptic forces. The AfD likely will win a handful of seats in the Bundestag, but other parties for the most part will refuse to cooperate with it. Meanwhile, The Left will also struggle to find partners, though it could possibly become a member of a broad center-left alliance. But while the German election doesn’t pose the same threat to the stability of the eurozone as did the French or Dutch elections, the next German government’s composition will play an important role in determining the future of the European Union.

Over the past decade, a combination of economic crises and strong nationalist sentiments made institutional reform in the European Union impossible. Now that most member states are growing again, and as the 2017 electoral season is reaching its end, the political environment for reform has become more favorable. Furthermore, last year’s Brexit referendum convinced most EU members and institutions that reforms are necessary to revitalize the bloc after years of shocks.

As the biggest economy in Europe, Germany will play a significant role in EU reform negotiations. Thus, the ideological composition of its government will be a crucial piece of the reform puzzle. In recent weeks, France, Italy and Spain each have made reform proposals, including plans to increase blocwide investment and introduce risk-sharing measures in the eurozone. Italy and Spain have even proposed issuing debt that is jointly backed by all the members of the eurozone. Meanwhile, France said that it will hold off on additional proposals for the eurozone until after the German election, so that Paris and Berlin can discuss the plans together.

The makeup of the next coalition in Berlin will also influence debates on a variety of other EU issues. For example, Germany falls well short of NATO’s goal that its members spend at least 2 percent of gross domestic product on defense, and the CDU is more willing to increase military spending than the SPD. When it comes to Brexit, most German parties align on a few things: they are in favor of reaching a deal with the United Kingdom, and they agree that the bloc’s future relationship with London should include fewer benefits than EU membership would have granted. However, London would prefer a CDU-led government to one led by the SPD, given Schulz’s background as former EU Parliament president and his strong defense of the bloc and its institutions.

And it’s not just the two big parties that will affect continental affairs. Depending on the Cabinet positions they are given, junior coalition partners could also shape some of Berlin’s decisions. The FDP, for example, would probably resist the kinds of protectionist moves that France is proposing, while The Left would push for strong government spending and higher taxes for corporations. These parties’ abilities to shape policy will of course be limited, but they should not be completely disregarded.

Beyond the larger concerns of the European Union, Germany is also facing a number of long-term domestic challenges. And while discussion of those issues has been largely absent in the electoral campaign so far, the country will eventually to have reckon with them.

The German economy has grown at a decent pace in recent years, and unemployment is at record lows. However, as a member of the eurozone, Germany could still be harmed by developments in other countries. For example, the bailout program that helped Greece stabilize its economy is set to expire in mid-2018, and Athens likely will request help to reduce the burden of its sovereign debt. This idea is controversial in Germany, and the FDP has even suggested that Greece leave the eurozone in exchange for debt relief. The Italian general election in early 2018 offers further challenges. There is a real chance that Italian votes will put a euroskeptic government in power, which would create a major roadblock to eurozone reforms. 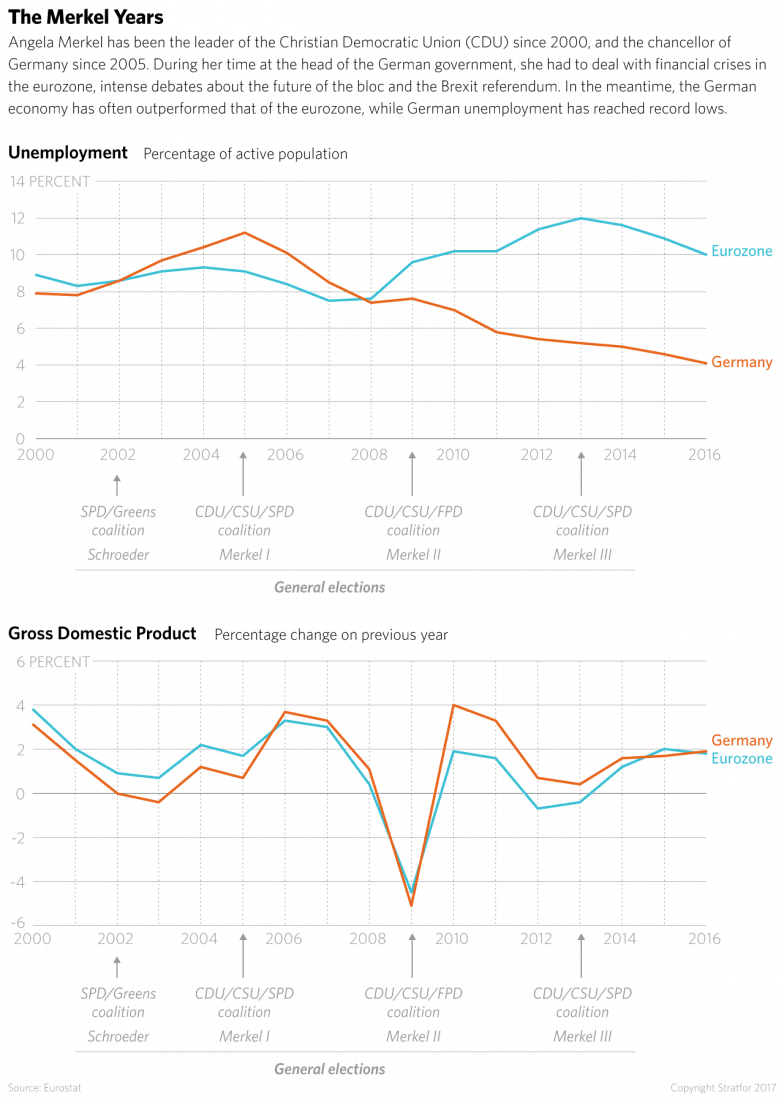 Germany’s stability also could take hits for reasons more within its control, as the country’s export-driven economy faces pressure from its main trade partners. Southern European countries want Berlin to increase domestic spending to boost imports, and the United States has repeatedly criticized Germany’s massive trade surplus. A more protectionist stance by the United States, Germany’s main trade partner outside the eurozone, could damage German exports. Moreover, Germany’s flagship industry — its automotive sector — may need to readapt its business model as it faces competition from new technologies and foreign vehicle manufacturers as well as the aftermath of the “dieselgate” emissions test-rigging scandal.

Finally, Germany faces two complex demographic challenges. The first is that its society is becoming more diverse, due to migration from other EU countries and specifically the recent influx of asylum seekers from the Middle East. This surge in immigration has in turn led to the emergence of nationalist and anti-immigration groups, and though they aren’t as strong as those in other countries like France, they are a growing concern. The second challenge is the country’s low fertility rates and high life expectancy. The German population will become older and potentially smaller in the coming decades, putting extra pressure on Germany’s health care and pension systems and also possibly causing a labor shortage.

The pressing issues surrounding the Sept. 24 elections will be primarily related to the makeup of the ruling coalition and how that coalition will handle the impending reforms to the European Union. But slippery economic and demographic issues will not disappear, and no matter which party leads the country for the next four years, it will eventually have to face these challenges.