By Matthew Bey – Re-Blogged From https://worldview.stratfor.com

China is in a bind. The heavy industry that propelled the country’s economy through three decades of dizzying growth has reached its limits. To escape the dreaded middle-income trap, China will need to shift its focus from low-end manufacturing to other economic industries, namely the technology sector. Beijing has put tech at the center of its long-term economic strategy through campaigns such as Made in China 2025 and Internet Plus. But these initiatives alone won’t push the Chinese economy past its current plateau. The tech sector is notorious for relentless innovation. And innovation requires flexibility.

For the Chinese government, flexibility is an unsettling prospect. Giving tech companies the leeway they need to keep up with — and, ideally, get ahead of — their competition is the only way Beijing can achieve its goals for economic growth and development. However, granting tech firms and their influential leaders the autonomy required to compete on the global stage could undermine the central government’s power over the economy and set an uncomfortable precedent for the rest of China’s industries. Faced with the seemingly incompatible tasks of promoting innovation and maintaining control over the economy, the Communist Party of China is struggling to figure out how to regulate the tech sector without stifling it.

China’s economy has come a long way during the past 30 years. In addition to the giant state-owned enterprises for which the country is famous, or perhaps infamous, a growing number of private companies operate in China today. Companies that are at least partly private, in fact, dominate the Chinese tech sector, though many of the firms still have deep political and financial ties to the government. Beijing’s level of involvement and influence varies from company to company, often in inverse proportion to a firm’s capabilities.

Many of the most capable and effective technology companies in China are variable interest entities, private firms that have managed to skirt regulations prohibiting foreign investment and list their stock overseas. By following the so-called Sina model — named for the telecommunications company that first exploited the regulatory loophole — China’s most successful technology firms have secured the funding and resources they need to get ahead. Listing their shares abroad not only offers tech companies opportunities for financing beyond the Chinese system, which Beijing often uses to influence private firms, but it also gives them greater access to foreign talent and expertise. That said, the companies that have followed this pattern, such as Alibaba Group, Baidu Inc., Tencent Holdings Ltd. and, of course, the namesake Sina Corp., had already established themselves on the Chinese market before setting off overseas.

Beyond the handful of giants at the top of Chinese tech, the rest of the sector is wildly diverse. The vast majority of the country’s small firms lack the financing and flexibility to hold their own outside tech hubs such as Shenzhen. Perhaps the most prominent exception is Huawei Technologies Co. Ltd., founded 30 years ago by Ren Zhengfei. The company has made a name for itself not by courting investment abroad but through its sheer performance, which, coupled with China’s steadily growing research and development budget, enabled it to attract world-class engineers. Today, it is one of the country’s most proficient tech companies. Most state-owned enterprises, by contrast, have struggled to make their mark in the tech sector, regardless of whether a central, provincial or local authority operates them. 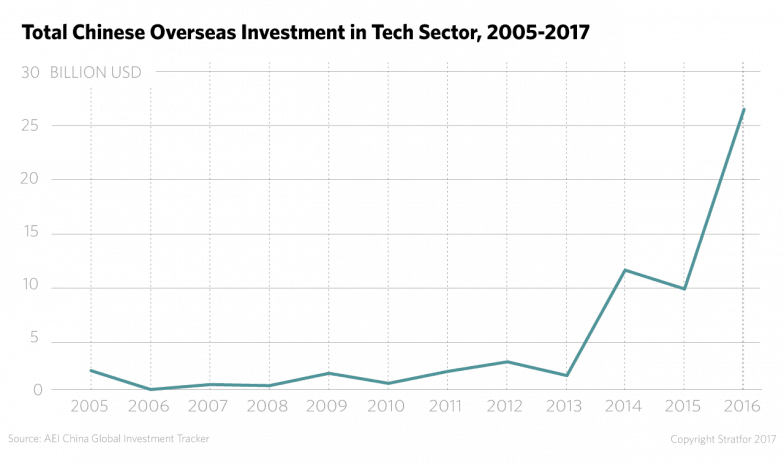 With such a variety of companies in the field, China’s tech sector has become highly competitive. The largest firms — much like their U.S. counterparts, Google, Apple Inc. or Amazon — have to adapt continuously to stay on top of their competition. In the process, they have become leaders in innovation. Huawei Technologies, for example, started its own semiconductor subsidiary to distinguish itself from other Chinese smartphone manufacturers, many of which rely on foreign suppliers for their circuits. And Alibaba ranked seventh among the world’s most innovative companies in a recent KPMG survey, beating even Samsung Electronics.

All the while, Beijing has used a combination of incentive structures and informal ties to the industry to guide, rather than command, the tech sector. By giving or withholding procurement contract opportunities, tax breaks and access to state investment funds, financial institutions and subsidies, the central government tries to steer the sector as a whole, even if it doesn’t directly control the individual companies. Its primary aim in this endeavor is to preserve the social order and to keep possible threats to stability, such as unemployment or inequality, at bay. If a company goes against its policies, Beijing isn’t too concerned because it can always intercede should the need arise to prevent bankruptcy or layoffs from jeopardizing the stability it prizes. If, however, a company comes to dominate a certain sector, China’s central government starts to worry. A firm that strong, after all, is harder to control with the same old incentives and could brush up against or even break the bounds that Beijing has set for businesses operating in the country. And if left unchecked, it could gain enough financial clout to challenge the current political system.

As China’s tech giants have become more powerful,  the variable interest entity model has come under greater scrutiny. The system has been a point of contention for China’s leaders since Sina first used it back in 2000, but closing the loophole behind it is easier said than done. Because so many of China’s most lucrative companies rely on the Sina model, cracking down on its use would invite serious social and economic repercussions. In fact, nearly three years after China’s Finance Ministry proposed legislation to ban the practice for new companies, Beijing has instead opened up more sectors to direct foreign investment.

The Ties That Bind

But the failed legislation is only one part of Beijing’s efforts to reassert control over the tech sector. China has also tried to give the Communist Party a stronger role in private business. As it is, every Chinese company with more than 50 employees is required to have a Communist Party secretary, and many executives in the country’s biggest tech firms have established themselves in China’s political sphere as well. (To be fair, though, several of China’s most prominent entrepreneurs reached the top of their industries because of their political connections.) Baidu, Tencent and consumer electronics company Xiaomi Inc., for example, all have members of parliament among their employees. Furthermore, a growing number of private Chinese companies are drafting their charters to give the Party a formal role in their operations. Beijing has created a system in which Chinese firms have a vested interest in the Communist Party’s future.

Besides politics, several tech companies are also heavily involved in the country’s military and strategic industries. Baidu, for instance, has a long-standing relationship with China’s security, intelligence and military apparatuses. These companies understand that going against the Chinese government’s wishes would jeopardize their business ties with Beijing, while also potentially getting them blacklisted on the domestic market, depriving them of valuable contracts and putting their executives in legal trouble. Even so, outside the country, many Chinese companies are trying to distance themselves from the government. As the country’s foreign technology investments draw scrutiny from Western governments, many private firms are trying to downplay their connections to Beijing. The companies will try to keep the central government at arm’s length, at least in their activities overseas, as they look for new opportunities to increase their market share abroad.

The tech sector’s success is a double-edged sword for Beijing. On the one hand, its companies’ continued competitiveness is crucial to the country’s economic growth. On the other, the stronger the firms become, the greater their threat to the Communist Party’s authority will be. Beijing’s interests align with those of the tech sector for the time being, but that won’t always be the case. Between now and then, the central government will need to find a way to reconcile its need to control private industry with its need for innovation in technology.