Skip to content
HomeWhen the Protests Die Down, Iran’s Economic Problems Will Live On

After a week of public protests, the dust is starting to settle in Iran. Without clear leadership or a specific political movement for protesters to gather around, the intensity of the demonstrations that popped up around the country has begun to dissipate. But that doesn’t mean the government in Tehran can breathe easy. The economic grievances that sparked the initial unrest are still alive and well among the Iranian public, and many of them are beyond the power of the current administration to fix. Furthermore, the work required to address the issues that are within the government’s control risks upsetting the delicate balance of Iranian politics.

One driver of the protests that may well inspire future episodes of unrest is the disappointment many Iranians feel about the Joint Comprehensive Plan of Action (JCPOA). When the deal over Iran’s nuclear development entered effect in January 2016, hopes were high among the country’s citizens that it would improve their economic circumstances. But while the JCPOA has helped some macroeconomic indicators, such as gross domestic product, its effects have yet to reach Iran’s lower, working and middle classes. Part of the problem is that Islamic republic is still under a complicated sanctions regime unrelated to the nuclear deal. U.S. restrictions on trade in dollars, for example, have made it difficult for Iranian banks to secure investments and do business with large financial institutions abroad. (The conditions of the JCPOA have, however, enabled Iranian banks to work with small and medium-sized banks in Asia, Europe and the Middle East and allowed the country’s banking system back into the international SWIFT network.) Given the current U.S. administration’s sharp opposition to the Iranian government, the sanctions are more likely to increase over the next year than they are to abate.

The JCPOA’s failure to meet the Iranian public’s expectations is just one of the problems beyond Tehran’s control. Lackluster oil prices are another. Although the oil and natural gas sector accounts for only 20 percent of GDP in Iran’s diversified economy, it provides more than three-quarters of government revenue. The Islamic republic’s energy production has steadily increased since the JCPOA — which lifted secondary sanctions on the country’s energy industry — bringing government revenue up with it. Yet by the middle of last year, proceeds from oil and natural gas production were 35 percent shy of Tehran’s original projections for the first six months of 2017. Global oil prices just haven’t kept pace with the swift recovery in Iran’s energy production.

What’s more, the government has not spent its extra energy income as the public had hoped it would. During the recent protests, demonstrators vented over Iran’s expenditures on military campaigns abroad. Citizens and media outlets also have accused the government of neglecting development projects at home, particularly in underdeveloped and minority-heavy provinces such as Kermanshah and Khuzestan. A massive earthquake in November damaged poorly built structures in Kermanshah, an economically depressed area with a predominantly Kurdish population, despite President Hassan Rouhani’s repeated promises over the past two years to send development funds to the province. In addition, allegations of rampant corruption in the administration have circulated widely in the media.

The government, meanwhile, is pointing the finger elsewhere. Rouhani’s administration frequently blames Iran’s economic ills on sanctions, tax evasion — which costs Tehran an estimated $7.7 billion annually — and corruption among its political foes. These factors, however, are outside the scope of everyday life for most Iranians and have no connection to the persistent problems that much of the public deals with on a daily basis.

Among the economic issues weighing most heavily on average Iranians are the cost of goods and the strength of the country’s currency, the rial. Both concerns have figured prominently in the latest round of protests. Since it relies on imports for most of its food supply, Iran often struggles to keep food prices steady. A recent price hike for staple products such as eggs provoked outrage in the country, recalling the 2012 demonstrations that erupted when the cost of bread and poultry rose. The fluctuation in food prices is all the more distressing for Iranians because of their declining purchasing power. Though the rate of change in inflation has stabilized since Rouhani took office in 2013 and become even less volatile since the nuclear deal took effect, successive economic reforms, including changes to Iran’s subsidy and cash handout programs, have left Iranian citizens with less to spend. An economic plan that predated his administration legally bound Rouhani to go through with the unpopular subsidy reforms, but the recent turmoil

will probably stall any changes to the cash handout program this year. 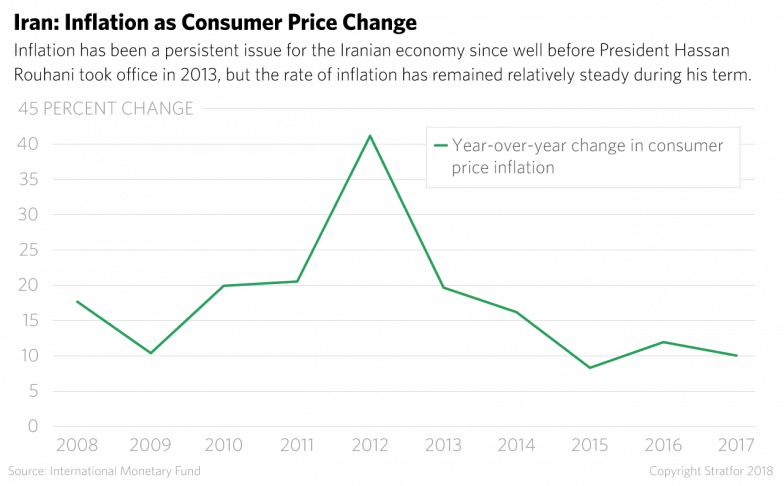 Complaints of unemployment and underemployment, likewise, have been a common refrain among protesters over the past week. Unemployment is a serious issue in Iran, mainly in urban centers such as Tehran. Underemployment, on the other hand, is a more widespread problem. Relative to other Middle Eastern states with comparable regional stature, such as Saudi Arabia, Turkey or Egypt, Iran has a highly educated population and excels in the STEM fields — science, technology, engineering and mathematics. But the Islamic republic doesn’t have enough suitable jobs to meet the qualifications of its workforce. Many business owners in the private sector blame the government for the gap, arguing that corruption, unpredictable policy changes, bureaucracy, access to financing and inflation keep them from hiring more people. 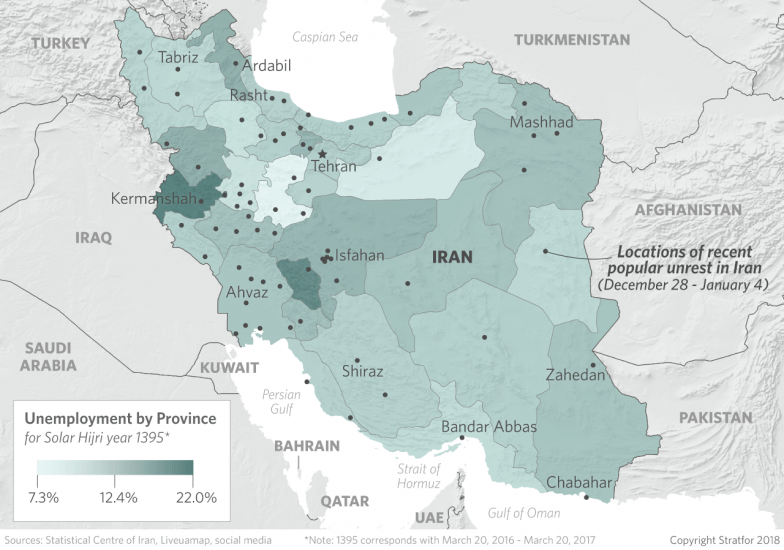 To resolve their country’s economic troubles, Iran’s leaders will have to take on several tough problems, some of which are beyond their ability to address. The rash of unrest has given Rouhani’s administration a sense of urgency in this endeavor, but the process will be neither quick nor easy. The reforms necessary to overhaul labor laws, subsidies and business contracts, moreover, are as political as they are economic, meaning that more demonstrations are bound to pop up along the way.