With the start of a new year, we once again examine the state of the global jihadist movement. Shared from Threat Lens, Stratfor’s unique protective intelligence product, the following column includes excerpts from a comprehensive forecast available to Threat Lens subscribers.

In some ways “the global jihadist movement” is a misleading phrase. Rather than the monolithic threat it describes, jihadism more closely resembles a worldwide insurgency with two competing standard-bearers: al Qaeda and the Islamic State. To make matters more complicated, grassroots extremists have been known to take inspiration from each group’s ideology — and, in some cases, both.

This complex network of international organizations, local militancies and individual adherents cannot be dismantled by simply killing its members and leaders one by one. Instead, governments around the globe will have to split off local groups from the Islamic State and al Qaeda ideologies they have chosen to adopt and tackle them separately using the principles of counterinsurgency if the jihadist movement is to be eradicated once and for all.

Last year was a tough one for the al Qaeda core:

Throughout 2017, the group tried to promote Hamza bin Laden — the son of Osama bin Laden — as its new figurehead. But while Hamza’s rhetoric seems to have found a receptive audience in the world of jihadism, it is unclear whether the warm welcome will translate into new recruits for his father’s cause.

Even so, the al Qaeda core and many of its franchises remain intact at the start of 2018, albeit under mounting strain. Al Qaeda in the Islamic Maghreb (AQIM), for instance, 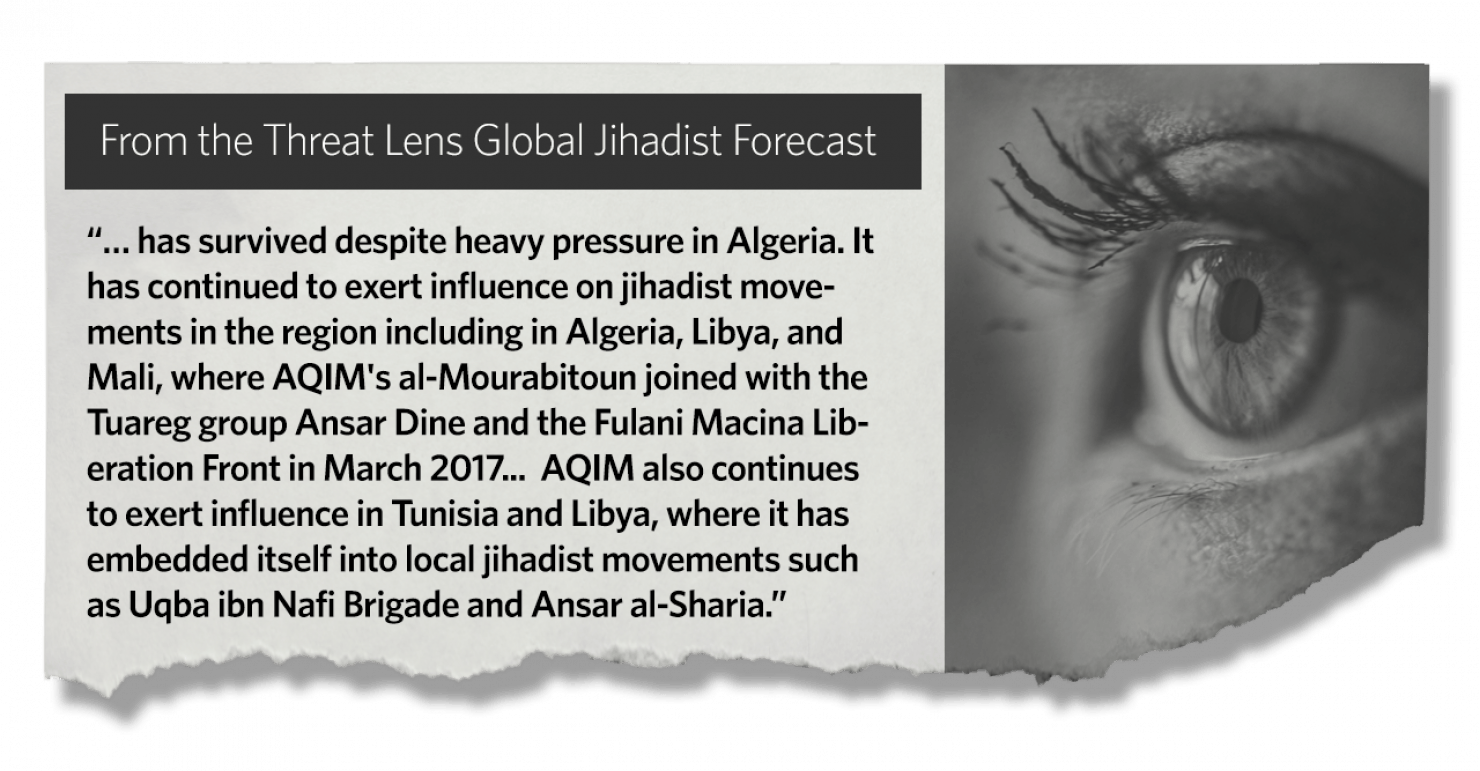 Al Qaeda’s offshoots in Egypt have made inroads among the locals as well, in part by criticizing their Islamic State rival in the area — Wilayat Sinai — for attacking civilians. (By contrast, Jund al-Islam and Ansar al-Islam tend to target Egyptian security forces.) The latter al Qaeda branch, led by former Egyptian special operations forces officer Hisham Ashmawy, is a particularly capable force. But Jund al-Islam has worked to earn the trust of Bedouin tribes in Sinai that have been appalled by Wilayat Sinai’s brutality; the group has even attacked some of the Islamic State affiliate’s fighters outright.

Some of al Qaeda’s partners throughout the Middle East and Africa had bigger problems to grapple with last year. Amid Yemen’s protracted civil war;

In much the same way, the United States cracked down on the positions of al Shabaab, al Qaeda’s Somali franchise.

Despite the renewed pressure brought to bear against them, these groups have maintained their allegiance to the al Qaeda core. The same may not be true of al Qaeda’s erstwhile ally on the Syrian battlefield, formerly known as Jabhat al-Nusra. The group now belongs to an umbrella organization called Hayat Tahrir al-Sham that advocates a nationalist agenda rather than al Qaeda’s transnationalist goals. 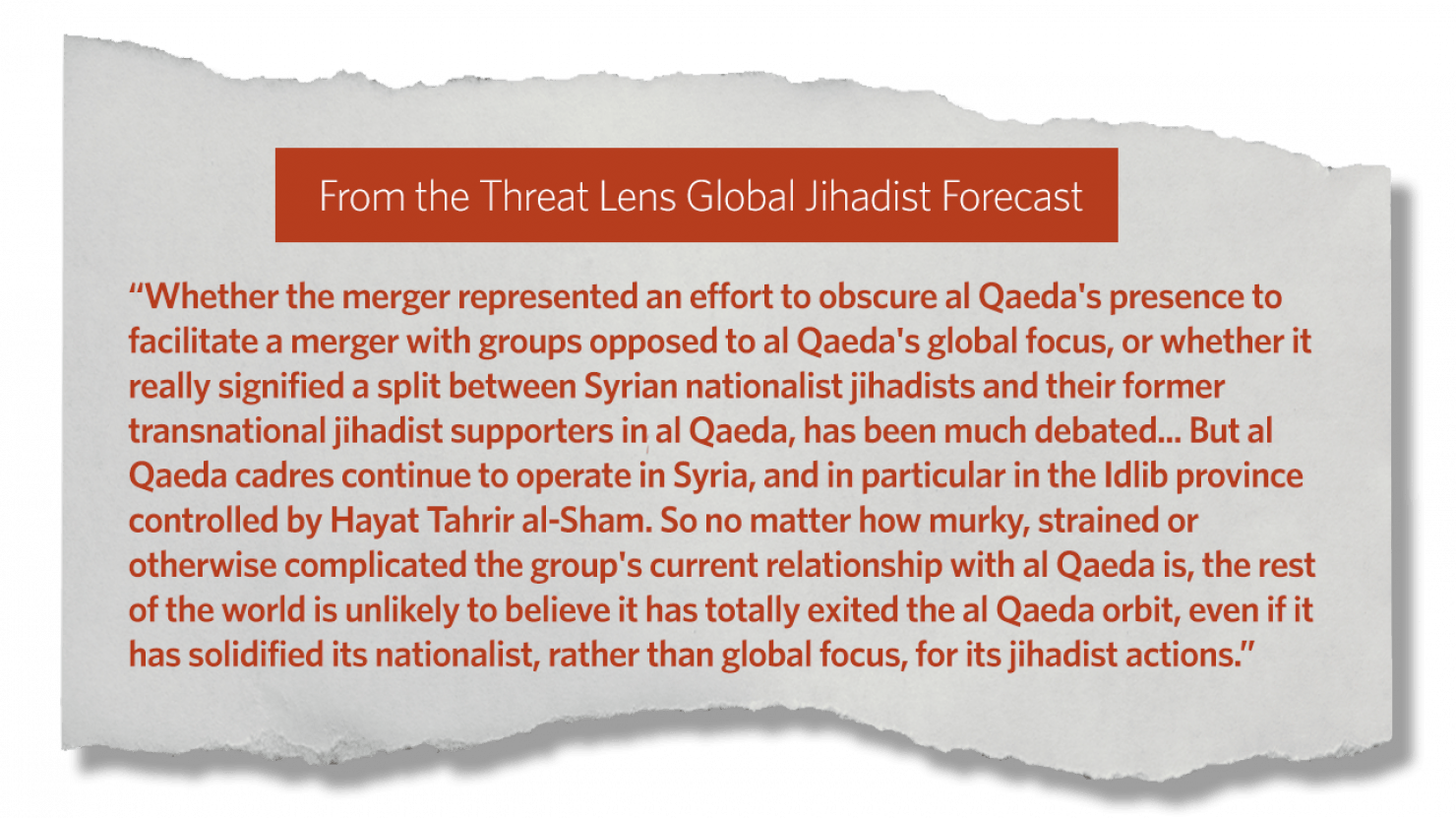 Either way, Jabhat al-Nusra’s decision to rebrand itself as a group with more interests at home than abroad will make it more difficult for al Qaeda to launch far-flung attacks from Syria this year.

Once the United States and its coalition partners started launching airstrikes against the Islamic State in Iraq and Syria in August 2014, the group was bound to lose its grip on the vast territory it had claimed. The so-called caliphate met its inevitable fate in 2017 as the Islamic State was beaten back from most of its strongholds in the region. 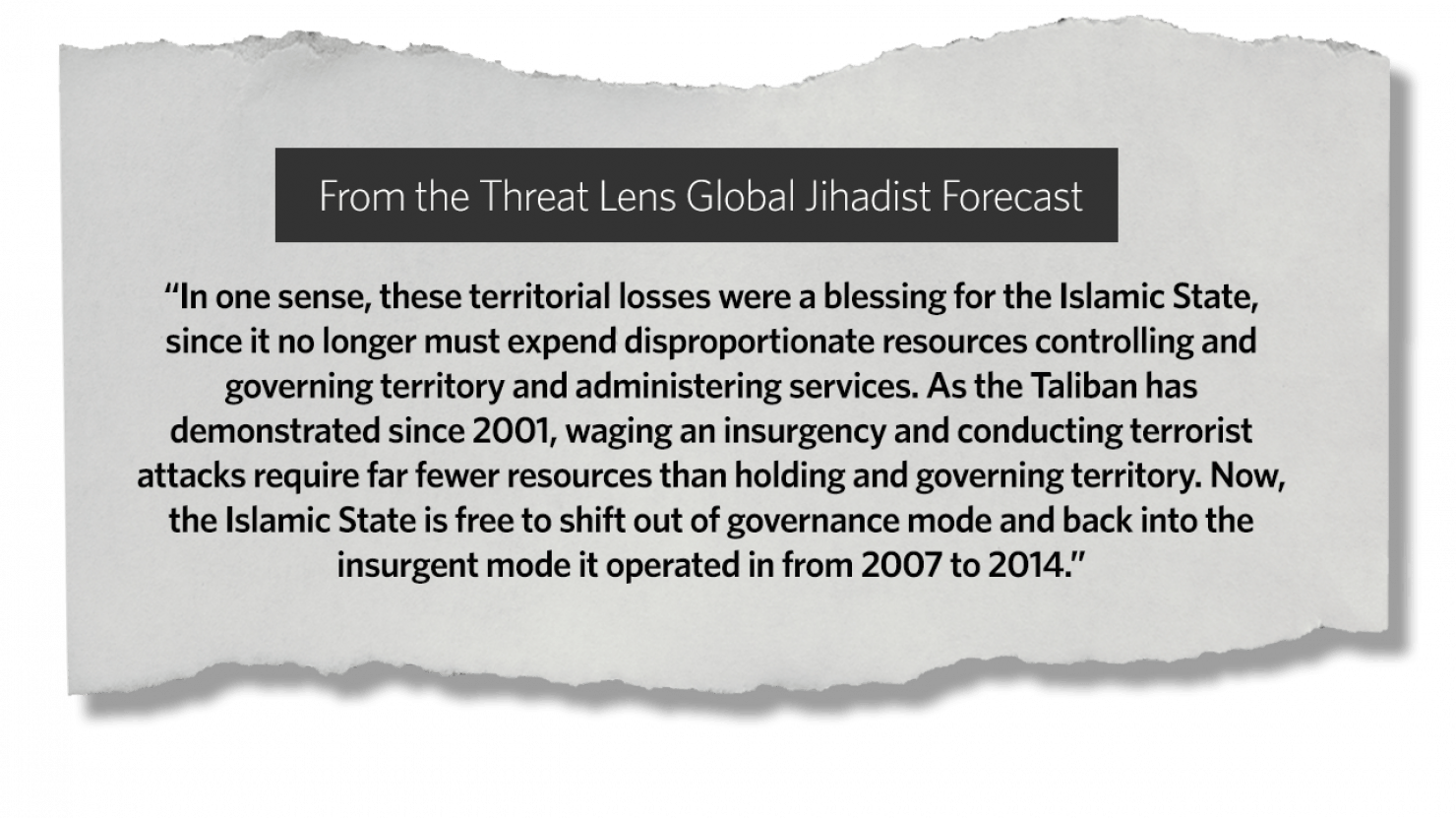 The Islamic State core may no longer function as an effective polity, but it still thrives as an insurgency and terrorist group. As a result, the Islamic State will keep planning and conducting attacks across Iraq and Syria over the coming year, in part to stoke ethnic and sectarian unrest.

The group’s foreign partners will follow suit as the Islamic State’s ideology continues to resonate around the globe. But like the central organization with which they have aligned, many of these branches have met stiff resistance in their traditional havens.

Among them is Wilayat al Sudan al Gharbi, the Islamic State’s Nigerian cell that is often better known by its former name, Boko Haram. The group has split into two factions with somewhat different means and ends: One led by Abubakr Shekau, whose use of women and children in suicide bombings has caused even the Islamic State to rebuke him, and one led by Abu Musab al-Barnawi, the son of Boko Haram’s founder. The first wing, though larger, has had to retreat from most of its holdings in northeastern Nigeria into the Sambisa Forest, where it now wages a deadly campaign of insurgent and terrorist attacks throughout the region. Meanwhile, the second wing has concentrated its operations in Lake Chad Basin, where it harries military and security forces.

We believe al-Barnawi’s faction would like to conduct attacks against Western interests in Nigeria, such as bombings or kidnappings.

To the north, Wilayat Barqa — the Islamic State’s Libyan offshoot and, at one point, its strongest franchise — has likewise sought shelter from the punishing advances of its enemies. 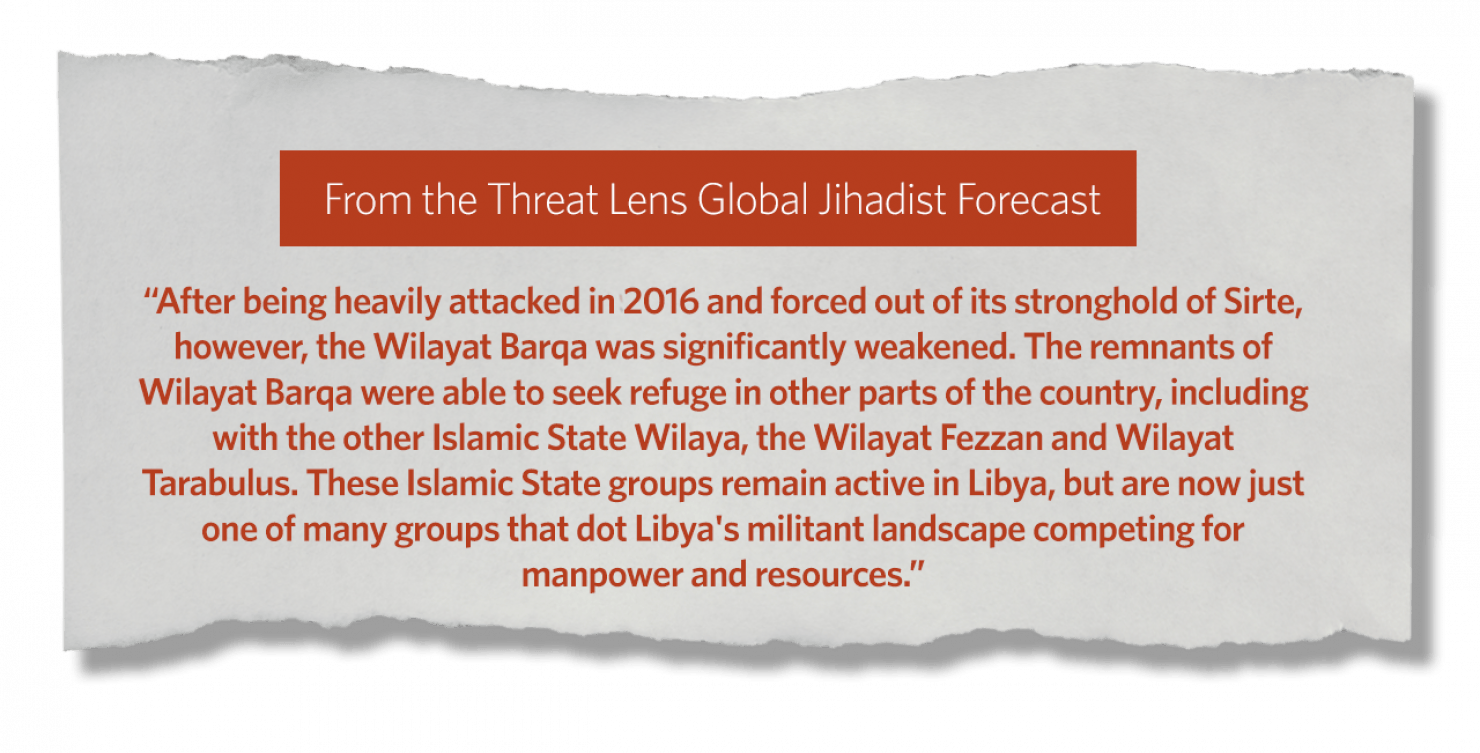 Next door, however, another Islamic State affiliate has risen to prominence as Wilayat Barqa has faded from view: Wilayat Sinai. Though the Egyptian group has lost much of its manpower since its peak in 2015, Wilayat Sinai may be the largest and most capable Islamic State branch left today. 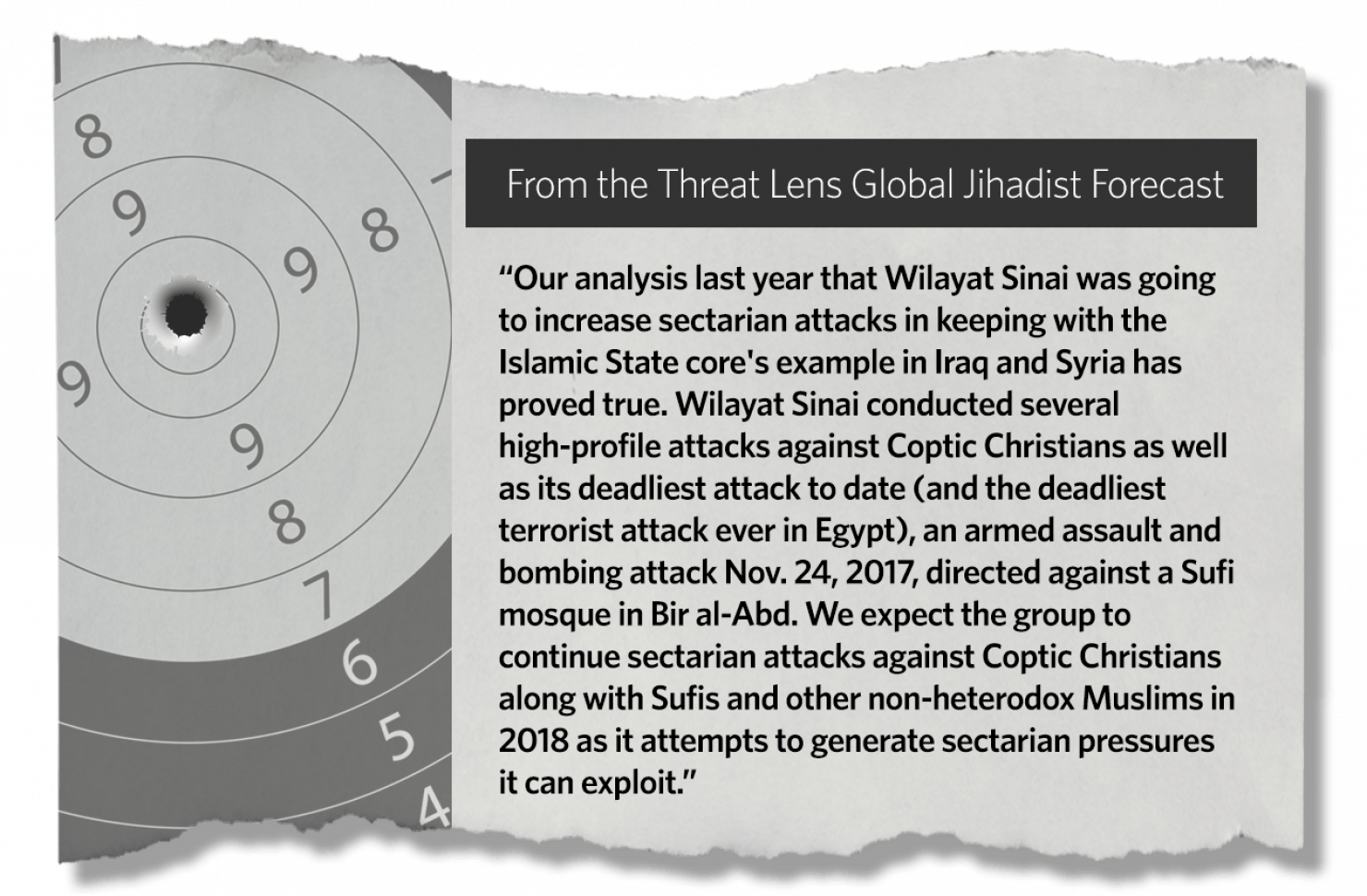 The Islamic State has fared better than we expected in Afghanistan and Pakistan as well. There the organization’s Khorasan chapter has shown an impressive resilience to operations against it by Afghan security forces, the Taliban and the United States. Rather than being crippled by these efforts, Khorasan remains able to launch raids against rural communities and suicide attacks against the Afghan capital of Kabul.

But the Islamic State’s most surprising success of 2017 was the capture of Marawi City in the southern Philippines. The group’s supporters defied our forecast by drawing hundreds of heavily armed fighters to their cause and trying to seize territory — just as the Islamic State had in Iraq and Syria.

Since 9/11, al Qaeda and the Islamic State have struggled to project their terrorist power beyond their core operating areas. Consequently, grassroots jihadists — rather than the trained professionals among the ranks of established jihadist groups — have been responsible for most of the terrorist attacks waged on the West in recent years. 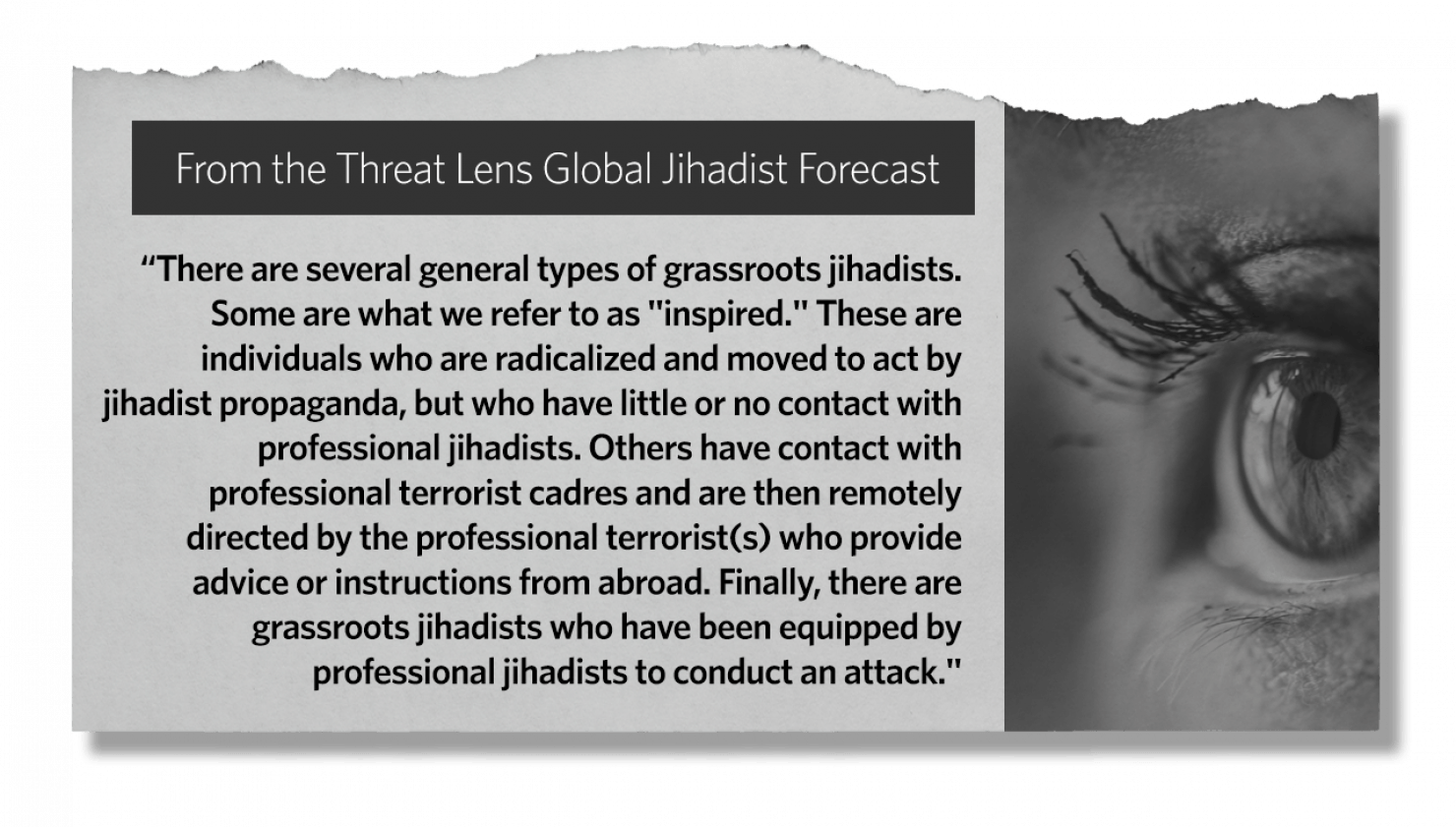 Inspired jihadists were responsible for the bulk of the terrorist attacks to hit the West last year. Even in operations involving cells of extremists, such as the London Bridge incident in June 2017 and a series of attacks in Barcelona in August, the perpetrators had no contact with and received no direction or equipment from their professional peers.

There were some noteworthy exceptions to this pattern, though. 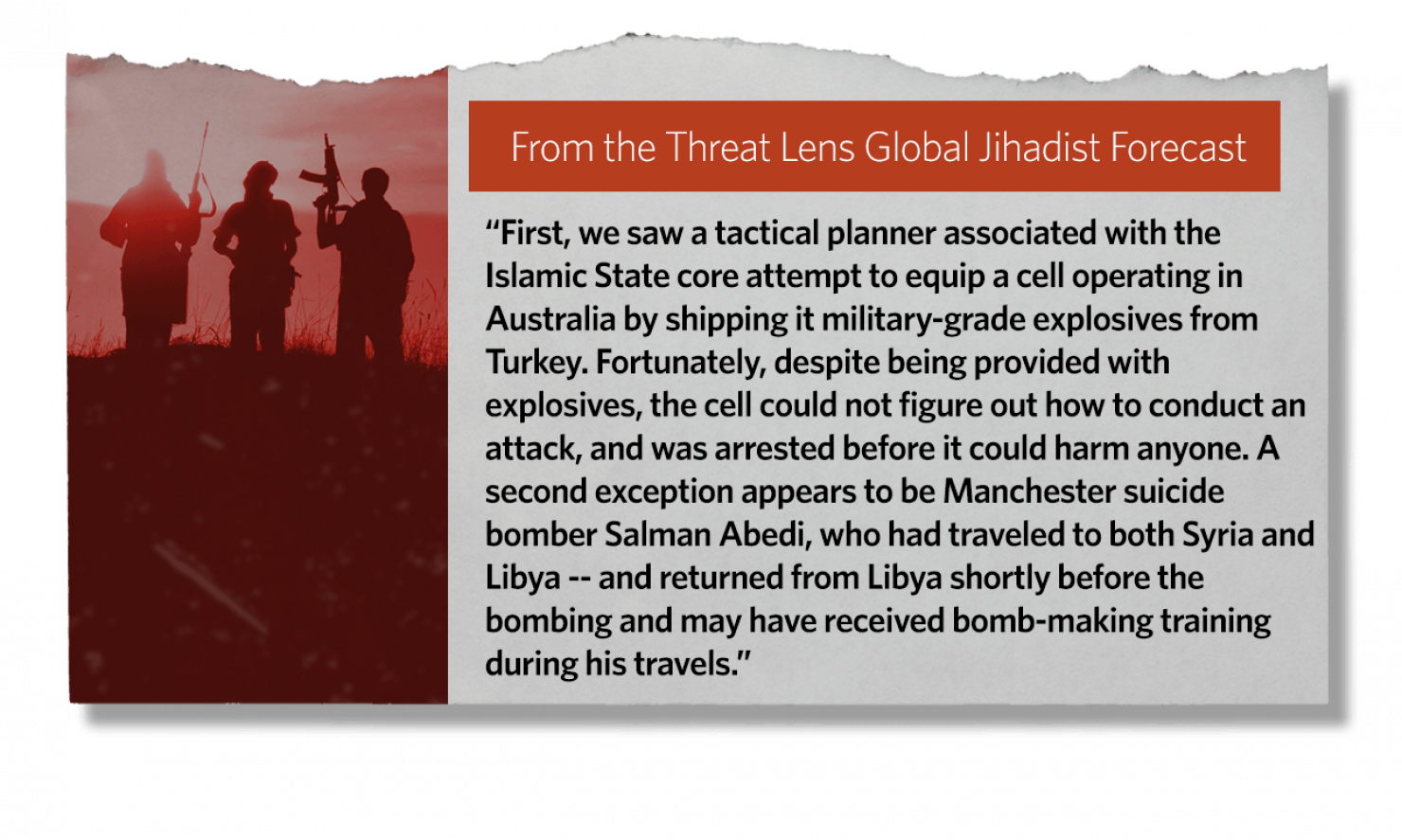 Grassroots jihadists may not boast the sophisticated terrorist tradecraft needed to launch spectacular attacks, but it would be unwise to dismiss the danger they pose. At the right place and the right time, an inexperienced terrorist can still wreak havoc, leaving devastation in his or her wake. That said, circumstances rarely align in grassroots jihadists’ favor — and certainly not as often as the groups calling them to action would like.