Summary: A new paper provides new information about hurricanes, one of the top natural disaster threats. It shatters the media’s narrative and illustrates how science works in the real world.

Science shapes our world, revealing secrets of nature that allow humanity to build a better world — more secure and prosperous. Yet the public has little understanding of how it works.

People believe myths, such as the cornucopia produced by basic science (gains come more often from focused research to achieve immediately useful goals). People believe scientists are logical beings, like Mr. Spock — instead of the fallible, passionate, pack animals that run other institutions. People believe new papers reveal TRUTH (what Andrew Revkin calls the “single study syndrome” (e.g., here and here). This leads to disillusionment when people look under the covers and see the battles for precedence and power, the petty personal rivalries, and the misuse of science for political gain.

One cure for this is reading books about science, such as those by Lewis Thomas

. Another is reading papers by scientists, seeing the exploration of reality using inadequate data and imperfect theories — with new insights usually gained inch by inch. This is the reality, not journalists’ daily declaration that our political biases are proven correct!

Here is an example: a new paper about the trend in hurricanes, among the most destructive of routine natural phenomena (not as bad as asteroid strikes or super volcanoes, but much more common). It is especially relevant as an alleged effect of our emissions of CO2.

Overview of the trends in hurricane action

There are many oddities in the long campaign to get public policy action to fight climate change. One is that we often forecast that the very serious future danger is the one we just experienced. Big damages in US from hurricanes in 2005 sparked headlines that an age of more and bigger hurricanes had begun. A 12 year long hurricane “drought” in the US followed. So that story went down the memory hole. Droughts in California and in Texas sparked headlines about the new age of droughts. Now after a year of destructive hurricanes in the US, headlines warn about a future of awful hurricanes.

Let’s look at the global trends, then the look at the latest science. The first graph is from the website of Roger Pielke Jr., an update of data from “Historical Global Tropical Cyclone Landfalls” by Jessica Weinkle in the Journal of Climate, July 2012. No significant trend, with a low frequency for 7 of the last 9 years. Dr. Ryan Maue has a graph of global tropical cyclone frequency (not just landfalls): same result.

For another perspective, here is Dr. Maue’s graph of Accumulated Cyclone Energy for the world and Northern Hemisphere (24 month running average). Again, no trend. As demographer Ben Wattenberg wrote in his 1984 book: The Good News Is the Bad News Is Wrong 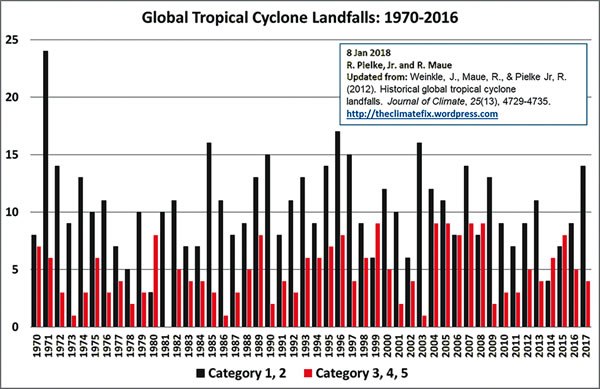 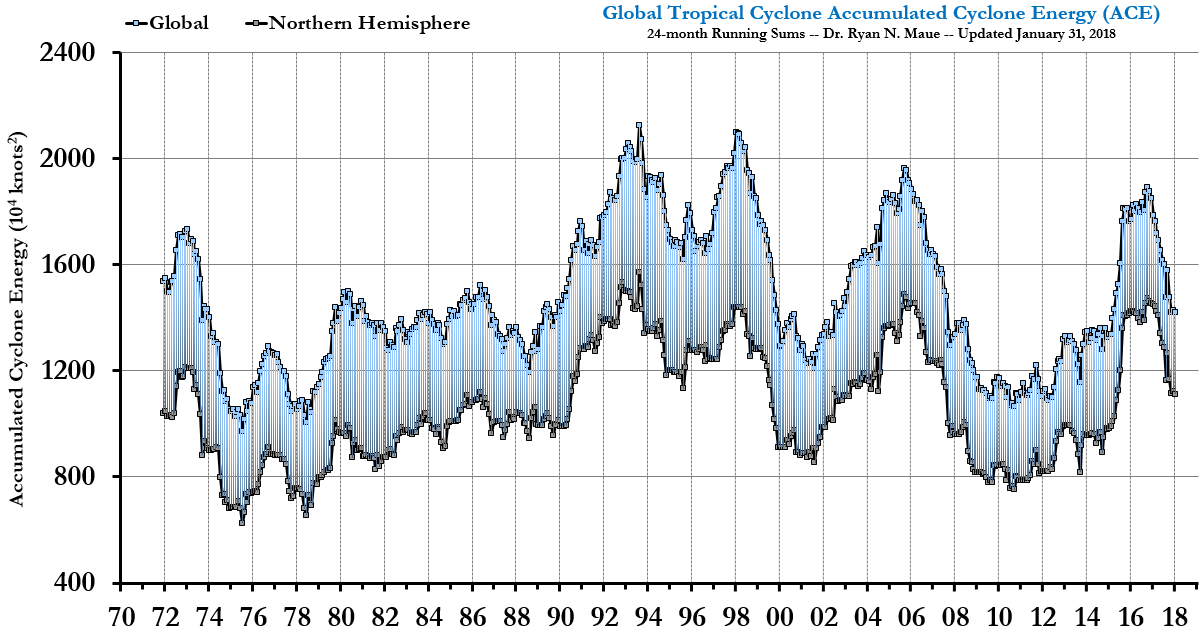 News about a new paper

“Their paper is a useful update, a synthesis of several threads of research providing context for the high damage losses from the 2017 hurricane season.”
— Dr. Judith Curry, CEO of Climate Forecast Applications Network. She writes at Climate Etc.

The abstract reveals findings that contradict the mainstream news narrative about hurricanes during 2017. It cites other studies with similar findings (all ignored by journalists — Roger Pielke Jr. has mentioned that some of this data got him labeled a “climate denier” by climate activists — details here). The conclusions are a clear example of focused research applied to questions important for America.

“Growth in coastal population and regional wealth are the overwhelming drivers of observed increases in hurricane-related damage. As the population and wealth of the US has increased in coastal locations, it has invariably led to the growth in exposure and vulnerability of coastal property along the US Gulf and East Coasts. Unfortunately, the risks associated with more people and vulnerable exposure came to fruition in Texas and Florida during the 2017 season following the landfalls of hurricanes Harvey and Irma. Total economic damage from those two storms exceeded $125 billion.

“Growth in coastal population and exposure is likely to continue in the future, and when hurricane landfalls do occur, this will likely lead to greater damage costs than previously seen. Such a statement is made recognizing that the vast scope of damage from hurricanes often highlight the effectiveness (or lack thereof) of building codes, flood maps, infrastructure, and insurance in at-risk communities.” {Red emphasis added.}

We are told that global warming makes hurricanes worse — some combination of more frequent and more intense (depending on the source). There is an easy first test of this. The world has been warming since the middle of the 19th century. The IPCC’s AR5 tells us that…

“It is extremely likely (95 – 100% certain) that human activities caused more than half of the observed increase in global mean surface temperature from 1951 to 2010.”

What is the trend in hurricane activity during the past 12 decades? One of the best records is that of landfalls on continental US. The authors show the data (graphs below; click to enlarge). The first graph shows all hurricane landfalls. The second shows landfalls of major hurricanes (Saffir-Simpson Category 3-5). These cause over 80% of all hurricane-related damages. Do you see any trend in either graph, in the “natural” era (1900-1950) or the anthropogenic era (1951-2017)? Klotzback has posted more detailed data back to 1851 about North Atlantic hurricanes. As to the future, only time will tell. 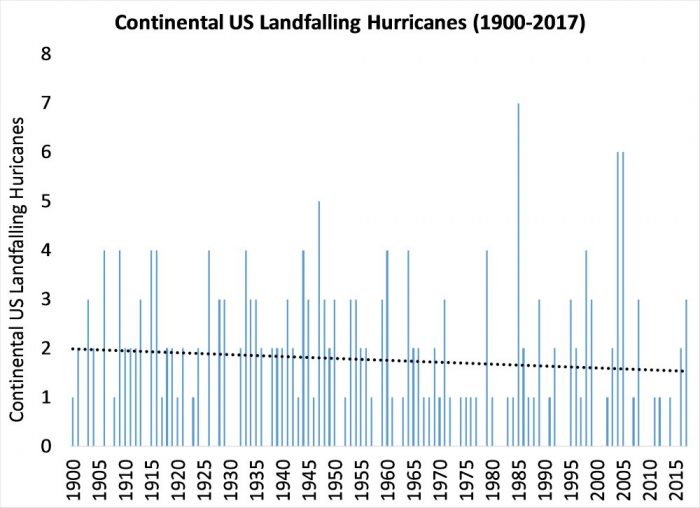 The bottom line: a warning.

“In the years since the last official decadal census in 2010, an even more pronounced trend of coastal growth has occurred as some of the greatest rates of population growth were found in particularly vulnerable hurricane landfall locations. Of the top 20 fastest-growing counties from 2010-2016, 13 were 281 in hurricane-prone states…

“Losses from future hurricanes have significant potential to dwarf those of the past based on societal change alone. Event losses will be even greater with potential increases in storm intensity (Knutson et al. 2010, Walsh et al. 2015) as well as flood-related impacts associated with an accelerated rate of sea level rise (Mousavi et al. 2011) and/or increased amounts of rainfall (Emanuel 2017). This highlights the continued importance of modernized and consistent building codes across hurricane-prone states, updated flood maps, and improved coastal/inland infrastructure given assumed impacts in the future.”

“We don’t even plan for the past.”
— Steven Mosher (of Berkeley Earth), a comment posted at Climate Etc.

Potential future increases in hurricane intensity, sea levels, and rainfall will increase damages from hurricanes. But our obsession with climate change blinds us to other sources of increasing weather-related risks. Such as increased population and economic development in areas exposed to hurricanes. And how our rotting public infrastructure increases our vulnerability to hurricane-related damage. The combination of these could have painful results. The public policy gridlock about climate change has left us unprepared for not just future risks but also the inevitable repeat of past weather.

This year the people of Puerto Rico and Texas paid for our folly. Population growth in hurricane-affected regions means that eventually the cost in blood and money will be even larger — unless we get smarter.