Skip to content
HomeSparks Fly Between Chile and Peru

Relations between Peru and Chile have historically been some of the most troubled in South America, but the past few years have brought a new energy to the relationship. On Feb. 6, Chilean Minister of Energy Andres Rebolledo confirmed that the two countries will begin construction this year on a 30-mile electricity transmission line connecting them. The line could be completed by the end of 2019. The announcement is a sign that both countries have decided to leave their historic animosity behind and that deeper integration between them will likely continue in the coming year.

Peru’s resentment toward Chile can be traced as far back as the War of the Pacific in the late 19th century, when Chile defeated both Bolivia and Peru. As a result, Peru lost part of its territory, and Bolivia became landlocked. The land Chile gained was rich in copper and silver. The loss of such important territory for both countries made it no surprise that the animosity left by the war carried on for years. And in recent years, Peru and Bolivia took their territorial disputes with Chile to the International Court of Justice.

The court’s ruling in 2014 was a key factor in helping Peru and Chile improve relations and a ruling on Bolivia’s dispute is expected to come later this year. Chile and Peru received a resolution that partially satisfied both countries. For Chile, the ruling was a relief because it allowed it to hold on to important maritime territory where most of its fishing activities take place. Though Peru did not receive all of its demands, it was able to expand its maritime holdings. The compromise enabled further steps toward a friendlier relationship. 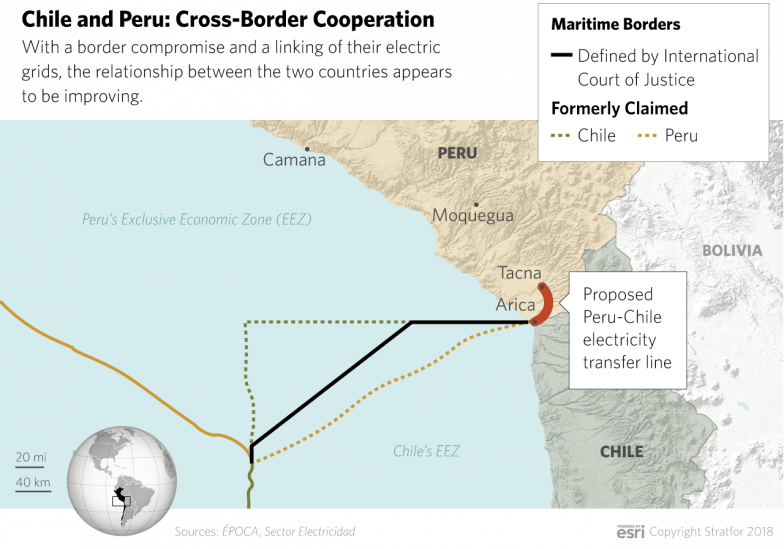 Just two years after the ruling, Chile’s defense ministry had removed over 70 percent of the land mines placed on its border with Peru. And on the trade front, relations have been improving since 2012, when both countries were enthusiastic about the formation of the Pacific Alliance, a free trade bloc created by Chile, Colombia, Mexico and Peru. Additionally, Chile now regularly ranks in the top five sources of direct foreign investments in Peru. Despite these advancements, suspicions on both sides have long prevented the two countries from deepening their relationship in the energy sector, which is strategically important for Chile’s economic future.

Fuel for the Future

Chile’s mining sector, which is responsible for over a quarter of the country’s national budget revenue, is thirsty for energy. But the country has had problems accessing cheap and reliable power from its neighbors. Bolivia is rich in natural gas, but it refuses to export to Chile because of their territorial dispute. Though the two countries have been holding meetings to improve relations, meaningful progress will be at a minimum until the international court provides a ruling. Argentina, meanwhile, has gone from a net exporter of natural gas to an importer in the past decade. Argentina’s production is expected to grow in the coming decades, but that is no help to Chile now. Peru could provide a source of energy, but it has also been reluctant to export natural gas to Chile.

Because Chile is attempting to phase out coal power for environmental reasons, the country is in serious need of strategies to increase its supply of electricity as its coal plants reach the end of their lives. Coal is responsible for over 30 percent of the electricity Chile generates, and the new line from Peru will not be able to replace that. However, the line is a first step, and projects are being evaluated to increase its capacity. Chilean investors have expressed interest, for example, in investing in thermoelectric plants in Peru that would export power to Chile.

Access to Peru’s electric system will be key to providing a more robust power supply for foreign investors interested in industrializing Chile’s lithium. U.S. automobile company Tesla, for example, has already begun negotiating with Chile’s largest lithium producer, SQM, to construct a processing plant in Chile. However, there are challenges to industrializing Chile’s lithium. In addition to the country’s energy shortage, water scarcity could pose an impediment to manufacturing.

For over a decade, Chile has tried to negotiate with Peru for access to its natural gas. However, Lima has rejected the offer because of its territorial dispute and a desire to focus on domestic demand. However, Peru has recently signaled that it may be losing its reluctance to export electricity generated by natural gas from its Camisea fields. Because of this, the electricity transmission line connecting Peru and Chile is a small but important victory for Chile in its search for more energy. The line only has a 200-megawatt capacity, but Chile has confirmed that if it is built successfully, then another line may be built connecting the Camisea Gas Project with the Chilean city of Antofagasta.

Last year brought a turning point in relations between Chile and Peru, as the two countries held their first binational Cabinet meeting in Lima. Though Peru and Chile have previously held meetings between their defense and foreign affairs ministers, this was the first gathering to involve all Cabinet ministers from both countries. And, as a result, 25 agreements were signed, and progress was made toward the electricity transmission line that has just been announced.

Though the reins of power in Chile are set to change hands in March, the country’s recently elected president, Sebastian Pinera, has already expressed an interest in fostering deeper relations with Peru. Pinera’s administration will likely make it a priority to attract foreign investors by reducing corporate taxes, but lower taxation won’t be enough to attract investors — a reliable energy system will be key. Because of this, Chile will continue to push for deeper energy integration with Peru in the coming years. And with its territorial dispute in the past, Peru may be willing to devote more energy to its relationship with Chile.