Attention, please! The leverage in the stock market has been recently rising. As one can see in the chart below, the stock market margin debt surged more than $113 billion in 2017, one of the largest annual surges. Moreover, it was the ninth annual increase in a row. 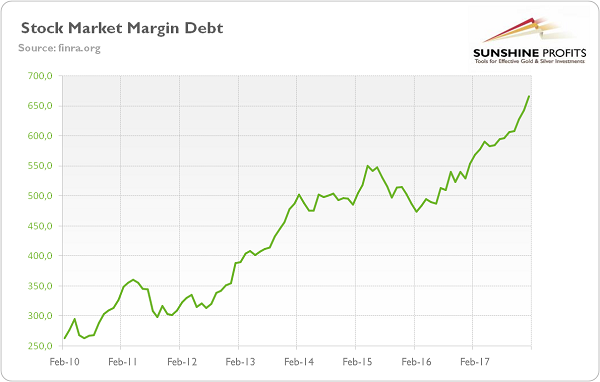 As a reminder, margin debt is a borrowing against investors’ portfolios – it means that individuals borrow money against their existing stocks to buy even more stocks. Smart way to boost gains, right? Of course, at least until the bears are unleashed and investors receive “margin calls” – the key problem with margin debt is that is works like leverage. It accelerates bull markets, but also the declines.

Should we worry about the increase in margin debt, then? Well, yes – and no. The marginal debt spiked both before the dot-com crash and the Great Recession. Moreover, the margin debt increased also relative to the nominal GDP or the S&P 500 Index since the previous peak.

But the fact that previous records preceded crises doesn’t imply that we are headed for a collapse now. There were also multiple periods where a bear market didn’t follow after the margin debt peaked.

As John Templeton famously said, “Bull markets are born on pessimism, grown on skepticism, mature on optimism and die on euphoria.” The rise in marginal debt certainly indicates the rise in investors’ confidence, but the current bull market is probably the most hated ever. The margin debt has been rising because interest rates are so low, not because investors expect that the market will explode. Actually, margin debt as a percent of the total market cap has generally been flat since the Great Recession. This is why – unfortunately for gold bulls – we believe that although the margin debt may be a red flag, it doesn’t signal the end of world.

The ultra-low interest rates also bred enormous student loan debt. Americans owe about $1.5 trillion in student loan debt, about $620 billion more than the total U.S. credit card debt! According to the Brookings Institute, almost 40 percent of borrowers will default on their student loans by 2023. The student debt crisis is worse than we thought, but does it have the potential to hinder the whole economy?

We believe that the student indebtedness is a hard hit for people who cannot service the debt, but it’s not a threat for overall financial stability. What we mean here is that the students’ problems may cut their disposable income, spending and delays their homeownership, but even if the student loan bubble bursts (which is not set in stone due to the odd bankruptcy law), the federal government backs most of these debts. Hence, gold bulls shouldn’t count on the next bank crisis caused by student loans and the resulting surge in the safe-haven demand for the yellow metal. Such a scenario is unlikely.

Subprime auto debt is also booming, even as defaults soar. Something worrisome is happening, that’s for sure (loan-underwriting standards are very lax, to put it euphemistically). However, the risks are limited, at least compared to the previous housing bubble. Before it burst, about $1.2 trillion of bonds backed by home loans were issued (about $400 billion were subprime). That compares to the $25 billion of bonds pooling subprime auto loans issued in 2017. So the auto debt bubble shouldn’t cause another global financial crisis, supporting gold prices.

Summing up, the pile of global debts is one of the major risks at the moment. In particular, the high level of household debt in Canada (above the level of Canadian GDP!) and the China’s build-up of debt (the total debt to GDP has risen above 250 percent in 2017, with rapidly growing household debt) are the most worrying debt-related concerns.

Luckily for Americans, but unfortunately for gold bulls, the situation in the U.S. is much better, at least when it comes to the private debt (the threats related to the rising federal debt that we have already discussed). The key is that the both the households and the private non-financial companies deleveraged after the crisis (see the chart below), so there is potential for further economic expansion. 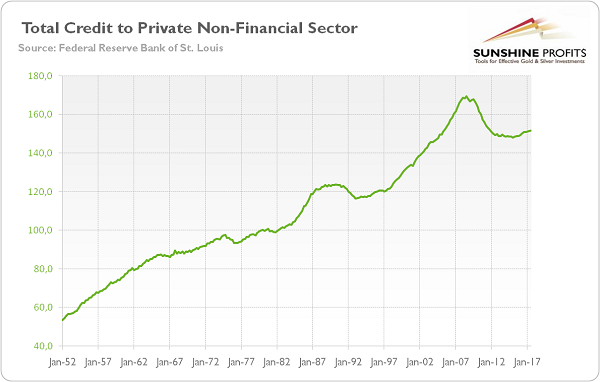 The margin debt has been rising, but we are far from euphoria. During irrational exuberance, the marginal debt usually increases multiple times above the average change in equity prices – and we are not quite there yet. The student and auto loans are booming, but these bubbles shouldn’t cause a systematic financial crisis.

What does it mean for the gold market? Well, the high levels of debt are certainly worrying, especially during the Fed’s tightening cycle. If something bad happens, debt will become a burden and the yellow metal should gain as a safe-haven. However, with gradual interest rate hikes and subdued inflation, the expansion may last for a while, despite the high indebtedness. The situation of households is better than before the Great Recession. The public debt is more troublesome, but investors should remember that the U.S. dollar is a world reserve currency, so the bankruptcy of Uncle Sam is rather unlikely. So, it is definitely worth monitoring the debt cycles. In the long-run, rising interest rates and increasing debt with an over-leveraged economy is the best recipe for disaster, we totally agree. However, the recent fears seem to be a bit overblown, at least in the short-run.