The United States is tightening the economic screws on Russia. On April 6, the U.S. Treasury Department slapped sanctions on seven oligarchs, 12 oligarch-owned companies, 17 senior government officials, one state-owned defense firm and one bank in Russia. The sanctioned parties — which the United States claims benefited from or contributed to Russia’s activities abroad, including its involvement in foreign conflicts and political affairs — will lose access to their U.S. assets starting in June. They also will lose the ability to travel to the United States and to do business with U.S. citizens. The Russian economy as a whole, however, won’t feel much pressure — at least not right away.

Moscow has had time to adjust to and anticipate economic restrictions in the four years since the European Union and United States first imposed sanctions. Though the latest sanctions’ announcement drove the ruble down to its lowest point since December 2016 and brought the Russia Trading System index down 13 percent, both recovered within a few days. The Russian economy is stabilizing after years of recession, and the country’s National Wealth Fund stood at $65.9 billion as of April 1. Finance Minister Anton Siluanov, in fact, has said that the Kremlin may actually wind up with a budget surplus this year, depending on energy revenues. The targets of the sanctions will be the ones bearing the brunt of the new restrictions, but that detail doesn’t mean the Kremlin won’t respond.

As we noted in the 2018 Annual Forecast, tensions between the United States and Russia are on the rise this year. Driving the enmity are the countries’ disagreements over the conflicts in Syria and Ukraine and the continuing U.S. investigations into Russia’s meddling in the 2016 presidential election. Washington’s latest sanctions against Moscow will only add to the strife.

At greatest risk under the measures is Rusal, an aluminum company whose owner, oligarch Oleg Deripaska, was once Russia’s richest man and is now a major target of the expanded sanctions. Shares in Rusal, which produced 5.7 percent of the world’s aluminum last year, have fallen by more than 50 percent since the sanctions passed, while shares in Deripaska’s main holding company, EN+, have dropped more than 25 percent. Given that the United States accounts for a significant portion of Rusal’s business — $1.4 billion in 2017 — the new sanctions probably will hit the company harder than the other targets. To compensate for the lost revenue, Rusal will follow through on plans to divert more of its product to customers in Asia and the Middle East. The margins for exports to these markets, however, likely will be lower than the margins for exports to the United States.

Further compounding Rusal’s problems, the sanctions legislation stipulates that companies outside the United States “could face sanctions for knowingly facilitating significant transactions for or on behalf of” the targeted entities. Multinational mining group Rio Tinto PLC already has announced to shareholders that it is “reviewing” its relationships with Rusal, and Glencore PLC trading and mining company has begun cutting ties with the firm. Other companies around the world may be similarly wary of doing business with Rusal under the latest sanctions regime.

In light of these developments, the Russian government has offered to help Rusal, which employs more than 70,000 people. Siluanov announced April 11 that the Kremlin would give the company short-term liquidity but that it had no plans to buy a stake in Rusal or to create a state fund to purchase its aluminum. Regardless, the government’s assistance will probably make Deripaska — until now one of Russia’s more independently minded oligarchs who was actively engaged with the West — more beholden to Vladimir Putin and his administration. 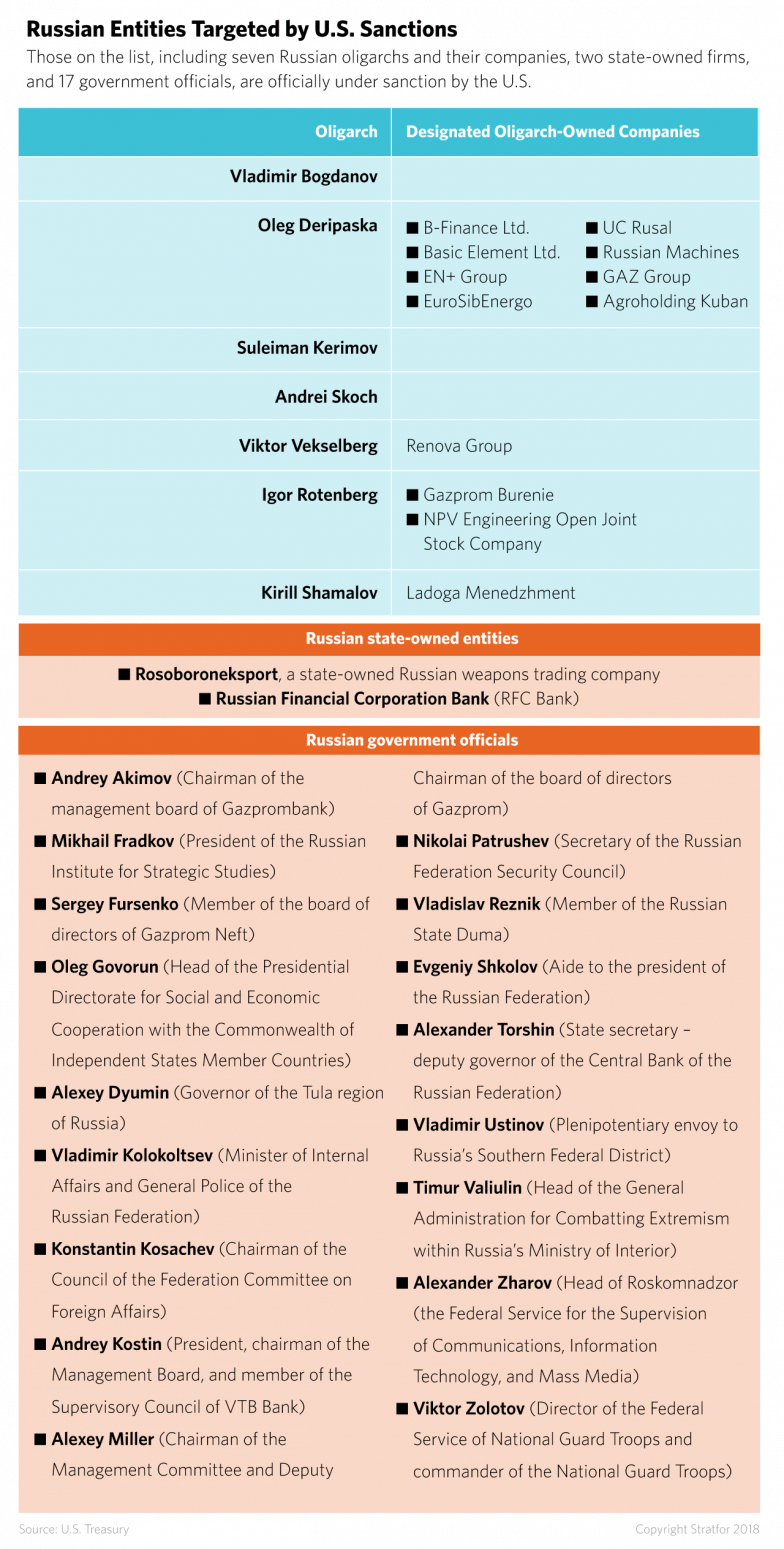 But the consequences of the restrictions on Rusal will reach beyond the company, and beyond Russia. Global aluminum prices have risen 14 percent since the United States passed the new sanctions — the biggest weekly price increase for the commodity in 30 years — and they’re still climbing. And because U.S. customers will have to stop buying from Rusal once the sanctions take effect, more and more of them will turn to China for aluminum. The country, the world’s largest producer of the metal, is the most logical replacement for Rusal on the international market, notwithstanding the heavier tariffs the U.S. administration recently imposed on imports of aluminum. As other countries face the risks of secondary sanctions from the United States, they, too, will look to source their aluminum elsewhere, thereby rerouting global aluminum trade flows.

Russia, meanwhile, will weigh its options for firing back against the additional U.S. sanctions. On April 13, the lower house of the Russian parliament, the Duma, introduced a bill to restrict imports of American-made goods, including agricultural products, software, medicine, alcohol and tobacco. The legislation also proposed a ban on U.S. participation in Russian privatization deals and on titanium sales to American aerospace business Boeing Co. Lawmakers convened April 16 in an extraordinary session to review the bill and have scheduled a first reading for May 15.

And countersanctions may be just the beginning. Tensions already have flared between Moscow and Washington this month over the war in Syria, where U.S. cruise missile launches have met with threats from Russia to shoot the projectiles down. At the same time, the fighting in eastern Ukraine has also intensified. As the United States beefs up its sanctions on Russian entities, Moscow could retaliate with asymmetric responses in these conflicts, creating political and security consequences Washington likely didn’t intend while also deepening Russia’s economic isolation from the West.