By Michael Ballanger – Re-Blogged From http://www.Gold-Eagle.com

To start off, I find it astounding that of all the ways that dictionaries might cite the usage of the word “shenanigans”, they elected to discuss it in its context to the financial industry and how shenanigans have “ruined the fortunes of many”. To wit, as we move into the month of May, we are entering the six-month period during which stock prices have historically faltered, setting up the old saw that one should “sell in May and go away”.

I first used that phrase (which I have since grown to detest) back in 2009 when I determined that the TSX Venture Exchange at 737 was quite cheap relative to its 2006 high at 3,300 so I wrote one of my first pieces for Streetwise Reports entitles “Sell in May and Make Some Hay” after which the TSXV peaked at 2,400. I thought then (as I do now) that the there was something rather odd occurring in the junior mining markets because while the blue-chip averages were in full recovery mode, the micro-cap explorco’s were not getting any of the love being doled out by the Fed’s QE and Tarp programs. Investors were completely confident in the hot momentum stocks (like the banks) but were not terribly confident in the inflation beneficiaries like the Gold Miners, whose junior brethren were largely domiciled on the TSXV. It seemed to me then (as it does now) that a hefty dollop of insidious “SHENANIGANS”  were being carried out in covert fashion, the likes of which moved from the ridiculous to the sublime with the April (2011) Massacre in the gold and silver markets that most certainly were to be found under the headline of “shenanigans” and most certainly “ruined the fortunes of many”.

Now, while not nearly the scope or breadth of the criminal collusion of 2011, the past few weeks have a similarly pungent aroma arising from the price behaviour of a) stocks, b) volatility (UVXY), and c) Gold and Gold Miners.

Shenanigation #1) Stocks: You will recall that I came out in late January of this year with the S&P500 north of 2,825 and told the world that “it’s time for the beast to exhale” after which the S&P dropped like a stone to 2,352. That move was met with a couple of interventions with the first in February and the second in March at exactly the 200-dma. The color commentators on CNBC mentioned the 200-dma eighty-seven times the day of the February bottom and forty-six times during the day of the March bottom while the phrase itself showed up in print over ten-thousand times. The S&P 500 was up over 300 points from the February and March lows largely in anticipation of “earnings season” but in the past two weeks, both the S&P and the NASDAQ have been hobbled by a “sell the news” behavioural quirk which, for me, is a sure-fire signal that bigger investors are viewing Q1/2018 as the peak for the business cycle. Interestingly, we know now that the big boys needed a robust retail buying season in order to off-load their portfolio positions so the narrative was, understandably, that earnings would be “blow-out” and take stocks higher and that is the shenanigans that transpired back in February and March with the rescues at the 200-dma. The retail pitch sheet was constructed on the earnings outlook, not the tape action such that the brokers could say they were “right” about the EPS parade and hide under their desks. 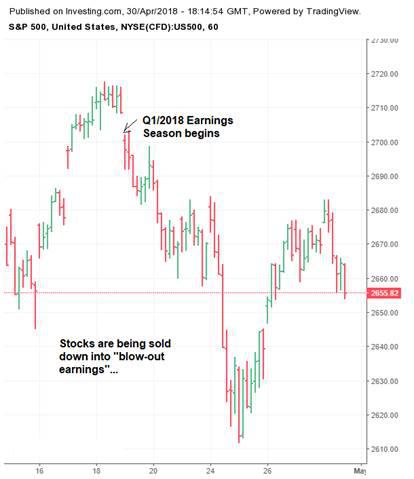 Shenanigation #2) Volatility: Again, not to try to blow my own horn (at least not to any great degree), between January 16th and February 6th, I fired off a number of tweets regarding volatility with a specific reference to the triple-leverage ETF (UVXY:US) that was sitting at $9.00 in mid January and was the most heavily-shorted ETF on the planet to the extent that even the new Chairman of the Fed admitted that they too were short. So since VIX-suppression has been a well-known but under-advertised mechanism used by the Criminal Interventionalists to juice stock prices, it appeared to me as the utmost “Fade the Fed”, contrarian, set-up trade EVER. As it turned out, I honestly did not expect them to allow the VIX much above 15 but it actually went to 49.61 and did so in a mere three weeks after I positioned myself for an upside “probe” in volatility without thinking it would be an upside EXPLOSION in volatility. In sum, what backfired on the masses was that they were betting blindly that Fed shenanigans would continue unabated and that being short “VOL” was the “smart-money trade”. It might have been labelled “Shenanigans gone wild” because it turned out to be a highly-satisfying trade from both a psychological and financial perspective.

Approximately twenty-one days later, I followed up with this tweet: 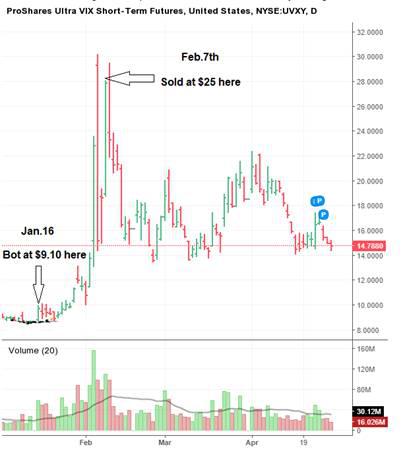 Shenanigation #3: Gold and Gold Miners: The third example of out right financial fraud was the price-capping farce we have experienced in gold and silver since 2011 which continues today amidst widespread acknowledgement by CEO’s in their MD&A’s and in the forward guidance offered by companies using any commodity or energy caught in the crosshairs of the impending global trade war. Global trade wars (or even the threat of such) are not good for business and are, in fact, INFLATIONARY” because of supply dislocations which cause price distortions. 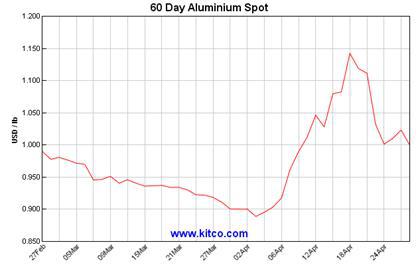 So with the recent spike in aluminum prices, why is it that a commodity seemingly about to be constrained by tariffs can spike 27% in eight weeks on “supply fears” while freighters full of gold are allegedly being off-loaded in Hong Kong with the paper gold trading volumes exceedingly annual mine output? As I wrote about last week, the machines are allowed to go berserk and assign valuations to commodities that have zero justification in fundamental analysis. The silver market appeared poised for a move to the mid-$18’s around mid-March and based upon the massive and unprecedented aggregate short position being held by the Large Speculators, there was little doubt that the long series of bottoms in the $16.15-16.25 range would hold and I therefore went long after writing “With reckless abandon and unconscionable spine, BUY silver…” (March 23).

The result was an approximate $1.00 pop in silver which appeared to be nothing more than a short-covering orgy carried out in desperation by the Large Speculators based on the COT data from the coinciding period. What SHOULD have occurred was a prolonged and accelerated advance in silver prices as the shorts scrambled to find enough supply to fill their buy orders but because the Commercials were sitting there, ready, willing, and able to wave their magic wands and create fictitious “supply” by way of the Crimex, the squeeze was short, sweet, and relatively painless. This last act of shenanigans is “murder most foul” for analysts like me because it does actually represent the removal of my billfold from my trousers whilst standing unsuspectingly within a crowded room. Understandably, the glee I would derive from seeing a large piton driven into the forehead of a bullion bank behemoth after one of these episodes cannot be adequately imagined. It is THEFT, plain and simple.

So now that I have covered three areas of “secret or dishonest activity or maneuvering” that arrived miraculously at the end of the month and right the end of earnings season, I continue to view the best “short” for 2018 to be the sale of the Gold-and- Silver-Ratio above the 80 figure. The chart below is a short-term chart but you have seen the one I provided when I wrote the initial piece on the GTSR last week. As I have said many times before, it was the ratio at 85 in 2002 that triggered my decision to buy silver under $4/oz. and it is the GTSR over 80 that occurred again in 2008 and recently in late-2017. All three times what followed were significant declines in the ratio with 44, 32, and more recently 65 as the basing level. Therefore, the Trade of the Week is going to be to add to the short of the GTSR in the supra-80 range on the assumption that within a reasonable period of time, the GTSR will react to gravity and plunge. I further urge all of the other quasi-analysts that look to silver as “nothing more than a bi-product” of giant copper, zinc, and lead mining operations might want to consider whether the notional value of the paper “hedges” carried on the books of the bullion banks might not represent the ultimate discounting mechanism. Perhaps carrying a paper short position analogous to four years of annual mine output might be sufficient to offset this “bi-product” effect which allows sub- economic silver onto the market without penalty. I say that the bullion banks have already gotten ahead of that argument and of that particular curve. It is the unwind of such that embodies the explosive horsepower of the trade. And it is the reason you should short it. 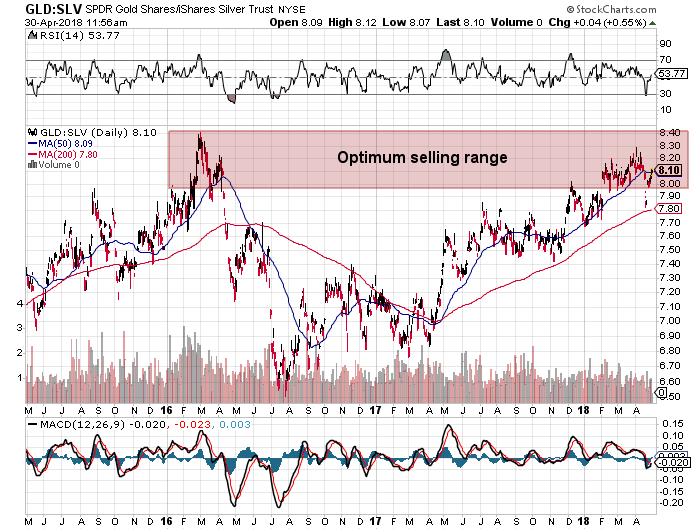 This letter makes no guarantee or warranty on the accuracy or completeness of the data provided. Nothing contained herein is intended or shall be deemed to be investment advice, implied or otherwise. This letter represents my views and replicates trades that I am making but nothing more than that. Always consult your registered advisor to assist you with your investments. I accept no liability for any loss arising from the use of the data contained on this letter. Options and junior mining stocks contain a high level of risk that may result in the loss of part or all invested capital and therefore are suitable for experienced and professional investors and traders only. One should be familiar with the risks involved in junior mining and options trading and we recommend consulting a financial adviser if you feel you do not understand the risks involved.