By Omar Lamrani – Re-Blogged From Stratfor

Changing times call for changing measures. In the face of an intensifying great power competition with Russia and China, the United States is expanding its efforts to refocus its global strategy, force deployments and resources to better position itself in a new struggle. But recalibrate as it might, the United States’ enduring commitments, along with global flashpoints, will continue to sap the country’s attention and resources as it wages a new global battle for influence.

At the outset of 2018, Stratfor noted that the deepening collaboration between China and Russia would pose a strategic threat to the United States, prompting the latter to consolidate its alliances in the Eurasian borderlands. Washington is doing that and more as it embarks on a period of great power competition with Moscow and Beijing, but ongoing commitments and regional issues appear set to dog its efforts.

Following the collapse of the Soviet Union, the advent of the so-called global “war on terrorism” in 2001 ushered in a change in the United States’ strategic defense posture, which shifted from a primary focus on defeating a great Eurasian power toward a more diffuse, enduring and amorphous effort against violent non-state actors and “rogue” states. As part of this transformation, the United States significantly bolstered its force presence in the Middle East and North Africa, South Asia and sub-Saharan Africa, altered its training structure and prioritized different sets of military capabilities. At the same time, the United States greatly reduced its presence in Europe, decreased its capabilities in the Pacific and shuttered a large number of headquarters primed for a potential war with Russia.

But after years of unceasing conflict in the Middle East and South Asia, the United States has come to recognize the profound shift in the global strategic balance. Observing China’s growing strength and efforts to modernize its military, the Obama administration attempted to rebalance toward Asia with the “Pacific Pivot” in 2011. Russia’s military intervention in Ukraine in 2014 also completely altered the United States’ direction in Europe, as Washington rushed additional forces to the Continent as part of increased rotational deployments under the European Reassurance Initiative after it had begun to withdraw forces from the region. 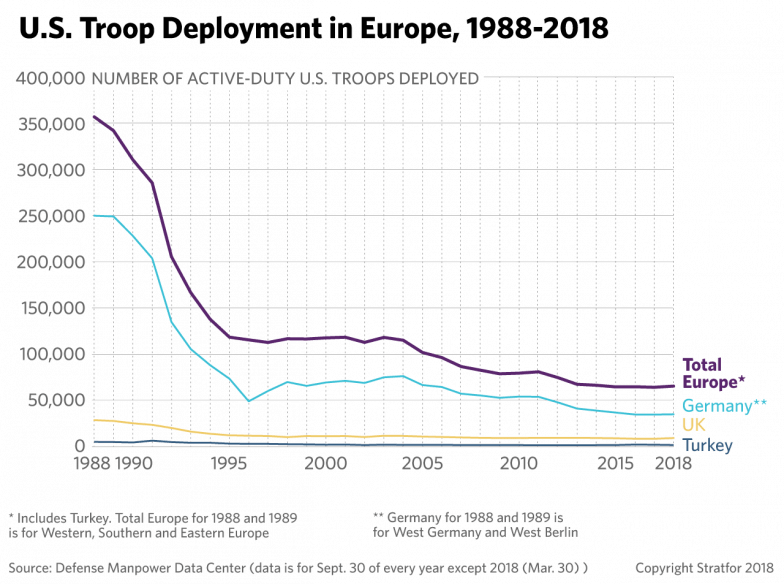 But this year’s National Defense Strategy, which identifies great power competition as the “central challenge to U.S. prosperity and security,” leaves no room for doubt as to the strategic direction the United States wishes to pursue in its security outlook. Reinforcing the new defense strategy is a robust defense budget that seeks to repair some of the readiness shortfalls stemming from years of sequestration (automatic spending reductions).

In line with its strategic direction, the United States will make significant changes in terms of the regional deployment of strategic forces and, in the same vein, the geographic areas it wishes to prioritize. The North Atlantic has emerged as a central battleground in the competition with Russia, prompting U.S. military officials to announce plans to reactivate the U.S. 2nd Fleet in July after deactivating it in 2011. The 2nd Fleet’s central mission will be to ensure U.S. naval dominance in the body of water amid increased forays by Russian submarines into that particular ocean. At the northern edge of the area, Iceland, which is strategically positioned as a base from which to detect and intercept such submarine activity, is accordingly receiving increased attention from the United States after its significance waned following the end of the Cold War.

At the other end of Europe, Ankara’s balancing effort between the United States and Russia will gain added importance as Moscow seeks to break the containment role that Turkey, home of the strategic Bosporus, has played on its flank and the U.S. efforts to maintain it. Elsewhere on the Continent, the Baltic nations — Poland, Ukraine, Belarus and Georgia — have assumed an increasingly important role as battleground states between the United States and Russia. In the north, Scandinavia in general and Norway in particular are witnessing increased attention from the United States as well, mainly because of the area’s strategic proximity to the Arctic theater. Furthermore, the U.S. Navy has raised the number of deployments made by the 6th Fleet to the European theater amid expectations of more patrols in the Baltic and Black seas.

In the Pacific, China’s growing arsenal of ballistic and cruise missiles and the United States’ lack of air bases relative to other theaters complicates the latter’s strategic military posture in the competition with Beijing. As a result, the United States must place special emphasis on its relationship with Japan and Singapore. At the same time, the Pentagon is simultaneously searching for alternative bases in places such as northern Australia, the Philippines and the Northern Mariana Islands. The United States already maintains a considerable military presence in South Korea, but these forces are largely oriented toward a potential conflict with North Korea and could even constitute a strategic liability to the United States because they would be within striking range of China’s much larger land forces in the event of open hostilities. 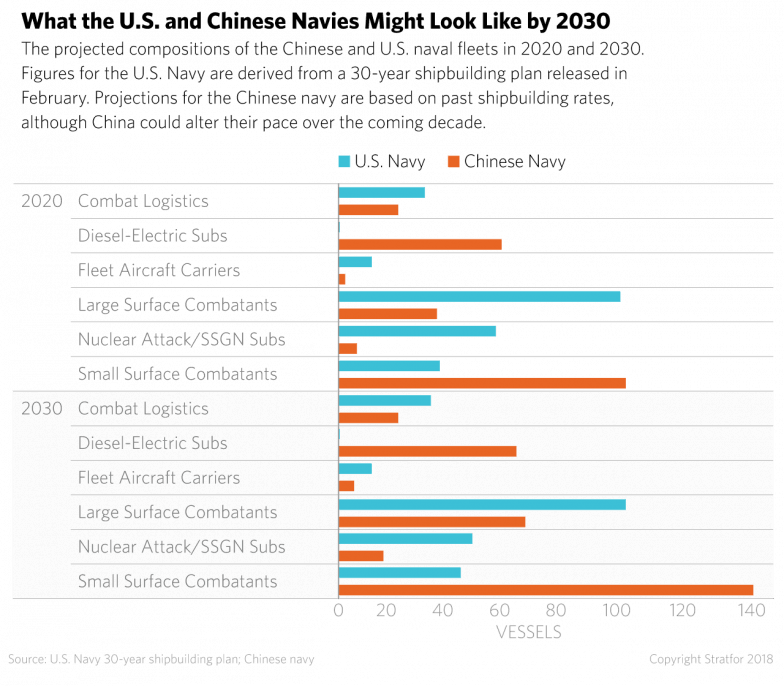 The United States is the world’s dominant naval power, but China has ambitions to closing the gap.

Beyond military issues, however, Washington also aims to strengthen its relationship with a number of non-allied Asia-Pacific countries as a hedge against China’s ascendancy. India, Vietnam, Malaysia and Indonesia, in particular, are all likely to witness increased attention from the United States in the years ahead. Together, these countries form a solid anchor on the southern rim of the first island chain — an area that encircles the Yellow, East China and South China seas — from which the U.S. Navy could choke off China’s sea lines of communication to Africa, the Middle East and Europe. Naturally, China is unlikely to remain passive on this front, and will work hard to enhance its relationship with Southeast Asian countries in response. 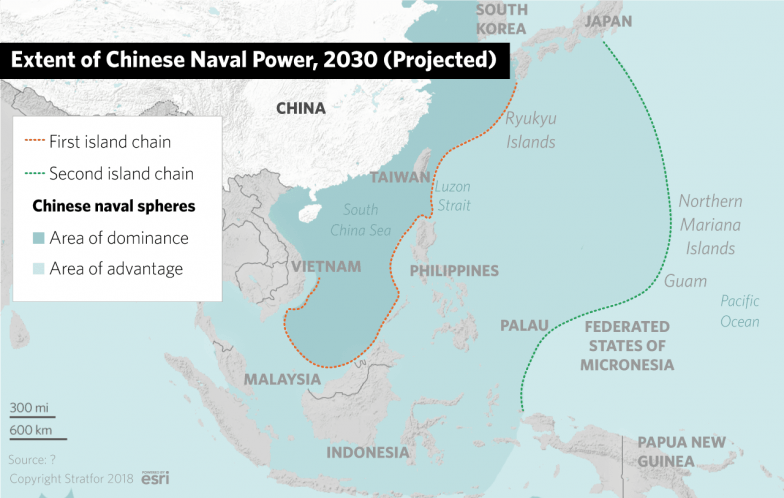 Unsurprisingly, Taiwan remains a serious bone of contention. The United States appears increasingly willing to provoke China’s ire against the island through the sale of sensitive military equipment and enhanced diplomatic and military engagement with Taipei. Accordingly, Taiwan is the issue that is most likely to push the strategic competition between Washington and Beijing into an active conflict, especially as China’s military options expand with its naval development.

Finally, the United States is considering major changes in how it deploys its main naval forces on a global basis. Over the last three decades, U.S. aircraft carrier task forces have maintained a virtually constant presence in the waters around the Middle East. Now, however, the country is working toward shifting its deployments to focus more on the European and Pacific theaters and to be less predictable and routine in its naval forays.

The Fly in the Ointment

Although Washington has recognized the emergence of this new great power competition and begun acting accordingly, several flashpoints could distract the United States and tie up its resources and focus. Of these, the most prominent is the global “war on terrorism,” which continues to this day, even as its focus has shifted considerably since beginning 17 years ago. Globally, but especially in the Middle East and North Africa, South Asia and sub-Saharan Africa, the United States has devoted considerable attention and resources to this fight. In turn, this has placed significant strain on the United States’ special operations forces and hurt the readiness of U.S. air forces, both from the Air Force and the Navy. Almost two decades of consistent deployments and rotations to frontlines and bases have left little time for recuperation. This fatigue, coupled with the recent effects of sequestration, has led to maintenance problems, the widespread cannibalization of airframes and a recent spike in accidents.

The United States preparations to confront China and Russia could be derailed by significant conflicts and engagements elsewhere.

Adding to this ongoing strain is the potential for significant conflicts that could distract the United States from its preparations to confront China and Russia. Immediately, this could emerge in the form of a possible war with either Iran or North Korea — or both. The U.S. withdrawal from the Iranian nuclear deal and the adoption of an increasingly hard-line stance on Iran’s activities in the Middle East could ignite a conflict between the two, especially if Tehran chooses to restart its nuclear program in response to Washington’s actions. As for North Korea, the initial optimism regarding a summit between Washington and Pyongyang could rapidly give way to preparations for war in the absence of any breakthrough in negotiations.

A war with either Iran or North Korea would undoubtedly require the commitment of large numbers of forces and funds, but even a containment strategy against both could entail long and significant deployments in and around the Persian Gulf and the Korean peninsula. The United States could rapidly reverse its decision to curtail its permanent carrier presence around the Middle East, the theater of operations for the 5th Fleet, if tensions with Iran rise significantly as a result of Washington’s increasingly confrontational approach toward the country. The return of more forces to the Middle East, however, would hamper the United States’ struggle against Russia and China, since the region is far removed from the areas of activity central to the emerging great power competition. Force dispositions around North Korea, on the other hand, offer more flexibility because the U.S. military could redirect troops and materiel in northeast Asia, especially those in Japan — if not those in South Korea that are locked on North Korea and remain vulnerable to Chinese action — to face China more easily.

These costly distractions to U.S. power are unlikely to escape the attention of China or Russia. As the great powers engage in increasingly adversarial competition, the planet might witness a geopolitical climate unseen since the days of the Cold War. The hallmarks of such competition would include concerted support for insurgencies and proxy forces around the globe that could tie down an adversary in protracted and expensive campaigns. Russia, in fact, has already begun pursuing some facets of this new fight by reportedly supporting certain factions of the Taliban in Afghanistan, while the United States has previously backed certain anti-Russian factions in Syria. In this context, if the adversarial relationship between the United States and Iran reaches a more bellicose level, Moscow and Beijing could provide direct aid to Tehran to improve its capabilities.

The United States has moved to define the great power competition with Russia and China as its greatest priority, necessitating a restructuring of the country’s global military footprint, reallocation of resources and shift in strategic focus. The Pentagon has already begun implementing measures in this regard, but it is by no means a straightforward process. Continued distractions abound, specifically the crises with Iran and North Korea, though more generally the enduring U.S. commitment to the global “war on terrorism.” In the end, the United States will undoubtedly intensify its focus on great power competition, but overcoming these distractions will be no easy task — especially as China and Russia are unlikely to make the United States’ attempts to disentangle itself any easier.

Omar Lamrani focuses on air power, naval strategy, technology, logistics and military doctrine for a number of regions, including the Middle East and Asia. He studied international relations at Clark University and holds a master’s degree from the Diplomatic Academy of Vienna, where his thesis centered on Chinese military doctrine and the balance of power in the Western Pacific.