Powell and Co. hiked again. And the FOMC removed the important phrase about “accommodative” stance. What now for gold?

Yesterday, the FOMC published the monetary policy statement from its latest meeting that took place on September 25-26. In line with the expectations, the US central bank raised the federal funds rate by 25 basis points to the target range of 2 to 2.25 percent:

In view of realized and expected labor market conditions and inflation, the Committee decided to raise the target range for the federal funds rate to 2 to 2-1/4 percent.

In related actions, the Board of Governors also hiked the primary credit rate from 2.50 to 2.75 percent and the interest rate paid on required and excess reserve balances from 1.95 to 2.20 percent. The upward move in the federal funds rate was the eight lift since 2015.

Besides the hikes, the statement was barely changed from the July/August version. The overview of the economy is the same as previously. The only, although important, modification is the drop of the longstanding phrase that the stance of Fed’s monetary policy “remains accommodative, thereby supporting strong labor market conditions and a sustained return to 2 percent inflation.” The change in language is perfectly justified as inflation is near 2 percent, while the labor market remains healthy (not counting, of course, the low labor force participation after the crisis). And the federal funds rate is approaching its neutral level, which is considered to be neither accommodative nor restrictive.

What does that modification imply for the gold market? Well, the decision to remove phrase about “accommodative” stance seems to be hawkish at the first glance. The Fed drops the dovish language, after all. Indeed, the change may signal that the Fed is moving closer to a restrictive policy setting. It would not be positive for the price of the yellow metal.

But the change in wording can also be interpreted as dovish. You see, the FOMC dropped its assurance of being accommodative because it feels that the US economy is getting closer to a neutral policy setting. If the US central bankers pause at neutral or even end their hiking then, it would support the gold prices. Which interpretation is closer to the truth? Let’s look at the dot-plot!

The September FOMC projections were little changed from the June edition. The biggest change is that the FOMC boosted its forecast for U.S. growth in 2018 from 2.8 to 3.1 percent, but it expects GDP to eventually slow to 1.8 by 2021. The forecast for the unemployment rate or inflation rates remained practically the same as in June. And the Fed predicts one more rate hike this year and three more in 2019, unchanged from its prior forecast. But that does not mean that the recent projections are not insightful. As a reminder, the FOMC sees the federal funds rate (the midpoint of its target range) at 2.4 percent in 2018, 3.1 percent in 2019, 3.4 percent in 2020 and 2021 and 3.0 percent in the long-run. It means that the Fed is going to raise rates above the appropriate level in the long-term, so the US monetary policy is likely to turn restrictive in 2020, unless something negative happens, of course.

And investors should not forget that the longer-run dot, the so-called “r-star” estimate, rose from 2.875 to 3.000 percent, which gives the US central bank more room for tightening, without being accused of being restrictive and killing growth. As Powell said during his introductory remarks at the press conference, the interest rates “remain low”. It signals that he is not afraid of Trump’s bullying and he does not want to pause anytime soon.

Another hawkish change within the Fed is that Richard Clarida has been finally sworn in as a member of the Fed’s Board of Governors and as a vice chairman, the second most powerful position at the central bank. The September dot-plot suggests that he is more hawkish than the median FOMC member (for example, in case of 2019, we assume that a new dot at 3.375 percent, which is above the median, reflects Clarida’s forecast), another bad news for gold. Indeed, after some volatility in the aftermath of the FOMC meeting, the price of gold started today’s trading at a lower level than yesterday, as one can see in the chart below. 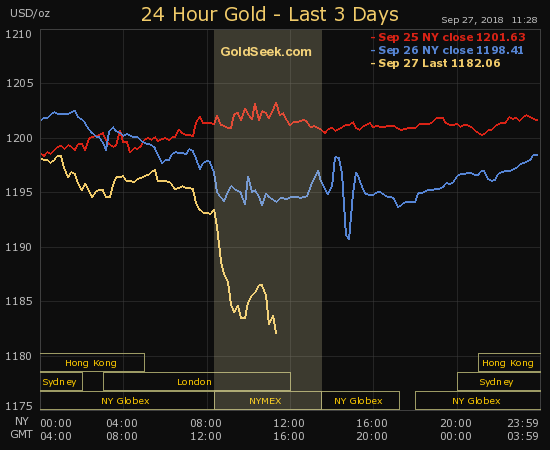 But let’s put the short-term moves aside for a while. The Fed sees at least three more years of economic growth and a higher level of neutral interest rates. The composition of the FOMC became more hawkish. The Fed has just dropped the phrase about its “accommodative stance” and is going to adopt a restrictive policy in the medium-term. And Clarida, which seems to be more hawkish than the average member, has joined the FOMC. All of these factors seem to be quite hawkish and negative for the gold prices.

However, you should remember that the Fed’s outlook did not change radically in September. Markets are forward-looking and the pace of further hikes is going to slow down (the Fed sees four hikes overall in 2018, three in 2019, one in 2020, none in 2021). It means that the strongest tightening is behind us, so some downward pressure on gold could be eased.

The key thing is that the market doesn’t believe so far the Fed’s going to deliver all the hikes it predicts. This is why we have not seen a stronger reaction. But if the Fed delivers, markets may be surprised…and the gold prices may fall then. Will that happen? We will see, stay tuned!