Palladium might not fill headlines the way gold does, but it’s been on fire lately. Not only has the precious metal been the best performing commodity for two years straight, but its price also just shot past gold for the first time since 2001. For the first time ever, it broke through $1,400 an ounce last week before pulling back somewhat. From its 52-week low set in August, palladium has climbed almost 70 percent. It’s added about 16 percent in the past 30 trading days alone.

Supply is tight, but like many other things, we largely have government policy to thank for the palladium rally. In this case, I’m talking specifically about governments in Europe, which have recently strengthened their vehicle emission standards. The “Euro standard,” as it’s called, classifies vehicles on a scale from one to six, with one being the most polluting and six being the least polluting.

Some European cities have already banned the dirtiest “Euro 1” vehicles from their streets. Old diesel cars and trucks were outlawed in Brussels effective January 2018. In May 2018, Hamburg became the first German city to do the same.

Diesel Engines in the Crosshairs

But now that it’s a new year, some city governments are escalating the ban to include Euro 2 automobiles that run on diesel. Next month, Frankfurt—Germany’s financial hub—will go so far as to ban all Euro 4-and-worse diesel vehicles, and all Euro 1 and 2 gasoline-burning vehicles.

I believe this escalation was prompted in part by a comment made by Elzbieta Bienkowska, a European commissioner whose responsibilities include oversight of industry and entrepreneurship. Speaking to Bloomberg in May, she said that “diesel cars are finished.” 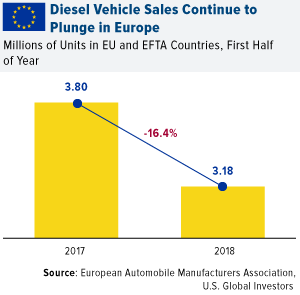 And then, as if to hasten Bienkowska’s prediction, a damning study on diesel engines was issued in June by the very same group that blew the whistle on Volkswagen’s emissions scandal back in 2015. According to the study, conducted by the International Council on Clean Transportation (ICCT), even the newest, cleanest diesel vehicles failed to meet Europe’s strict emission standards in “real world” driving conditions. Peter Mock, the ICCT’s managing director, defended the report, saying that “pretty much all Euro 6 diesels on the market are not clean.”

European sentiment of diesel was already in freefall, but momentum is increasing. In the first half of 2018, sales of diesel vehicles within the European Union (EU) and European Free Trade Association (EFTA) fell more than 16 percent compared to the same period in 2017. For all of 2018, British sales of diesels were down nearly 30 percent, according to the Society of Motor Manufacturers and Traders (SMMT). Between 2016 to 2018, diesel’s share of new vehicle sales in the EU plunged dramatically, from nearly half of all sales to just under a third.

Palladium Has Been the Beneficiary

So what does all of this have to do with palladium? The metal, as you probably know, is used in the production of catalytic converters, which “scrub” pollutants from the exhaust of internal combustion engines. And because of Europe’s enforcement of strict new standards, demand for these devices is surging, along with palladium itself.

Demand is so high, in fact, that there are now reports, in the U.K. and U.S., of thieves stealing catalytic converters, sometimes in broad daylight, to extract the precious metal. On Thursday, it traded as high as $1,434.50, according to CNBC.

There’s more to the story of palladium’s bull-run. For the past several years, supply has been in deficit. That’s mostly because around 80 percent of all palladium (and platinum) production is concentrated in two countries—South Africa and Russia. The geopolitical risks are high. When South African laborers went on strike in 2014, all production of the platinum metals, including palladium, grinded to a halt. 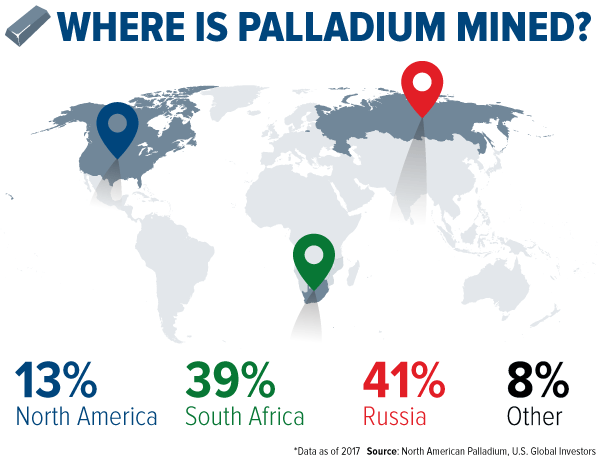 Besides supply issues, the biggest risk facing palladium right now is substitution risk. With palladium trading above $1,400 an ounce, how long will it be before auto manufacturers switch to its sister metal, platinum, which is currently trading at around $800 an ounce?

In the meantime, there could be money to be made.