Skip to content
HomeThe Fed’s Failure is a Fait Accompli

Here is a single chart that proves how completely the Fed’s end-game for its recovery failed, which means the fake recovery, itself, is failing. It’s not hard to figure out what happened here.

Talk about a euphoric rise at the end of the Trump Rally heading into 2018, followed immediately by a massive blow-off top. When you compare the size of the blow-off to the total size of the S&P 500, it looks almost like Mount Saint Helens blew its top off.

2018 became a year filled with market explosions that happened in spite of a massive increase in stock buybacks — the greatest number of buybacks in the history of the world (not even slightly an exaggeration). Those buybacks were funded by some of the largest tax breaks in history and by hundreds of billions of dollars in foreign profits that suddenly became spendable in the US. That means the Fed’s end game failed even when it had the most spectacular tail winds you could ever hope for helping it out! The Fed could not have had a more favorable situation in which to attempt its experiment.

2018 gave us the worst stock market crackup by far since the bottom of the Great Recession. (So much so that it stands out like a fire on a hilltop in the graph above of that entire period. You don’t have to look for it to find it.) We can now clearly see the market’s breakup coincided perfectly with the Fed’s balance-sheet unwind. In only three months the market lost almost a quarter of everything it had gained over the entire past decade of massive quantitative easing!

What makes the crackup more dramatic is knowing that the Fed’s scheduled tightening during those last three months was set at only 5/8 the quantity or speed at which the Fed had been easing!

That would look bad enough if the Fed had met its 5/8 target, but it actually did not. As it turns out, the actual Fed reductions on its balance sheet fell well short of its stated target for its terminal velocity:

The operative word in that paragraph is “caps.” They called it a cap because the Fed can only roll off as many treasuries and MBS as mature each month, and in recent months there have apparently not been enough maturing to reach anything close to their $50 billion cap. (That or the Fed chickened out and didn’t roll off all that it could.) October, 2018, was, in fact, the only month that hit that cap: 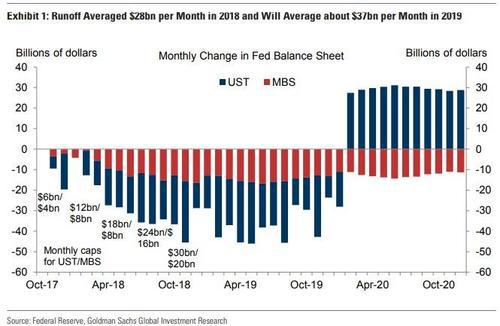 Given that the actual roll off, once the Fed reached its planned maximum, turned out to be far less than the Fed had indicated (essentially a return after one test all the way back to its actual spring roll-off rate), the impact of quantitative tightening proves to be exponentially greater than the impact of easing! (With tightening actually happening at less than half the amount of easing each month, the market moved twice as steeply.) That stunning market response explains why the Fed abruptly surrendered its Great Recovery Rewind plan near the end of December.

The Fed’s Great Reversal of the Great Recovery Rewind

There is not the slightest chance the Fed would have made such a hard reversal of its stated plan, causing Powell to look (as many commentators are now saying) like “Trump’s bitch,” if the Fed did not believe the market was crashing hard. That it caved in on its master plan so quickly says to me that it feared the market’s blow-off top risked becoming an all-out crash if it did not capitulate to Trump’s demands.

Powell made the Fed look impotent and politically directed. To risk that, he must have believed something as big as the collapse of banks and businesses would follow if stocks were allowed to dive any deeper. You can be certain he waited as long as he could muster the courage to hold to the plan before taking on the foreseeable disgrace that is now being directed at him.

This looks to me like the most obviously panicked move we’ve seen the Fed make since the market crashed when the US credit rating was downgraded in August of 2011 due to Republican brinksmanship over the debt ceiling. That event was the first time after 2008 that I said the market would fall hard (in August no less and for precisely the reason it did). The Fed back then rushed to the rescue by promising what became its largest and lengthiest QE program of all.

This time is much different. This time the 21 Comments is attempting to rescue the market from the Fed’s own plan. With its sudden face-planting reversal, the Fed has just proven my claim of many years that we would see the Fed fail as soon as it attempted its end game: “The Fed can never unwind its balance sheet without shifting its entire fake recovery into reverse.”

Part of that claim has been that the Fed’s recovery, as designed, could never become sustainable — as in capable of continuing without endless support from the Fed. It would collapse any time the Fed’s crutches are removed.

It was not just stocks that fell. Housing sales fell as I said they would across the nation every month. They are falling still. I may have been the first in the nation last July to pronounce that the entire US housing market had put in a u-turn and would prove in the months ahead to have entered a protracted decline. (At least, I had not read that call anywhere.) I’ve never thought or said this housing decline will be as bad as last time (though I would not be too surprised if it turns out that way), but it will take a big toll as many other pieces of the economy start to fall simultaneously. The auto market is crashing badly in tandem with housing as I said it would. (I’ve promised I will lay all of that out for you with full support … hopefully this week.)

2018, by everyone’s agreement, turned out to be the worst year for stocks since the Great Recession. It fulfilled my statements that stocks would begin their long crash in January of 2018 (not over yet) and that economic cracks would become apparent to all, starting in retail sales, auto sales, and housing sales.

Anyone who didn’t believe me last summer and remained in stocks ended the year poorer than he would have been if he had followed my thinking about the inevitable impact of the Fed’s planned end game. Stocks are still worth much less than they were this summer even after January’s big bounce. The smart trade would have been to exit stocks entirely last summer and then jump back in at the end of December when the Fed first sounded like it was giving up on its plan of quantitative tightening. (I know I’m glad my retirement accounts did not go for that ride. I made 2% gains during that same period by being in cash — meager, but far better than large losses.) They could have sold high and bought 20% right after Powell pulled back on the unwind at the end of the year to ride the Fed’s bounce to new gains if they wanted to gamble on the Fed’s largesse.

By Fed standards, where changes typically come at glacial speed, the Fed’s hard reversal was stunning. It put Fed credibility at risk, and that is the largest risk the Fed can take because credibility is actually all it has to sell. Lose that, and its money has no value.

The Fed has monetized the national debt forever

The recovery was fake in that in that I don’t call perpetual dependency on artificial life support “recovery.” Suck the Fed’s free money back out of the economy, and you will deflate not just the US economy but the whole global economy, as we saw first in emerging markets when the Fed started its Great Recovery Rewind.

Therefore, I can now say the Fed has just revealed that it has no exit plan that works. This was the plan! It failed. As I’ve always maintained it would. The failure is a fait accompli. However, the Fed has still not fully admitted that. It has not actually stopped rolling off its securities but has changed from autopilot to saying it will now closely monitor things and stop roll-off as soon as it needs to. Almost everyone I’ve read said that means well short of its original calendared

I think the Fed hopes for now that mere talk will be enough to save the flailing market since the market hangs on every word the Fed says. I think it will continue some balance-sheet reduction so long as Jawbone Jerome calms the market with small talk. What I see in the Fed’s January balance sheets is that the Fed only rolled off about $20 billion in US treasuries, so again well below its stated cap. Here is the Fed’s cover explanation of its recent policy changes and its shortfall in reductions. Of course, it attempts to put the very best face on it that it can.

Continuance even at a reduced speed means they still risk an even greater crash. After all, how much worse will its balance sheet reduction go when it happens in the less favorable environment of no new foreign-profit repatriation under reduced taxes and, therefore, under shrinking stock buybacks, under higher interest rates than we had last year, and entering a climate of diminishing GDP with lower forward guidance from corporations for earnings in 2019? From this point forward, whatever they do happens in a time of greater headwinds, as I laid out in my first Premium Post.

Since the Fed barely started rolling off its government treasuries before conceding surrender, we can reasonably conclude the Fed will be rolling them over for a long time to come. What remains to be seen is where we go from here. For now the market is breathing a massive sigh of relief from the peril it feared if the Fed continued to do what it had long promised, but belief in relief without the action of relief will likely give way to reality soon.

That the Fed has effectively hit the end of the road for its roll-off means it has fully (and likely permanently) monetized that much of the federal debt by its own admission as I laid out in my last Premium Post.