By Danielle Sempsrott of NASA – Re-Blogged From WUWT

In an effort to increase the ability to provide astronauts nutrients on long-duration missions as the agency plans to sustainably return to the Moon and move forward to Mars, the Veg-PONDS-02 experiment is currently underway aboard the International Space Station.

The present method of growing plants in space uses seed bags, referred to as pillows, that astronauts push water into with a syringe. Using this method makes it difficult to grow certain types of “pick and eat” crops beyond lettuce varieties. Crops like tomatoes use a large amount of water, and pillows don’t have enough holding capacity to support them.

As an alternative to the pillows, 12 passive orbital nutrient delivery system (PONDS) plant growth units are being put through their paces. The PONDS units are less expensive to produce, have more water holding capacity, provide a greater space for root growth and are a completely passive system—meaning PONDS can provide air and water to crops without extra power.

The 21-day experiment is a collaboration between NASA, Techshot, Inc., the Tupperware Brands Corporation, fluids experts at NASA’s Glenn Research Center and Mark Weislogel at Portland State University. As a U.S. National Laboratory, the space station provides commercial companies and government agencies with the ability to test the experiment in a microgravity environment.

“There comes a point where you have longer and longer duration missions, and you reach a cost benefit point where it makes sense to grow your own food,” said Howard Levine, chief scientist of NASA’s Utilization and Life Sciences Office at the agency’s Kennedy Space Center.

After Levine developed the PONDS prototype, it was passed on to Dave Reed, Techshot’s Florida operations director, and his team to re-engineer and make it capable of withstanding spaceflight. PONDS tested well on the ground, but when the system first arrived at the space station last year for testing in a microgravity environment, it pumped too much water to the lettuce seeds. 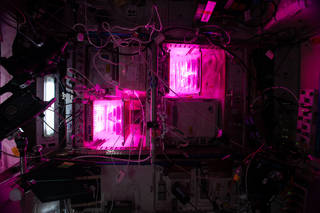 “We took a step back, evaluated different aspects of the design, and together with water fluid experts from NASA, we came up with three alternative designs, each of which had a number of components we wanted to test in space,” said Levine.

On April 19, 2019, the Veg-PONDS-02 payload arrived at the orbiting laboratory via Northrop Grumman’s 11th Commercial Resupply mission, containing 12 PONDS units in the three new design configurations. Six of the units have a clear design to allow researchers to observe the performance of water in the units during the experiment. All units contain red romaine lettuce seeds and have been placed in the two space station vegetable production systems, known as Veggie, to test growth performance.

Reed and his team worked closely with material scientists and mechanical engineers with Tupperware to design and mold components that make up the PONDS-02 units.

“We needed something that was molded well, molded precisely and molded out of plastics that were compatible with edible material,” said Reed. “They brought all this huge body of knowledge to us.”

This experiment is a way to test the performance of the three alternative design methods in space to see if the water management issue initially discovered during the first PONDS experiment has been adequately addressed.

“I look at this as a normal part of the process,” said David Brady, assistant program scientist in the International Space Station Program Science Office at NASA’s Johnson Space Center. “You find what works and what doesn’t work, and you adapt and change it. The fact that Howard and his team have been able to do that is progress.”

On May 16, the final day of the experiment, the plants will be harvested. Six of the PONDS units will be returned to Earth on SpaceX’s 17th Commercial Resupply Services mission for further analysis. Reed’s team will take the successful components and combine them into one final PONDS design, which will pave the way for the agency to truly begin testing the growth capability of crop varieties beyond leafy greens.

“PONDS was an opportunity to do something that no one else has done before,” said Reed. “People have been growing plants in space since the Apollo era, but not like this.”

The Space Life and Physical Sciences Research and Applications Division (SLPSRA) of NASA’s Human Exploration and Operations Mission Directorate at NASA Headquarters in Washington is sponsoring the Veg-PONDS-02 investigation as part of its mission to conduct research that enables human spaceflight exploration.