Skip to content
HomeWill The US Economy Fall Into Recession? Or Will It Accelerate?
By Arkadiusz Sieroń – Re-Blogged From Gold Eagle

The current economic expansion has just equaled with the longest boom in the US history. Is that not suspicious? We invite you to read our today’s article, which provide you with the valuable lessons from the 1990s expansion for the gold market and find out whether the US economy will die of old age.

The current economic expansion has just equaled with the longest boom in the US history. Unless the sky falls in the next few weeks, we will celebrate a new record in July. Is that not suspicious?

Not really. We explained several times that expansions do not die of old age. No one does, actually. When a person is said to have died “of old age” it means that he or she succumbed to one of the diseases common in our later years. Just as humans, expansion ends when economies succumb to one of the negative economic trends common in recession. But as we have analyzed recently, we do not see these recessionary forces in operation: the unemployment rate stays at a very low level, while the yield curve remains positive (the dips below zero in March and May were short-lived). Neither jobless claims nor NBER’s recession indicators, such as real GDP or real income, signal an upcoming economic calamity.

Actually, the GDP is growing at solid rate, while inflation stays low. The labor market is tight, while the stock market rebounded since the plunge in the end of 2018. On surface, the current expansion looks very similar to the previously longest expansion on record of 1991-2001. But the devil is in the detail.

Let’s look at the chart below, which shows the real GDP growth since 1991. As one can see, the pace of economic expansion has slowed down. While in the 1990s, the real GDP was growing at average rate of 3.6 percent, it has decelerated to 2.3 percent in the 2010s. 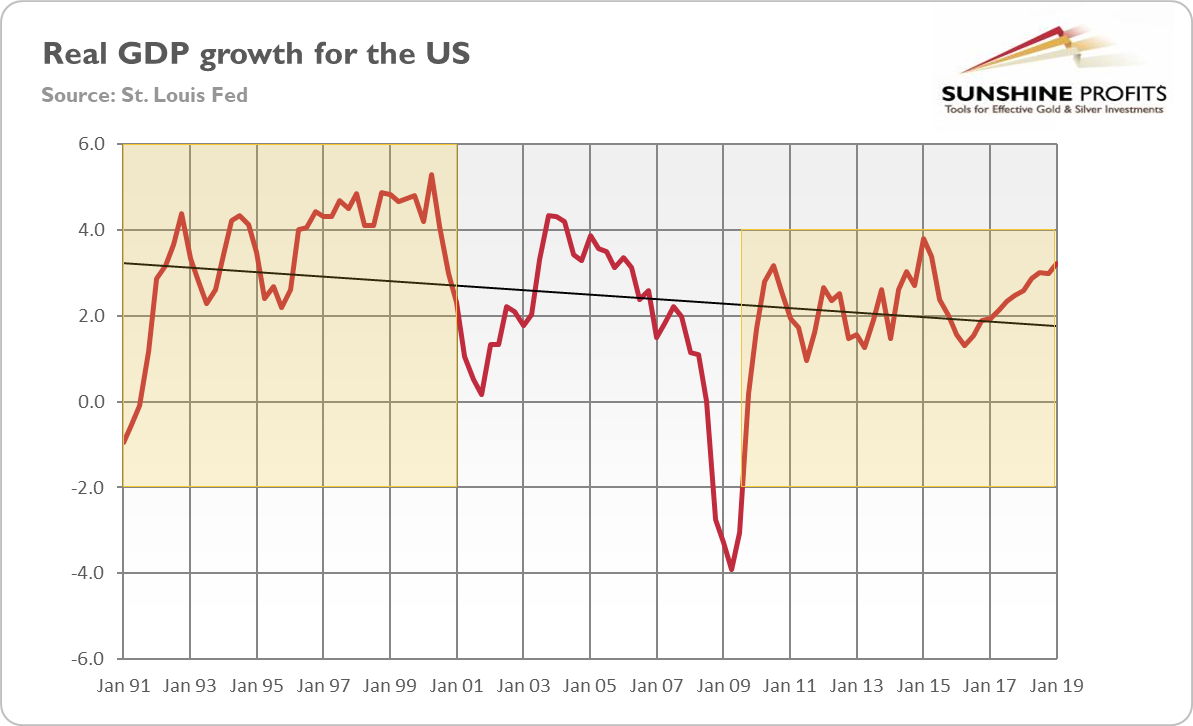 Why the economic growth decelerated? Several factors contributed to this, such as the depletion of the peace dividend after the end of the Cold War and the opening of new markets around the world.

However, the main difference between the 1990s and the 2010s is the high pace of productivity growth in the former period, especially in the latter part of the decade. The productivity was increasing then quickly thanks to the investment in new technologies, mainly computers and software. Meanwhile, the productivity growth after the Great Recession has been subdued – actually it has been so weak that some economists started to talk about the secular stagnation.

Now, we can look at it in two ways. The pessimists could point out that slower productivity growth indicates some inherent problems with the US economy. Without higher productivity, the economic growth will remain sluggish and more fragile, while the current expansion will end sooner rather than later. Music to gold bulls’ ears.

However, there is also an optimistic interpretation. The productivity growth is low, but it means that it could accelerate in the future. Why would it happen? Well, the new technologies always generate productivity gains with a lag. Just think about the steam engine or electricity whose visible impact on the productivity came decades after their inventions. Or take the rapid development of the information technology in the 1970s and 1980s – the productivity jump came not earlier than in the 1990s. As Robert Solow famously said in 1987, “You can see the computer age everywhere but in the productivity statistics.”

Similarly, some economist argue that we are in the middle of a next technological revolution – just think about the artificial intelligence, machine learning, robots, big data, the Internet of Things, autonomous vehicles, 3-D printing, energy storage, etc. – which will soon fuel the productivity jump. Moreover, the US labor market is very tight. It should force companies in the near future to utilize their workers better. If that happens, the current expansion will continue, or even the growth will accelerate. Anyhow, the Goldilocks economy will preserve, making the gold bulls cry.

Who is right: the pessimists or the optimists? We believe that, in the medium term, the latter (in the long run, given the level of debt in the economy, we are less optimistic). Please look at the chart below, which paints the labor productivity growth in America. As one can see, in the 2010s, the growth in output per hour worked has been much weaker than in the 1990s. 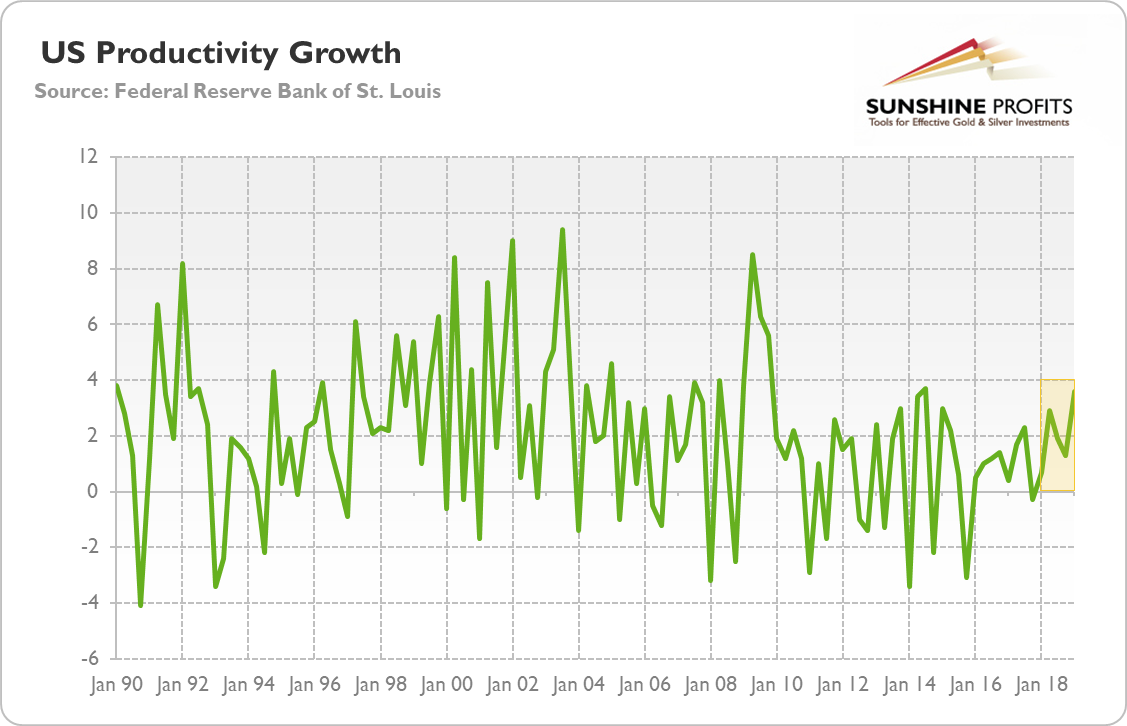 But the recent data suggests an improvement. In the first quarter of 2019, the productivity soars 3.6 percent, the fastest pace since the fall of 2014. If this upward trend remains in place, the US economy could grow faster without fueling inflation. Not the best situation for gold.