Skip to content
HomeThe Journey, Not The Destination
By GE Christenson – Re-Blogged From Gold Eagle

From Ralph Waldo Emerson: “It’s not the destination, it’s the journey.”

His insight applies in life, investing, analysis, the S&P 500 Index, gold, silver and others. Consider these examples.

You have $10 million to invest in a business and are searching for a manager. CEO #1 and CEO #2 have both amassed a personal fortune over $100 million. Which one do you choose?

CEO #1 built three companies over the past 30 years and grew revenues and profits most years. S/he built a loyal customer base and stockholder equity.

CEO #2 ran three companies into the ground, escaped through bankruptcy and then won $120 million in the Powerball lottery.

Both have a large personal fortune, but CEO #1 looks like a better manager.

How you arrive at your destination is important. It is path dependent.

SO WHAT? SHOW ME! 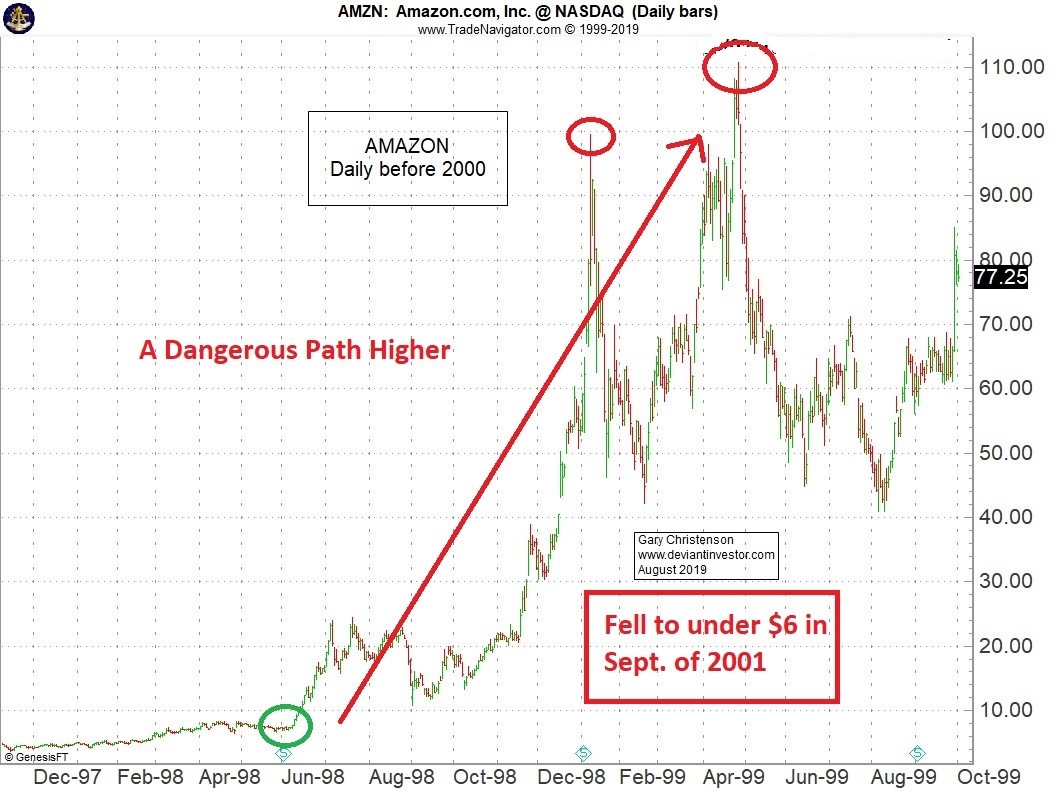 The upward path was not sustainable. Amazon stock crashed after the “Dot.com” bubble and fell over 90% during the following two years. It then rose to over $2,000 by 2018. What happens next to this high-flying stock? 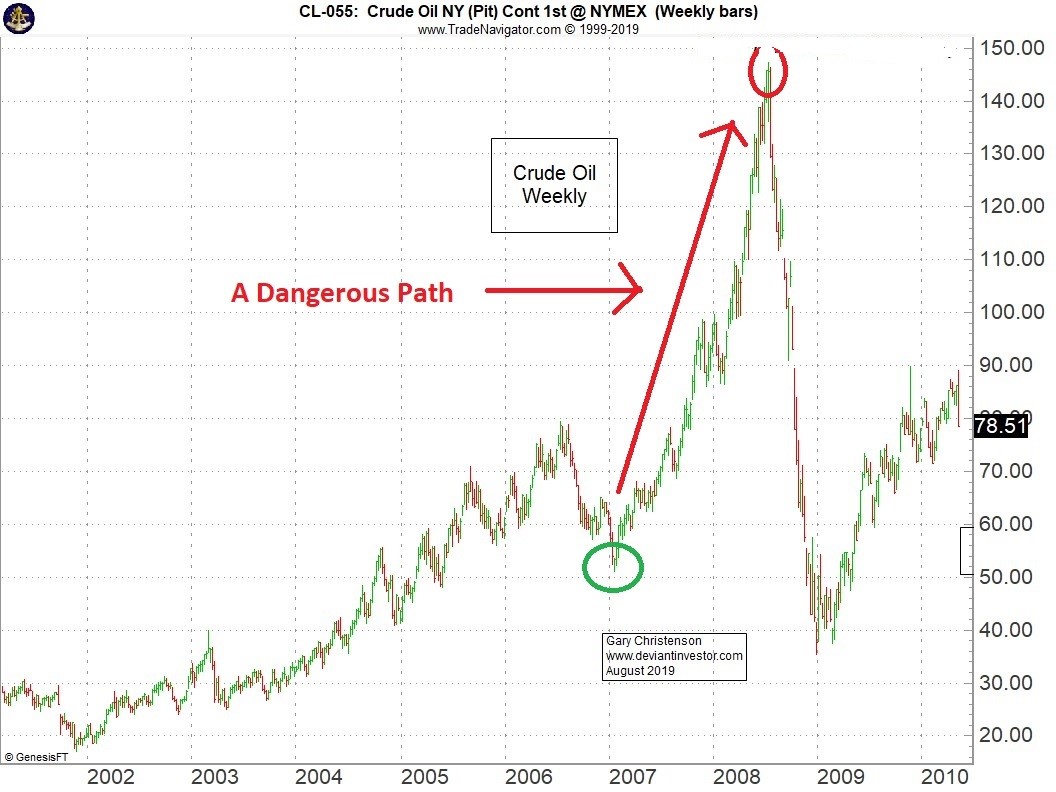 The upward path was not sustainable. Crude oil prices crashed to $36 five months after its bubble high. 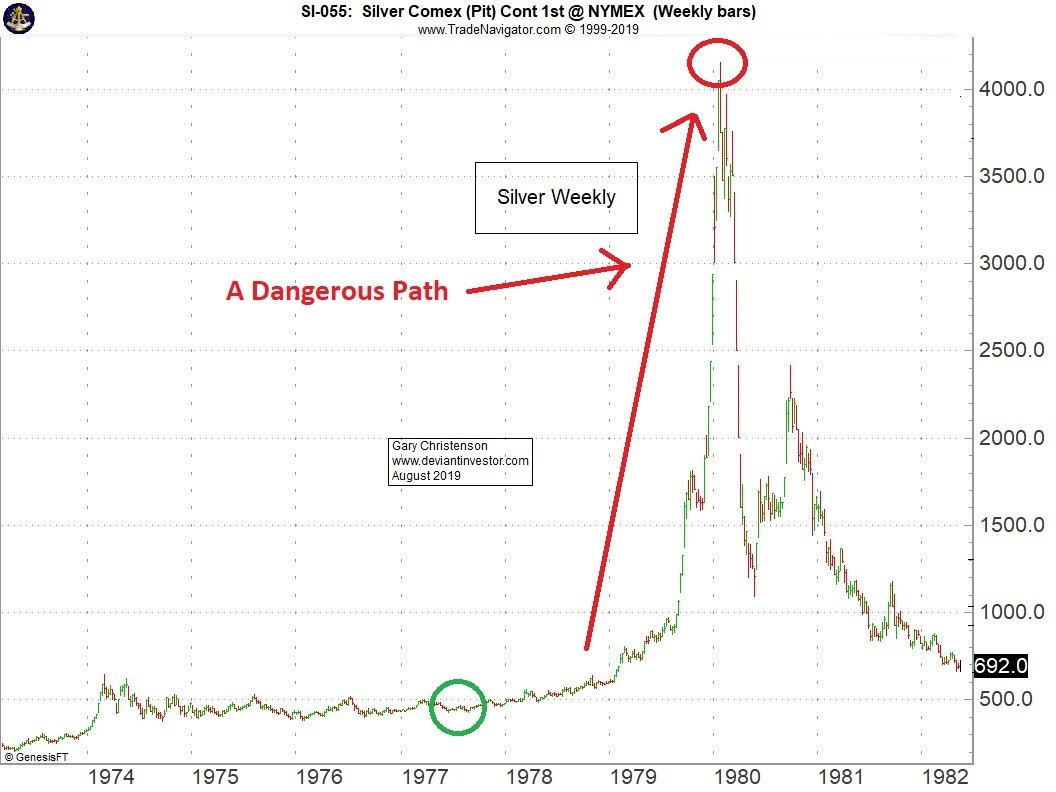 After the bubble peak, silver crashed to under $11 in five months. Blame the Hunt Brothers, blame COMEX, blame manipulation by Wall Street, blame whatever, but $50 in 1980 was unsustainable. Silver prices for the paper contracts on COMEX fell to a low of $3.51 over the next 20 years.

The paths to highs and lows are important. The above are a few of many unsustainable price advances and declines. 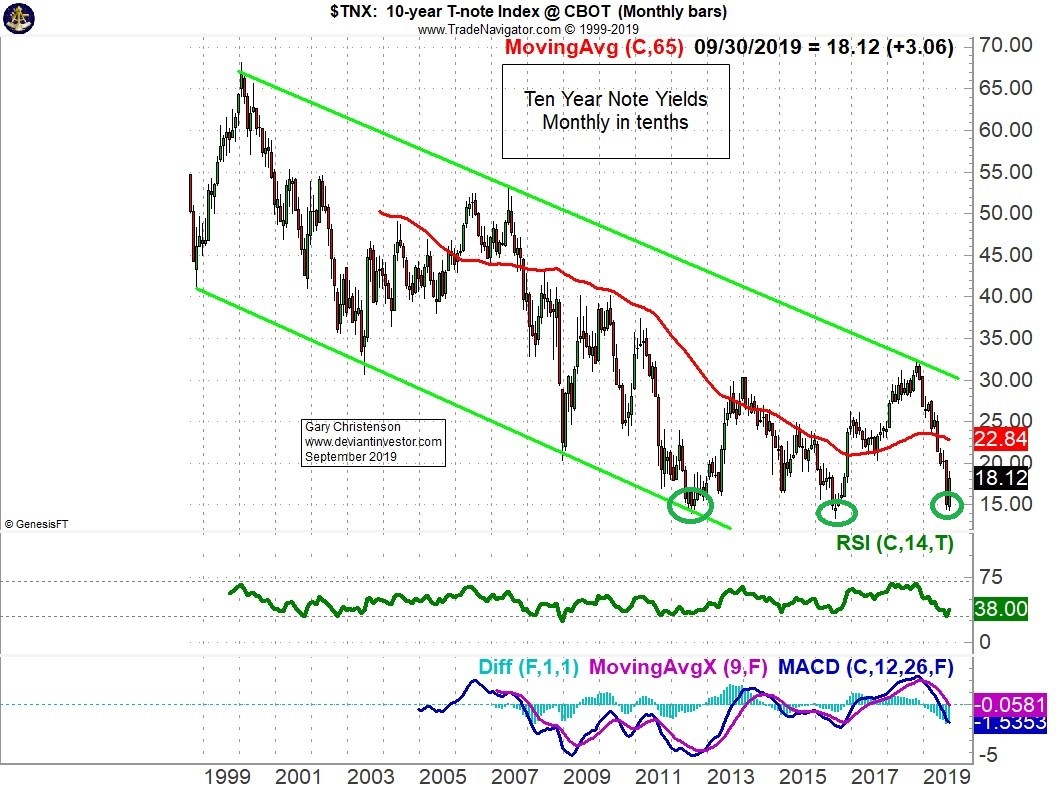 Bond yields rise and fall but the long-term trend has been down for years. Will 10-year yields and mortgage rates fall further or is this a triple bottom?

Over $15 trillion in global sovereign debt now “pays” negative yields. This is crazy, but profitable for the front runners who assume central banks must lower yields and increase the value of those fiat-debt bonds.

The 100-year Austria bond is another example. Large paper profits for a few resulted from buying those bonds. However, the chart of the bond looks like the three unsustainable rallies described above. 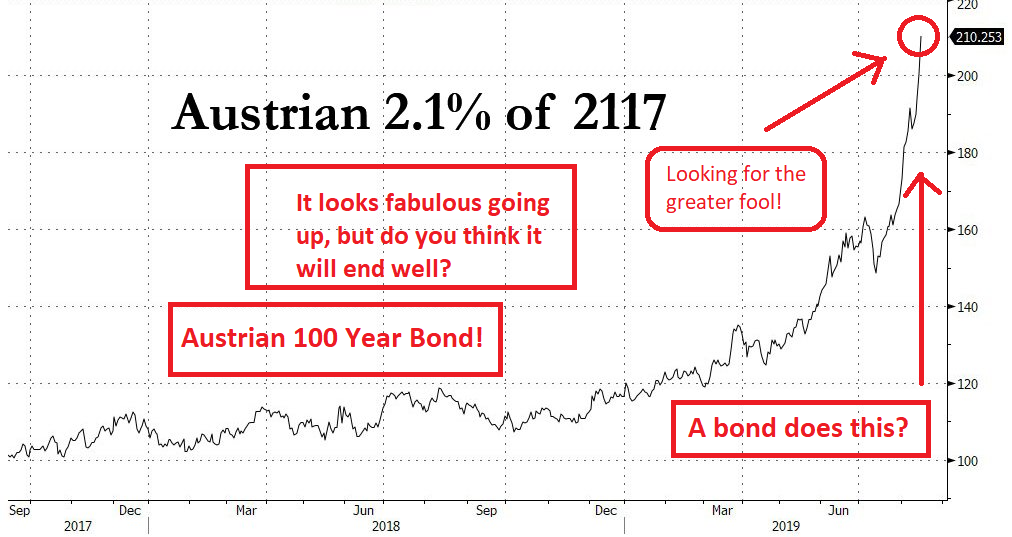 Will bond yields continue lower or will bonds crash and drive interest rates higher? Intelligent analysts argue both sides of that debate. We prefer to avoid the subject and look at something that makes sense.

WHAT MAKES SENSE IN THIS CRAZY WORLD?

San Francisco has declared that such words as “offender” and “addict” are no longer acceptable. A “convicted felon” will become known as a “justice-involved-person” or a “formerly incarcerated person.” A juvenile delinquent will now be called “a young person with justice system involvement.”

Examine the long-term chart of silver and note its 200-week moving average. 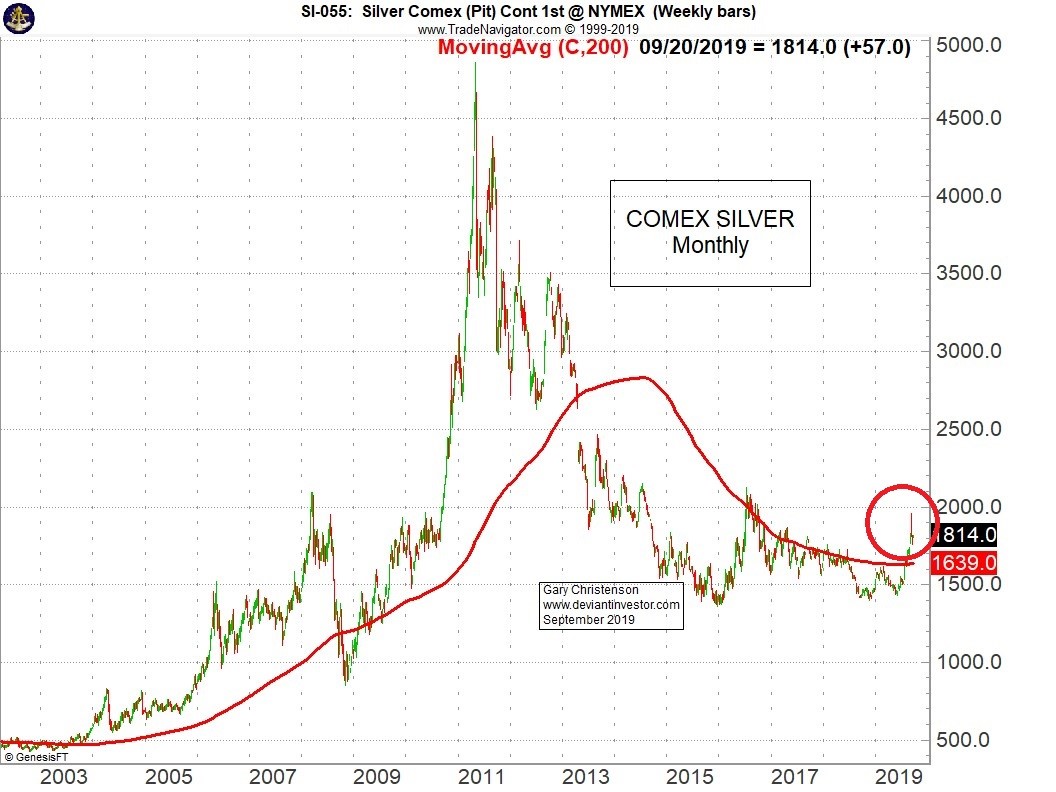 For contrast, examine the long-term chart of the S&P500 Index and note its 200-week moving average. 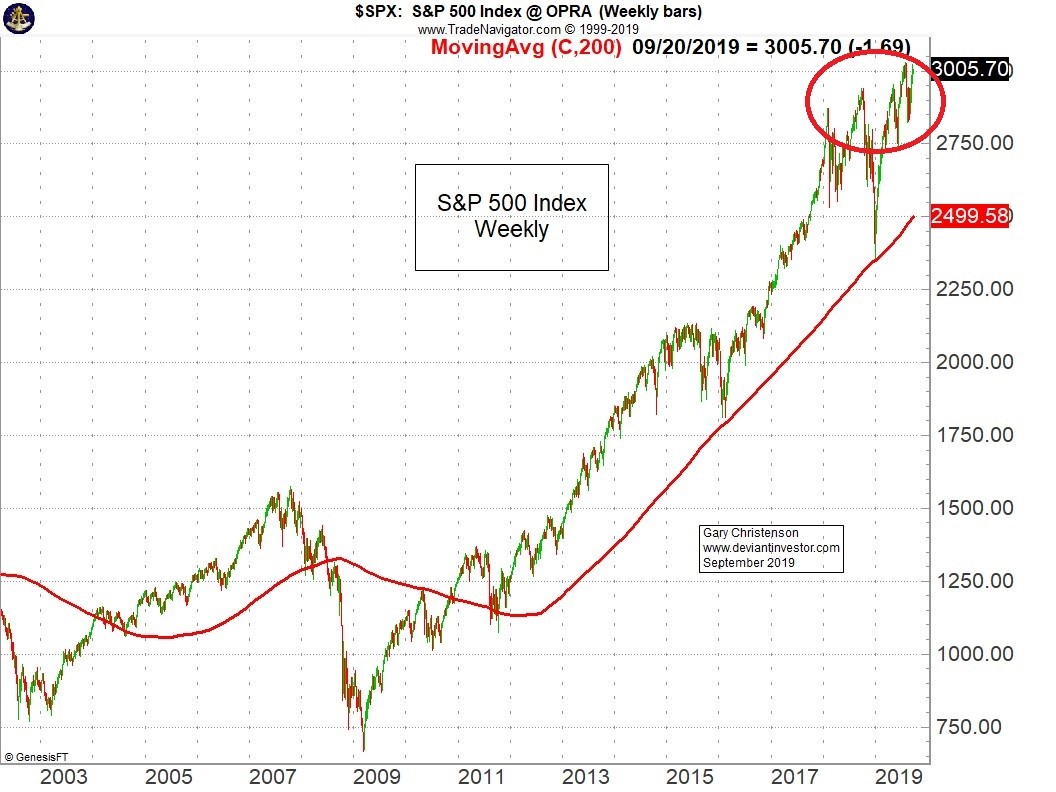 Markets are path dependent. Both silver and the S&P will move higher as governments and central banks devalue digital currencies and levitate stock and bond markets, but which market has more potential to rise higher?

ANSWER: Silver prices are a few percent above their 200-week moving average but have been below the average mostly since 2013.

The S&P might not crash until after the 2020 election. But is that a healthy bet given recent market action, trade wars, tariffs, currency wars, shooting wars, negative interest rates, extreme leverage, corporate debt, under-funded pensions, over $22 trillion in official national debt, unfunded liabilities of $100 – $200 trillion, and the plethora of economic, social and political nonsense that bombards us every day?

From David Morgan: “This is the real move in gold and silver.”

Or you can buy a bond that yields next to nothing and will repay you with devalued currency units.

The path is important. There is little point in becoming a billionaire if billion-dollar bills are less valuable than toilet paper.